The Philadelphia Fusion will not be competing in the pre season exhibition matches of the Overwatch League citing player logistics issues. A series of tweets by the team’s official Twitter account read:

Due to player logistics issues the Fusion will be absent from OWL preseason matches. Preparations for the regular season remain on track, as our players and coaches from 10 nations continue to scrimmage and work hard (1/2)

(2/2) We apologize to our fans in Philadelphia & around the world who were looking forward to our preseason competition. Please stay tuned for news surrounding opportunities to connect with our team and win Fusion gear in advance of our season opener on January 11th.

Featuring one of, if not the most diverse group contesting in the Overwatch League, Fusion is represented by players and coaches from United States, South Korea, Israel, Russia, France, Finland, United Kingdom, Canada, Spain and Sweden so such logistical issue isn’t surprising. However, the fact that Fusion still fail to meet the minimum requirement of six players to contest in the upcoming pre season round of matchesÂ  does send alarm bells ringing. 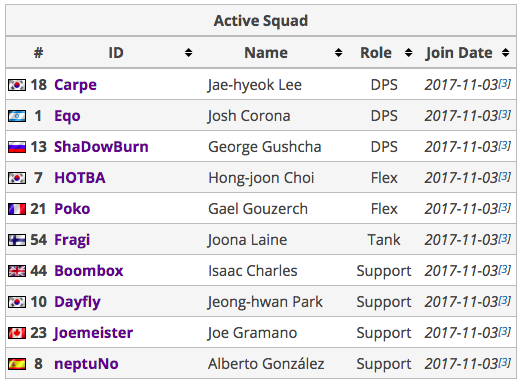 In response to that, the Overwatch League released an official statement which read:

“For the first match of day one of the preseason, on Wednesday, Dec. 6, at 4 p.m. PST, the San Francisco Shock will take the place of the Philadelphia Fusion, facing off against the Florida Mayhem. Replacement teams for subsequent preseason matches which may have featured the Philadelphia Fusion will be announced during the tournament.”

Even before the Overwatch League kicks off, Fusion have been caught on the wrong end of the news for several reasons including releasing the worst player reveal video, being one of the last teams to finalize their roster and having one of their players, SADO suspended for partaking in activities related to ‘account-boosting‘.

Following their withdrawal from the pre season, Philadelphia Fusion’s first match will be against the Houston OutlawsÂ on January 12th 2018.

We hope that this is the last of the pointless issues surrounding the Fusion team which we feel has one of the deepest talent pool in the Overwatch League and may very well be the dark horses in the inaugural season. For all news, analysis and coverage of the Overwatch League, stay tuned to Kakuchopurei.com

Female gamers are often chastised for not being 'real' gamers, whatever that means. However, statistics have proven otherwise, and there are a lot mor...

Malaysia-based Centaur Games is best known for their POLITIKO: The Card Game Of Malaysian Politics, which has also been adapted into a mobile game. No...

The Epic Games Store (EGS) began 2020 with War, Death, and rad slopes! It's going to be hard to follow up to that but it looks like the next EGS free ...