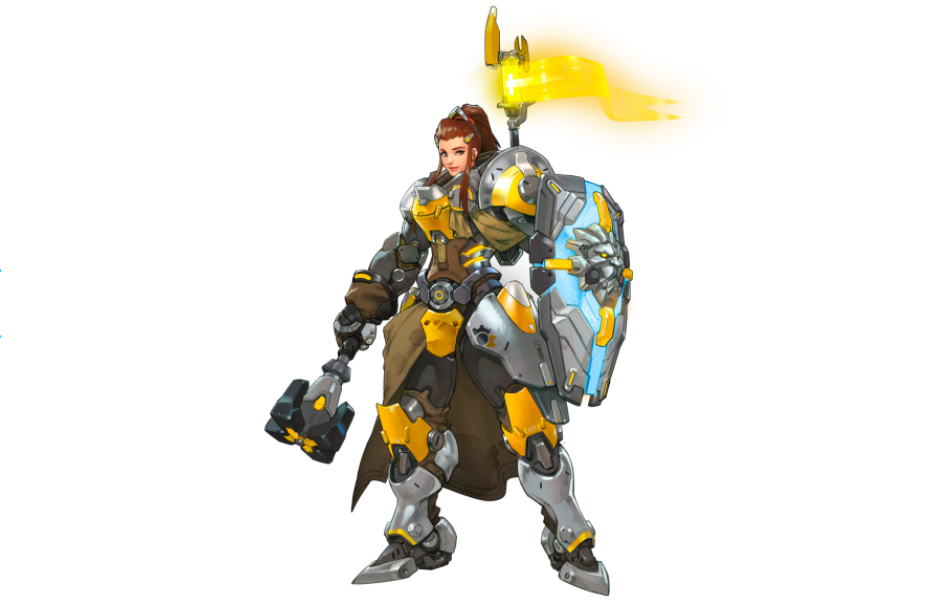 Addendum: The earlier version alluded to the speed boost from Rally which affects Brigette’s teammates. It does not. It only affects her, while also granting extra armor to her team.Â

The latest Overwatch hero, the support-tank hybrid Brigitte (Brig-et-uh) Lindholm was unveiled earlier today so we decided to analyze her kit and come up with potential combos utilizing her abilities. The daughter of Torbjorn who grew up to be Reinhardt’s squire, Brigette is a very unique character whose kit affects everyone around her, and creates a new dynamic in the tank – support relationship. Does she negate the selection of any main tanks or primary healers? Only time will tell.Â Before we head any further, here’s a quick recap of her kit courtesy of Gamepedia.comÂ to get you up to speed.

With that out of the way, let’s head to the meat of this analysis – how can her Ult move, ‘Rally’ be utilized with other heroes’ ults. All aboard? Ok cool. Let’s get straight to it.

Time for Beyblade 2.0! While this is still a way off from the original Beyblade Ult combo where Reaper also gained a momentary speed boost thanks to Ana’s ult, the addition of extra 45 armor per second adds survivability to an Ult-ing Reaper.Â  This move is probably useful to clear the space off enemies, especially on control maps. Messes up the ult economy but man – imagine the fireworks.

The combination with the ranged, burst healing and damage output from Moira allows a very potent penetrating force, especially to get past a chokepoint, or breaking down entrenched defenders. When timed properly, allows an extended push up to 15 seconds that could be the choice move during the final pushes in tight spaces such as Route 66 and Dorado.

Genji’s ultimate, while one of the deadliest moves in the game, is akin to a glass cannon. With Brigette’s ult, he’s now more durable and is less likely to be shot down during cast. A tankier Genji is harder to kill, allowing him to be less conservative in picking out his targets. The AOE effect from Brigette’s Rally also adds survivability to her teammates making this combination potentially the new sure-win move.

While Primal Rage is one of the most devastating ults in the game, Winston usually ends up isolated due to his added mobility. Rally adds mobility allowing Brigette to catch up and aid Winston while the rest of the squad scurry make ground. In the commotion, Brigette’s Whip Shot comes with a knock-back effect that displaces enemies, delivering similar effect to Winston’s juggling act as well.

Roadhog’s Whole Hog not only turns him into a death machine, it also converts him into a bullet magnet as everyone on the enemy team tend to focus on him during this short period. Very rarely we see Roadhog survive a full Whole Hog move and utilizing Lucio’s Sound Barrier just to keep him alive is too costly in the grand scheme of things. The armor gained from Rally makes this a better option to win smaller team fights, while conserving Transcendence and the aforementioned Sound Barrier for bigger, more important ones.

Just like Genji, Pharah’s ult turns her into a glass cannon who is usually shut down immediately or midway through her ult. Added armor means that an ulting Pharah have a higher chance of emptying her rockets as intended instead of dying mid-cast.

With a maximum of additional 150 armor to any team member with full health, popping up the Shield Generator (+75 armor) grants a total of 225 armor on top of health so imagine how even the squishiest of characters are suddenly bullet sponges. We would not want to face a Pharah with 425 total health. We really don’t.

These are of course, only in theory and how they actually translate to the battlefield is another matter. Think you have a better combination? As usual, the comments section is right below.

by Is Blizzard Teasing A Diablo III Port For Nintendo Switch? – KAKUCHOPUREI.COM in March 3, 2018
Reply

[…] One does wonder if D3 will be ported onto other consoles, especially on Nintendo’s new Switch console. Here’s a recent Tweet from Blizzard to further tease fans, right after their megaton PTR release of Overwatch’s Brigitte. […]