As we complete week 2 of the matches, we get a better understanding as in where these teams stand in the grand scheme of things. How good are the Titans? Is the San Francisco Shock overrated? How’s that for a first win, eh, Shanghai?

Before we go any further, here are the full results of Week 2: 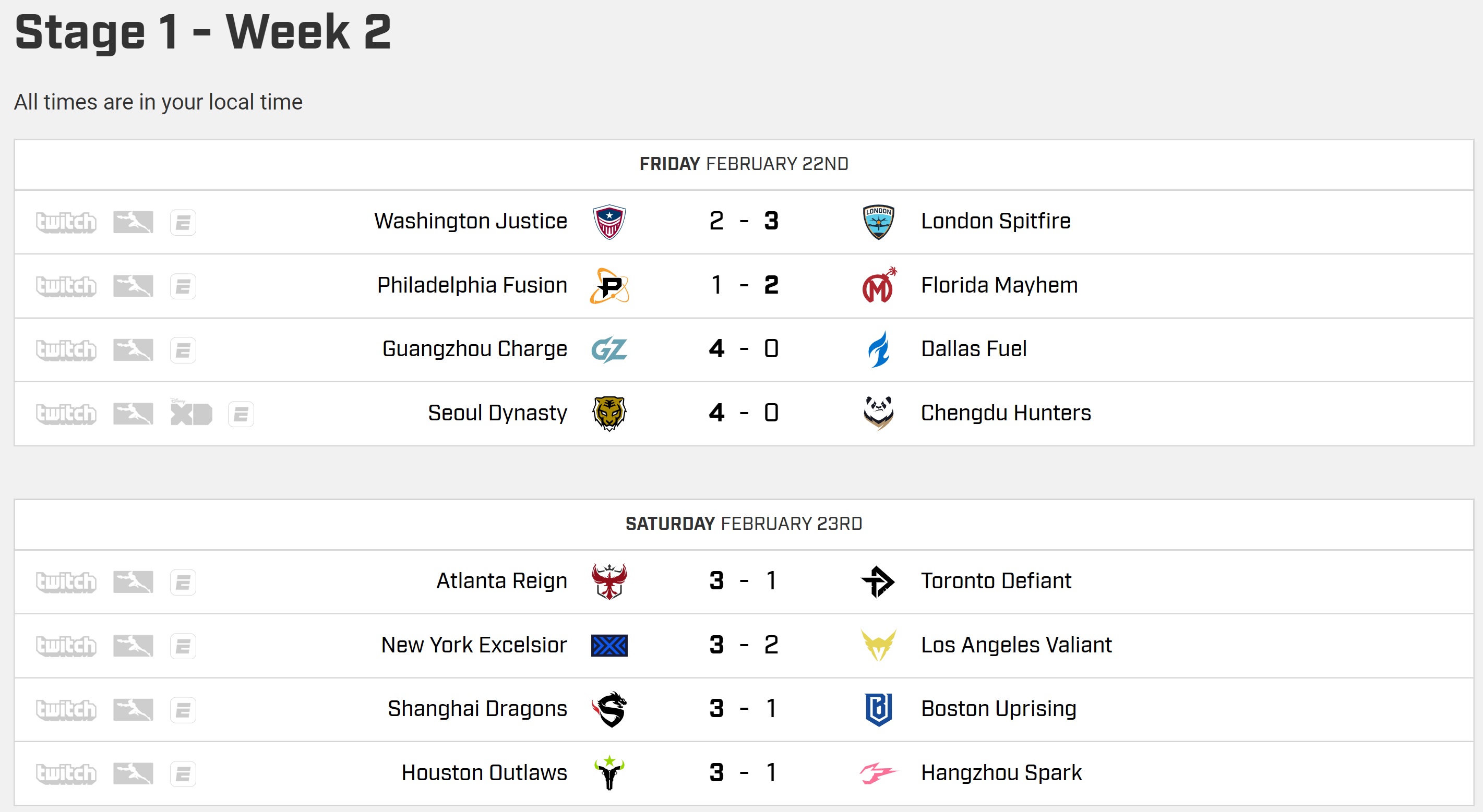 Shanghai Cracks the Egg. But How Long til Win #2 Comes Knocking?

One of the biggest stories coming out of Week 2 most definitely be the Shanghai Dragons’ win over the Boston Uprising which ended their 42-game losing streak. The 3-1 win, while celebrated by everyone who follows pro-Overwatch (including this paid actor at 0:26 who was supposed to be rooting for the Uprising), should be taken with a fistful of salt considering several factors which contributed to it.

Boston -who lost Gamsu to the Dragons (Hollywood couldn’t have written a better plot, to be honest) – didn’t get to play with their preferred tank, Fusions, due to red tape issues and fielded Axxiom instead.

Now, we aren’t taking anything away from the Dragons’ win, but we felt it was more due to a combination of several factors which favoured them rather than an outright win. Nonetheless, they’ve come a long way to be where they are right now and we are proud of them. But let’s be real and set logical expectations on where they stand.

Lucky them, their next match is another winnable one and if things go their way, Chengdu Hunters will be the next team to suffer the ignominy of losing to Shanghai Dragons.

We know they are good, but never thought they’d be this good so early on. Many perceived their 4-0 win against Shanghai in Week 1 as being a formality and their true test comes in Week 2 against the Charge and Shock – and the Titans passed with flying colours. They showed that they can hold their nerve over five maps in their 3-2 win over the Guangzhou Charge and pulled off a spectacular performance in brushing aside the San Francisco Shock 3-1 to maintain a perfect record heading into Week 3.

The Titans have a very favourable schedule in Stage 1, with only Paris Eternal being a potential stumbling block. If they can maintain this level of performance, we would be very surprised to see them notch anything less than a 6-1 record.

Will the REAL San Francisco Shock Please Stand Up?

A lot has been said about the San Francisco Shock come the end of Week 2. Are they that good, or have they been mediocre at best? Overwatch League caster, MonteCristo, summed it as;

You can make a strong argument that Shock are the #2 team in the league given NYXLâ€™s soft schedule.

I like Monte but how right is he? Let’s see. The Shock’s record in Season 2 to date are:

We may have been guilty of getting over-excited for the Shock in last week’s piece as we saw promise in this DPS-heavy squad. But as it turns out, they are still a long way off once pitted against one of the better teams in the shape of the Titans.

Winning 4-0 over a clearly out-of-sorts, grossly unstable Dallas Fuel in the opening match doesn’t mean much. They then lose out in five maps against an under-strength Gladiators and lost soundly to the Titans. True, the NYXL had a very soft schedule to start the season but that does not hide the fact that the current Shock belongs nowhere near top 10, let alone, top 5 in the league.

Six out of the top ten teams in the league standings are newcomers to the league which is unprecedented. Of course, many expected the Vancouver Titans to be somewhere up there amongst the top-5 but no one thought they’d be joined by the likes of Atlanta Reign, Paris Eternal, Toronto Defiant and *gasp* Chengdu Hunters.

Goes to show that it’s a whole new ballgame in Season 2, and that past successes don’t mean jack if your team can’t master the meta. Of course, this scenario won’t last forever and you’d be wise to expect some movements near the end of the season.

However, the key takeaway is that the gulf between newcomers and old-timers of the OWL is almost nonexistent and that we have started seeing dominant teams from Season 1 starting to tall on the wayside. We’re looking at you, LA Valiant & Outlaws.

Feature
We Talk To E1 Championship Season One Champion Aleef Hamilton About His Aspirations, Rivals & More

A few months ago in June 2021, the E1 Championship Season One came to an epic close when Singaporean sim racer Muhammad Aleef Hamilton and his team, T...