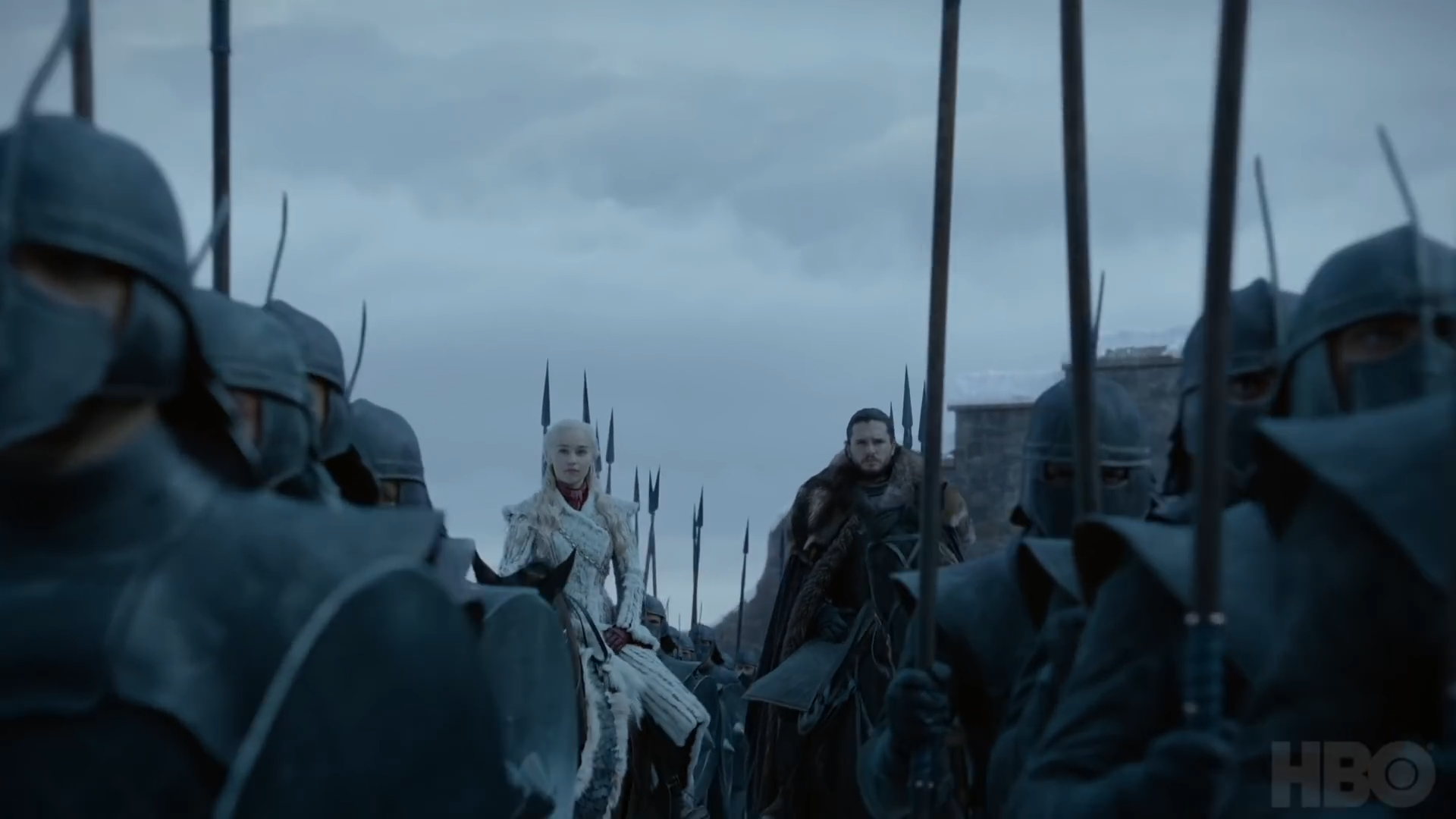 The first full-length trailer for Game of Thrones season 8 has arrived, one month ahead of its upcoming premiere on 14 April 2019. The new trailer for the final season of HBO’s fantasy series sets the stage for an epic finale, the likes of which has never been seen in the history of television. It arrives hot on the heels of a short teaser which released earlier in January 2019.

The trailer begins with Arya Stark frantically running from something or someone in what looks like the crypts beneath Winterfell. Her voiceover sets the tone for the entire trailer: “I know death. He’s got many faces. I look forward to seeing this one.” she says while holding a dragonglass dagger in hand.

The next scene sees the Greyjoy fleet transporting the mercenary legions of the Golden Company from across the Narrow Sea to Westeros. Back in season 7, Cersei Lannister commanded Euron Greyjoy to recruit them for an as-of-yet uncertain purpose.

Bran is with Samwell Tarly, as he says, “Everything you did brought you to where you are now.”

Meanwhile, Cersei is seen with the Mountain and Qyburn by her side at King’s Landing.

Daenerys, Jon Snow, and the Unsullied march to the north.

About the Night King and the white walkers, Jon says:

Gendry prepares the weapons and armor needed for the fateful battle.

Ser Jorah Mormont looks forlorn in the face of the oncoming battle.

Jaimie Lannister screams amidst what will probably be almost insurmountable odds.

It’s The Hound. Cleganebowl, anyone?

Tyrion appears at the end of the trailer.

There’s still much that we don’t know about the final season of Game of Thrones. What we do know is that it will contain only six episodes, one of which will feature the longest cinematic battle in history.

Miguel Sapochnik, who directed GoT episodes ‘Hardhome’ and ‘Battle of the Bastards’, claimed in an interview withÂ Entertainment Weekly that the Battle of Winterfell featured in Game of Thrones season 8 will be even bigger than The Lord of The Rings: The Two Towers’ iconic Battle of Helms Deep sequence.

Game of Thrones will certainly change the very definition of the epicness when it premieres next month.

For those who miss it on TV, it will also be available on HBO On Demand (via Astro Go). Every subsequent episode will premiere on Monday at the same time stated above.

WWE 2K20 Socials 'Taken Over' By AEW In Apparent Hack

by These Game Of Thrones Adidas Shoes Are Too Cool For White Walkers – KAKUCHOPUREI.COM in March 12, 2019
Reply

[…] In the meantime, check out my breakdown of the latest Game of Thrones Season 8 trailer here. […]

by Game of Thrones Behind The Scenes Documentary To Air After Season 8 Finale – KAKUCHOPUREI.COM in March 28, 2019
Reply

[…] the meantime, check out my breakdown of the latest Game of Thrones Season 8 trailer here, or rewatch it below to tide you over until the new season eventually […]

by Revisit Game Of Thrones Before Season 8 Arrives With The New HBO GoT Pass – KAKUCHOPUREI.COM in April 5, 2019
Reply

[…] the meantime, check outÂ my breakdown of the latestÂ Game of ThronesÂ Season 8 trailer here, or rewatch it below to tide you over until the new season eventually […]

by Go Westeros: Where Are The Characters At The Start Of Season 8? – KAKUCHOPUREI.COM in April 10, 2019
Reply

[…] In the meantime, check out my breakdown of the latest Game of Thrones Season 8 trailer here. […]