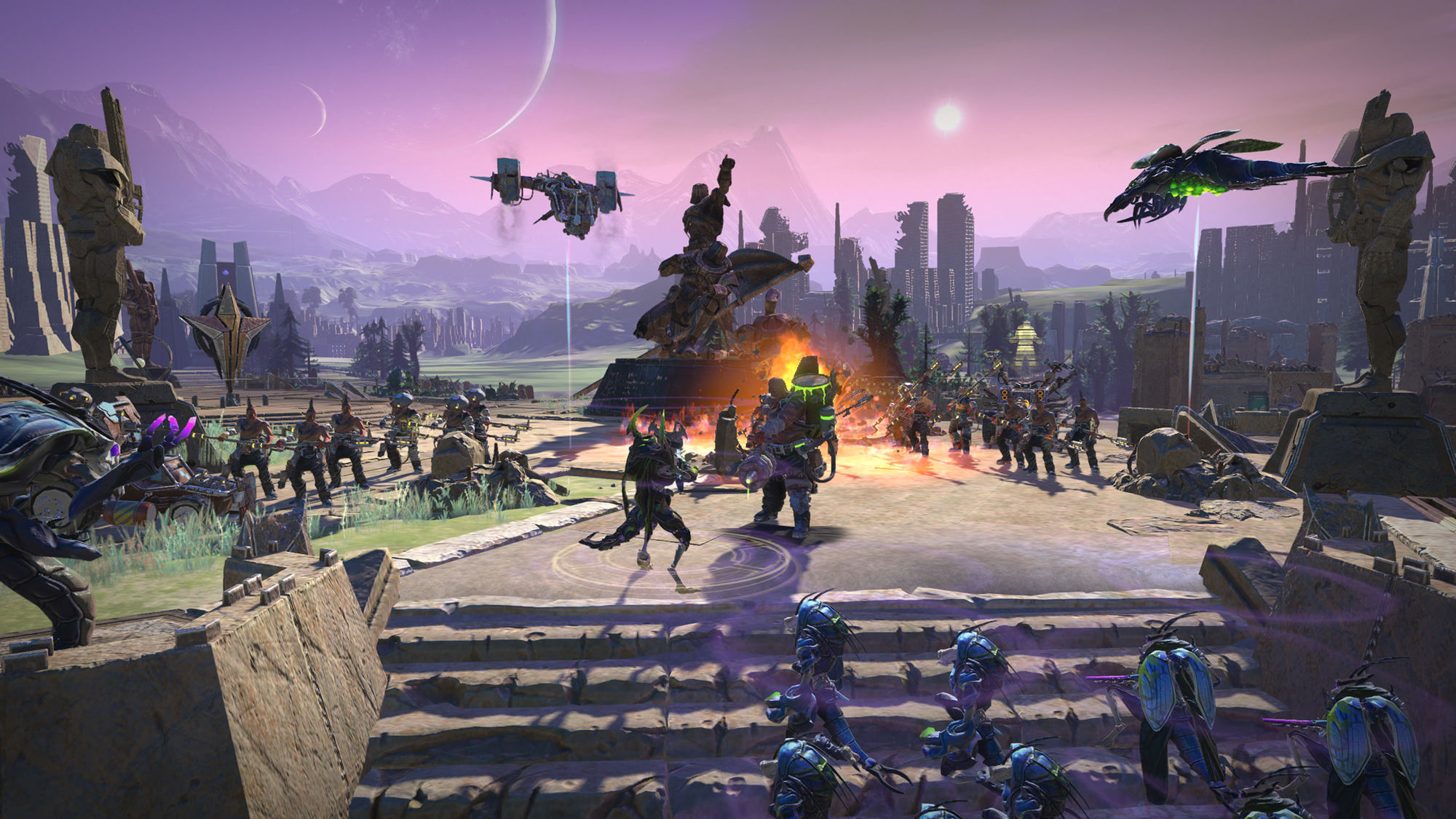 If you’re into fast-paced 4X games with tactical turn-based XCOM-style combat, you may want to give Age of Wonders: Planetfall a shot. The Age of Wonders series is from Triumph Studios who usually take the spreadsheet aspects of a 4X genre title and turn it upside its head. In this case, they’ve succeeded by using a sci-fi coat of paint and more.

If this is your first time playing an Age of Wonders game, just think of it like Civilization series: you land your dropship and establish your first city, research new technologies, explore and inhabit the surrounding areas, and fortify your military so that you can protect yourself. Or conquer. Win conditions include either eliminating other factions via war or complete a world-altering achievement.

Play the game a little longer, and you’ll see this game is similar to classic turn-based strategy title Heroes of Might & Magic where you have unique heroes and armies who grow with you as you play the game.

They learn new skills and can even be upgraded to use new weapons on the battlefield. Said heroes are all from different factions that offer different playstyles. Heck, if you don’t plan ahead, you may be stuck with a bad decision and an inefficient build for hundreds of hours.

And that’s the beauty of Age of Wonders: Planetfall; it gives you a lot to work with that will make you think for hours on end. You get your pick between six races ranging from the dwarf-like earth-savvy Dvar to the insectoid Kir’ko that can control the opposition’s minds with their psionic powers. Whether you’re into assimilating the corpses of your foes like the Assembly or straight-up aggressive with your approach like the Vanguard, your choice of race will complement and affect your playstyle to a tee. When you set up your city, you also need to factor in secret tech research like biological warfare and teleportation. And also your on-map hero’s perks that either help you in combat or give you passive resource bonuses.

Taking Turns Hitting Each Other

Remember when we said X-COM style combat early on? Conflict is resolved with a turn-based system where your main hero and his/her army attack and/or defend whatever enemies they come across. You can have your commander deal the brunt of the damage while using your Dvar Trenchers to build a protective barrier for a defensive backline. But keep in mind that area-of-effect attacks can deal friendly fire, so positioning matters. You’ll have to earn your victories with some deft use of your units and commander abilities because these fights can get tough if you go into them without so much as a plan.

When you get deeper into your campaign, you will be introduced to a huge number of variables to shake combat up. These include special units that can resurrect units or straight-up wreck weaker infantry, or game-turning Operations that act like the game’s equivalent to spellsÂ  (ala past Age of Wonders titles).

All in all, the combat aspect of the game can be the most fun whether you’re attacking or defending.

When you’re playing games like Civilization VI, you usually wait for your turn moving your scouts around, or just wait until your 10-turns-to-build structure or research tree is developed while everyone else is moving their scouts. While there is that going on in Age of Wonders: Planetfall, the cadences of building and researching are reduced, and there are a number of side quests you can complete when moving your commander and scouts around the map that net you extra resources. Whether you’re exploring an old ruin filled with Assembly units to kill or a diplomatic mission, you’ll be reaping in the rewards to speed up your building and end goal by a bit.

The game also improves a number of things in 4X games, like late-game speed-up and tweaks that let other opponent AI combat go by like a quick breeze, or a simple-yet-effective diplomacy setting that doesn’t lead to random180 degree personality turns from the opposition. It would be nice if the game had a decent interface to work with since; it’s not the worst but it could be a bit more in-your-face and less unwieldy at times. Though to be fair, it doesn’t get in the way of the rest of the game’s aesthetics and detailing.

And while the rest of the game can get overwhelming, Age of Wonders: Planetfall at least introduces its main mechanics step by step while also speeding things up with its new approach to 4X gameplay. Its Civ-Meets-X-COM plus sci-fi formula completely works and is a joy to play and experience for fans of the genre.

Cyberpunk 2077's Johnny Silverhand Is Getting The Hot Toys Treatment