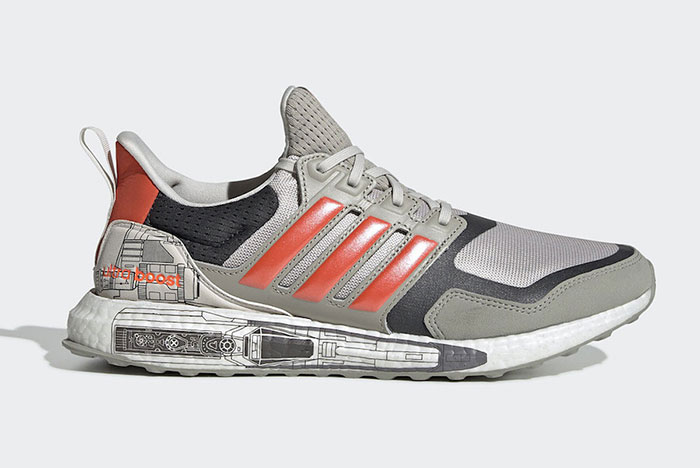 Leaked pictures (via SneakerFreaker) have revealed that a special edition set of Adidas Ultraboost shoes will be released to commemorate the upcoming Star Wars Episode IX: The Rise Of Skywalker in December 2019.

The design of the new Adidas Ultraboost shoes is based on the iconic X-Wing starfighter from the franchise, specifically the new Resistance version from the Sequel Trilogy of films that started with Star Wars Episode VII: The Force Awakens.

The top of the shoe is covered in grey tones accompanied by orange accents on Adidas’ Three Stripes. The unique X-Wing details can be seen on the heel counter and the white BOOST sole, along with a Jedi Order emblem.Â Star Wars fans will also appreciate that the phrase â€˜The Force Will Be With You Alwaysâ€™ is printed on the heel stripe.

Adidas has yet to officially announce the release date of these Adidas Ultraboost Star Wars X-Wing shoes. Stay tuned on Kakuchopurei for future updates. In the meantime, check out the kicks in all its glory below.

Personally, I’d go for the First Order shoes, which was leaked by a Twitter user below.