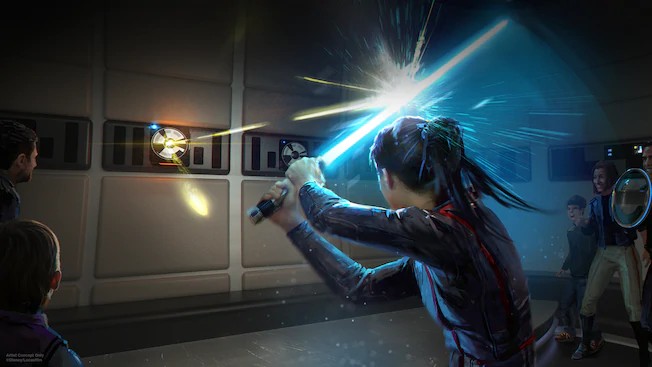 Ever wanted to experience an authentic hotel set in a galaxy far, far away? Soon, you will.

Walt Disney Imagineering has announced that the Star Wars: Galactic Starcruiser will officially open in 2021 at Walt Disney World Resort in Florida, USA. This is a type of immersive vacation; consisting of a two-night cruise-style itinerary where visitors will become the hero of their own adventure in an experience that surrounds you 24/7 in an authentic Star Wars setting.

The concept art renders below depicts what visitors will see when they first arrive at the Star Wars: Galactic Starcruiser hotel.

From the Starcruiser Terminal above, visitors will then enter an exclusive launch pod for travel up to the Halcyon, the starcruiser. Through the podâ€™s viewports, it looks as though they are travelling through space to approach the massive ship that is much too large to land on any planet.

A â€œspaceport of callâ€ to Black Spire Outpost is included in the Star Wars: Galactic Starcruiser itinerary, where special passenger transports take visitors to the planet Batuu, also known as the destination for Star Wars: Galaxyâ€™s Edge at Disneyâ€™s Hollywood Studios.

To get from Star Wars: Galactic Starcruiser to Star Wars: Galaxyâ€™s Edge and back, visitors will remain fully in-story as they step aboard transport ships, which you can see in the artist concept rendering below.

These transport ships will then connect visitors directly to a spaceport at Black Spire Outpost on Batuu, where the story that began in the starcruiser will continue and evolve while visitors explore the 14-acre land at Disneyâ€™s Hollywood Studios.

For more details and information in the future, head on over to the official website here. In the meantime, check out other concept art for what to expect from Star Wars: Galactic Starcruiser below.

Detective Pikachu Could Have Been A Much Better PokÃ©mon Movie; Here's Why

Tencent Is Investing Money In The Folks Behind Bayonetta