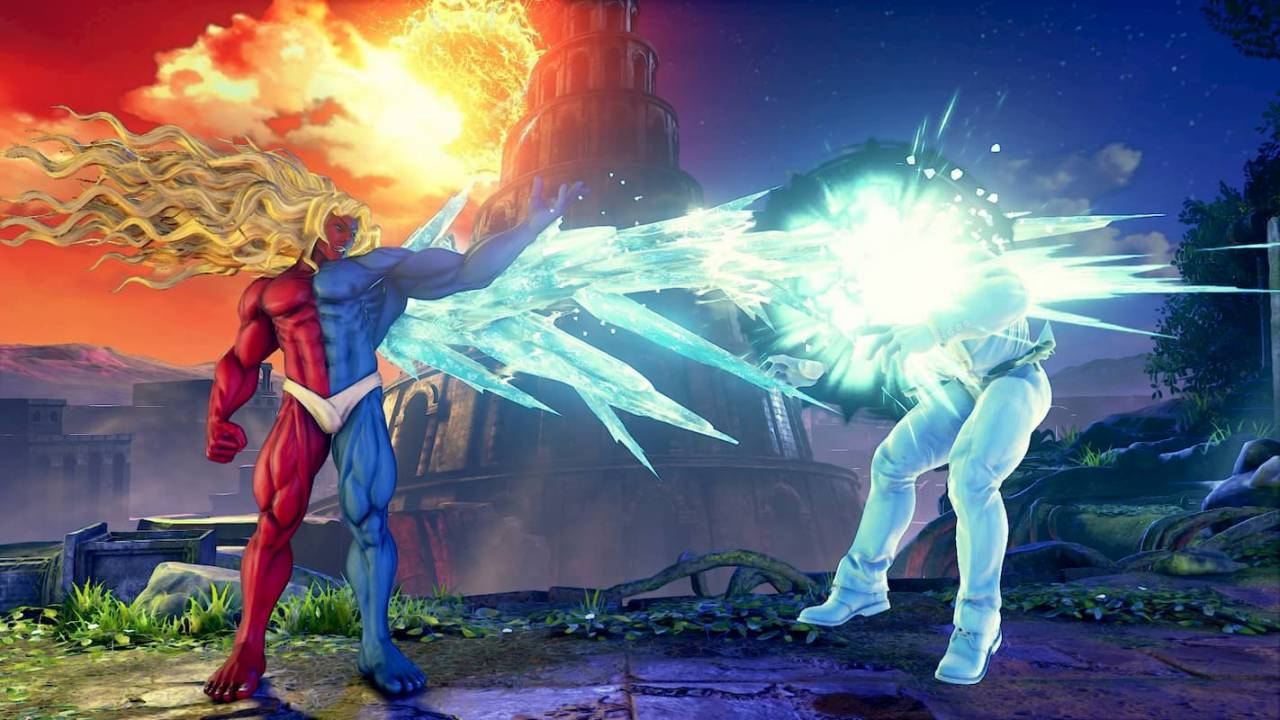 Street Fighter V’s next update will make its way onto PC and the PS4 next February. With it comes new characters, new updates, and even new V-Skill abilities for players to choose before a match-up.

Here is a list of V-Skill 2 abilities for most of the cast. We’ll be sure to update them as more get revealed in the next few weeks and months.

Ryu’s Thrust Strike actually functions very similarly to Kolin’s first V-Skill, the Inside Slash. Regardless of whether or not the opponent chooses to attack, Ryu thrusts his fist forward for an attack. Upon hitting the opponent, they’ll be blown back. This counts as a knockdown.

However, if Ryu happens to time his V-Skill 2 correctly, he’ll absorb an opponent’s incoming attack. This will also apparently cause Ryu to strike the opponent a second time, which will inflict more damage.

We clearly see that Ryu is able to V-Trigger cancel the second hit for even more damage. It’s even possible to combo into a Critical Art this way. As of right now, it’s currently unknown if the first hit can be V-Trigger cancelled.

With this new V-Skill, it looks as though Ryu will have a new way to generate V-Gauge. Since this V-Skill can be used offensively, Ryu can potentially end combos with it. Ryu’s first V-Skill only allowed him to generate V-Gauge through defensive means.

Ken’s new V-Skill II in #SFVCE is Ryusenkyaku, a wheel kick that can leave you at frame advantage on block when fully charged. pic.twitter.com/fS7NB4s09y

Ken’s second V-Skill is a great option for getting in on enemies. This move is -2 on block if uncharged and +3 if fully charged on block.

It’s also possible to combo this V-Skill into Ken’s 4-frame light kick, which can then be special cancelled. This makes the move great for combos, approaching, and pressure.

Ken cannot change the distance his V-Skill 2 travels. It’s the same each time unless it’s the charged version, which changes the trajectory. The V-Skill doesn’t travel through fireballs, but it can dodge around them if you time it correctly. Also, it’s not an overhead; it’s a mid-hitting strike.

Dhalsim’s V-Skill 2 powers up his YogaÂ Fire attacks. Once he performs his “Yoga Deep Breath”, his next Yoga Fire will be improved; it will have an additional hit added and will bounce off the ground once.

It’s also easy to perform a followup combo after hitting an empowered EX Yoga Fire up close, which means more up-close teleporting Dhalsim SFV shenanigans! Note that this V-Skill 2 can also be performed in the air; doing so will cause Dhalsim to stall his descent briefly.

He can also teleport after doing his V-Skill 2 in the air, which allows him to keep similar mobility to his V-Skill 1 usage. The best part? He still retains the buff if he gets hit; it only ends once you fire the powered-up Yoga fire.

As an added benefit, this buff will not disappear in the event that Dhalsim is struck before he is able to shoot off the next Yoga Fire. Keep in mind: his V-Skill 2 does not affect Yoga Flame and his other moves.

Watch Blanka, Alex and Kage perform their new V-Skills in #SFVCE! New abilities will be added to all characters this month. pic.twitter.com/gRDSemgcqy

Blanka’s new V-Skill II in #SFVCE is Shout of Earth. Blanka stores up his electrical energy before discharging it into the ground. pic.twitter.com/12FsbKpjSg

Blanka’s V-Skill 2 is a great option to choose against characters that rely heavily on projectile gameplay styles and to practically build V-Gauge during a match. This attack extends just outside of sweep range.

The regular version of Blanka’s V-Skill 2 is negative on block, but from the many ranges you’d typically use it from, it should be safe against most characters.

By charging Blanka’s V-Skill 2, it will be “plus a lot” on block. Don’t forget that you can store Blanka’s Shout of Earth by dashing to cancel the animation.

Her V-Skill 2 makes her perform a fast spinning kick as she yells out “Spinning Axel”. It’s similar in look to Cody’s V-Skill 1. This move may be cancelled from normals and thus used for juggles.

The fact that this move may help push enemies back means that she may be getting the “get off me” attack she needs for her pressure game.

Birdie’s second V-Skill Chewing Time has him chewing bubble gum and using it as an anti-air projectile of sorts.

By simply tapping the button, Birdie will chew some gum and only gain V-Gauge, similarly to eating a donut via his V-Skill 1. However, he is also capable of blowing a bubble which will alter the functionality of his normals. By pressing light punch, the bubble will explode on the opponent.

The medium and heavy punch versions will shoot the bubble as a projectile at varying arcs. By combining this with crouching, this actually gives Birdie four different trajectories in which the bubble can be fired.

Pressing kick will cause Birdie to expand the bubble. This bubble has up to three different sizes. While Birdie is blowing the bubble, it will block incoming projectiles. Do keep in mind that it won’t have an active hitbox until a punch button is pressed.

During the bubble-blowing process, Birdie is unable to perform forward or back dashes. In addition to this, he’s also unable to jump.

This movement option can be used to avoid attacks and cross-up attempts. Do keep in mind that this technique doesn’t appear to offer any invincibility. By holding down the medium punch and kick attacks, Sakura will automatically transition into a knee followup attack. Hitting the opponent will cause them to go into a juggle state.

After hitting someone with the knee followup, it’s possible to combo into Sakura’s Dragon Punch and other attacks for additional damage. As a nifty bonus, Sakura’s normals can be cancelled into her V-Skill 2. The followup action is -7 on block, so you’ll want to be careful with it.

Sakura’s V-Skill 2 functions similarly to Captain America’s Cartwheel in the Marvel vs. Capcom games. It can be used for defensive purposes to escape some situations, but with its recovery and lack of invulnerability, it won’t be able to be used frequently for those situations.

Cody’s new V-Skill II in #SFVCE is Crime Sway, a dodge that can be performed high or low, leading to a Wrench Fist or Lumbar Sweep. pic.twitter.com/2oJBm5aOWg

Cody can use his second V-Skill Crime Sway in standing and crouching states. Cody will be able to dodge specific attacks if timed correctly, much like a KOF dodge.

The standing version of the V-Skill appears capable of avoiding highs, overheads, and mids. The crouching version will evade low attacks, duh.

Cody is also armed with specific followup attacks after using his Crime Sway. Although the standing version Crime Sway followup can be special cancelled, the crouching version cannot. Cody’s V-Skill 2 gets buffed when he’s in either one of his V-Triggers.

Note: you can’t dodge throws and projectiles with this move. This sway is meant for normals and certain special attacks.

Alex’s new V-Skill II in #SFVCE is Overchain, which will cancel special moves into each other after he takes a second to limber up. pic.twitter.com/ZsXEXbYUm3

Alex’s second V-Skill allows him to cancel a special attack into another special on hit and block. That sounds well and good, and you can create some nasty setups if you plan ahead, but there are some drawbacks.

Like his V-Skill 1, Urien will take a moment to buff himself.

After performing his V-Skill 2, his next projectile will be enhanced and will remind you of one of his Supers in Street Fighter III: Third Strike/Double Impact. After firing the projectile, it will go from being a large projectile to a normal-sized one. Up-close, his big fireball will strike opponents up to three times.

Upon doing this, the opponent will be placed into a juggle state in which Urien will be able to follow up on. Even from afar, Urien’s empowered projectile will still have up to two hits connected to it.

Poison’s new V-Skill II in #SFVCE is Cartwheel, an acrobatic cartwheel that can switch sides with the opponent and cancel into a launching kick. pic.twitter.com/lhLvA0UA5L

Poison’s follow-up attack to her V-Skill 2 is a launcher, and you can juggle with her other attacks afterwards.

Juri’s new V-Skill II in #SFVCE is Fuha Enzan, a lingering projectile that she can store and unleash after a short charge animation. pic.twitter.com/eqX3uvCM6y

Staying in step with the character’s two-step special attacks, players will have to store her V-Skill 2 before sending it out onto the battlefield. Today’s footage shows us what the animation for storing the technique looks like.

Juri yells out “Oh yeah” as she takes a small lean forward to taunt her foe. This summons a gusty aura around her feet, signalling that Fuha Enzan is now locked, loaded, and ready for use.

Kage’s second V-Skill is an excellent method for building V-Gauge. Although it cannot be charged like Ken’s V-Skill 2, it’s only -2 on block. Luckily though, Kage is able to punish the opponent far enough away on block so that he doesn’t remain in throw range.

V-Trigger 1 will power up V-Skill 2 and add additional properties to the attack. For example, Kage can extend his target combo using V-Skill 2.

With V-Trigger 1, Kage’s V-Skill 2 will gain a followup action which is capable of performing an OTG (off the ground) if the opponent fails to quick rise.

Gill’s new V-Skill II in #SFVCE is Blocking, which will deflect any strike and leave the opponent vulnerable. pic.twitter.com/v5L8LHe3qL

As demonstrated a while ago, Gill’s second V-Skill is his parrying ability from SFIII. Parrying attacks will leave you at a frame advantage, so have fun trying to pull off your own EVO moment #37.

Beyond the Long Night Lets You Play As A Cowboy Ghost