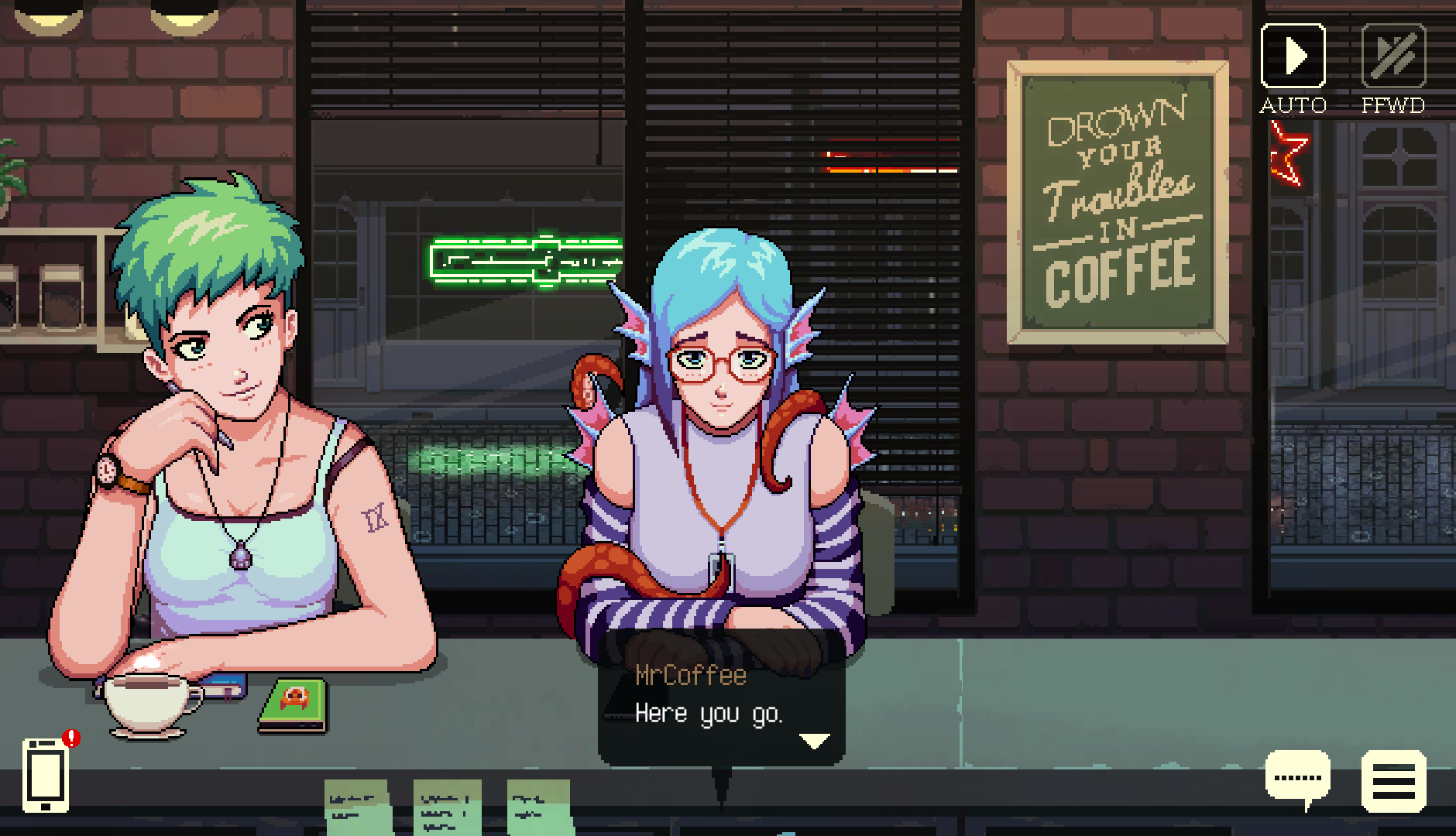 As much fun as I had with hyper action games & tense 1v1 fighting online, sometimes you need to tone it down with a little exquisite point-and-click-on-text-box experience or two. That’s where the visual novel genre comes in, along with its expected (and sometimes unwelcome) storytelling tropes, structures, and branching paths.

Gameplay and skill-testing conundrums are always welcome, but I rather balance out my gaming diet with some slice-of-life stories and characters and some appropriate original music to go with it. That said, iconic titles like the Ace Attorney, Danganronpa, and Nonary games blend in great narratives with logic puzzles that test you. If you’re good, you proceed and find out more about the story arc and its mysteries.

Coffee Talk from Indonesian game studio Toge Productions is not that kind of visual novel. And that’s OK.

You play as a barista of a self-owned store to a bunch of elves, orcs, and fantasy race tropes in an alternate version of Earth similar to that Netflix movie Bright, but less terrible and better laid out lore-wise.

All you do here is just listen to the many folks and people who visit your store from a journalist struggling to write her big break novel to an elf and succubus couple going through a rough patch in their 10-year relationship. You serve them the appropriate drinks for the situation and see how the story plays out.

Coffee Talk’s main game mode doesn’t cerebrally challenge you. Its only gameplay mechanic is figuring out someone’s order, serving it, and maybe draw some nice latte art. All your recipes for your drinks are laid out on your phone via the Brewpad app; just refer to it, tap buttons and objects on the right side of the screen when prompted, and you’re good to serve.

Sometimes you need to experiment and figure out drinks on your own that aren’t on the Brewpad, but all it takes is just some know-how and process of elimination-type thought processing to sort it out.

Using the fantasy hybrid theme, you’ll get different anecdotes concerning racism, classism, immigration, and family ties. All of them are written pretty adequately and offer just a nice slice of payoff and resolution in this title’s relaxing context. Assuming you picked the right choice and brew, of course.

Kudos to the tiny Toge team for not only doing this but also beefing it up with lovely 2D visuals and a nice lo-fi soundtrack that’s sure to go on the 2020 version of this eclectic video.

Coffee Talk doesn’t punish you much save for story bits you might miss out on; you can always reload from a previous save, though you’re only allocated one slot per playthrough. This basically removes all semblance of a challenge, but I do believe that is Toge Production’s intent; to foster a relaxed gaming and story-driven experience.

And it’s doing a decent job at that. From the aforementioned soundtrack to the warm colours, all the way to the optional latte art minigame, the game begs that you take your time with it. I do wish there were more story arcs that went to different pathways instead of the usual “good or bad ending” story scenario that entails most visual novel titles with humble-sized teams backing it up.

It isn’t going to supersede other chillax visual novels like VA-11 Hall-A in scope, Coffee Talk at least offers an arguably better user interface, more eye candy, and a few relevant topics you can relate to in this corner of the world.

Even with all the werewolves, vampires, and cat people walking outside your store, Coffee Talk’s stories are as real as you can get.

If you want more than a campaign though, the game does offer an Endless and Challenge mode. Endless lets you experiment drinks and concoctions with willing subject Freya, while the latter makes you fulfil as many correct orders as possible for a high score.

These are pleasant distractions at best, though Toge should do well to refine the latter mode as free DLC to get a competitive digital coffee-serving scene going. Just throwing it out there, as someone well-versed in the competitive gaming scene.

Coffee Talk doesn’t fight and test you. But it will calm and soothe your core with its honesty & seemingly-mundane-yet-impactful short tales. In the start of 2020, it couldn’t have come at a better time, especially given a lot of crap going on right now this month involving airborne viruses in China and impending worldwide talk about invasions.

All in all, this is one comfortable drink worth ordering. Just don’t expect it to blow your mind if you’re looking for a transcendent experience.

by Creator Of Coffee Talk, What Comes After, & Afterlove EP Has Passed Away | KAKUCHOPUREI.COM in March 28, 2022
Reply

[…] Indonesian game developer Mohammad Fahmi. He was known for creating hit Indonesian adventure game Coffee Talk, What Comes After, and the upcoming Afterlove […]

by Proceeds From What Comes After To Be Donated To The Late Fahmi’s Family in April 7, 2022
Reply

[…] Fahmi, who passed away last month. He was best known creating hit Indonesian adventure game Coffee Talk, What Comes After, and the upcoming Afterlove […]