Memories of Mars Is Fine, But Doesn’t Inspire Me To Return To Its Planet

I’ve played and enjoyed shooters with survival elements, like Metro: Last Light and Stalker: Call of Pripyat. But if it’s a full-on survival game with resource-gathering, crafting, constantly-draining meters, and (shudders) other people, I tend to stay clear. It’s why I’m not writing this as a scored review.Â

Despite my aversion to survival games, the nine hours I’ve spent with Limbic Entertainment’s Memories of Mars haven’t been horrid. I’ve actually had a rather pleasant time with the game. Pleasant isn’t enough in this case though, which I’ll explain later.

In Memories of Mars, you’re a clone – male or female, depending on your choice – who’s woken up to find that things have, naturally, gone wrong. After an in-doors-set tutorial with a slight horror vibe, you spawn on the surface of the red planet.

On the surface, the humans are dead and there are antagonistic, insectoid robots walking around in their outposts. Your goal is to find out what the heck happened and escape the planet by following the game’s instructions.

The premise is fine, but I’m not really interested in the story itself, which talks about stuff like corporations and cloning through logs that you compile. It doesn’t help that the last log I found is written in Mandarin, which I can’t read. 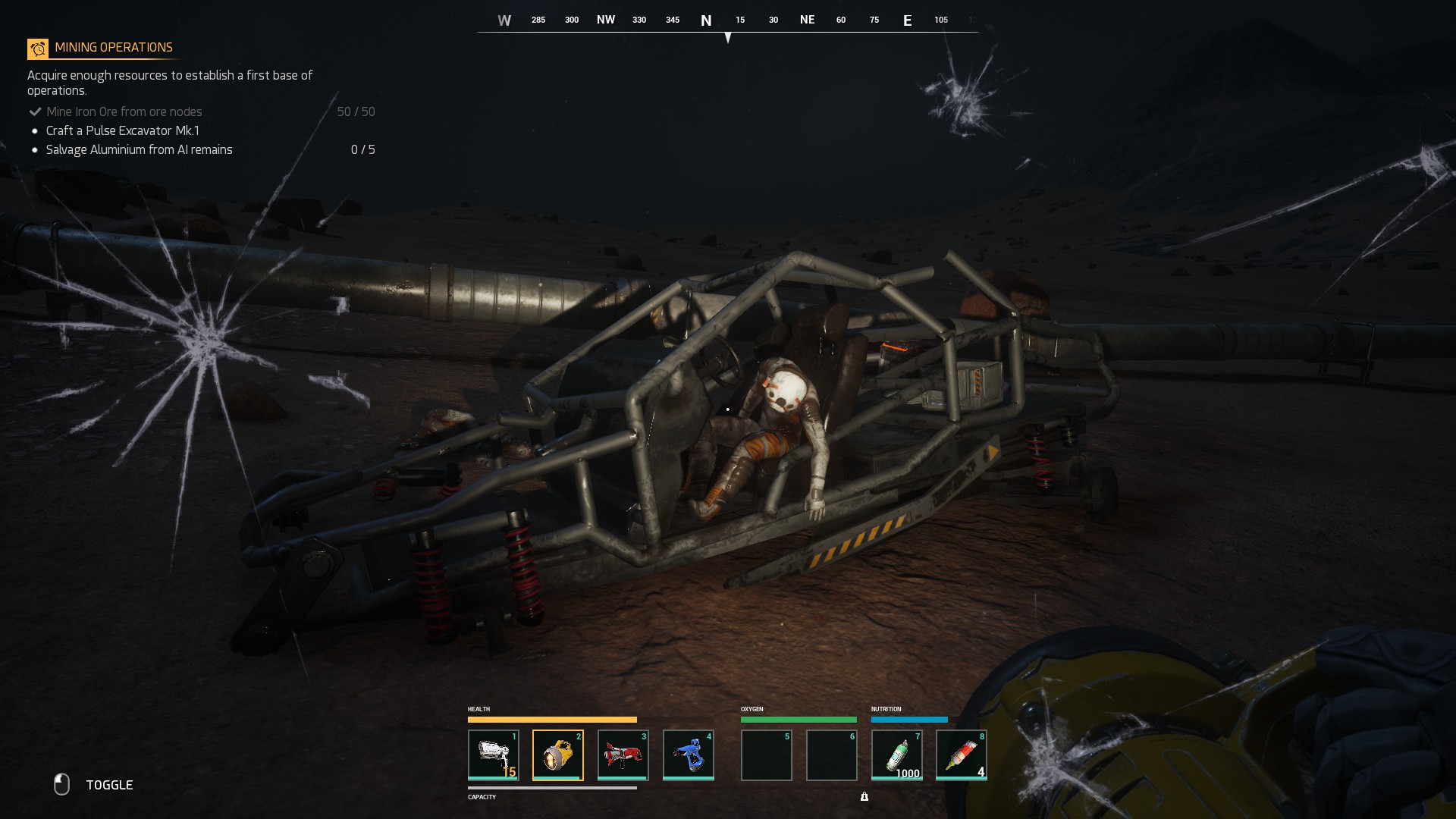 The game has its share of environmental storytelling. You’ll see dead bodies, crashed rovers, other wreckages, and still-active screens that display news headlines. When it comes to the main revelations, however, Memories of Mars relies on plain text logs, which just aren’t as stimulating.

I like that the story is there to give me direction, at least. While it was fun wandering the map randomly in my first session, I decided that it’d be easier and more interesting in the long run to progress through the game’s skill trees while following the game’s objectives.

The overall objective is to get off Mars, but there are many smaller goals, like “explore this outpost” or “build a base”, that guide you to the eventual end game. These also take you through the building and crafting elements of the game bit by bit. You could discover things at your own pace, but I’ve found that I had to recraft certain items occasionally upon returning to the story, because the game doesn’t always recognize that you’ve already accomplished something before it instructed you to.

Crafting and gathering are simple. You can pick up stuff by pressing F, but most resources are mined with an excavator tool, which you can later replace with the superior blowtorch (which I don’t have the resources for yet). Resources range include aluminium and copper, and there are also plants you can harvest, though they haven’t come into play for me yet.

The main resource is iron ore, which you’ll obtain primarily from stones you pick up and larger rocks you need to mine. Mining these rocks with the excavator is surprisingly compelling.

The way the rocks grow with a faint blue tinge, and the way your excavator leaves audible, crisp-looking cracks on them, make it tempting to mine every minable rock I see.Â 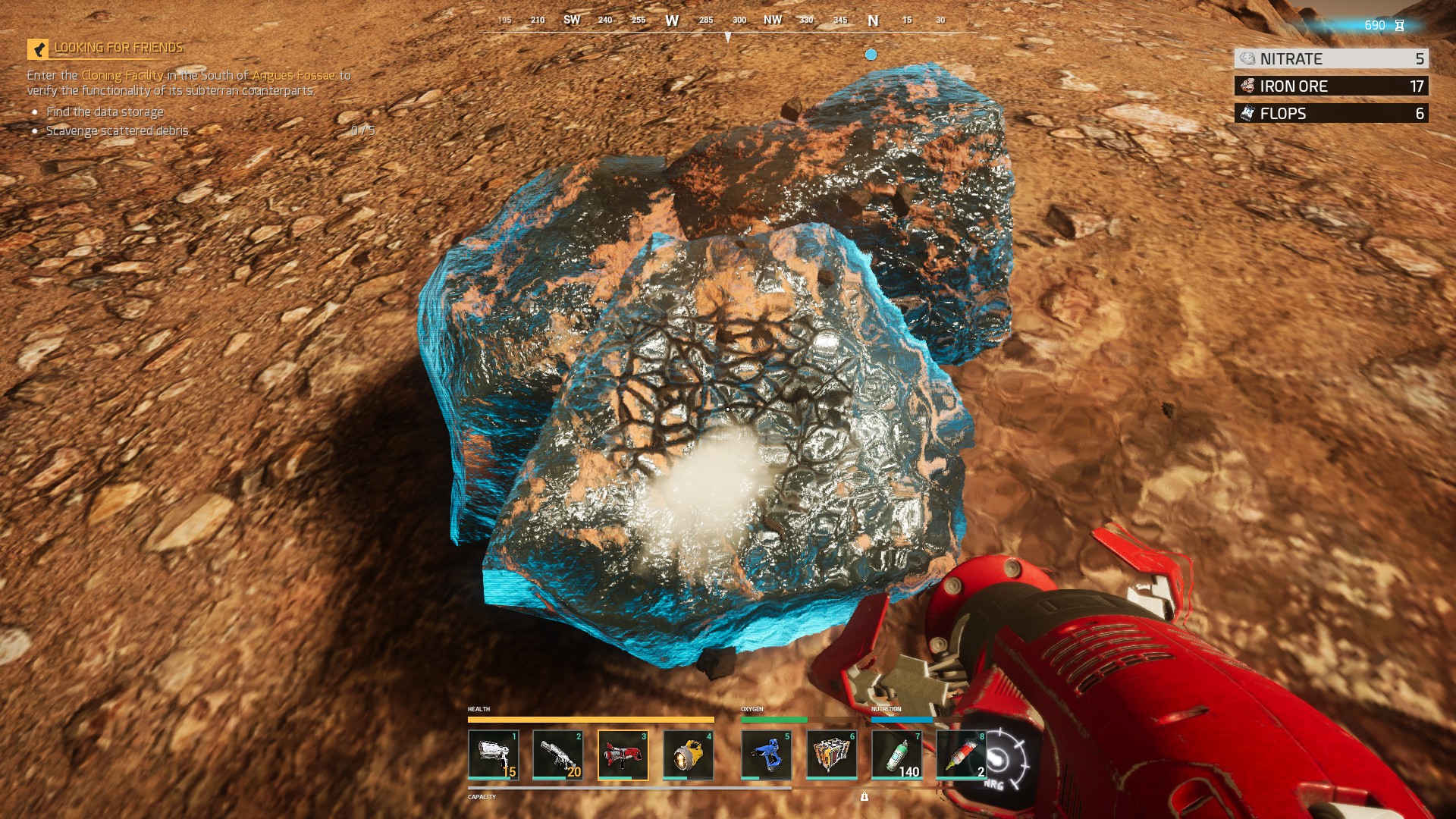 Using your portable 3D printer, which lets you craft basic stuff, you can turn those iron ores into iron bars. These are your main resource for construction, which you carry out by selecting the object you want, placing the hologram, and building it with a welder.

Basic things like walls and platforms only need iron bars, but you’ll soon find yourself needing aluminium and more for the more advanced add-ons and base components, like a 3D printer for more advanced crafting and an Administration Terminal.

Administration Terminals are meant to protect your bases from being dismantled by other players. The more currency (called Flops) you dump into it, the longer it remains immune. Interacting with a base, like by engaging with the terminal, resets the timer, so taking a long break from the game might endanger what you’ve built.

The terminals don’t make your bases completely invulnerable though. One of the trailers on the Steam page shows how you can use explosives to mess with other players’ hard work. However, things are rather peaceful on the server I joined.

Part of that is because PvP seems to have taken a backseat to PvE in Memory of Mars‘ finalized release, based on some discussion threads I’ve seen. I’m not even sure if you can still blow up other players’ buildings. According to the developer, the official servers are PvE with occasional PvP events and one permanent PvP zone geared towards high-level players. Private servers allow you to go full PvE, rather than the other way round. 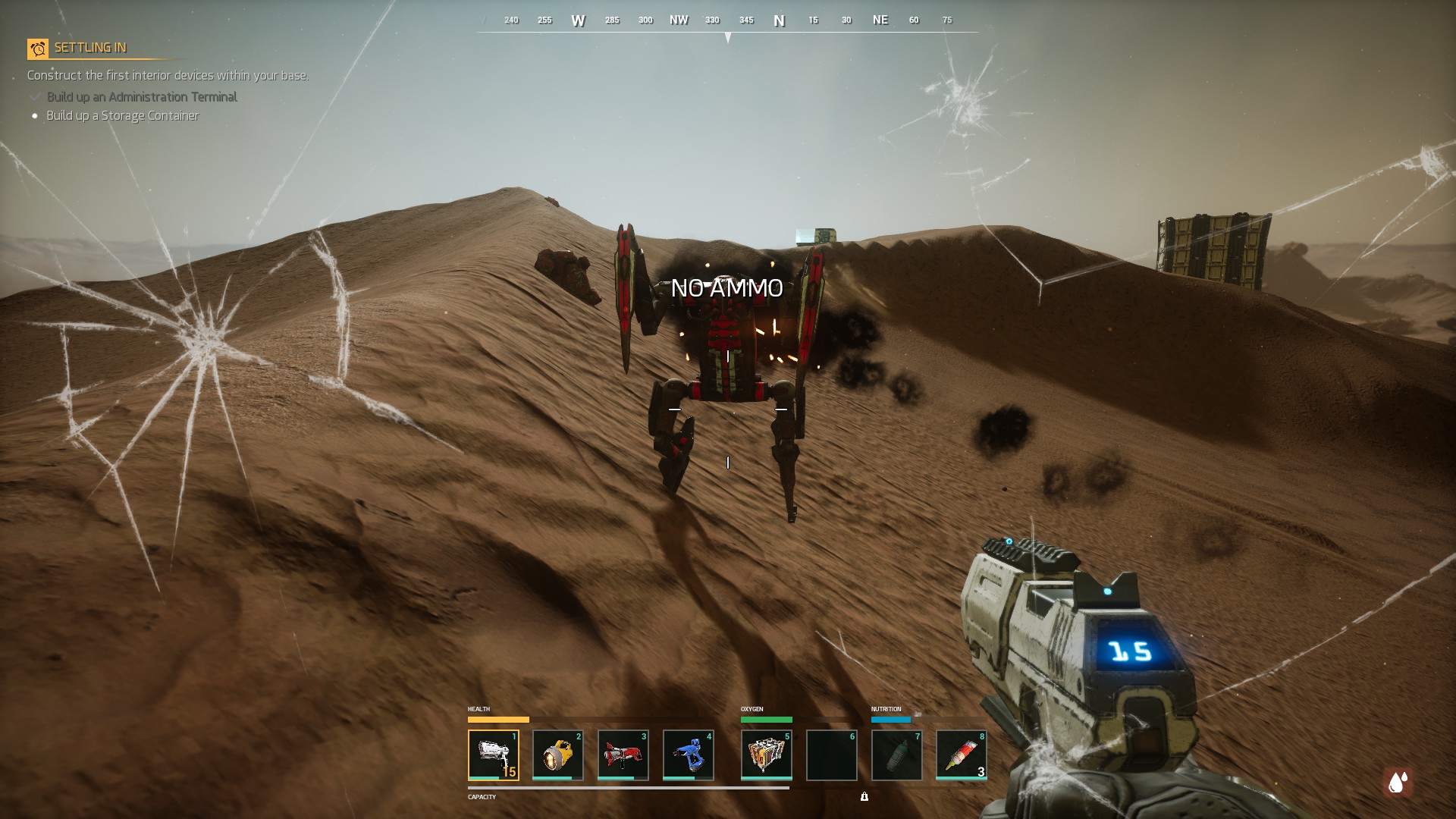 I like not having to worry about player attacks all the time, but I do wish the PvE side had a bit more tension. Initially, robots pose a real threat. At one point, I died to one and had to trek from my initial spawn area all the way to the point of my demise to reclaim my inventory.Â

You can later build cloning chambers that, when activated (you can only have one active at a time), serve as spawn points. My complaint about the lack of tension doesn’t stem from that though, but from how enemies’ damage output seems to drop off drastically once you’ve put on a chest plate.

In contrast, mine shot up after crafting a low-level assault rifle, although I haven’t tested them against the robotic worms that inhabit parts of the map.Â

Helping with your survivability is the robots’ seeming inability to pick up sound. While I’ve had to fend off multiple robots at the same time, your gunfire alone won’t draw the attention of every bot in the vicinity.

That doesn’t mean that the slightly stiff combat become entirely effortless, especially against the smaller, agile robots that scurry onto walls and ceilings. But where I once fled from certain robots, especially the ones that come up to you, arms that end with razor-sharp blades outstretched as if they want to hug you to death, I feel less compelled to flee during a fight now. That might change once I meet higher-level enemies, but my combat encounters have been safe affairs for the last few hours.Â

Instead, I find myself more concerned about my oxygen and nutrition levels. I haven’t actually died because my bars dropped to zero yet, but I frequently mark the oxygen stations that are scattered across the map and make sure to craft dry rations for nutrition. I was quite sure that I’d die from hunger eventually, but I’ve somehow always had enough dry rations to keep me going while never experiencing an oversupply of them. 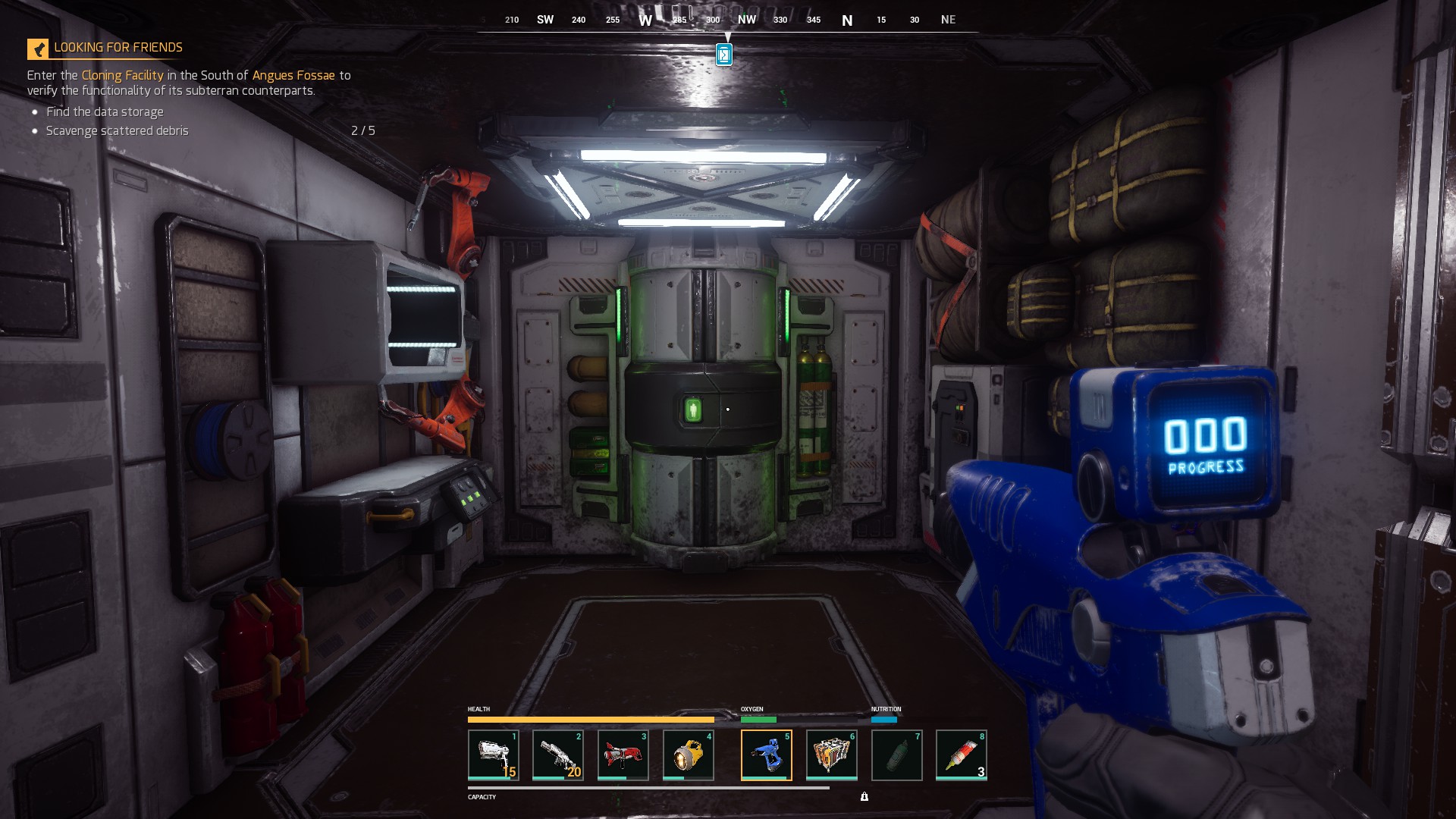 You can level up your character using skill points so that they consume oxygen and nutrition at a slower pace. But like all of the game’s percentage-based upgrades, which are bought with Flops, these come in 5% increments, which isn’t very compelling.

I don’t feel tempted to rush for the higher-level or even mid-tier item unlocks either, since I’m unlikely to have the resources needed to craft them. It’s for that reason that I chose to follow the story than chart my own path, as it’s easier to be introduced to new resources this way than to rely on guesswork.Â

I’m not sure how many players have done the opposite and decided to ignore the story in favour of doing their own thing, but I’ve definitely seen player constructs with more ambition and creativity than mine. While my bases are small, basic, and merely functional, I’ve come across imposing fortresses and impressive ramps that connect to otherwise inaccessible cliffs.

In my last session, I logged into the game to find that a bunch of buildings, including a base-like structure, had suddenly popped up all over a previously empty stretch of land, like a small town had been built overnight. Memories of Mars is no Minecraft, but seeing other players’ creations is still a joy, and building my own is – even with my lack of ambition – satisfying. If you want to build together with other players, you can join an Alliance.Â

Surprisingly, Mars itself isn’t a boring place either. Even when I first spawned in a desert, I felt inspired to dash across the plains instead of griping about sand like Anakin. There are outposts and other structures dotted around that both add visual variety and serve the story, and there are of course the player structures. 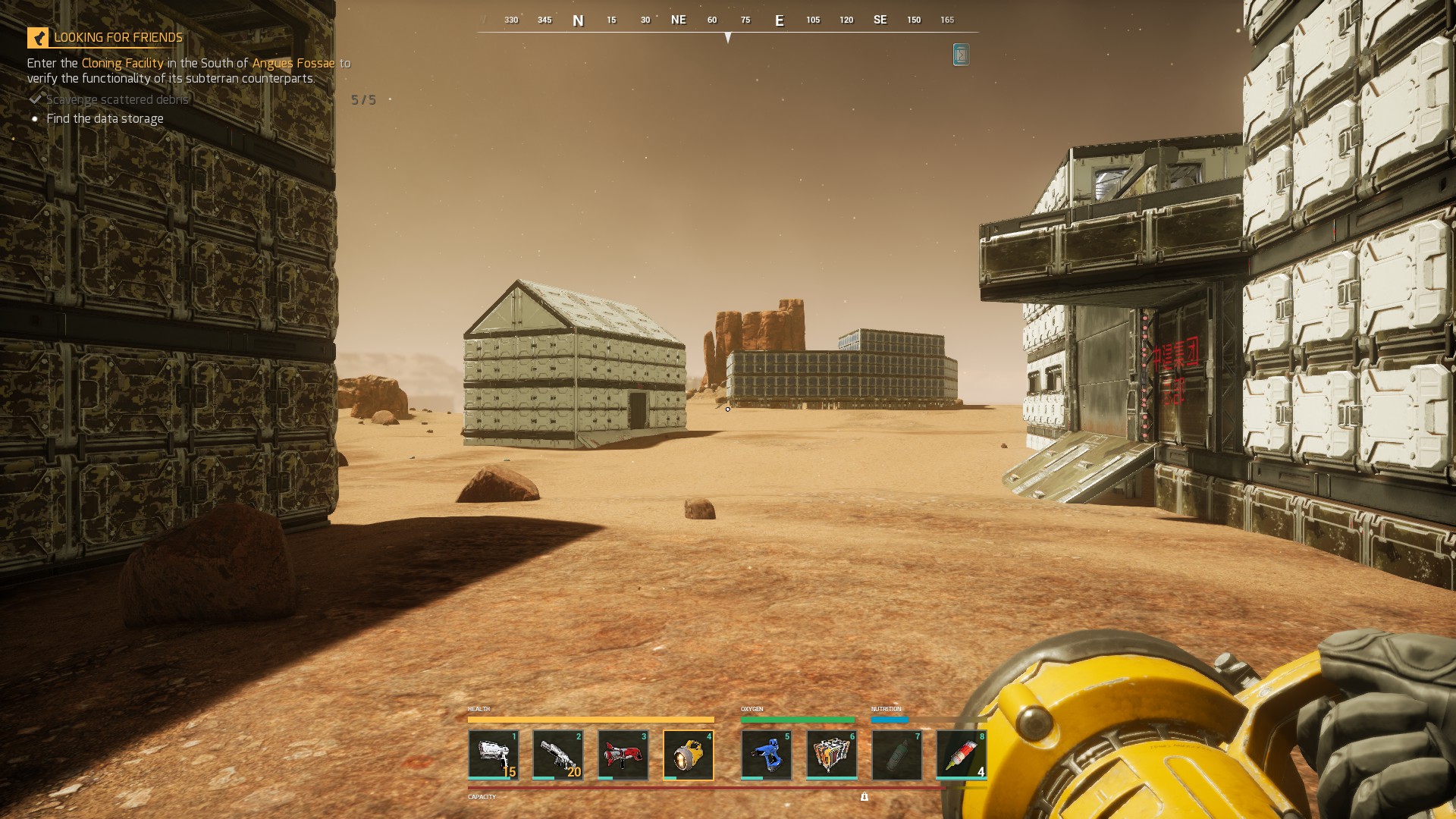 The day-night cycle helps too. At dusk, Mars truly becomes a red planet. Night is mostly defined by darkness, but they make the mysterious lights in the sky more attractive and mysterious, and there was also the time when the horizon before me was suddenly illuminated by a meteor strike.Â

The only thing that sours exploration slightly is the occasional tendency to get stuck, but the game has a dedicated unstuck button for such occasions. If that still fails, leaving and logging back in has done the trick for me so far.Â

My main problem with Memories of Mars is that while I enjoy my stay on the red planet, I don’t really feel the urge to log back in after I leave. It’s a game that’s mainly okay, and it doesn’t have much of a special charm.

If I didn’t have to write about it, I’d easily boot up Halo: Combat Evolved Anniversary or a visual novel and never look back at Memories of Mars.

The player base is small too; on 32 player servers, I’ve yet to see more than 15 online at a time. Many servers are empty or near-empty.

It hasn’t affected my experience since the game works fine as a solitary adventure, but that begs the question of why it’s multiplayer-only (unless you create a private server) in the first place. The only answer I can think of is that without player structures popping up around the place, the sights on Mars would wear thin quickly.Â 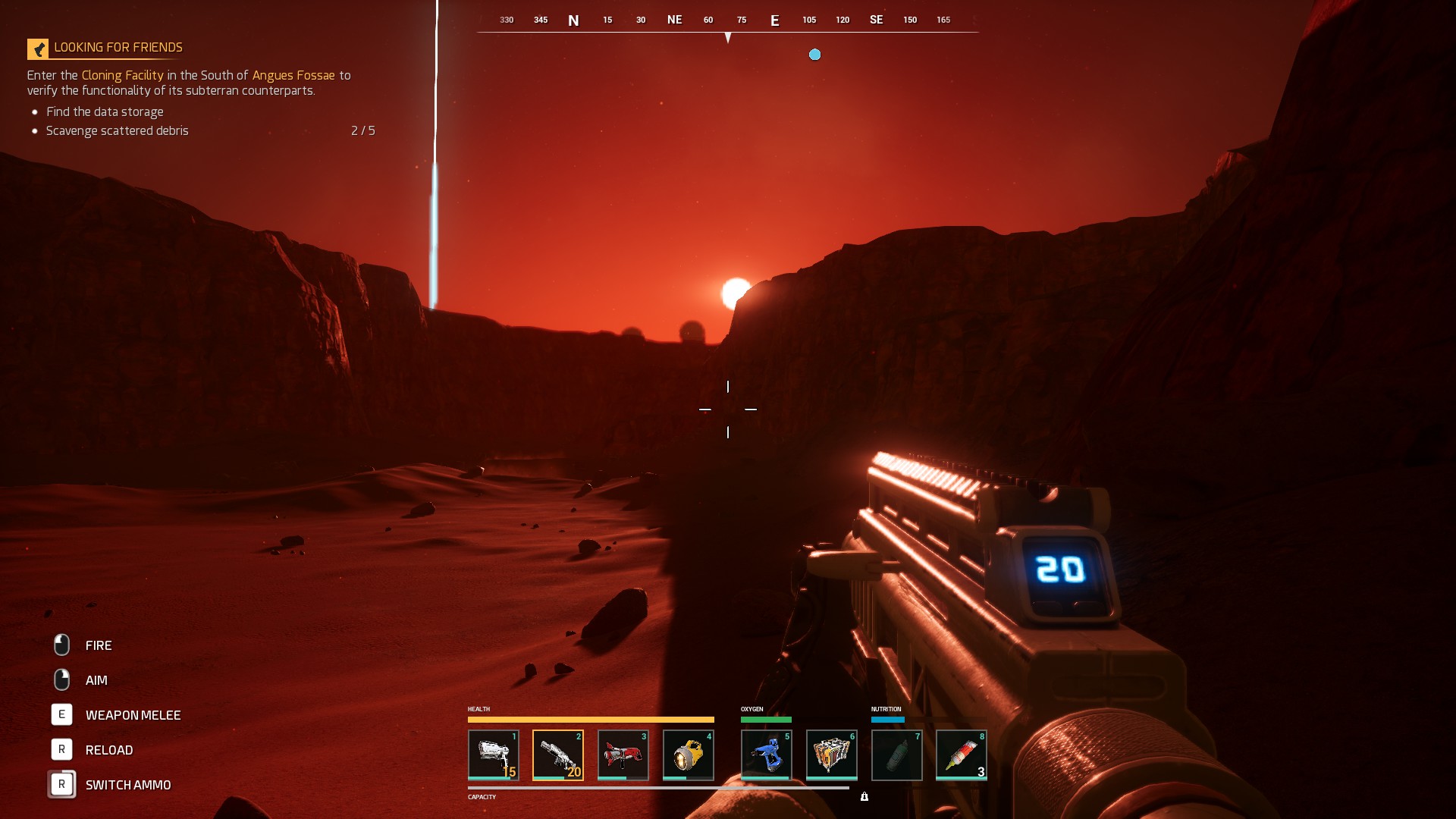 Again, I enjoyed my time with Memories of Mars, and it’s not a bad game. It’s just that once I get back to my usual gaming diet, my Memories of Mars will likely become just a passing dream.

Feature
The Last King Podcast Talks About The Fallout Series

We do love the Fallout series, but we're not sure if Bethesda does. As much fun as Fallout 3 and 4 can get, they don't seem to capture the magic of th...

Feature
The Best Spring 2019 Anime You Should Watch

Spring 2019 has just begun and with it a ton of new anime to watch. Sure, ongoing shows are always around, but there's no harm in taking a break from ...

365 days ago, Apex Legends dropped on our laps without any fanfare nor teasers. No marketing spiel. No promises. No warning. In 2019,Â  this was un...