7 Tips To Get You Through XCOM: Chimera Squad 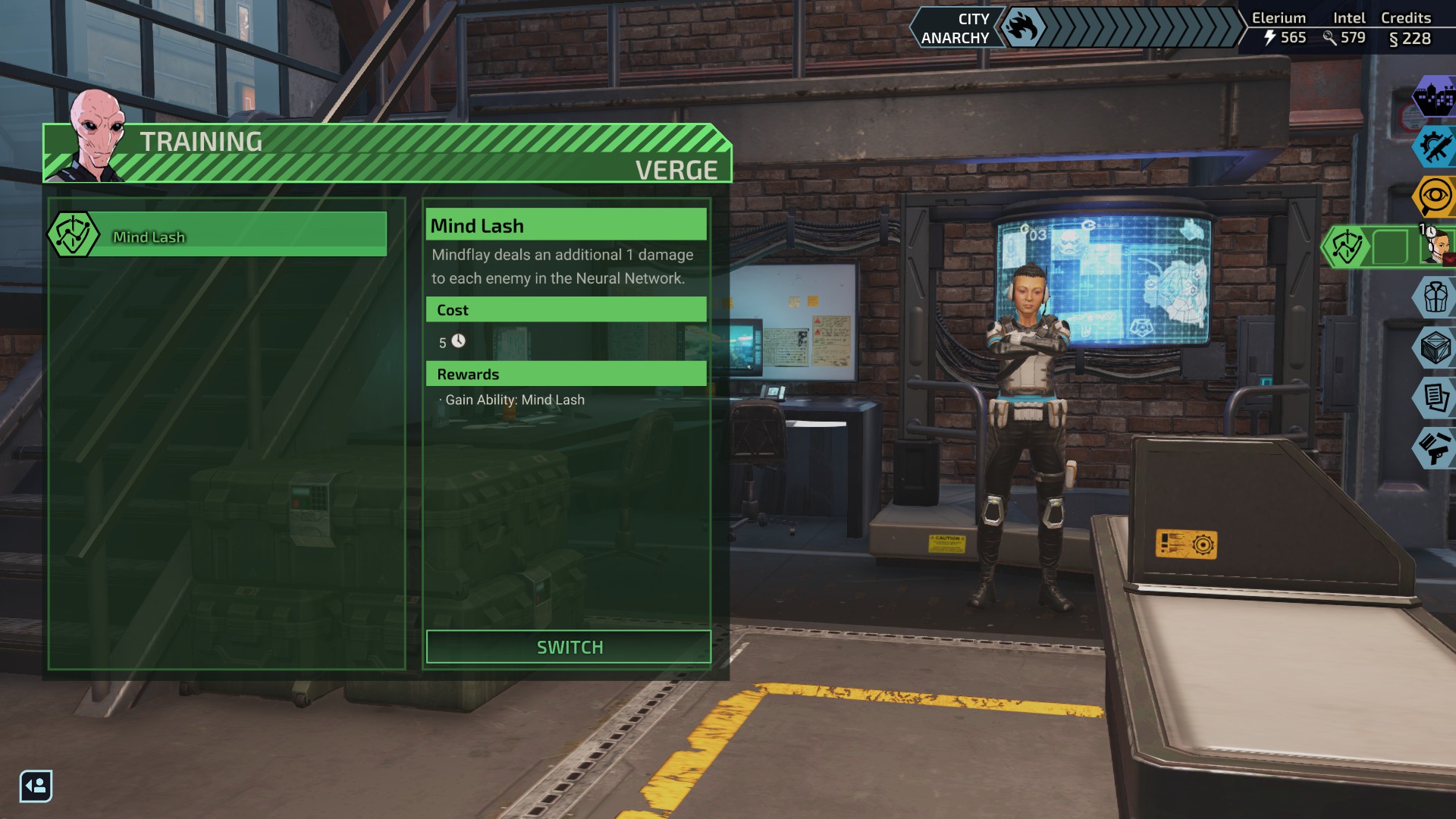 You can unlock eight of Chimera Squadâ€™s 11 agents in the campaign, but only field four at a time. The game offers several ways to let the leftover idle agents do something useful in the meantime, and one of them is Training.

Training serves two purposes. One is to remove stat-reducing scars that are earned from injuries. The other is to improve your Agents, whether by increasing stats or even giving them entirely new abilities.

We never paid much to these improvements at first, but once we unlocked an additional Training slot, there was no excuse for us to use Training exclusively for removing scars. The stat increases include things like +20 Dodge or +2 Health, while abilities range from one that increases Vergeâ€™s Mindflay ability damage by 1, to another that lets Blueblood reload without using up an action.

At first, we thought that things like +2 Health or a free reload werenâ€™t anything to get excited about. But as later Encounters got tougher, we started to appreciate these little buffs. It gives idle Agents something to do anyway, so why not? 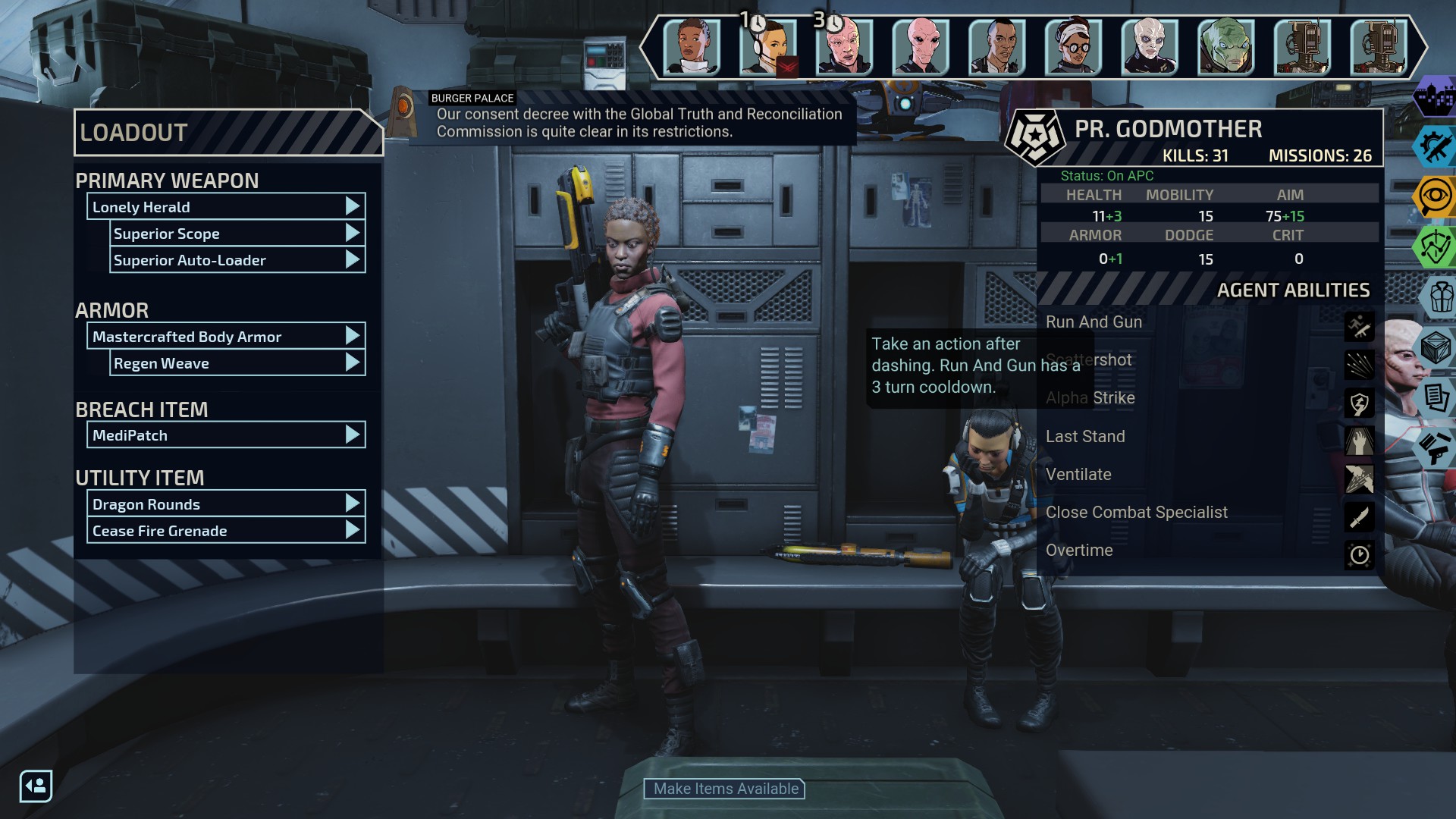 Epic weapons wonâ€™t make the rest of your armoury look useless in terms of damage, but these named weapons do have something you wonâ€™t find on a regular gun: abilities.

Now, aÂ number of these abilities suffer from being one use per mission only, making them rather situational. The Fortunate Blossom Assault Rifleâ€™s Serial ability refunds an action whenever it kills an enemy, but itâ€™s a bit of a hassle to set things up so that its one use can be fully maximised. But while this means that you should temper some of your expectations, itâ€™s still good to have some Epic weapons by the end of the game (I think I had nine in the end), since having an extra situational ability is still better than having none.

Then there are the Epic weapons whose abilities have regular cooldowns. I generally liked these more, since I donâ€™t have to be miserly with them and the abilities are pretty good too. The Crucial Symmetry submachine gunâ€™s Chain Shot ability, for example, lets you shoot a second time at the same target automatically if you hit it the first time, although these shots have a 15 Accuracy penalty. I actually handed it to an Android, and it kicked ass because of it a few times.

Meanwhile, the Lonely Herald shotgunâ€™s Run and Gun lets you take an action after dashing, which is great for getting within range of a far-off enemy and still being able to shoot with it. On the other hand, the Artful Fathom pistol gives the user a free shooting attack â€“ a great fit for pistol expert Blueblood, as when combined with his Deadeye ability, he basically gets to shoot thrice per turn.

So yeah, grab those Epic weapons.

When in doubt, bring Terminal 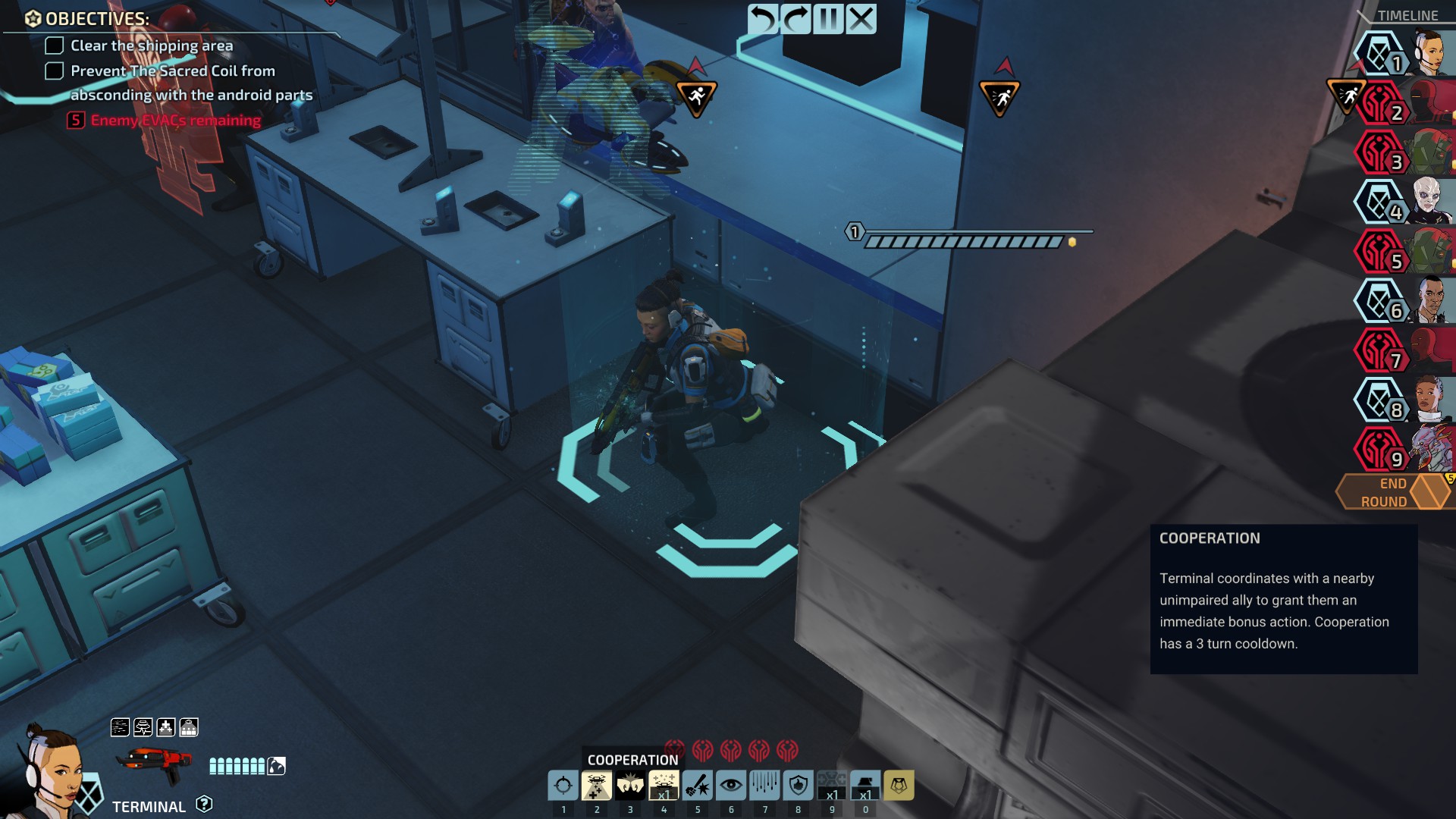 Terminal is the closest to a must-take Agent in the game, out of the eight we had at least. Sheâ€™s one of the starting Agents, and sheâ€™s a great asset from the get-go thanks to her Safeguard ability, which lets her send GREMLIN to over to an injured ally (or herself) to provide some heaing. She can even use the GREMLIN to stabilize someone whoâ€™s bleeding out, so you donâ€™t have to move another Agent out of position and potentially expose them to do so.

She only gets better from here. The Cooperation skill allows her to give an ally an immediate out-of-turn action, which is nifty for activating something you need now instead of multiple enemiesâ€™ turns later. Itâ€™s even better when paired with abilities without cooldowns like Vergeâ€™s Stupor, as you can stun two enemies per round instead of only one.

Then thereâ€™s her once-per-mission ability, which is a buffed-up version of Safeguard that heals everyone in the squad, stabilizes those that are bleeding out, and removes effects like Acid and Poison. She can unlock abilities that increase her self-preservation (which was what we did), or increase her support capabilities with Pin Down (which pushes an enemyâ€™s Timeline placement down so that they activate later) and Armor System (Safeguard gives +1 armour to the target too).

Basically, Terminal is awesome and very useful. While weâ€™ve left her out a few times for a change of pace, sheâ€™ll always be there during a Takedown mission.

From lead protagonist to vigilante and convict, Cody Travers is one of the last to consider a political role, let alone the Mayor's Office for Metro C...

Feature
Ranking The Kingdom Hearts Games From Best To Worst

I can't believe that we're here. Kingdom Hearts 3 is literally only two weeks away. I've spent the last month or so replaying all the Kingdom Hearts t...