7 Tips To Get You Through XCOM: Chimera Squad

XCOM: Chimera Squad is coming out soon, and it’s a bit of a different beast than previous XCOM games. It’s a spin-off set after the Overlords’ defeat, with former alien soldiers who were left on Earth now co-existing with the humans. Instead of fighting off an alien invasion, you’re now managing the peace in City 31 with Chimera Squad, an XCOM team that has both humans and alien hybrids in its ranks.

These Agents do not fall under previous XCOM games’ classes either. Instead, each of them is a unique named character with their own abilities and skill trees. There are other new features to know about, but you can learn about them in our review.

Part of the fun comes from experimenting with different squad compositions and figuring things out yourself. If you’d prefer to gain some intel or get some recommendations before heading off into City 31, however, we’ve got you covered with these seven tips. 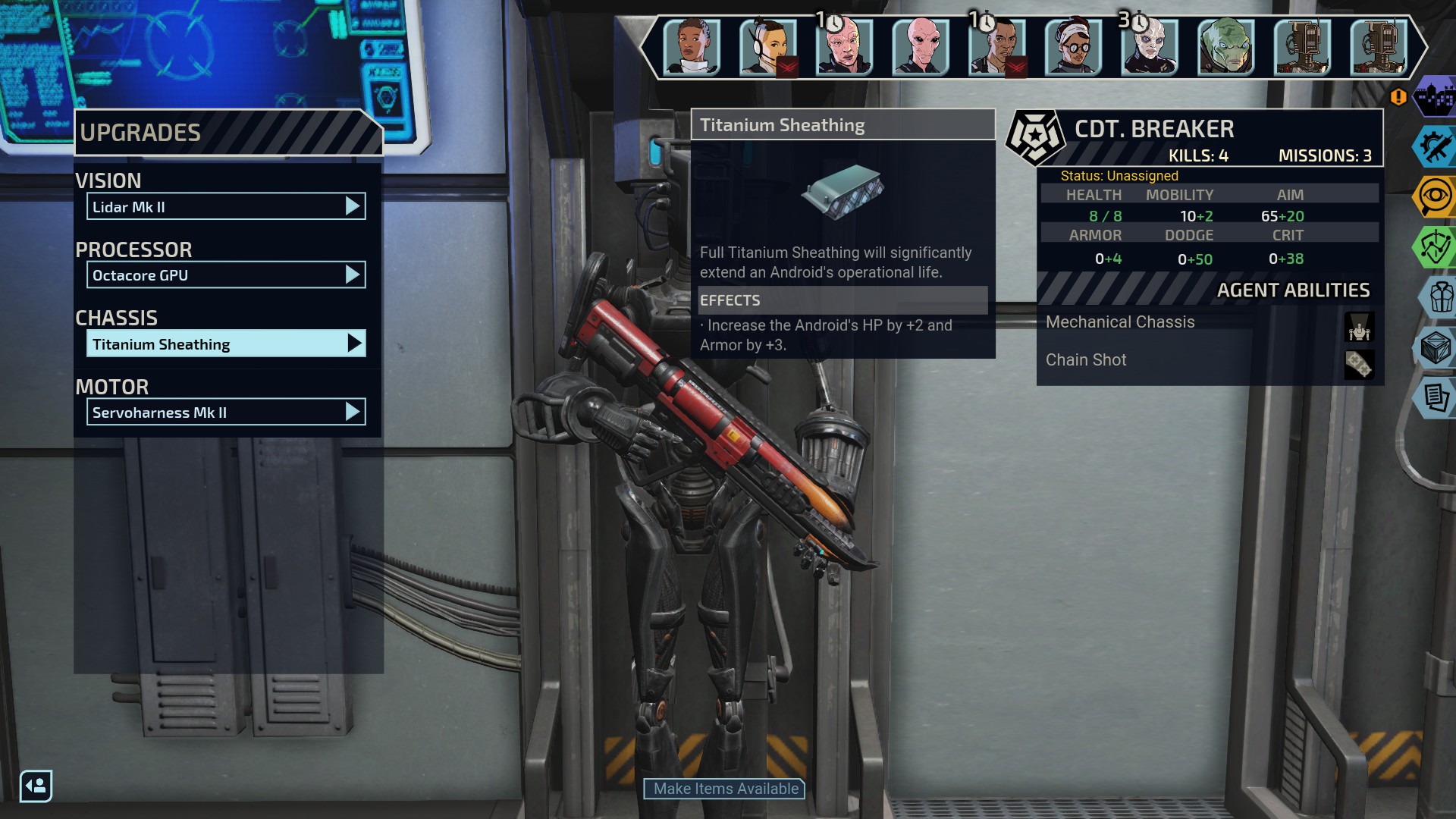 Losing an Agent in Chimera Squad means itâ€™s game over, so youâ€™ll have to stabilize them before they bleed out. However, while doing so saves their lives, theyâ€™ll still be unconscious and unable to take part in the mission any more. This can be particularly troublesome if youâ€™ve got remaining Situations to tackle.

Luckily, you can use Androids to replace fallen Agents in between Situations. The first time we fielded an Android was actually pretty bad, but that was because we didnâ€™t bother to upgrade it and was playing a faction Takedown mission, which are generally tougher than the regular ones.

After that Encounter, we decided to focus on Android-related research for a while, and the changes were evident. The next two times I fielded Androids were also during Takedown missions, but this time, my Androids were tougher and actually contributed to the fight.

Of course, you can always just save scum so that you can carry on with all of your Agents. Otherwise, donâ€™t forget to give your Androids some attention and love. 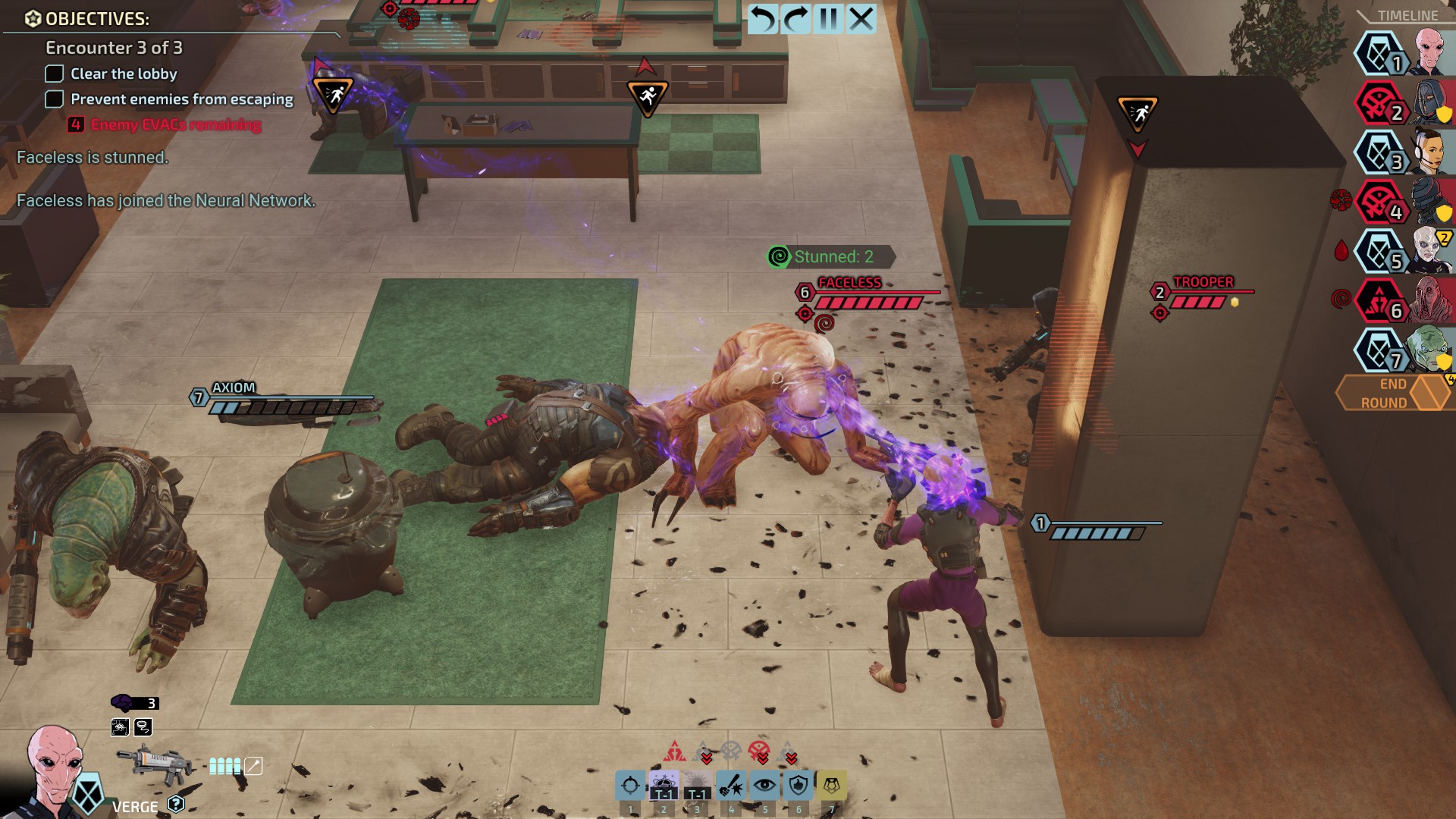 This will depend on your playstyle and preference, and I certainly had missions where I went in with four mainly damage-focused Agents and did alright. Having said that, I also remember the tough missions where having some Agents with crowd control skills really helped. Youâ€™re always outnumbered, and as the game goes on, tougher enemies appear in increasingly high numbers, so simply relying on damage might not be the best option.

Since you can only get eight out of the 11 Agents in the campaign, there was at least one crowd control Agent I missed out on, but I still had a pretty strong selection to choose from. Patchwork mainly does damage with her GREMLIN drone at first, but you can choose to give its lightning the ability to inflict a negative status effect on enemies, while Patchwork herself can trap enemies â€“ or allies â€“ in a stasis field. Verge, whom you get from the start, can stun enemies with his psionic abilities, and can later unlock a once-per-mission Mind Control power.

In addition, there are utility items like Stun Grenades and Ceasefire grenades that anyone can take, and even combat-focused Agents like Zephyr or Axiom have the ability to stun or disorient enemies with their melee attacks.

I still remember a tough Takedown Encounter where I was down to just Patchwork and Verge. The enemy ranks had been thinned out significantly too, but the remaining Andromedons and Chrysallids were enough to make me wonder if I should just reload a save. Thanks to my Agentsâ€™ crowd control abilities, however, plus Patchworkâ€™s drone automatically zapping and potentially stunning enemies that got too close, I was able to manage overcome the enemyâ€™s numerical advantage and focus them down.

Make use of Field Teams and Spec Ops 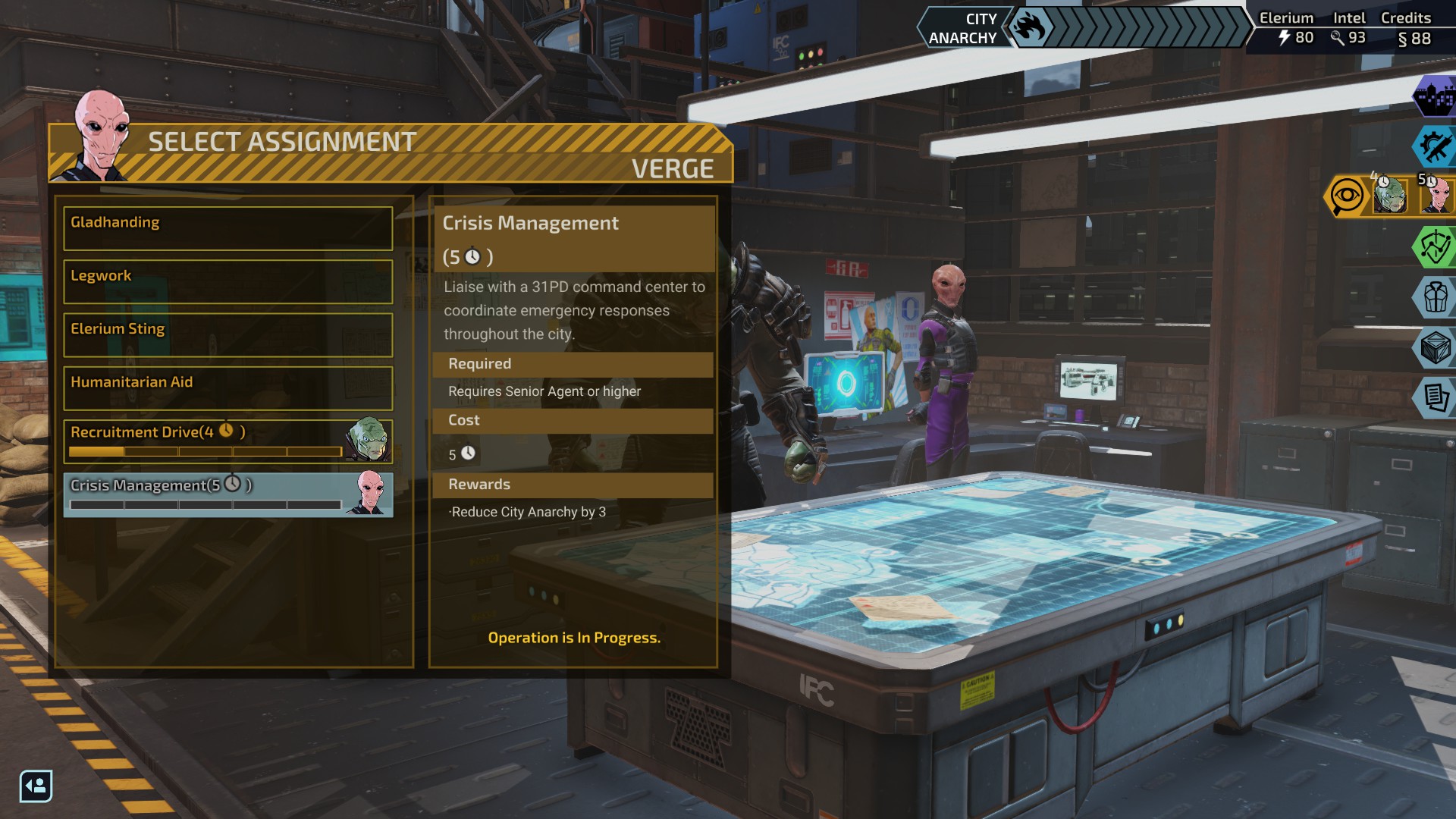 The strategic portion of Chimera Squad is about controlling City 31â€™s Anarchy meter, which means controlling the respective Unrest meters of its nine districts. The primary way of doing this is by completing missions, but when youâ€™re often choosing between different missions, some with more appetizing rewards than others, youâ€™ll definitely have to make some sacrifices.

Fortunately, Chimera Squad gives you the tools to make up for those sacrifices. With Field Teams, you can passively earn resources and also unlock abilities that let you manage the Unrest and Anarchy levels. These abilities let you reduce a districtâ€™s Unrest level, prevent a districtâ€™s Unrest level from increasing, tackle two Situation-type missions and reap their rewards at once, and reduce the City Anarchy meter. In addition, you can send spare Agents on Spec Ops missions to either get some resources, or to manage Unrest and Anarchy levels.

Field Teams and Spec Ops thus serve two important roles: providing you with resources you missed out on when picking one mission over the other, and helping to manage Unrest and Anarchy levels. On Normal difficulty, fairly aggressive use of these assets means that your City Anarchy meter will rarely be in danger of maxing out. 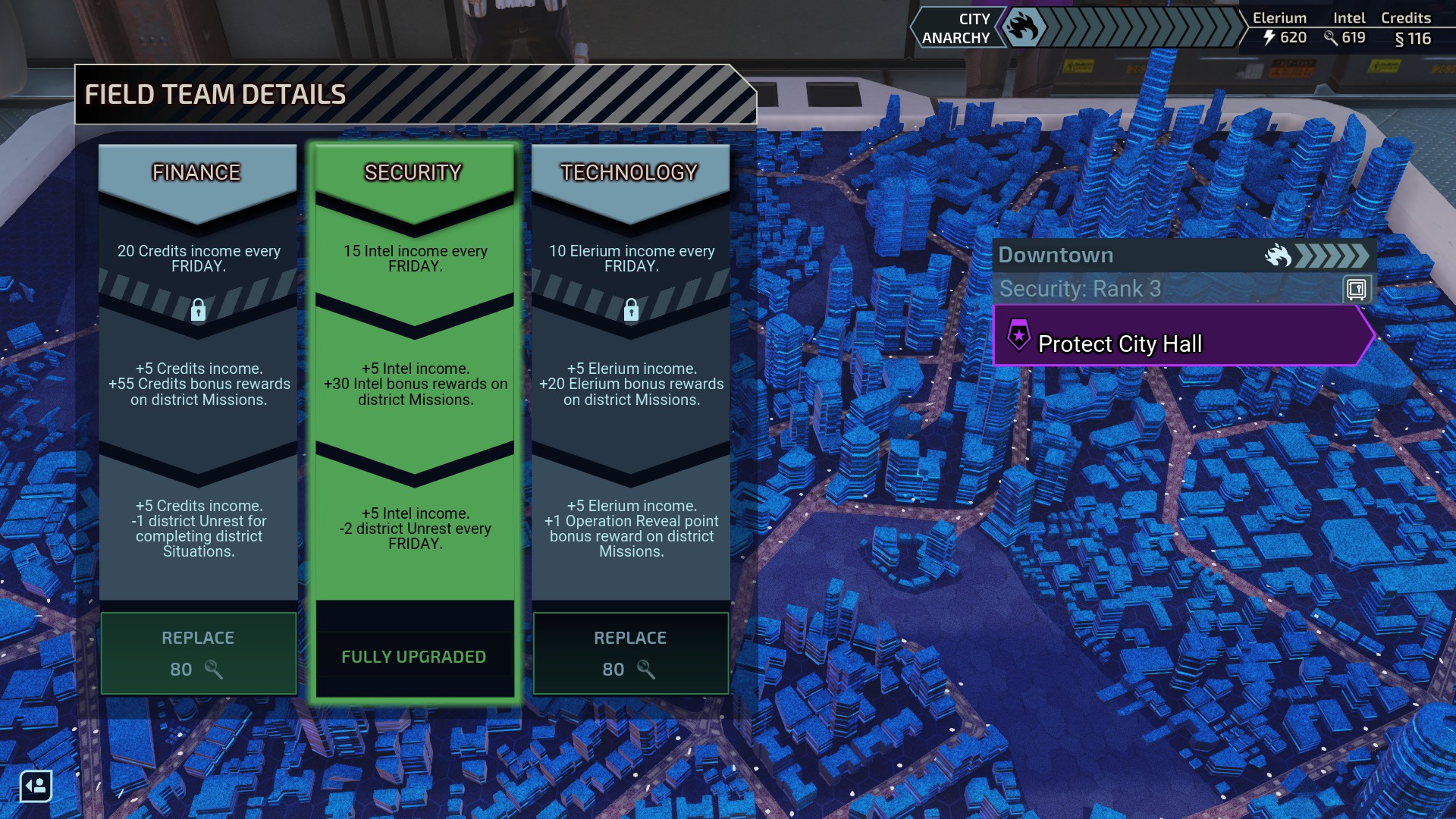 Speaking of Field Teams, the trouble early on is that they cost Intel, one of the three resources in the game alongside Elerium and Credits. Theyâ€™re fairly cheap at first, but every time you make a field team of the same type, the cost gets progressively higher. In addition, youâ€™ll also have to pay Intel to upgrade the Field Teamsâ€™ rank, with three ranks in total.

Buying Field Teams and upgrading them are important, since they unlock abilities that help to manage the Unrest and Anarchy levels while also generating resources for you. Hence, itâ€™s a good idea to focus on getting Intel early on, either by completing missions that offer Intel as rewards or by focussing on building Security Field Teams early on. This is partly because Security Field Teams generate Intel, but thatâ€™s not all.

At rank three, Security Field Teams have the nifty ability of reducing their respective districtâ€™s Unrest by two every Friday. It doesnâ€™t mean that you donâ€™t have to worry about that district any more, but it helps nevertheless. Youâ€™ll usually have at least two districts that are at risk of an Unrest increase simultaneously, but never all nine at once (on Normal, at least), so this weekly reduction means that you donâ€™t have to waste abilities on currently â€œdormantâ€ districts.

Since you can replace Field Teams (by paying Intel), you can always swap out some of your early Security Field Teams for others later if you feel like it. For me, I finished the campaign with at least half of my Field Teams being of the Security type, and didnâ€™t regret it one bit. Of course, this doesnâ€™t mean that you should neglect the other two resource types.

This guide is still in development... Red Dead Redemption 2's online component is out in beta form. We managed to play it for a few hours. We figured...

365 days ago, Apex Legends dropped on our laps without any fanfare nor teasers. No marketing spiel. No promises. No warning. In 2019,Â  this was un...

Feature
The Best Esports Games That Came Out In 2018