Streets of Rage 4 Guide: How To Get S Rank For Each Stage

Streets of Rage 4 is an awesome throwback beat-em-up that’s made for 2020; it also pays huge respect to the past 90s series. By now during the weekend you should have at least cleared the game a couple of times. If you notice, there are rankings you can get for each level from the easiest to the hardest difficulty. It’s not easy to get the highest ranking for each stage, try as you might.

This guide is solely for getting an S-Ranking for all difficulties and getting the “Maniac” achievement. While the enemy count and speed are higher and faster, the principles are the same. Let’s break them down: 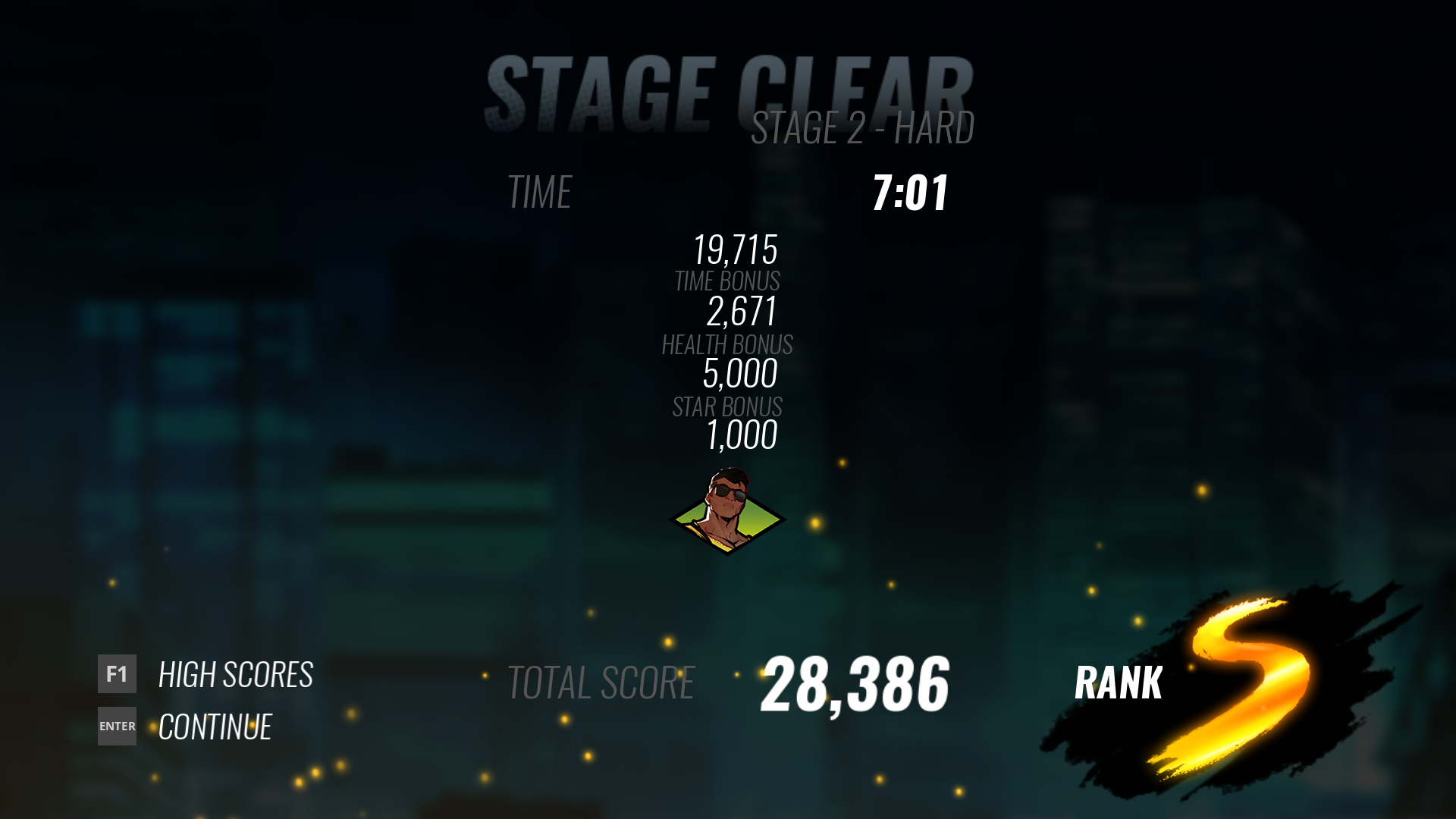 Your high score to get an S ranking is determined by the final score of the stage plus these conditions:

To sum it up, you can get an S (or A) ranking if you’re fast, take as little hits as possible (no hits = best),Â  and if you hoard your stars. Doing this should at least get your score to 20,000 and beyond, which is also a prerequisite for getting S ranks.

Obviously, it’ll be harder to get S Ranking at higher difficulties because of a higher score requirement. Plus, enemies can move pretty fast and strike you first even though you swore you hit the attack button first. There are also other factors to take into account that tie into the aforementioned conditions.

Which bring us to:

As with all beat-em-ups, the odds are usually against you in horde numbers and damage. Fortunately, you have a TON of tools at your side to clear the wave and stages as fast as possible with little casualties to yourself.

Keep Your Health Full (When You Can)

To get a good score and S-Rank, don’t get hit. Easier said than done, right?

This is to ensure you get bonus points when collecting food at high health, as well as get a life score bonus when you finish a stage. It’s tough, but once you play through a level at a certain difficulty long enough, the enemy deployment patterns will always be the same.

With this info, you can do preemptive attacks and kill off enemies before they add to the already-hectic mob. Good luck doing this in Mania mode though; the enemies move at ludicrous speed and can take quick potshots at you to break your combo.

Getting a combo chain going -continuously beating up enemies and keeping the combo count active- is a surefire way to get a high score for that S ranking. If you get hit during this, you get a “Break” signal and lose all of those sweet, sweet points. Ensure that your finger is always ready to pull off an invincibility frame-granting move to avoid these stray hits.

If you have to “sacrifice life” to cancel to a special move for combo chaining, do it. Your aim here is not to get hit as much as possible, so it’s good practice to chain moves for bigger rewards. You have to take a bit of a gamble to aim for an S ranking. So practice chaining moves.

If your combos keep getting “broken” by random Galsias and Donovans, you may want to practice keeping your combos to a medium length. When your combo counter is coloured purple, you might want to stop and cash it out lest you lose it all. Go for broke, but don’t get too greedy.

Low-Hitting Back Attacks Can Hit Opponents On The Ground

There are OTG moves in Streets of Rage 4. You just have to find out what they are to get the most out of your combos and optimal damage. Blaze’s back attack is one great example.

Never, EVER Use Star Moves

This one goes without saying. DO NOT use Star Moves to save yourself if you’re going for an S Ranking. At this point in time, you should be less reliant on super crowd control tools.

Pick The Best Characters For Your Score Run

Generally, you want to pick characters who have decent range with their hits and has good combo potential/corner carries. Examples include Blaze, Adam, and Floyd. Based on our playthroughs on all difficulties, they seem to have the best tools for safe poking, footsies, and first hits, which is essential for keeping their life at the max.

Unless you’re super confident with getting the first hit on enemies, go for Axel and Cherry. These two have arguably better combo properties and toolsets at the cost of crappy range.

Use The Best Weapons For The Right Character

The weapons on the ground can be useful, depending on the character using them.

Here are the scores you need to aim & surpass to get an S Rank (via Jerome Nivart). Keep in mind that Hardest and Mania difficulty’s base score is multiplied by 1.3 and 1.4 respectively.

Should You Tackle Retro Levels?

While time is a huge factor to your score, you only need a few minutes to take care of a Retro Level’s boss. Regardless of whether you win or lose, you’ll get out of the stage with full health, meaning you can collect nearby health items for extra points. In other words, do actively seek them out.

Should I use characters from SoR1, SoR2, and SoR3?

It depends. If you want your score uploaded on the online leaderboards, you can only use Streets of Rage 4 characters.

News
The PS5 Backwards Compatibility Dream Is Still On Track

Sony has been pretty tight-lipped on whether the PS5 will have full or partial backwards compatibility for previous generations. However, the company ...

Darkest Dungeon 2 goes back to the unforgiving and brutal turn-based combat gameplay of the first game, but shakes it up a bit. For one, part 2 is now...

Insomniac Games surprised all Marvel's Spider-Man players yesterday when they announced that the addition of the highly-requested Sam Raimi Spider-Man...