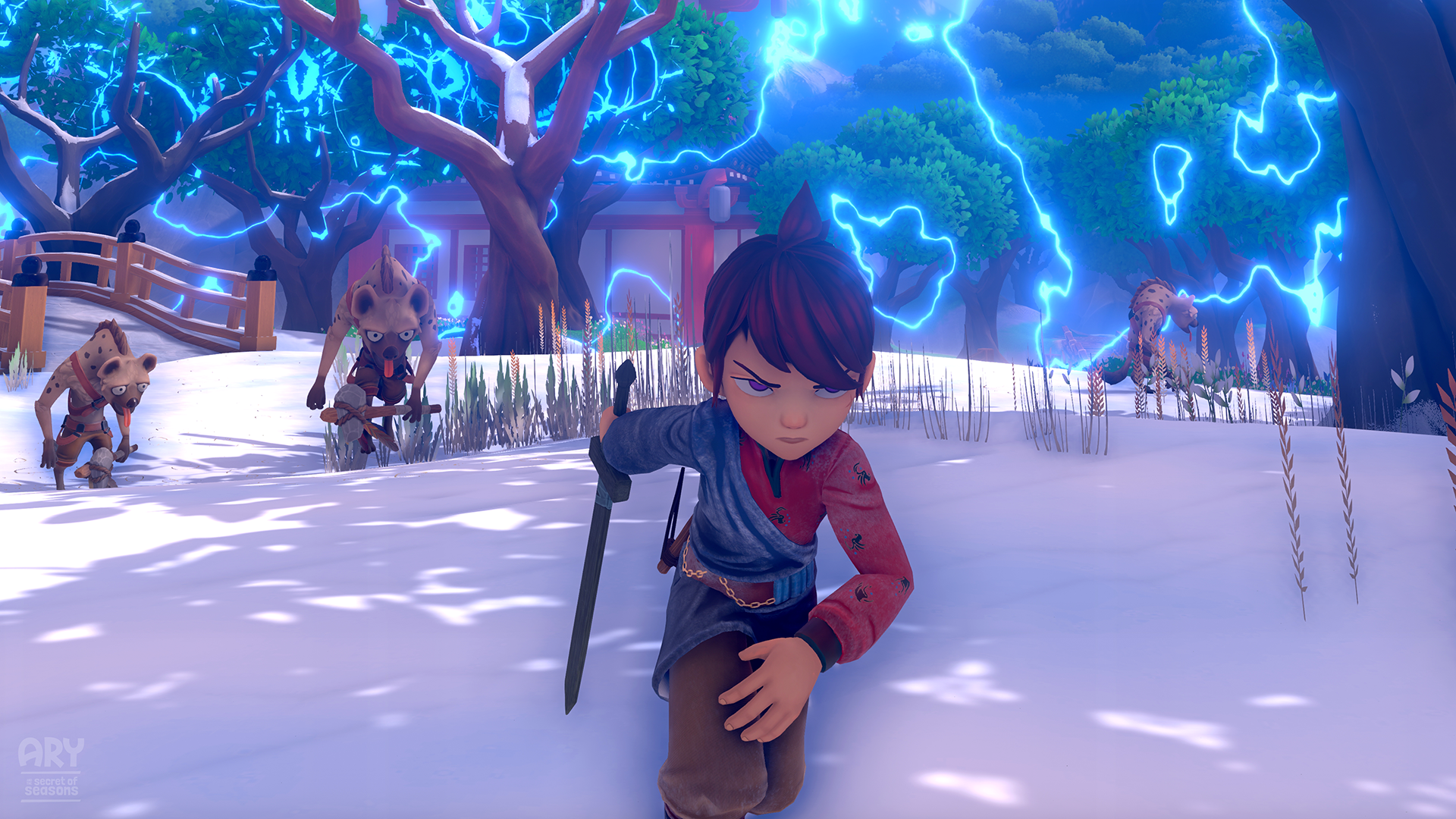 While Exiin’s intention may have been admirable, perhaps they’ve punched way above their weight class with Ary And The Secret Of Seasons. I have no idea what the problem might have been, but I’m not exaggerating when I say that this game is not only unpolished and broken, it feels incomplete and half-baked.

Here’s the gist of the plot in Ary And The Secret Of Seasons, which sounds like a cute little story that belongs in a Disney, Pixar, or Dreamworks movie. The world of Valdi is divided into four quadrants, each of which is permanently locked into one of four seasons (Spring, Summer, Autumn, Winter), with each having a Guardian and apprentice to keep watch over their domain. Protagonist Ary is the daughter of the winter Guardian, while her older brother, Flynn, serves as apprentice and successor.

The game begins in the wake of a tragedy that sees Flynn presumed dead, leaving their father a broken, catatonic shell. However, once a catastrophic event occurs that shakes up the balance of the seasons, it’s up to Ary to defy tradition and help save the world in place of both her father and brother.

There’s definitely a Mulan vibe to it all, as Ary is trying to adopt the burden of her father and brother. In the very beginning before she sets out on her adventure, Ary even cuts her hair shorter and dresses more like her father to look like more Guardian apprentice-material, just like the legendary Mulan.

It’s a great narrative setup, but the game squanders all its potential later on. All of that is thrown out the window amidst an oddly-paced narrative and an ill-defined antagonist. Certain stuff happens and then are never spoken of again. At one point, you learn that a major character is abducting children and forced them into child labour.

It was weirdly dark and at odds with the game’s overall happy-go-lucky tone of fighting anthromorphic laughing hyenas and vegetable monsters. The game introduces that and ignores it, never mentioning it ever again. It’s bizzare, to say the least.

Unfortunately, the different regions of Valdi are bland and not terribly interesting to explore, but the best part of the gameplay in the game revolves around the four dungeons, which are varied in design, from a jungle look to a steampunk one. There is a certain degree of exploration, but there’s not much incentive to do so.

There are chests and collectibles strewn around, but they are often marked on the map. Players just need to figure how to reach and obtain them. Currency in the game is used to buy cosmetics and upgrades, though the only way to get more money is through chests, as enemies don’t drop anything in this game.

Therein lies another problem, since there’s not much of a progression system for Ary, or any interesting way to develop her throughout the game. It’s absurd to expect massive RPG skill trees, but at least a more fleshed out and deeper system would be appreciated to spice up the combat.

The unique gameplay hook (and best part of the entire game) revolves around utilizing the power of the seasons to create localized spheres in order to beat enemies, solve puzzles, and traverse tricky platforming sections. For example, casting Winter can create floating ice platforms, while the other seasons can drain water from a lake or instantly grow climbable vines. Using these tools to manipulate the environment is exciting, and many of the game’s puzzles can be quite challenging.

Ary can also use the seasons in combat, though the fighting combat is easily the weakest part of the game. You attack with one button (with only one combo in the whole game) and parry with another. The lock-on mechanic is frustrating, and the collision feedback is non-existent, which makes for an unsatisfying experience. As previously mentioned, player also get nothing from defeating enemies, no EXP and no loot.

In most cases, it’s better to run past enemies and ignore them completely. The game would definitely benefit from dropping swordplay altogether and just focus on the puzzle aspect of the game. They feel tacked-on at best, and it’s clear that the developers didn’t put much effort in making the combat at least feel good.

While it’s true that bugs and glitches can be patched in future updates, that still doesn’t forgive my horrible experience with the game. So much so that I couldn’t even finish the game properly. The game is such a broken and buggy mess that I struggled to enjoy my time with it.

The last hour or so of the game is the worst, as I had to restart the game several times to overcome a recurring bug I encountered during a boss fight that prevented any progression, as well as my character becoming literally invisible in parts that I had to jump on moving and disappearing platforms.

Still, the game is brimming with potential. The dungeons are good (when Ary isnâ€™t turning invisible or when the game doesn’t bug out) and the puzzles are the strongest part of the game.

Unfortunately, the weak narrative, plain bad combat, and a plethora of bugs and glitches make it so that I simply canâ€™t recommend that anyone buy this ten-hour-long game. Well, at least not until the developer releases some patches to fix the game. As it is now, the game is just broken and needs more work.

Vampire Survivors Guide: How To Last Longer Than 30 Minutes