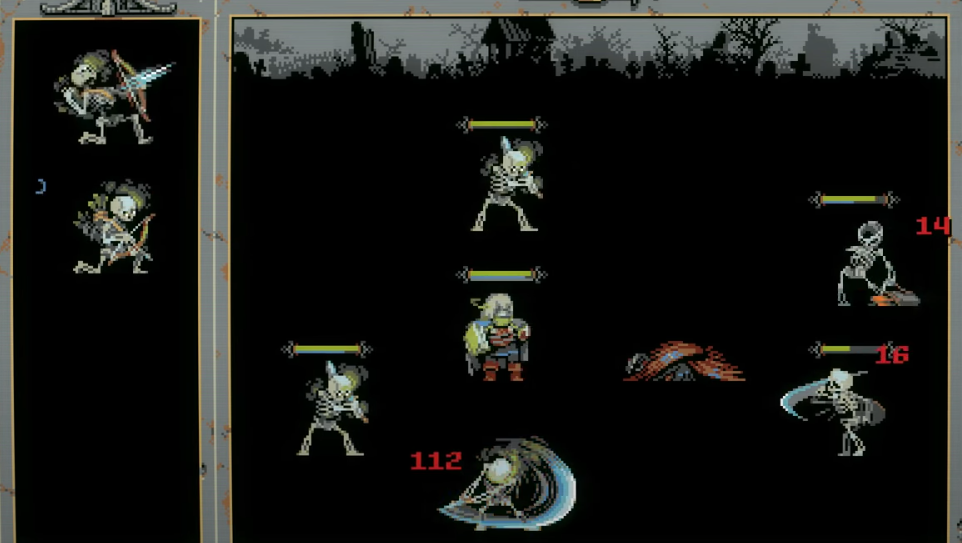 It’s hard to pin down Devolver Digital and Four Quarter’s Loop Hero with a genre label. It’s actually an amalgamation of a lot of things: a computer RPG with an 80s art style, a digital card game, a simulation, a strategy game, a roguelike.

What I can tell you is that all this combined makes for an awesome experience that is unlike anything you’ve played in recent years.

Here’s how Loop Hero works: you have a warrior hero who walks on a path in a loop in a blank void. During this expedition, you populate the place with dungeons and landscape stuff using cards you have. Battlefields, meadows, graveyards, outposts: these tilesets will either buff up your hero or generate enemies on the path. Killing enemies makes your hero stronger, either by leveling up to gain new skills or by picking up gear to equip.

Here’s the kicker: you have no direct control over your hero. He attacks, defends, and walks along the road automatically. It’s up to you to equip him with the best gear possible, create a challenging-yet-fair path to buff him up, and prep him for the oncoming boss fight once you’ve laid out enough pieces on the map to fill up a “boss bar” on the top right. It sounds daunting at first, but the tutorial makes it easy for you to follow and then play multiple loops.

Once you experience the first hour of Loop Hero to acclimatize to its mechanics & auto-gameplay, you will not stop playing. From its retro soundbites to the deck-building and base-building portion that helps create the foundation of your future grinding, it’s pretty hard to stop once you get going. It scratches that itch where you want to get a perfect run, but somehow you mess it up because you got greedy and didn’t realize that some of the enemies can attack you from afar and with rapid-fire precision.

You’ll be laying out tiles to give your hero the buffs he needs, but also summoning other new monsters that could wreck your hero early if you’re not careful. You can also build villages that heal you if you enter, but they buff a random monster with 200% extra health as a “quest creature” that gives you a nice reward if slain. Laying tiles out in the void in a certain way will yield different bonuses; like 3×3 mountains/stones giving a huge health boost to your warrior, or burning tree tiles with a Storm Altar for magic attack buffs.

You also can unlock classes with different playstyles; the Rogue favours quick damage & crits at the cost of low health, while the Necromancer just summons a skeleton army to overwhelm foes. Personally, I find the Rogue overpowered in the long run, but my playstyle in these kinds of CRPGs have always been aggressive with no regard to health sustainability. You can build a deck and create a loop just focused on that, while also praying to the RnG gods that you get the right equipment. And when you do, you’ll also have to make decisions on whether to keep them, or go for higher numbers but less abilities.

Thankfully time stops when you’re looking at your inventory, or hovering your cursor over an enemy. Heck, you can pause the game anytime you like to contemplate and take your time with the loop. Loop Hero is challenging and can screw you over, but at least it lets you think long and hard to plan ahead and wisely.

There will be a ton of tricks and surprises like these in store during your 30+ hour of the seemingly neverending cycle of RPGing. Simply put, Loop Hero channels the same “one more turn” addictive gameplay found in simulations like the Civilization series because of its loot-based gameplay loop, simple-yet-hard-to-master mechanics, and charming aesthetics. There’s a story in here where you’re trying to get out of the Groundhog Day scenario created by your Lich nemesis, but it’s just window dressing to the main attraction. It has its humorous moments though, especially with the camp leader being snide at your hero’s optimism and “amnesiac” tendencies.

I’ll keep this short and sweet: Loop Hero is a must-buy for PC if you want a fresh new take on roguelike RPGs in 2021. It combines the chillax structure of a clicker game, but will challenge you mentally with its deck-building and planning bits, so that your hero goes on the road challenged and ready for the eventual boss of the expedition. Loop Hero may have flashes of familiar genre tropes, but it’s truly a journey of its own. And a fruitful one at that.

by This Russian Studio Is Encouraging People To Pirate Its Game; Here’s Why | KAKUCHOPUREI.COM in March 30, 2022
Reply

[…] who want to buy the 2021 hit 2D simulation Loop Hero but are stuck in areas affected by economic sanctions are up the creek without a paddle. At least […]