Charles Dickens’s A Christmas Carol is probably one of the most adapted works in fiction, either directly or indirectly. I specifically refer to the concept of the spirits of Christmas Past, Present and Yet To Come (or Future). The idea of bearing witness to your own past, present and future is a powerful one; and one that can change any person for the better.

Combine a bit of that with a sprinkling of the butterfly effect concept and an unflinching look at the development of a realistic family through various generations, and you’ll have Armature Studio’s Where The Heart Leads.

Truth Is Stranger Than Fiction 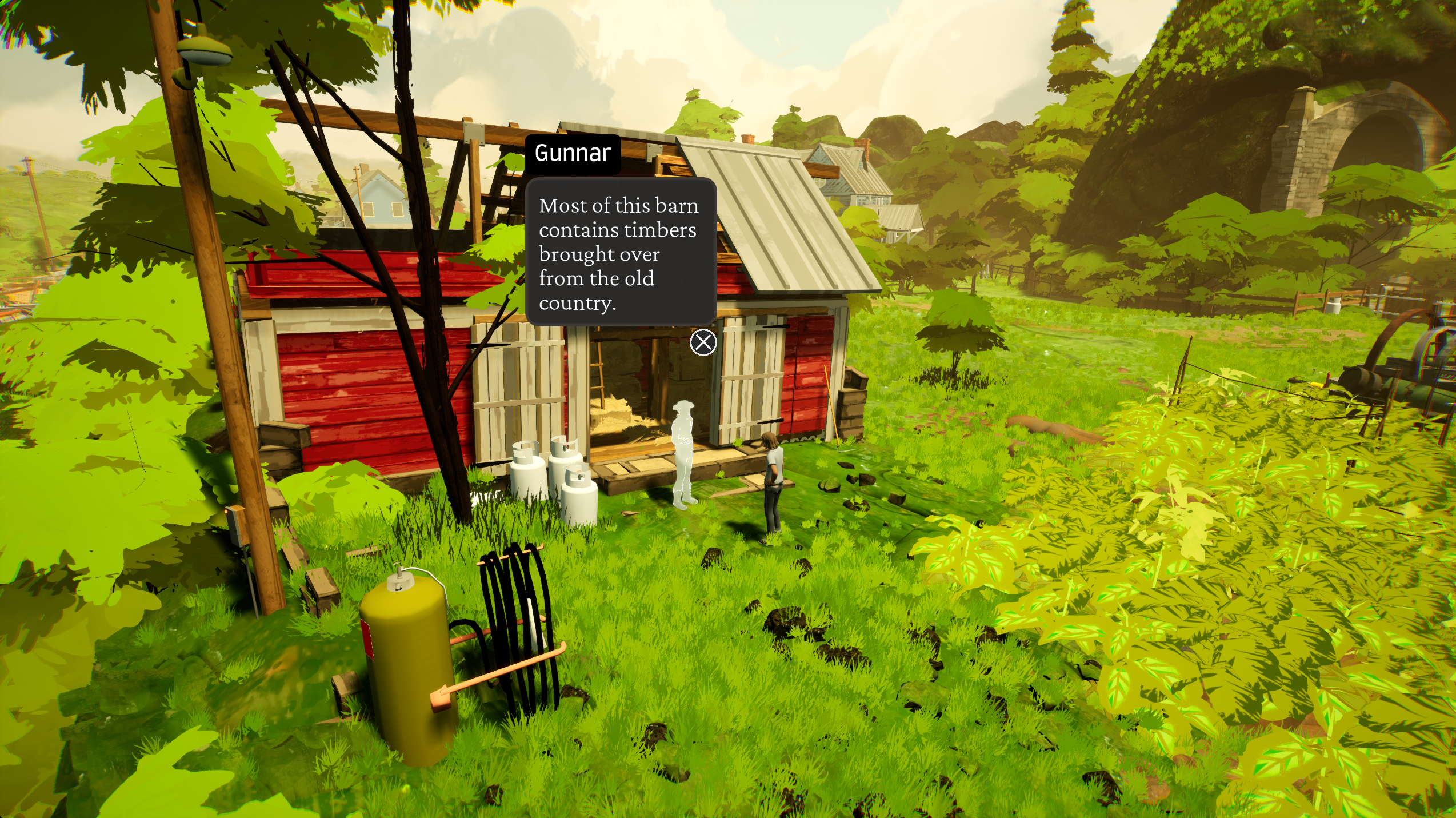 Where The Heart Leads is a narrative-driven adventure game about relationships spanning a lifetime of interactions where players make choices that change not only themselves and their family members but also the small town that the game takes place in; Carthage. Assuming the role of Whit Anderson, players will guide him through his past, present, and future as he reflects on his life and an entire lifetime of pivotal moments along the way.

If you’ve played other narrative-driven adventure games like Telltale’s The Walking Dead (or any title from them), Dontnod’s Life Is Strange, Quantic Dream’s Detroit Become Human or Supermassive Games’ Until Dawn, Where The Heart Leads is similar in that there is no conventional combat gameplay. Instead, it is an interactive and cinematic game where characters interact via dialogue choices and choosing their next action to progress through the story.

While the core narrative of Where The Heart Leads is heavily inspired by A Christmas Carol (where you experience the past, present and future of protagonist Whit Anderson), the core mechanic of the game relies on the butterfly effect (this exact term is even mentioned in the game). What makes this game different from other similar games with bigger budgets is that even the littlest and seemingly most inconsequential dialogue choice or action can change the outcome of what happens next in the narrative VERY drastically.

The best aspect of Where The Heart Leads is its brilliant writing. In all my years of playing video games, these are some of the most complex and realistic characters I’ve seen. The cast of characters who consists of Whit’s family members and friends/acquaintances are all complicated and layered. They feel love, fear, calm and anxiety, especially as Whit has to grapple with difficult decisions that affect them. Your life choices and actions can have vastly positive or negative effects on theirs as well, just like in real life. 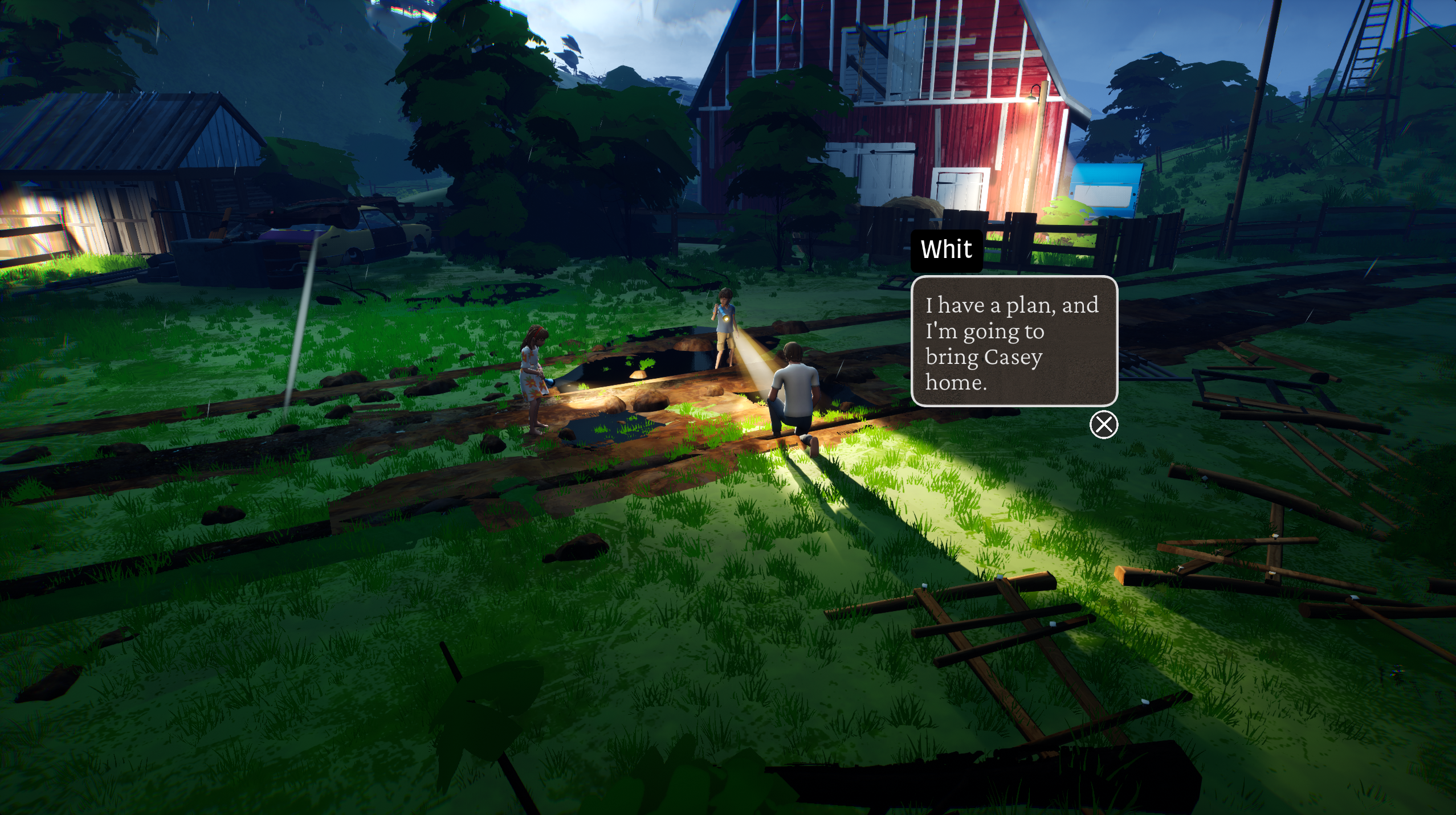 What impressed me most was how the relationships and dynamics of a realistic family are depicted in the game. They’re not simply dysfunctional just for the sake of it, but quite true to life, which I can attest to.

Some of the writing and characters in this game can make me uncomfortable and disturbed, albeit in a good way. It reflects certain aspects of my own life as well as those of my family members, and I’m certain, for many of those who are reading this too.

These elements can hit much closer to home than I would like in a game, but so would a movie or TV show with the same quality of writing.

I would also like to add that Where The Heart Leads is a lot more grounded than other games in the same genre. There’s no gimmicky time-reversing mechanic like in Life In Strange, nor is there much of a farfetched fantasy, sci-fi or horror element at play like Telltale’s The Walking Dead, Detroit Become Human or Until Dawn. At its heart, Where the Heart Leads is a family drama. Despite the past, present and future themes at play, they’re mostly linear in nature, so don’t expect actual time-travelling mechanics.

Where The Heart Leads also features collectibles with details that develop the game’s characters and world even further. these include journal entries, sentimental items, and other artifacts from Whitâ€™s past. These are optional for players to pick up and read, but they often feature unique art that usually affects the narrative in some way.

The game boasts over 600,000 words of dialogue, which means that there are so many different branching narrative paths in the game. That said, a single playthrough of the game can take anywhere from seven to ten hours (it took me seven hours) to complete, which means that Where The Heart Leads is not a game where you can easily play subsequent playthroughs in succession without getting hit by fatigue. By the end of my first playthrough, I was too tired to immediately try out another playthrough just for the sake of getting different outcomes. 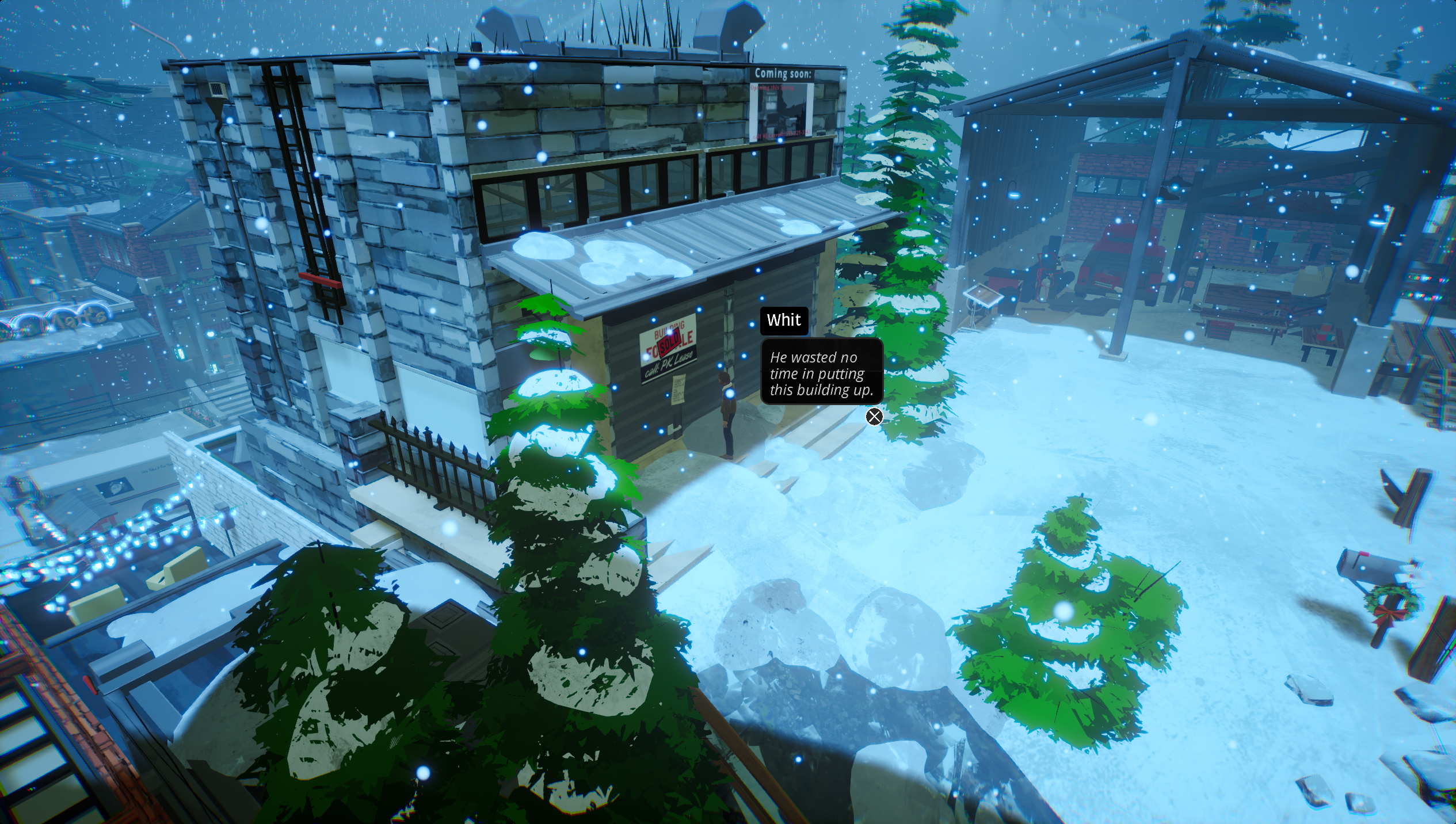 Still, that’s a lot of content for what is supposed to be an indie title. That length had to be balanced out by something else. In this case, the biggest weakness or disadvantage of Where The Heart Leads is the lack of voice acting and facial expressions. Unlike the games that I mentioned above as being the most similar to Where The Heart Leads (such as Telltale’s The Walking Dead, Dontnod’s Life Is Strange, Quantic Dream’s Detroit Become Human or Night School Studio’s Oxenfree), Aramature’s game doesn’t have voice acting or facial expressions.

All the atmosphere and emotional impact of the game is conveyed through its instrumental music and written words alone. While the music can be excellent at doing that, the game admittedly does suffer as a result. The game also boasts a beautiful watercolour-like aesthetic and visuals, but one aspect of the game bugged me. All of the other characters in the game don’t feature any details; they’re just blank silhouettes or shades with no faces. 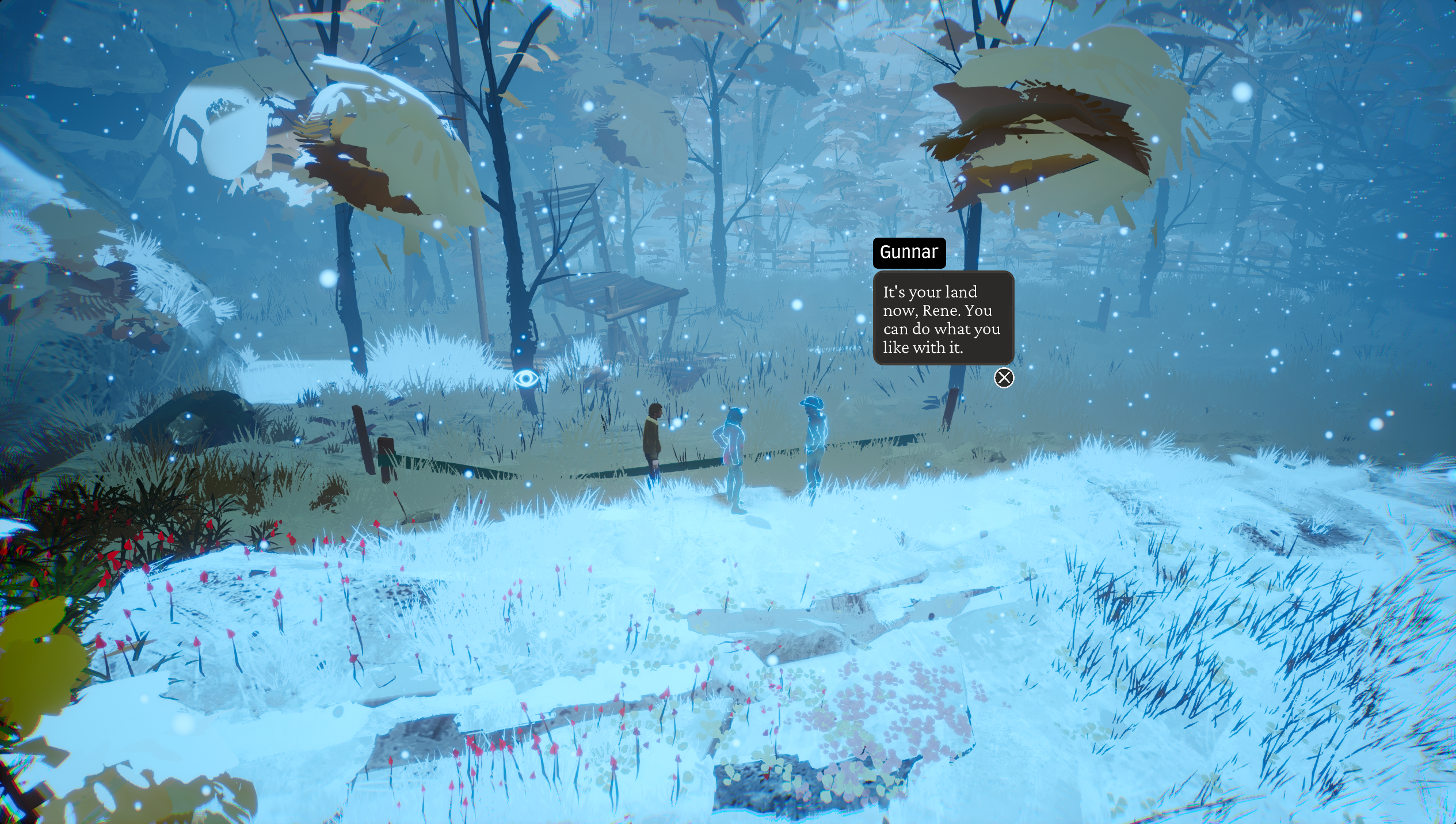 For instance, not even the game’s great writing could stir up much emotion from me as I realise that I’m interacting with faceless figures with no voices. One could argue that a good book doesn’t need either voices or visualization to stir up emotion, but Where The Heart Leads is a video game, which is a different medium. Come on, even Japanese visual novels usually have striking and emotive facial expressions and/or art to make up for the lack of voices. Where The Heart Leads has neither.

The other characters being just blank silhouettes also adds more issues in itself. While the figures are usually different enough between each character, I always had to go really close to them and see their names pop up before I can discern who that particular character is. This becomes a frustrating problem in bigger areas of the game. I’ve wasted time just wandering around just looking for that one specific character to progress the narrative. A blank silhouette can be hard to spot when it’s on top of a freaking building or somewhere inconspicuous.

Ghosts Of Past, Present And Future 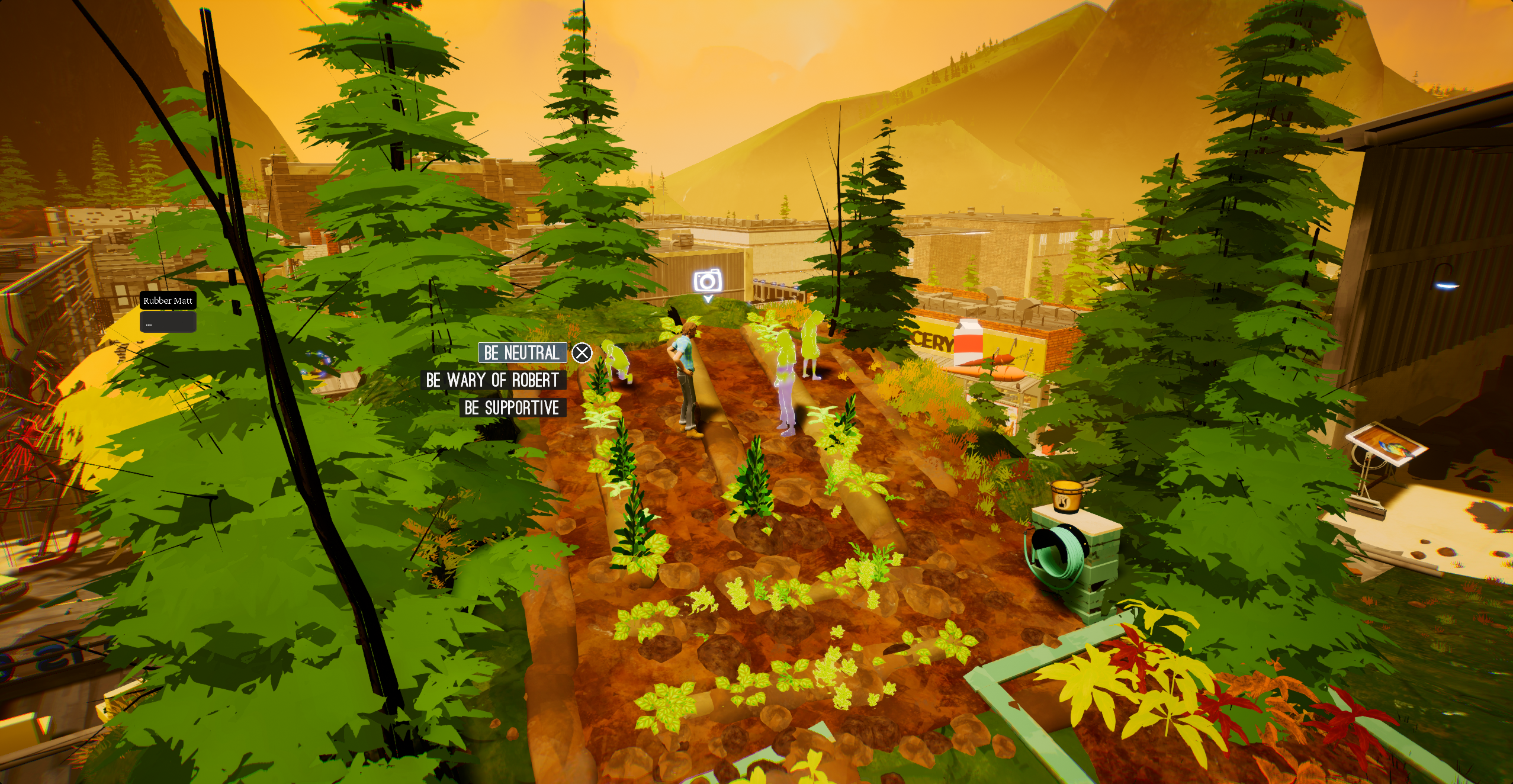 Where The Heart Leads is a gut-wrenching and relentless look at how life’s littlest decisions and actions can have the biggest impact on one’s past, present and future. The game may suffer from its lack of voices and facial expressions, but it makes up for those with good music to set the tone and vibrant visuals. This is a praise-worthy original title from the folks at Armature Studio.

Review copy provided by Armature Studios. Played on PS5. It is slated to release for the PS4 and PS5 on 13 July 2021.

World Of Warships is once again partnering with Warhammer 40,000, as they launch a brand new limited-time event packed with exciting features inspired...

During Bethesda's E3 2019 press conference, the company unveiled what's in store for Year Two of the much-maligned Fallout 76, and it's all highly-ant...

Reviews,Uncategorized
The New God of War Is An Action Adventure Epic For The Ages

Platform: PS4 Genre: Action Adventure, God of War Rebirth "Don't be sorry. Be better." I may be paraphrasing here, but that's the key message a...