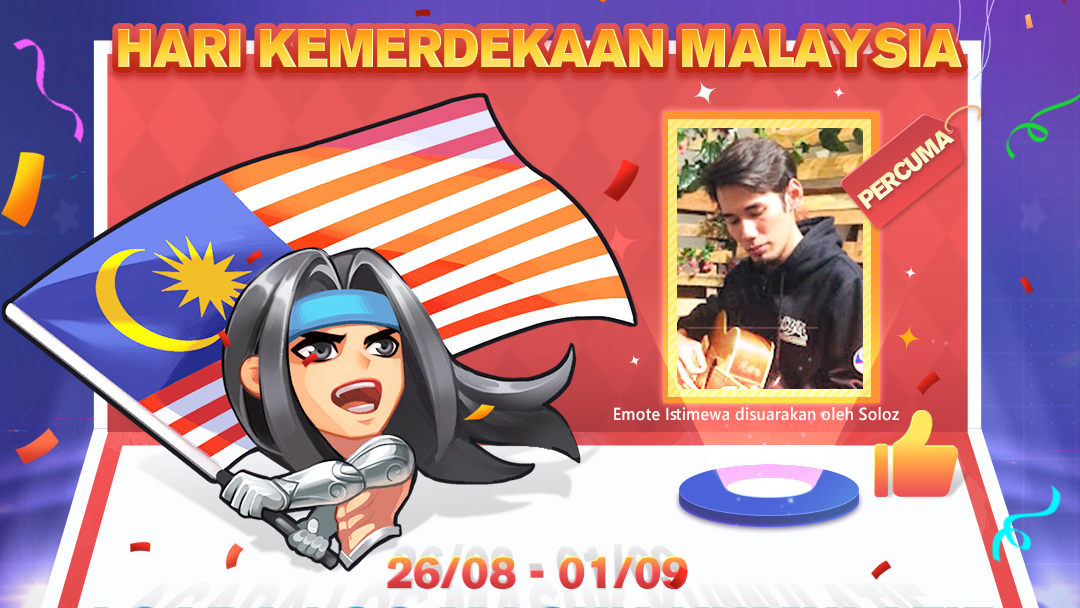 To obtain the emote, players need to log into Mobile Legends Bang Bang for five days – starting from 26 August to 1 September 2021. The dynamic expression features Malaysiaâ€™s national hero, Badang,Â  waving the countryâ€™s flag that will come with blue and red ribbons flying right around it.Â Â

Badang is the first Malaysian hero in the game, which was released in January 2019. A fearless fighter from humble origins, Badang exemplifies the spirit of the country. Voicing the character is Soloz, aÂ  prolific figure in the Malaysian esports scene. He has been streaming Mobile Legends Bang Bang sinceÂ  2016. An ex-professional MPL Malaysia player, Soloz organises charity streams and is a fan favourite amongst the locals.Â Â

“I am thrilled to receive the opportunity to be the first Malaysian to voice a Mobile Legends Bang Bang character. I am looking forward to watching the fans spam or use the emote during matches. It was a fun experience voicing the emote, and I hope for Mobile Legends: BangÂ  Bang Malaysia fans to look out for it.”Â Â

Besides the free emote, players can participate in the Transformers collaboration from 21 August to 12 September 2021. The campaign includes lucky draws and campaign objectives that enable players to win time-limited Transformer skins and in-game items.Â

Here are the questions we have ahead of the upcoming matches:

You can catchÂ all the action on the following MPL Malaysiaâ€™s socialÂ channels:

For more details and information, you can head on over toÂ the official website here.

The MPL Malaysia Season 8 will continue for a total of eight (8) weeks from 13 August to 3 October 2021. You can find the full schedule byÂ heading over here.

Itâ€™s already ongoing so you can catch the action right away: