Psychonauts 2 Guide: How To Brave Through Double Fine’s Latest

Psychonauts 2 is out now for Xbox consoles, PS4, and PC. It comes highly recommended if you love awesome storytelling and fun 3D platforming gameplay featuring mind powers and puns aplenty.

Here are some basic tips to maximize your experience as Raz the intern.

Psychonauts 2 isn’t a speedrun kinda game; it’s a 3D platformer with wide-open spaces and hubs filled with secrets and collectibles. You can even uncover a sidequest or two as you explore the many open areas such as the Motherlobe, the Quarry, and the Questionable Area theme park. Go hang out with Raz’s family, or talk to a bunch of oddball characters or two; there’s a lot of fun stories and jokes to dig up.

Figure Out The Best Psychic Skills To Rank Up First 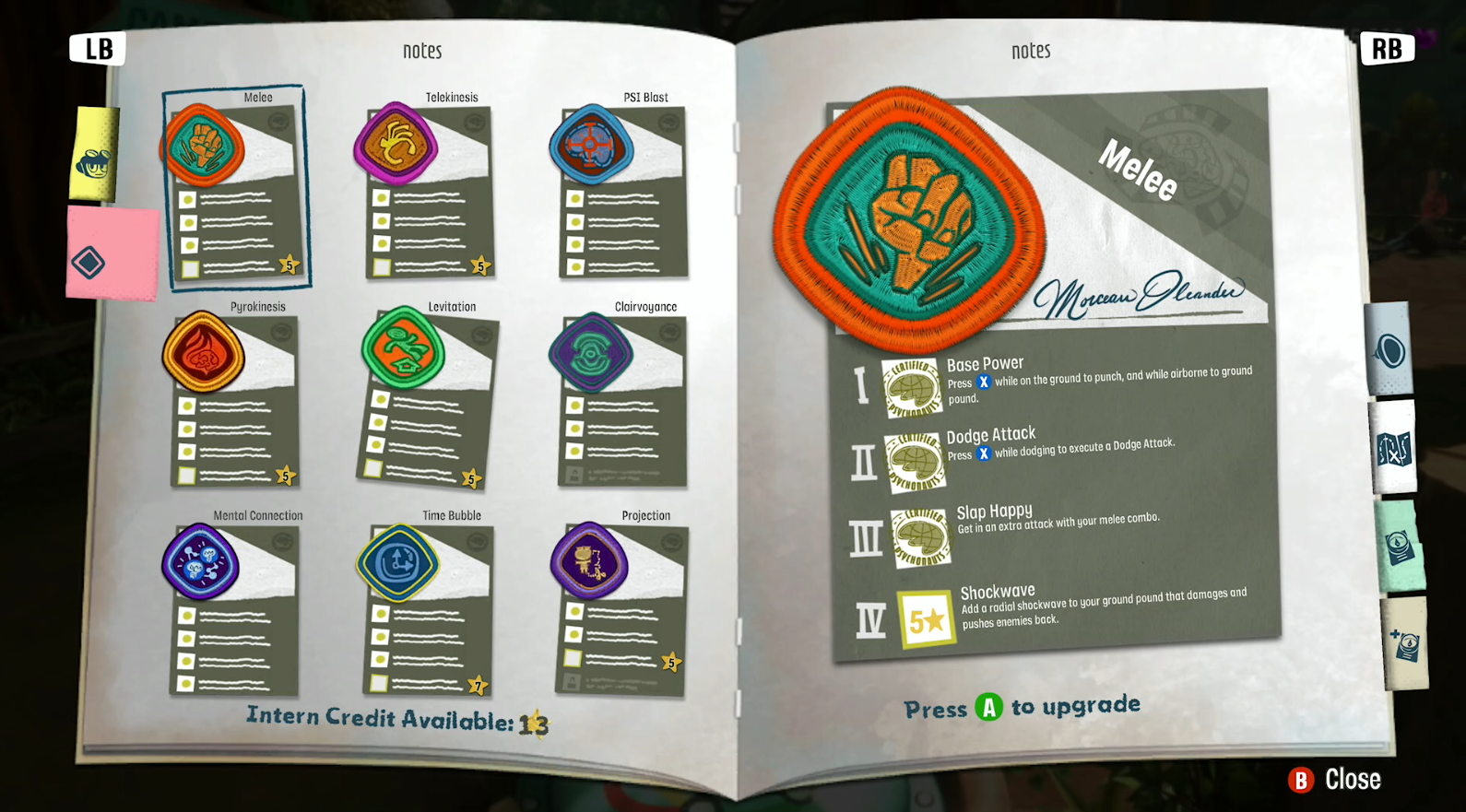 At the start of the game, you begin with these basic psychic skills: Levitation, PSI-Blast, Pyrokinesis, Telekinesis, Clairvoyance, and your melee attack.

You’ll gain new ones along the way, in this particular order:

We suggest spending your early Intern Credits on the following:

If you like using Levitation but don’t want to have it equipped on your trigger buttons all the time, try this tip. In the Controls option, turn on the following: “Use Triple Jump To Glid”e and “Levitation Ball Pulldown From Glide” (via Seth Marionello). This will allow you to seamless transition from gliding to Lev Ball on the ground.

That way, you have one extra psychic power to map (for combat purposes) and you can use Levitation without needing to equip and unequip it.

Once You Get Astral Projection And Fully Upgrade Your Mental Connection Rank, You Can Start 100%ing The Previous Stages 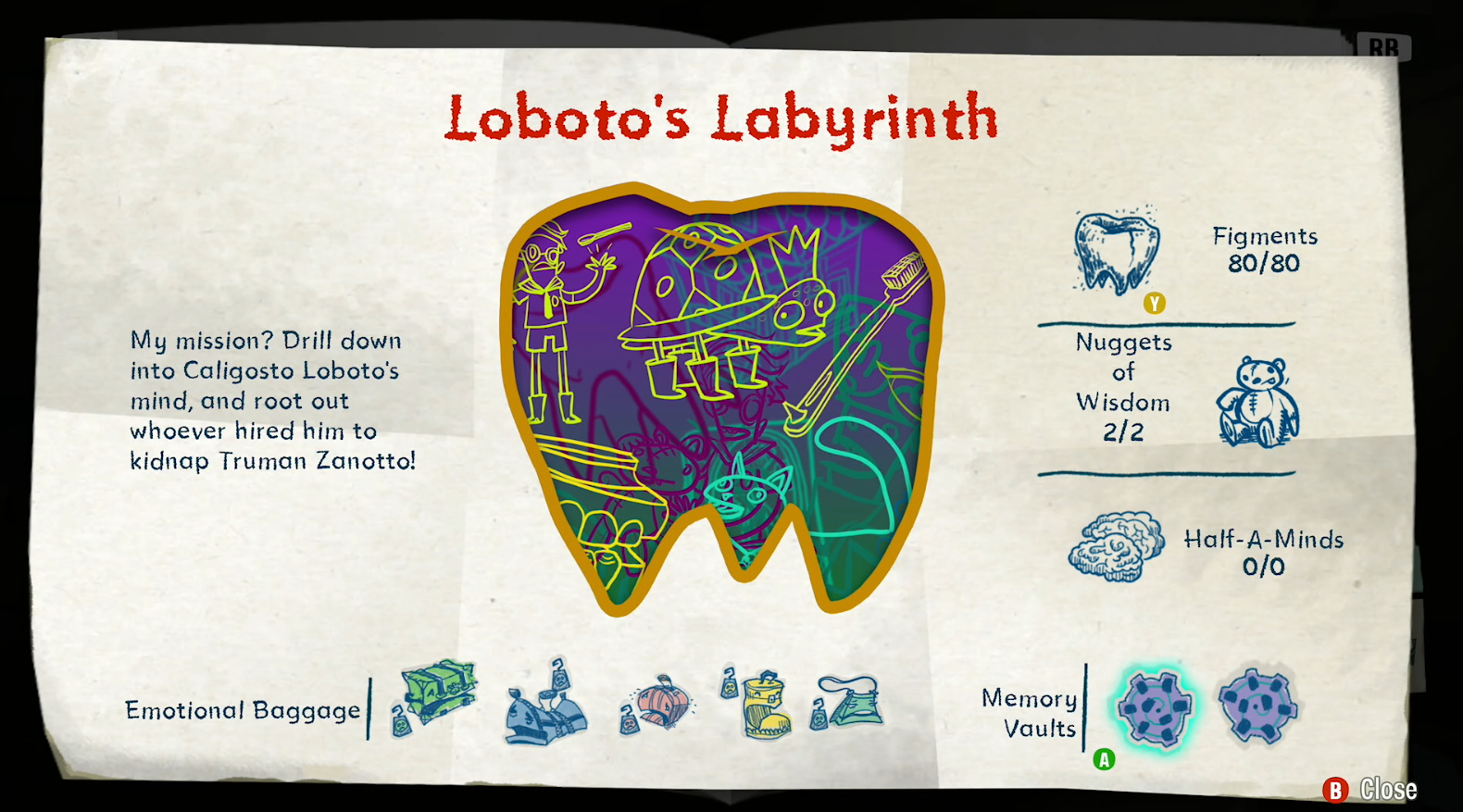 The Astral Projection and the Rank 5 Mental Connection powerup (where you can connect dark thoughts) are the last few powerups you need before you can collect every single thing in Psychonauts 2.

In fact, after you finish the game, you can continue playing post-game to get 100% in each level. You can use the Brain Tumbler in Sasha’s Lab to go to the Collective Unconscious to revisit past minds and fever dreams.Â In other words, don’t worry about getting locked out of collecting everything in the game while in the story mode itself.

All inputs are using the Xbox controller.

Rank I: Base Power. You have a punch and an airborne ground pound.
Rank II: Dodge Attack. Press X while dodging to execute a Dodge attack. Requires 1 Intern Credit to unlock.
Rank III: Slap Happy. Get in an extra attack with your melee combo.
Rank IV: Shockwave. Add a radial shockwave to your ground pound that damages and pushes enemies back. Costs 5 Intern Credits to unlock.

Rank I: Base Power.
Rank II: Overcharge. Hold to charge your blast for a bigger explosion upon release.
Rank III: Mind Mag. Gain an additional blast before having to recharge.
Rank IV: Chain Brain. On impact, bursts into smaller PSI Blast projectiles that do less damage.

Rank I: Base Power.
Rank II: Wrecking Ball. Your Levitation Ball will damage enemies if you slam into them at higher speeds.
Rank III: Pouncy Ball. Hold X to compress your Lev Ball, then release to bounce high in the air.
Rank IV: Levastation! Increases the devastation of Wrecking Ball attacks. Costs 5 Intern Credits to unlock.

Here are the walkthroughs for each level in the game beyond the first.Â It’s spoiler-filled, so here’s your warning:

We saw Rocketman, and it was an awesome musical biopic about the life and fabulous times of Sir Elton John, played masterfully by Taron Egerton. And w...

Ubisoft, in collaboration with AMC, has announced that The Walking Dead will be featured once again in Brawlhalla with Negan and Maggie joining the sq...

Platforms: Xbox One, PC (via Windows 10) Genre: Booming Action Open World Orb-Collectathon To answer your question first-hand: yes, this is the long-...