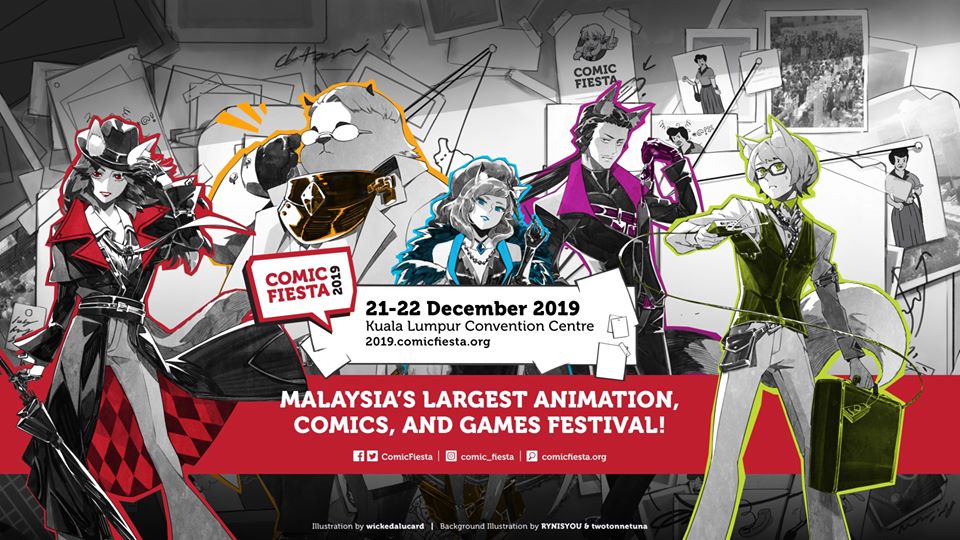 One of Southeast Asiaâ€™s largest and longest-running animation, comics and games (ACG) event will be returning next week. Comic Fiesta 2019Â is set to take place atÂ the Kuala Lumpur Convention Centre from 21 to 22 December 2019.

Hereâ€™s what you can look forward to at the upcoming event:

The PokÃ©mon Regionals will take place at the event. Attendees can also visit the MarqE tent and check out various other side events happening at the same time.

For gamers, head on over to the links below to pre-register for the tournaments :

This TCG tournament is hosted by Card Fight! Vanguard Malaysia. Entry is free for everyone.

The amazing work of Taiwan-basedÂ Krenz ArtworkÂ &Â Loizaå¡—é´‰ç‰† comes to Comic Fiesta 2019. Attendees can catch their merchandise in the form of art books, posters and postcards for sale at the premium art booth area.

Cosplayers will take the stage for 60 seconds at day one of Comic Fiesta 2019. Unfortunately, registration is now closed, but attendees can still witness the event.

Fans of DCEU’s most colourful bad-girl are invited to showcase their best Harley costumes in the Birds Of Prey Cosplay Competition taking place on day two of Comic Fiesta 2019.

The most outstanding Harley Quinn cosplayer will win her own private cinema hall for the Birds Of Prey movie premiere while other top cosplayers will also receive prizes.

Mariko Honda is best known as the amazing voice of Yuuko Aioi of Nichijou, Lion of Kemono Friends, Mazinger Z of Robot Girls Z and Uzume Tennouboshi aka Orange Heart from the game Megadimension Neptunia VII, as well as the Japanese VA of Eve from No Straight Roads, the upcoming game from Malaysian dev Metronomik.

She will be at Comic Fiesta 2019 alongside Metrononik founder Wan Hazmer to appear onstage and discuss more details about her character during a session at 12.30 pm on 21 December 2019.

She is best known as the voices of Rin Tohsaka in Fate/stay night, Hayate Yagami in the Magical Girl Lyrical Nanoha series, Rachel Alucard in BlazBlue and most recently Ishtar & Ereshkigal in Fate/Grand Order.

Monå¤¢ is a veteran cosplayer from Taiwan with the ability to portray all types of characters whether cute, cool or crazy with the most elaborate of costumes.

Hailed as one of South Korea’s top cosplayer, she is most well known for her League of Legends cosplays (especially Ahri), Overwatch Dva, and portrayals of various characters from the Fate series, as well as the current team leader of South Korea’s Cosplay Team Acrown and Korean representative for World Cosplay Summit 2014.

Having participated in various pop-culture events around the world, Hikarin easily dazzles fans with her radiating smile and charismatic personality. Capturing the physical attributes of the character with her unique make-up style, she also seeks to bring a character to life through the heart and personality.

Known as a cosplayer, model, cosplay competition judge and ambassador for multiple games and brands, Momoæ¯›æ¯› is a versatile personality who has had guest appearances in over a dozen countries.

ä½æ­Œå¥ˆSakana is a cosplay who is returning to Malaysia for the second time as she loves the energy and enthusiasm of her Malaysian fans.

Armed with memorable ACG songs across generations, the 5 Minute Heroes (5MH) is an Anime/J-Rock band formed back in 2013 with the goal of bringing hype to ACG fans with both new and old nostalgic tunes. They first started gaining recognition for playing at Comic Fiesta 2013, and have played in many other ACG events since.

The three ladies of Harmonia ACG are now backed by a powerful band and ready to bring rarely-heard melodies you would not get a chance to experience performed live anywhere else. A familiar face in the local ACG music scene for over 7 years, expect their signature renditions of Yuki Kajiura’s works as well as some special surprises just for the upcoming event.

The Crestfall Band is well-known in the Malaysian ACG scene having been around for 8 years and releasing their own EP album, DENY and single, ALTER x EGO in 2018.

Wickedalucard is a freelance digital artist who has worked with game studios such as Level 99 Games, Super Appli Inc, Union-mobile, ToTheWorld and Applibot Inc. working on Seventh Cross, Revenge of Dragoon, Dragon Tactics, The King of Fighters Card Game and Gang Road among others.

How To Get Tickets

Head on over to the official website here to purchase tickets for Comic Fiesta 2019. These are just a slice of everything awesome thatâ€™s waiting for you at the upcoming event. Have fun, and stay tuned on the event’s official Facebook page here.

Genshin Impact Tsurumi Island Guide: How To Clear The Mist