Demon Turf Platforming Guide: How To Conquer The Underworld

Demon Turf is out right now, and it’s the de facto indie-made platformer of choice for 3D and retro connoisseurs. It’s also a pretty tough game that ramps up its challenges later on past the first Apocadesert world.

Don’t fear: we’re here to help you out. Here are some quick tips on how to platform like a champ in Demon Turf!

Get Used To Beebz’s Set Moves

We’ll break down Beebz’s move sets and techniques below:

-Beebz can jump, double jump, and do that three consecutive jump technique that makes her jump slightly higher in her last third jump (ala Mario in New Super Mario Bros. onward). She can also wall grab and jump wall-to-wall.

-Beebz can jump, hover spin, then do a super horizontal far-reaching jump. She can also jump, double jump, and hover spin. She cannot immediately do a super jump after this technique though; she has used up her “jump actions” from the aforementioned sequences; she has to land onto a surface to reset her jump actions.

-A word about Hook Shots: Beebz cannot use Hook Shots if she’s already double-jumped. She can only use it if she isn’t in her double jump demon form.

-When Beebz uses Rollover in the air, she will immediately drop down onto the surface before speeding off.

-While in Rollover mode, you can revert back to Beebz’s form, then quickly transform into Rollover mode to slow down & speed up consecutively. Use this technique to take tight turns better while on courses.

Sort Out The Manual Checkpoint System

Demon Turf’s innovative feature is letting you decide the checkpoints of the game. If you see a platforming puzzle ahead that looks tough, just set a checkpoint flag.

You’re initially given three to work with, but if you have enough cake, you can buy a Mod in Forktown that lets you place more checkpoints. The game’s first world has Midgi suggesting spots to put flags at, but he doesn’t appear in later worlds, so you need to do it on your own. And yes, you will forget about it while you’re in the zone finishing a level, so our suggestion is take a breather when you’re done with a platforming segment for more than 5 minutes. Odds are you’re pretty far from the starting point, so plant that flag!

Don’t Worry About The Timer

After each stage, the game will take note of the time spent while in the level. You won’t be getting the best time if it’s your first time playing through a stage, so don’t worry. Just experiment with the level, and take leaps of fate and trial-and-error solution. Most of Demon Turf’s stages are pretty large, so take your time to explore and don’t fret. Once you learn enough about a stage, then you can attempt the time trial prize.

While you’re exploring, do check nook and crannies while pressing the left analog stick to find out where the level’s cake is. There are three per normal level and they are the currency used to get extra mods.

Play The Remix Stages AFTER Getting All The Demon Powerups

There are four bosses in Demon Turf that you have to defeat. After you conquer one of them, their world will then feature remixed levels with new traps, new platforming puzzles, and new challenges. Don’t do them straight away: just play through the normal versions of the stages.

Why? Because each boss will give you one new powerup that can be useful for the remixed stages. There are four to collect: the Hook Shot, the Rollover (ouroboros), the Glide Form, and the Time Out Bullet. They’re all required to get through the later challenges, so might as well power through the four worlds before replaying their remixed forms, right? 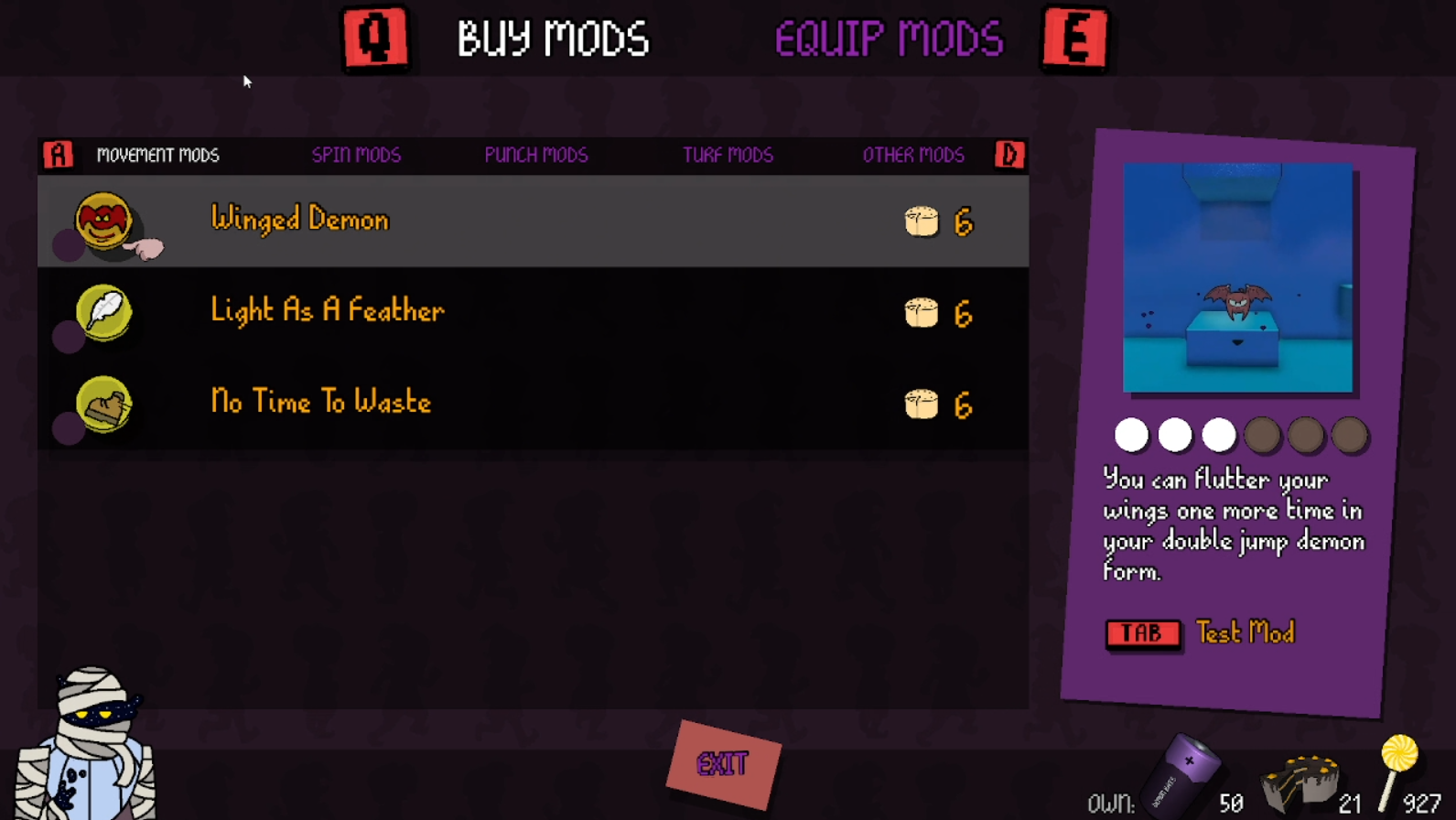 Once you’ve collected just enough cake past the 20 mark, you can spend them at the Mods shop. They can help make the game easier to play by a tad, with powerups like a second wing flutter for your double jump demon form, the ability to fall slower, and new punch mods to make your current punches less sucky. Most importantly, you can get the Flag Hoarder mod which grants you an additional checkpoint flag for those tougher levels with longer jumping sequences.

Each mod takes up a specific amount of slots. Beebz has 6 slots available by default, so you can equip at least 3 mods to sort your platforming out. If you’re not sure how they work, you can test them out at the Mod shop.

Cost: 6 cake
Slots: 3
Ability: You can flutter your wings one more time in your double jump demon form.

Light As A Feather

No Time To Waste

Cost: 10 cake
Slots: 2
Ability: You rise up a little when you use your spin demon form and so do enemies nearby.

Cost: 6 cake
Slots: 1
Ability: Your spin causes enemies to spin around you like a hurricane. Mash the button to keep spinning until you’re dizzy.

Cost: 10 cake
Slots: 3
Ability: You can charge your punch longer and it’s more powerful. However, movement is slower during charge.

Cost: 7 cake
Slots: 2
Ability: You dash toward your target before releasing your punch, increasing range and power.

Cost: 6 cake
Slots: 3
Ability: Your jabs are weaker, but each one builds charge towards a final charged punch.

Cost: 4 cake
Slots: 3
Ability: Spin while charging a punch to release the energy, knocking back enemies around you.

Cost: 8 cake
Slots: 3
Ability: You can yank enemies sideways making them spin in that direction.

Cost: 4 cake
Slots: 1
Ability: Hold movement forward or back to increase or decrease speed. Also increases side to side movement speed.

Time Out Tantrum (Time Out Bullet)

Cost: 6 cake
Slots: 2
Ability: Hitting an enemy directly with the Time Out Bullet will instead trigger a super slowdown effect on just that target.

Cost: 4 cake
Slots: 1
Ability: Enemies are less likely to detect you and lose sight of you quickly.

Cost: 4 cake
Slots: 1
Ability: Your camera is now equipped with a strong flash that can temporarily stun any enemies in the viewfinder.

Cost: 6 cake
Slots: 4
Ability: You have a fourth checkpoint flag available to place in a level. This can only be changed in hubs.

Cost: 8 cake
Slots: 5
Ability: A wisp circles around you, causing knockback on enemies it touches and repelling bullets.

Here’s a video on how to deal with each of the world’s bosses. Spoilers, obviously.

It's been a couple of weeks since the last PS4 exclusive that mattered dropped onto store shelves. So far, Ghost of Tsushima has been well-received an...