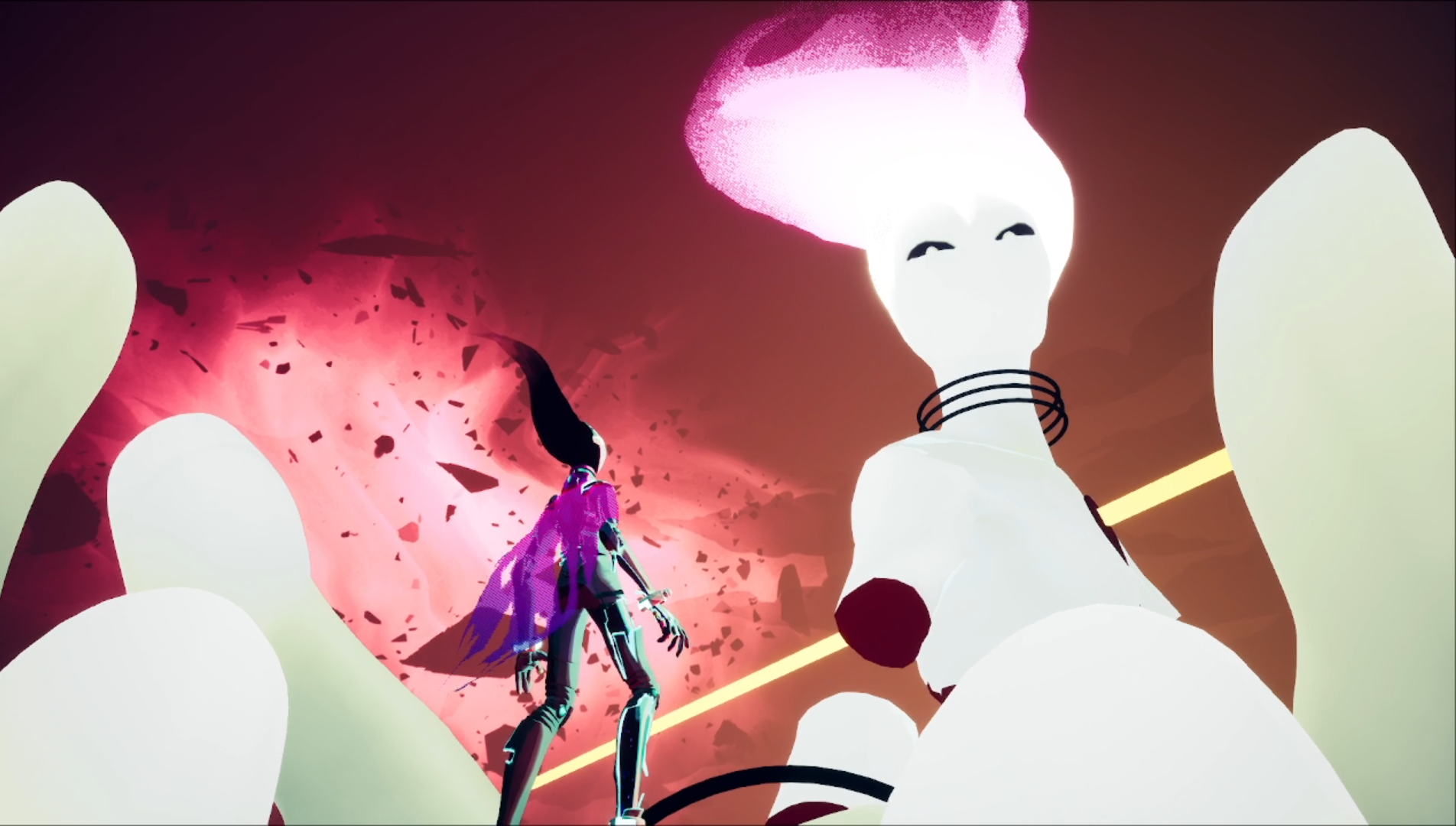 I never thought a marriage between two beloved games would work: Jet Set Radio Future and Shadow of the Colossus. Somehow or other, developer Heart Machine pulled it off with their latest offering Solar Ash.

You play Rei the Voidrunner, special space enforcers tasked with dealing with world-ending black holes and related anomalies. You are separated from your peers and need to figure out how you got stranded on an unknown planet, while also figuring out how to deal with lingering anomalies that are threatening your homeworld. You do this by killing them with your space needle attacks -it’s a literal needle you wield as a sword- while speeding your way around the alien planet with your Voidrunner skating and grinding skills ala Tony Hawk and Beat from that Sega skating game I mentioned. You can also grapple hook onto things to swing mid-air and also do a time stop move that lets you target anything within distance with your space needle.

Once you clear a stage of its anomalies, you then summon a giant colossus anomaly; this is where the Shadows of the Colossus comparisons come in. You have to climb onto the beast and stab its weak points in sequences using your space needle. If you take too long, the giant’s body turns red and you get vaporized, starting that segment from scratch. Each boss has three lives, so you have to do this three times, though not all the sequences are similar at all.

Solar Ash also takes some cues from the Super Mario Galaxy series where a huge number of platforming segments rely on that Nintendo game’s logic and level rules (the spherical kind). It can get surreal and take you some time to get used to, given the game’s esoteric feel and aesthetics. But I assure you: Solar Ash will be one heckuva unique trip. And what makes it work are the sublime controls. They’re tight as heck, and Rei herself is a breeze to play as since she’s fast and nimble, as well as gain lots of speed from boost-dashing and grinding on rails.

The level design and combat pedigree isn’t surprising, seeing as Heart Machine is the team responsible for the 2D Zelda love letter title Hyper Light Drifter. Moreso the game’s challenges, where Rei can only take a few hits, and the colossus-sized boss fights require split-second timing to hit all the weak spots. Later bosses require tighter windows of inputs, so don’t be too surprised if you take more than 10 tries getting through the first life of that multi-eyed spider beast while you’re cornered on a spherical stage with not much room to hide in. Exhilarating stuff, if I’m being honest.

Alas, the whole experience is about less than seven hours if you’re not spending time searching for the game’s Voidrunner Stashes and lost journals to get some extra goodies and suits. If only the game was a tad longer with one more stage or two, coupled with an appropriate few boss fights, then it would be perfect.

Still, this 3D action platformer is as good as it gets. Definitely a speedrunner’s delight, if you’re into that sort of thing. And if you love unfolding stories with that personal touch injected with high concept sci-fi, Solar Ash’s tale will delight alongside its mesmerizing visuals and score.

Anthem Is Probably Going To Be Bioware's Ultimatum

[…] new title from developer Heart Machine (of Solar Ash fame as well) will be called Hyper Light Breaker. It’ll be out on Steam Early Access for PC in 2023 and […]