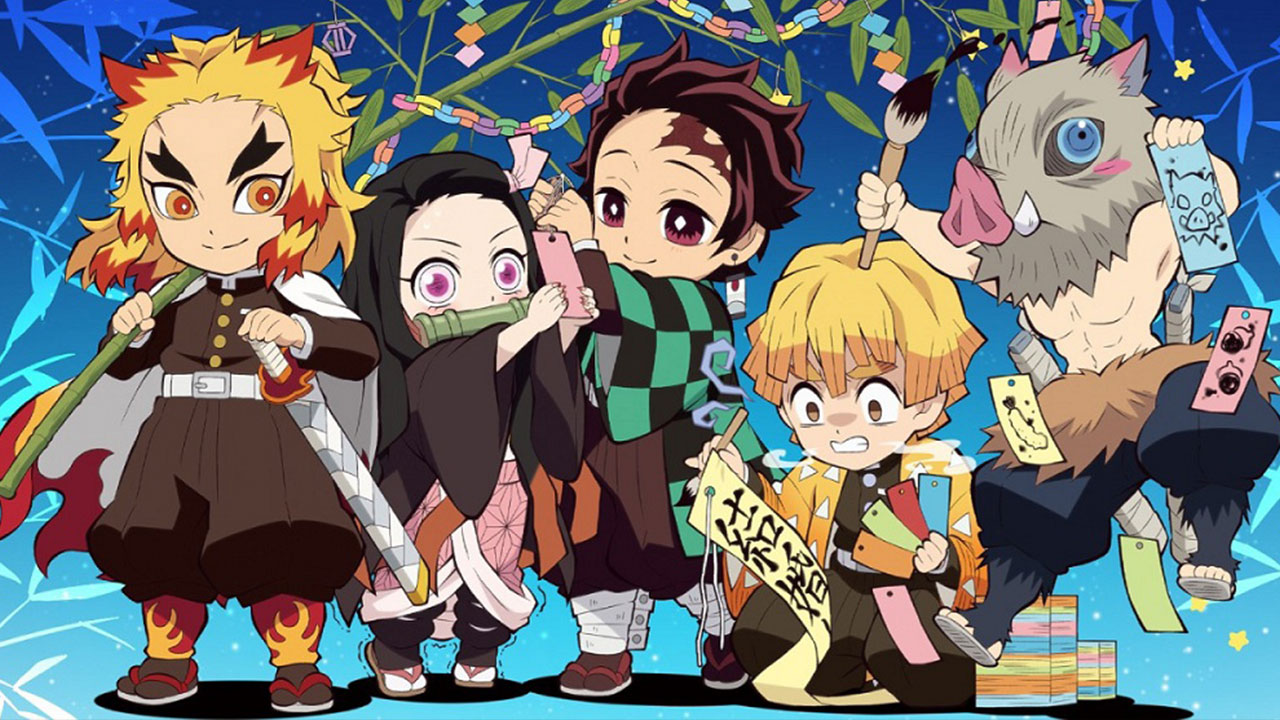 Demon Slayer is probably the best anime in terms of animation and being able to tug at your heartstrings simultaneously. Its story features many colourful characters with surprising depth.

Season 3 is gonna be a very long wait, so to keep ourselves busy we at KKP made a list of our favourite characters from the anime. Weâ€™re featuring faces that have made an appearance from the anime so far only, so tough luck, manga readers!

Here are the best 15 characters from Demon Slayer.

Starting the list off with a throw-away character with little screen time is an odd choice, I know, especially when it’s just a bird. But Chuntaro stands out from across all the “kasugai crows” the demon slayers employ for communication, being a sparrow.

Its real name is Ukogi and is Zenitsuâ€™s designated bird companion. It was revealed by the author that Chuntaro voluntarily joined the Demon Slayer Corps to avenge its family that was slain by demons. Thatâ€™s an incredibly tragic and moving backstory for such a tiny bird, which is why he deserves a place on the list.

Next up is Tamayo, one of the few friendly demons in the entire series. Tanjiro first meets her when he tries to save a recently demonized person which causes the altruistic demon doctor to join his cause to slay Muzan and find a cure to being a demon.

She clearly has a close history with Kimutsuji Muzan, holding a deep grudge against him. Her appearance in the series added mystery and depth into what demons can be, adding some comfort that Nezuko isnâ€™t alone in her struggles.

Makio, Suma, and Hinatsuru make up Tengenâ€™s harem, being his wives and the cause of envy for many fans. Just like Tengen, they are shinobi personally trained by the man himself and are quite capable, seeing as he trusts them enough to carry out undercover missions alone.

Aside from providing some *ahem* necessary plot to the show, seeing their relationship and how they interact with Tengen was oddly really wholesome.

A bit of a cheat, as heâ€™s my favourite character from the whole series but heâ€™s had little screen time so far, Sanemi Shinazugawa is the Wind Hashira of the Demon Slaying Corps. His position alone can speak to the testament of his skills, being that theyâ€™re the best of the best, but the countless scars covering his body shows that heâ€™s definitely no stranger to danger.

His personality is that of a gangster as he was really active in rejecting Nezuko, going so far as to stab her and even tempt her with his blood causing Tanjiro to literally butt heads with him. We wonâ€™t touch on his manga feats, but just be prepared for his character to be redeemed and fall in love with him.

One of the first characters we see in the series and was responsible for recruiting Tanjiro, the stone-faced Tomioka Giyu is the Water Hashira and fights using the Water Breathing style just like Tanjiro. Heck, Giyuu introduced it to him.

Despite not being that present in the anime, heâ€™s a popular fan favourite and frankly, the events of the show wouldnâ€™t be possible without him. All the moves that Tanjiro knows, he knows better but he has a unique ace up sleeve with the Eleventh Form: Dead Calm, which can nullify practically any attack.

Akaza is one of the members of the Twelve Demon Moons, holding the Upper Rank Three making him the third strongest demon in Muzanâ€™s cabal. He fights using martial arts-based Blood Demon Art and is a master of hand-to-hand combat.

He lives for the thrill of the fight and his only main concern in life is to find strong opponents to test his skills, which is what brought him to clash with Rengoku. Plus, heâ€™s clearly the coolest looking demon in the series. Just look at his design.

The perpetually-yelling Rengoku holds the Flame Hashira position and has big himbo energy. Just like the sun, heâ€™s full of energy and has a bright, brotherly personality, especially to his comrades. He fights using the Flame Breathing style, able to rend whatever he cuts into bursting flames with great speed and ferocity.

Heâ€™s considered to be the best Flame Breathing user in history and one of the strongest Hashiras. Although his appearance was short-lived in the series, he was our first real experience of what a Hashira can really do. Fun fact, heâ€™s actually partially deaf which is why he speaks so loud.

Yoriichi Tsugikuni is one of the most mysterious figures in the Demon Slayer universe. All we know is that he was a legendary demon slayer from way before Tanjiroâ€™s time, who was so strong to make Muzan himself shake in fear, going so far to send demons to kill Tanjiro immediately just from their resemblance alone. Tanjiro wears the same earrings as him and they bear a striking resemblance, right down to the hair colour and position of his head markings.

Tanjiro definitely has a connection to him, which we are excited to see revealed. Plus, heâ€™s voiced by freaking Kakashi.

The skeletal Gyutaro holds the position of Upper Rank Six, a position he shares with his younger sister, Daki. He fights using two sickles made from his own blood, and uses blood manipulation for his Demon Blood Art to create destructive blood slashes, along with poison.

His appearance from the show was a major plot twist as the heroes seemingly won only to be met with this unstoppable force that imposed this sense of hopelessness towards the end of Season 2. His backstory on the other hand was so tragic to the point we genuinely donâ€™t blame him for his actions. Also, his voice is perfect for his appearance. He’s definitely one of our favourite demons in the series.

Tanjiro Kamado is the main character of the series and itâ€™s his story that we follow. Having had his family slaughtered and his sister turned into a demon, his main objective is to find Muzan and cure Nezukoâ€™s demonhood.

Despite every reason to go John Wick, he still retains that soft natured personality and even grieves for each demon he slays, going so far as to say they are victims themselves. Ultimately, his main goal is to cure his sister and not for revenge, which speaks a lot for his core personality. He fights using Water Breathing style and occasionally his hard as iron forehead, but recently heâ€™s been relying on his Dance of the Fire God techniques he learned from his father.

Every good shonen anime has to have a main trio, and Zenitsu Agatsuma is one of the three main characters we follow.

One of Tanjiroâ€™s closest friends and is completely smitten over his sister Nezuko, he tags along with their quest and is a fellow demon slayer. He fights using Thunder Breathing style but only knows the first form and on top of that is a giant coward, to the point where he faints in fear.

Donâ€™t underestimate him though, as he sleeps he unleashes his full power and ends most of his fights in a single iai slash. Despite being a literal one-trick pony heâ€™s constantly ranked second in popularity polls but I donâ€™t blame him though as every one of his fights is a just spectacle to behold. Theyâ€™re short but always extremely good.

The calm and often aloof Shinobu Kocho was one of the first Hashiraâ€™s to make an appearance, but donâ€™t let looks deceive you. Behind her empty gaze is a calculative, vengeful force of spite. She fights using the Insect Breathing style which she created on her own, which relies on a needle-like katana that focuses on quick poisonous thrusts instead of slashes to compensate for her weak strength.

She is the adoptive big sister to Kanao Tsuyuri. She may seem friendly at times, but she often gives off this vibe that itâ€™s not her true colours and that she may be hiding a more terrifying side to herself. Sheâ€™d be the best girl of the series if Nezuko didnâ€™t exist.

Nezuko Kamado is Tanjiroâ€™s little sister and is one of the sole surviving members of the Kamado family. Having been attacked by Muzan himself, her family was slaughtered and she was turned into a demon. However, Nezuko seems to be the only person who can resist Muzanâ€™s influence and still retain her humanity (Tamayoâ€™s a special case) and she uses her new demon form to aid her brother as a demon slayer.

She uses pink flames for her Blood Demon Art and can alter her size and age at will, going from an adorable kid to adulthood in an instant. She is universally regarded as best girl and she does this without even saying a word, only communicating with muffled sounds due to the bamboo muzzle she wears.

Tengen Uzui is arguably the drippiest character in the whole series but his style is only outdone by his skills with the blade. Acting as the Sound Hashira, he uses the Sound Breathing style and a pair of cleaver-like katana that is attached by a chain. Heâ€™s also in fact a shinobi, which explains his penchant for stealth and the use of explosive bombs, which he incorporates into his breathing style techniques to create large explosions with his slashes.

His personality is that of charm and confidence with a strong debonair flair but also acts as a dependable leader in regards to Tanjiro and crew. Rengoku was a tough act to follow but Tengen makes him boring in comparison, which is why the fandom has collectively called him the Chad of the series. He has three wives; the dude is definitely a Chad.

Our token boar headed agent of chaos is none other than Inosuke himself. Having the most badass but also hilarious backstories in the series, he was raised as a child by a pack of wild boars, which explains the boar head. His personality is pure chaos and wild, constantly screaming and picking fights with just about anyone just like a wild boar would. He fights using the Beast Breathing style that was entirely self-taught, which gives him the leg up on most other characters that had mentors.

He uses two jagged katana in wild, unpredictable ways which is a clear theme to his character. Heâ€™s clearly the funniest character in the series but manages to show deep caring for his friends despite his aggressive nature.

That’s our pick for our top Demon Slayer characters, did yours make the list? We wonder what Hashira will be the focus next. We’re a long way from Season 3 but at least it’s been announced.

The Long-Awaited Evangelion: 3.0 + 1.0 Has Been Delayed Again

Dragon Quest Your Story Is Coming To Netflix Next Month