Who Pressed Mute on Uncle Marcus is a simple who-done-it story that uses a format that seems too out of place to justify its use. However, it captures the mundaneness of family conference calls pretty accurately, although to its detriment.

The story premise begins when your Uncle Marcus randomly video calls you begging for your help. It turns out he’s been poisoned and doesn’t have much time left & it’s up to the player character, Abby, to find out who amongst your dysfunctional family is the culprit. It’s wacky, in a good way. Conveniently, your mom’s birthday video call meeting happens right after the reveal and is the perfect opportunity for Abby the lawyer to do some snooping. It’s weird and a lot to take in, I know but essentially it’s a game of Cluedo but set within a Zoom meeting.

Black Sheep of the Family

So, turns out your Uncle Marcus (whom you have a close relationship with) is the inheritor of the family business and during a previous family gathering, an argument happened which leaves your whole family as prime suspects. Elements from Cluedo come into play here, where your objectives are to find the poison, find the proof and find the killer, so you can either save your Uncle Mark before he dies or at least find out who done it. Also, Marcus is played by David Wallace from The Office!

The rest of the game’s ensemble are members of your dysfunctional family, and when I say dysfunctional I mean it. The relatives you’ll be slyly interrogating are:

It’s established from the start your family is hiding some secrets and has been jealous of your uncle for ages. Their performances aren’t anything stellar, and occasionally gets cringy at times but it’s definitely not terrible. The game does a good job at making almost everyone believably suspicious, making you really pay attention to what they say so you can figure out the mystery.

You’ll need to pick up on the things said in the video meeting, such as the mother being deflective of her birthday since it reminds her she’s getting older and closer to death. This made me suspicious of her since why would you be worried about death unless you committed/attempted murder yourself? Or Aunt June revealing that she previously burned Uncle Marcus’ hand in the past and constantly verbally tells you she’d like to kill him. It’s stuff like these that make up the pieces to the puzzle and once you have enough you can accuse them, Cluedo-style.

Despite being set in a video conference call, it doesn’t use the interface of such mediums, instead opting for a more stylized look that reminds you you’re playing a game but just barely though, with the lack of proper engaging gameplay. This felt like a huge missed opportunity though as it would’ve been more immersive and given players more things to do aside from clicking on the choice prompts occasionally.

In the meeting the family plays a quiz game in a weird way to stay connected and keep up with each other’s lives. It’s played off like a game of Cahoot, (Oh y’know, that quiz game app you did in college when teachers were too lazy to teach) where each family member gets a turn to quiz everyone else on just about anything. This family is weird, man. It also seems really shoehorned in so that you can talk to each relative alone but just feels forced and unrealistic. 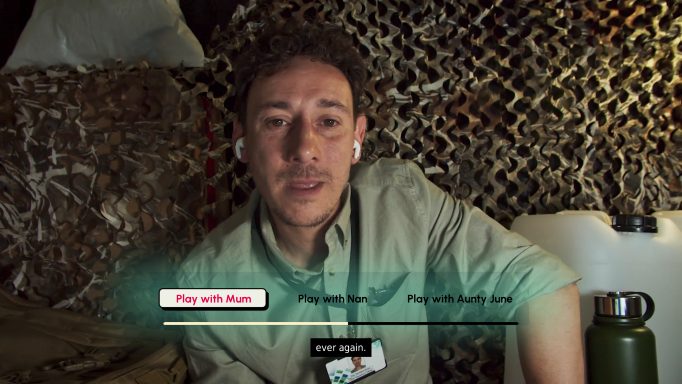 Is My Camera Working?

Game is divided into rounds where each member gets their turn to quiz everyone else. The family is divided into teams of two and that’s how you discover more clues, by teaming up with different relatives each round and pressing them for info. Player choice comes down to just picking between two or more options before a timer runs out. Either to answer a question or decide who to stick with to learn more clues about the case. It’s not very riveting.

Since the game’s events and people you mainly interact with are dependent on your choice, it’s meant to be replayed so you can get the full picture and find out the truth to the mystery. This however makes way for some continuity errors that I noticed. In a previous round, Toby and Bradley teamed up together but in the next round I teamed up with Toby. There was a prompt to ask more about Bradley but he told me that he hasn’t interacted with him in a while, which clearly isn’t the case. It seems too obvious to be a lie and feels more like an oversight on the developers part, which is something that happens not too often but enough to notice.

After every round you’ll get a round recap with a menu showing all the pieces of the puzzle you’ve collected, which you can click on and rewatch. It’ll also show locked clues you missed out, which can help in replays to guide you on which questions to pick so you can unlock them and find the culprit. 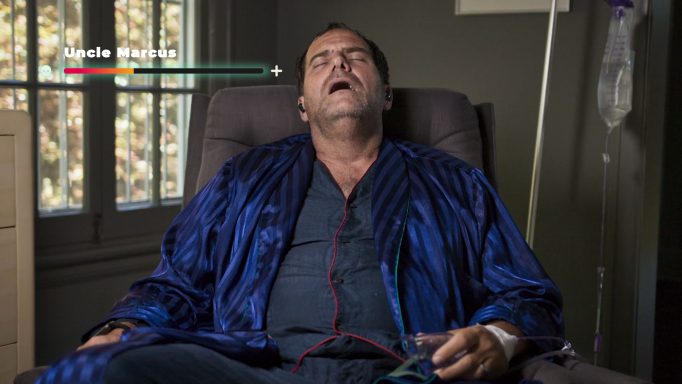 Despite the story premise that seems too wacky to not be charmed by, the whole experience felt really forced. It just seemed so off-putting to engage in this quiz format and the okay performances from each character didn’t leave me with something to remember by. Along with the continuity errors I found and the missed chance to properly use the video call format, Who Pressed Mute on Uncle Marcus misses the mark by a ton.

Tiny Tina's Wonderlands is out now, and to celebrate, 2K Games and Gearbox have released an appropriately chaotic launch trailer. The trailer is a ...

The next new wave of playable fighters for Nintendo Switch exclusive Super Smash Bros Ultimate was revealed during Nintendo Direct E3 2019. The Dragon...

Hope you didn't blow all your Primogems on Zhongli and his current banner. Mihoyo just released a new Genshin Impact trailer showcasing its latest 5-s...