We Played The First Six Exhilarating Stages Of Roll7’s Rollerdrome

If you ever want to relive the fantasy of being in a game show where killing is mandatory and roller derby skills are of equal importance, you might be enticed by Roll7’s latest indie offering.

There are no two ways about it: Rollerdrome is basically 80s neon wave-fashioned Tony Hawk Pro Skater and Jet Grind Radio combined. But instead of attitude and spray paint, you have a gun. And a shotgun. And a grenade launcher. And everyone’s out to get you. As main character Kara Hassan, you have to fight your way to the top.

Killing enemy waves isn’t enough to progress; you also need to complete different challenges to earn enough points to advance within the tournament brackets. Each bout puts you in a different locale from a ski resort to even an empty shopping mall with elevator handles to grind and glass panels to break through.

If you’re too young to know what a Tony Hawk game is, we’ll explain: you get dumped in a skating park with ramps and rails, you perform tricks with simple button inputs, you score points doing tricks and complicated moves, and you try to get a high score. Rollerdrome is a little different: you do all that AND you kill every House Card enemy on-screen, from melee grunts to snipers to even mechas with flamethrowers and rocket launchers. That’s where the guns come in. 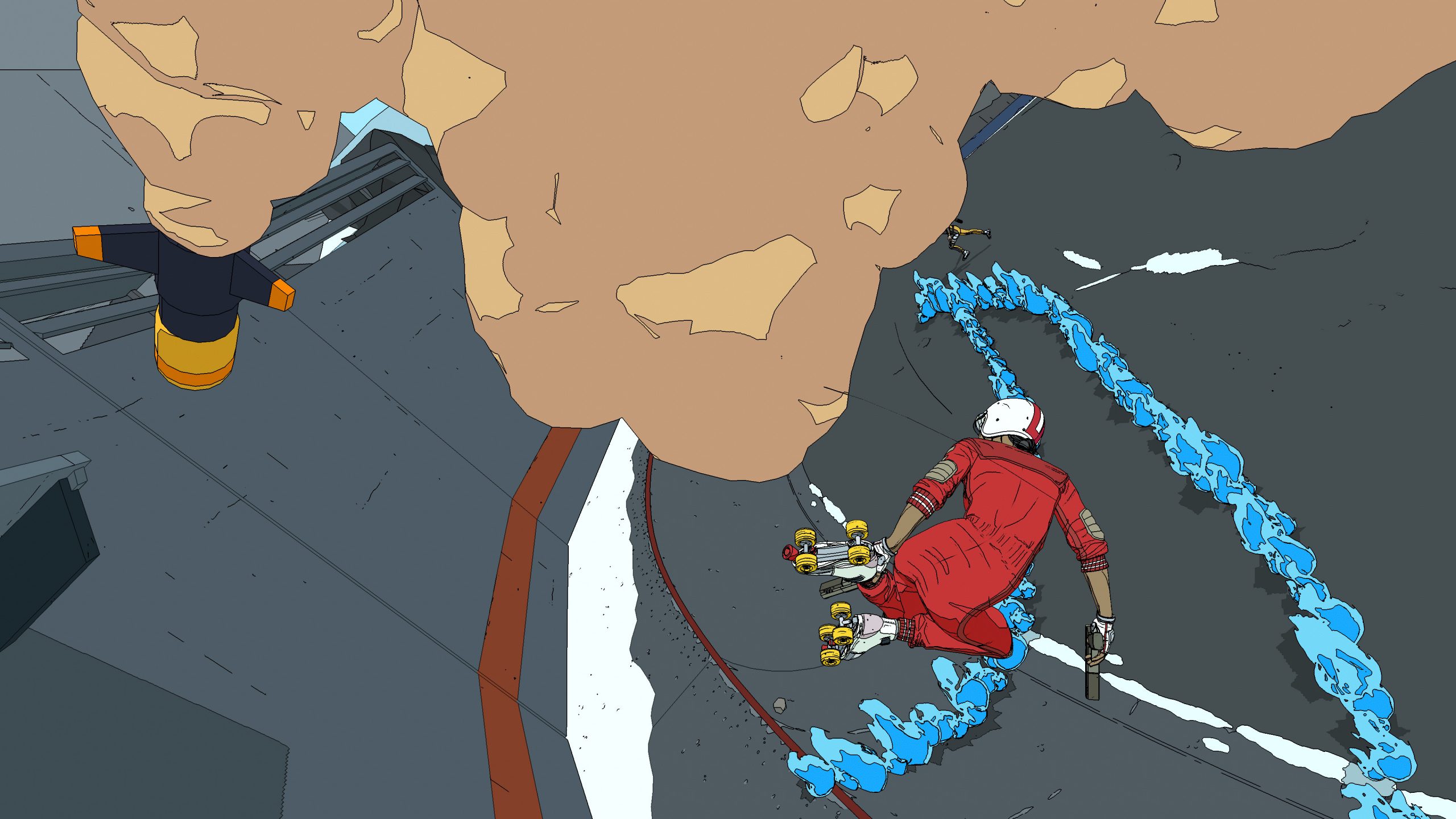 Kara is as skilled with her pistols as she is with her rollerblades, as well as with the aforementioned shotgun and grenade launcher. She can also lock-on targets so that the aiming doesn’t get in the way of the skating and speeding. But how do you reload, you might ask? Simple: just do tricks.

The more stylized you get with tricks, the more bullets you can reload. Some weapons like the Grenade Launcher require you to perform different consecutive tricks to fully reload, so you need to be on point with your jumping and tricks management while also avoiding enemy fire. Luckily, you have a dodge button to defend yourself and also change directions quick if you’ve built up too much forward momentum.

What I really appreciate is that there’s no wipeout if you seemingly flub a trick. Our heroine basically ignores all that and magically lands on her feet regardless of what state of trick-pulling you’re in. This is great, considering that if that fail state was in, 99% of its audience will find Rollerdrome incredibly frustrating seeing as the arena can get really hectic with the House Card enemies.

That said, the shooting and camera-pivoting may not be ideal in the long run. It’ll take most players, myself including, to get used to the shooting and skating and tricks-making. Even with the lock-on and time slow ability, I’ve landed more losses and did not finish a lot of challenges on my few runs because I’m still getting the hang of things.

Roll7’s fascination with dystopias-slash-sports shows like The Running Man (Schwarznegger version, not Korean version) is clearly showing with Rollerdrome, and we’ll all blessed for it. We hope the next few stages and challenges are just as tough-but-achievable. For now, here’s a video preview of the fancy stages you get to deal death in while performing skating tricks in style.

Feature,Main page
Let's Talk About The Best Soulcalibur Game Ever Made

When you bring up 3D weapon-based fighting games, the SoulCalibur series can't be beaten. From its remarkably fast-paced gameplay to its baritone-lade...

News
Lost Judgment Might Be The Last Entry In Series

Japanese site Nikkan Taishu reported that the sequel to action-adventure title Judgment, Lost Judgment, might be the last game in the series. Why s...