I’m not sure who wanted a follow-up to Yasuhiro Nightow’s Gungrave series, seeing as that action anime/video game series is more a product of its time: a violence-filled and visually-tailored experience that’s heavy with arcade action, easy controls, and short playtime. It was harmless fun, but it doesn’t really have a place in this current gaming generation unless its sequel brings in much-needed changes and modern touches.

Gungrave G.O.R.E. is basically the best of intentions gone wrong, since it’s attempting to capture the days of action gaming yore of the 2000s. Studio Iggymob’s effort somehow made questionable decisions that sour the whole deal, making it worst than it should be. 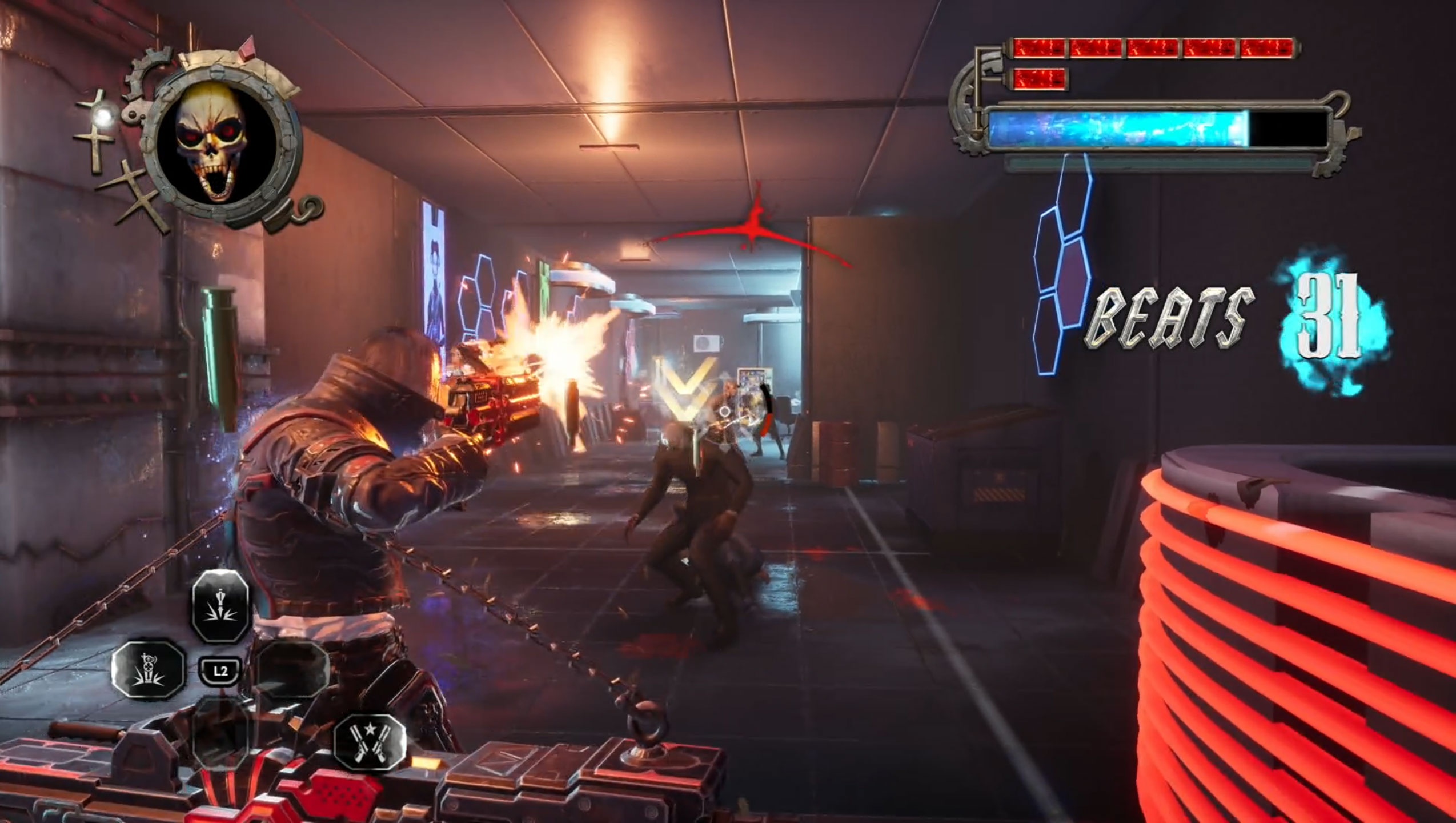 Gungrave GORE doesn’t give you a good impression in the first stage where you’re just going from point A to B gunning down random goons, monsters, and robots, though there are shines of a brainless-but-fun arcade action shooter game inside. Your main character Beyond The Grave has a pair of guns and a coffin for his melee attack; he doesn’t need to aim everytime to kill off foes and he can take it like a champ with his shield and high hit points. In the first 10 to 20 minutes, this doesn’t seem too bad, as Grave can get upgrades to his skillset as you progress further. Heck, you even get to visit futuristic versions of Vietnam and Malaysia, though the latter is just a bunch of silver corridors, a lab, and a red light district-lit casino.

There’s even a cool mechanic where some of your moves are unlocked temporarily if your hit count (called Beats) goes beyond 50. You can even recharge your shield with Death Chain moves (grab enemies from afar and then use them as meat shields) and your health with Demolition super moves. Some of them like the default giant rocket you kick to the missile salvos aren’t too shabby from a visual style standpoint.

After a lot more hours of linear corridor shooting with auto-aiming and banal combat, not much has changed save for infuriating objectives we’ll get to in a bit. The shooting itself doesn’t seem fun and invigorating, the main hero Beyond The Grave himself controls pretty sluggish and moves very slowly, and the levels are banal and rely on cheap parlour tricks like huge enemy waves and offense by attrition. You also have terribly timed missions like getting to the end of a train’s segment before you get cut off by the tunnel, only to have waves of enemies with bullet sponge-level health bars even for grunts to weigh you down.

This action game heavily favours its opposition, as it makes controlling a badass hitman less appealing than it should be. Compare this to other action titles like Bayonetta 2 and Devil May Cry 5 where the action slowly ramps up the difficulty and gives you squishy minions to play with before unloading the big guns in a structured manner. Those games also give you better defense options than a dodge that only works half the time when it feels like it and a Death Hurricane that ricochets rockets back at foes.

Your melee is supposed to keep close-ranged enemies away from you, but it feels ineffective at doing so most of the time. You’ll die a ton on the game’s default difficulty because the enemies overwhelm you and have better attacks that knock you down and stun you; you really have no surefire defense if you’re cornered by 20+ goons. I do not mind the game being cheap in the last few stages, but this is just the second stage and beyond; give your players a sense of empowerment instead of tearing down their expectations saddled with crappy controls and action game feels.

And when you’re in control of the situation? The game gets dull thanks to dumb enemy A.I. and bosses you can defeat by just strafing and firing them in their blind spots without any variation. 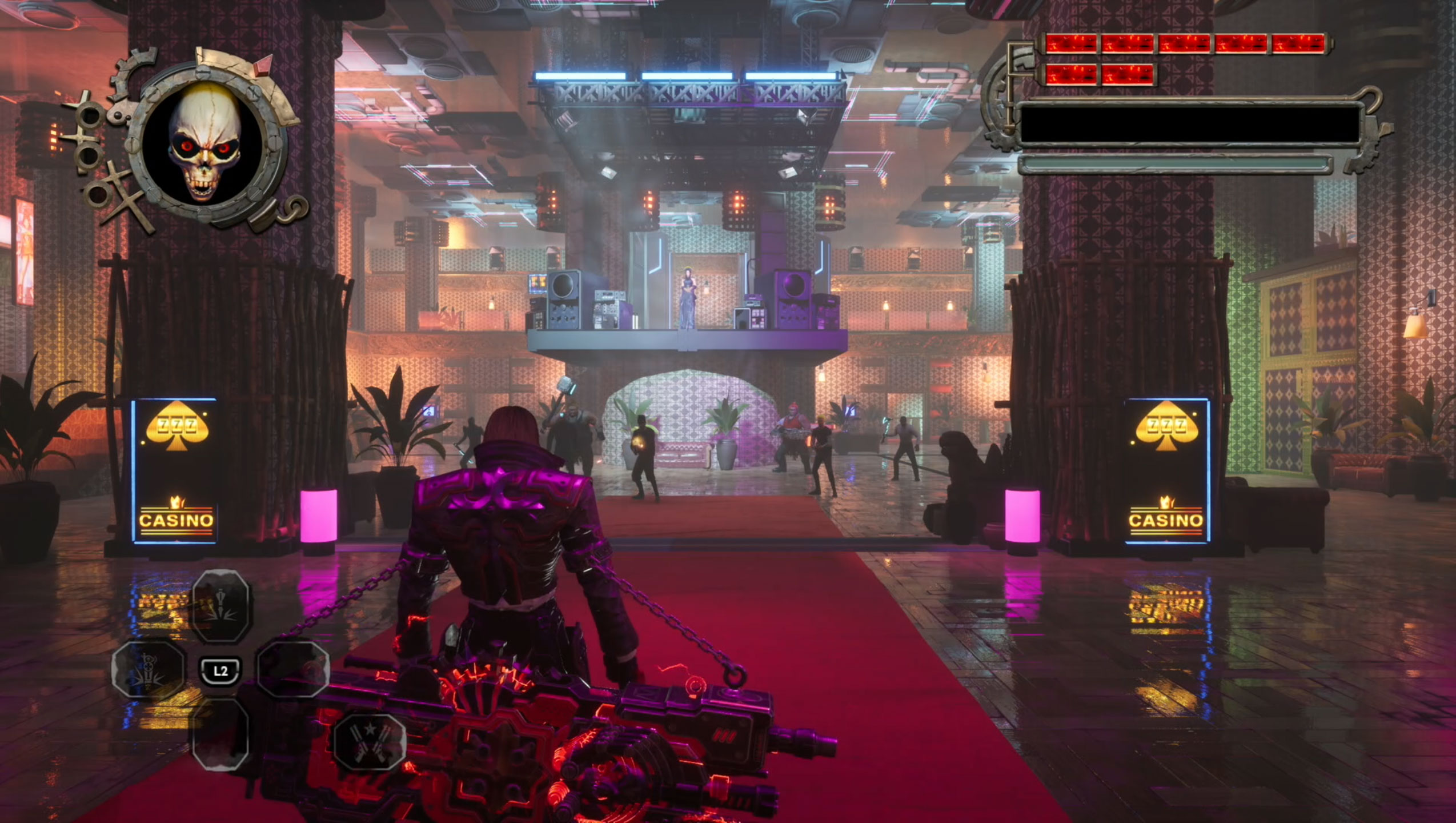 Gungrave G.O.R.E should be experienced just as a textbook case of how not to make an action game with a mid-sized budget.

It’s banal, wears out its welcome length-wise, awkward to play and control, gets downright cheap to pad out its difficulty, and just doesn’t feel fun for an M-rated anime game featuring a badass hitman with guns and a giant coffin. I was told that there’s a Day 1 patch that will fix some of the A.I and boss fights, but it’s just not that exciting overall. In fact, the devs and publisher would be better off remastering the previous two Gungrave games for the PS2.

It’s amazing how this 2022 follow-up ended up being a huge downgrade that didn’t learn & improve jack from a pair of its prequels made 20 years ago; that really takes talent. Yasuhiro Nightow’s cool-as-heck series deserves better than this mess.

Feature
Eldest Souls Guide: How To Be The Best 2D Pixel Soulslike Swordsperson

This guide is still under development. Eldest Souls may have a conventional name, but its gameplay is anything but mundane. It's a boss rush game w...

When I wrote that headline, I thought I would a little bit more surprised at what I was typing but seeing as how we're talking about a Yakuza game, no...

News
[Rumour] Star Wars Battlefront 3 Is In The Works

It looks like Star Wars Battlefront 3 might be in development and we could even be getting an announcement from EA soon. Speculation on a new game beg...