Star Ocean: The Divine Force – To Boldly Go Where Every JRPG Has Gone Before

Star Ocean is one of the more niche JRPG franchises, even compared to the likes of Tales or other mid-tier series. However, like most franchises, it has only lasted this long (since 1996’s Star Ocean) because of its loyal fanbase and because it distinguishes itself by being more overtly sci-fi, as well as being unique in that the combat has always been in real-time, just like the Tales franchise. Star Ocean: The Divine Force is the sixth mainline entry; is it any good? 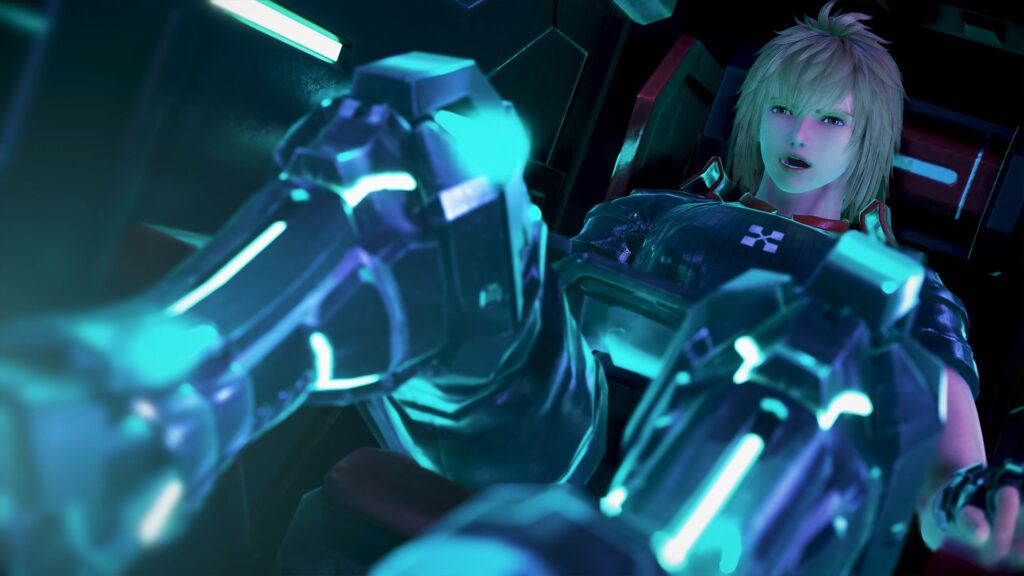 The story and plot in Star Ocean The Divine Force can be summed up like this; Star Trek in JRPG form or science fiction meets fantasy. The main protagonists, Raymond and Laeticia, are from an advanced world and are stuck on an underdeveloped planet (from where most of the supporting cast and characters are from). At the beginning of the game, you can choose between Raymond or Laeticia, but this only affects whose viewpoints the narrative will be from and certain events, as you’ll still be able to play as either character despite who you choose.

Just like Final Fantasy, Dragon Quest or Tales, Star Ocean The Divine Force features a standalone story, so you don’t need to play the other games, but veteran fans will be able to spot easter eggs and references.

I love the sci-fi trope of those from a more advanced society getting stuck on an undeveloped world and all the moral/ethical conundrums that come with it. However, most of Star Ocean: The Divine Force doesn’t really delve into all of that. Instead, it pretty much feels mostly like a conventional JRPG story with multiple kingdoms, empires, factions, and races.

Plus, for most of the game’s duration, you’ll be stuck on one planet (albeit with a variety of environments and locations), which disappointed me a bit. I was hoping for something along the lines of 2007’s Rogue Galaxy by Level-5, in which I was able to hop from planet to planet similar to something like the Ratchet & Clank franchise.

A franchise mechanic, Private Actions, returns in Star Ocean: The Divine Force. Consider it something similar to the skits in the Tales franchise. They’re optional and missable, and in the case of Star Ocean: The Divine Force, can actually affect the game’s ending, resulting in one of many endings. These interactions are often delightful, making the characters feel more alive and unique, which is appreciated. The second half of the game is even more Trek-ier than I thought it would be. 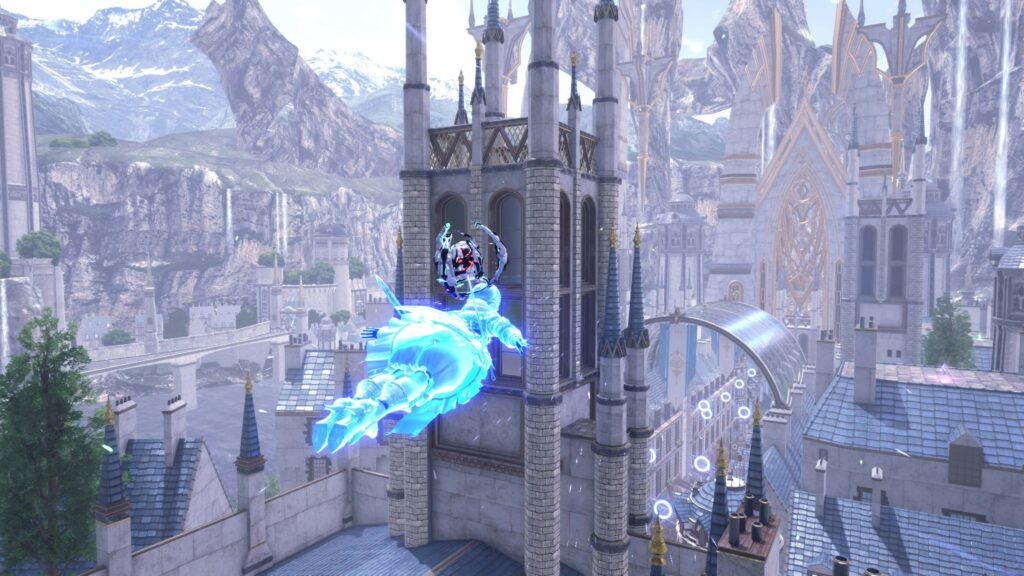 The best thing about Star Ocean: The Divine Force is the brand new D.U.M.A. mechanic. Combat and traversal feel great because of the D.U.M.A. mechanic, which you can use to sort of rush/fly forward for several seconds. It’s similar to how Sora can glide/fly in Kingdom Hearts 3, though the D.U.M.A. actually only allows short bursts at a single time.

I appreciate how after using the VA rush (what the action is called in the game) the character seamlessly slides and continues running when hitting the ground, which makes the movement feel a lot more fluid. All of this makes exploring the world actually sort of fun, especially since some chests and items are located on roofs of buildings and elevated platforms that require the use of the D.U.M.A.

The D.U.M.A. mechanic is also available for use in combat, especially when making surprise attacks on enemies, rush attacks, ultimate attacks, defensive abilities, and more.

The core combat in Star Ocean The Divine Force uses an AP (action point) system, which means that you can only attack until you run out of AP before having to wait and recover.

This makes the combat feel less spammy and button-mashy. Similar to the recent Tales Of Arise, you can map each attack or ability to the face buttons (square, triangle, circle), which means that there’s a high level of customization when it comes to your combat style and strategy. Gaining levels and EXP will net you SP, which you can use to unlock nodes on a skill tree that is sort of similar to something like the sphere grid from Final Fantasy X. These nodes not only increase specific stats, but also unlock new skills and abilities. 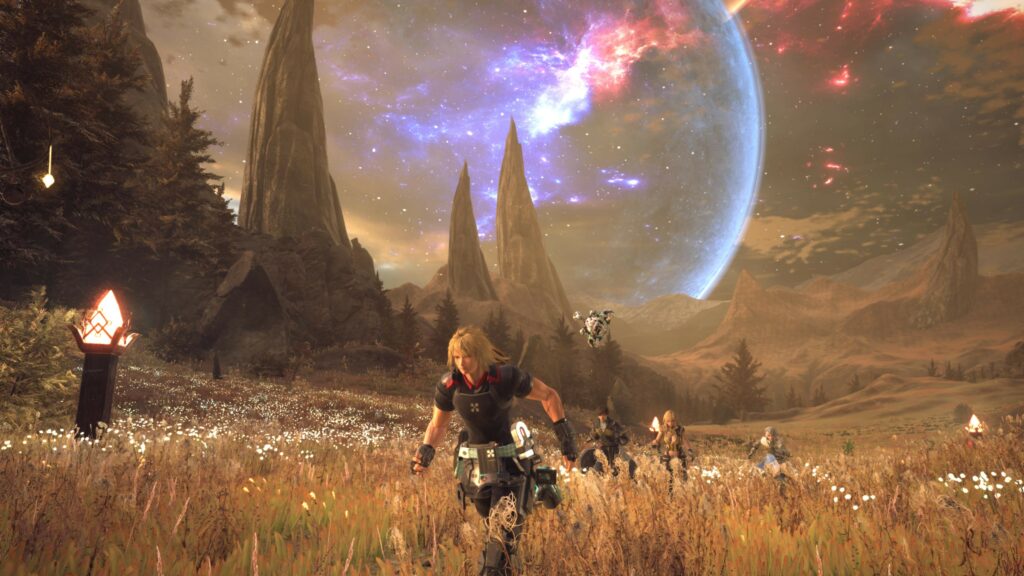 Outside of combat, there’s also a crafting mechanic, though you can pretty much ignore that if you’re not planning to grab all trophies or complete the game at 100 percent. There’s also a mini-game, where you can collect figures for use in a board game-like minigame. It’s actually pretty simple to understand and addictive once you get into it. Thankfully, it’s not just another card game.

Plus, you can equip your characters with these figures for some buffs. Weirdly though, there doesn’t seem to be a way to check which Es’owa players you’ve defeated, which is annoying considering how many there are in the towns and cities in the game.

Now, as for the major issues of the game: a large part of the game feels and looks unpolished, like the quest system. It’s hard to find or pinpoint side quests or even main quests. Plus, there’s no Legend for the map, so it’s frustrating to find what you’re looking for. It all feels really messy, especially compared to other recent JRPGs like Tales Of Arise, where it’s easier to keep track of stuff like side quests.

The graphics of the game looks okay for the most part, but the character models look a bit cheap; like creepy porcelain dolls with lifeless and expressionless eyes. Sure, not every game has to look like Final Fantasy or Kingdom Hearts, but look at Tales Of Arise and other recent JRPGs. 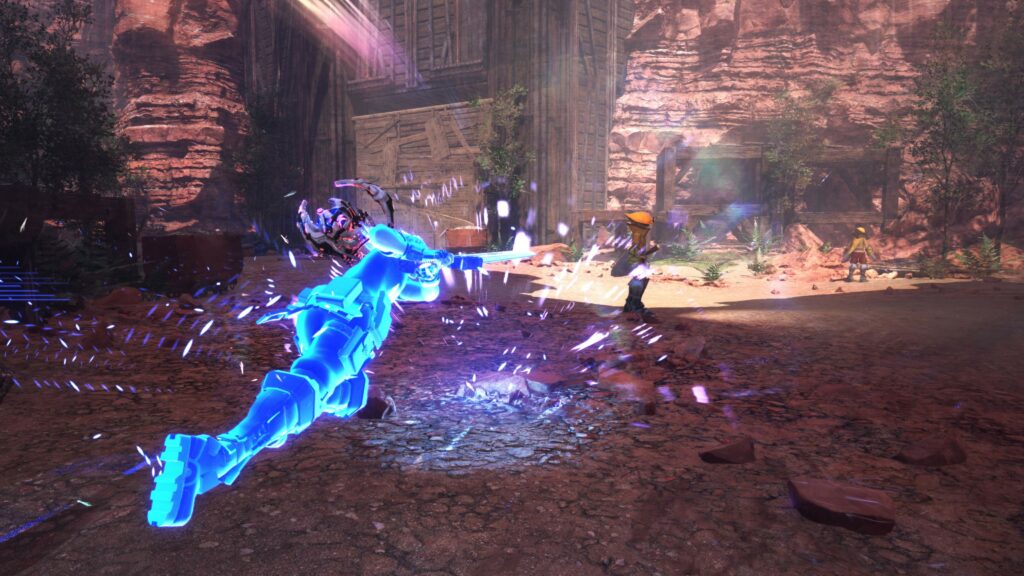 In addition, your party members keep getting added and removed so often that there’s no reason to really get attached. One minute this person is in your team, the next he or she or they are gone for some arbitrary story reason. Oh, and those party members get their accessories removed every single time that they’re gone from the team. Thankfully, all your party members level up regardless of whether you use them or not, which means that there’s less grinding and that their absence isn’t too much of an issue. Even on the PS5, the game also suffers from performance issues like framerate drops when in hectic combat or big cities.

Oh, and besides the great D.U.M.A. system, you can save at any time simply by going into the menu. When you load the game back up, you’re exactly right where you saved. This is an amazing accessibility feature and one that every JRPG should emulate. There’s really no reason for modern games to force players to only save at fixed checkpoints. 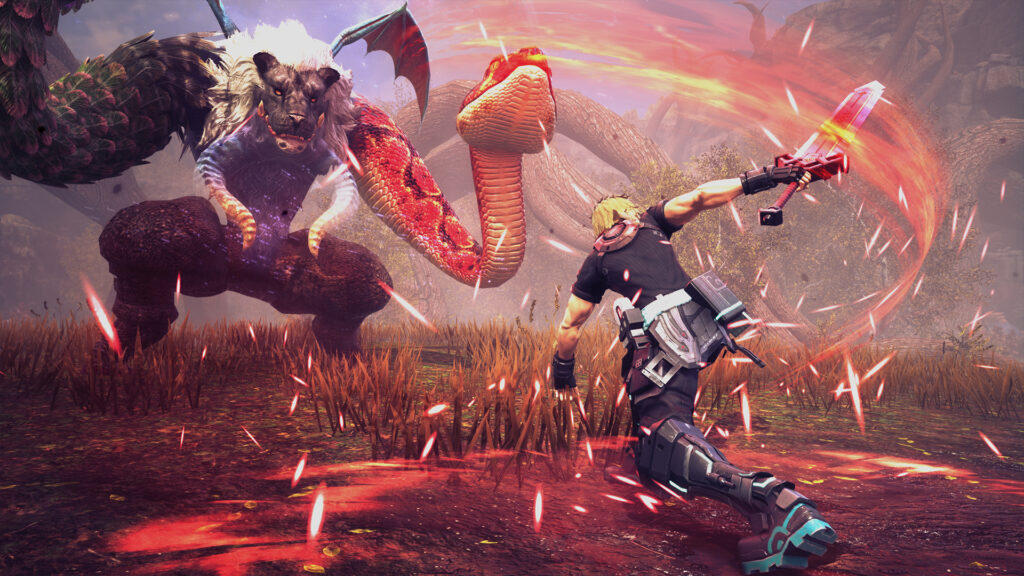 Overall, Star Ocean: The Divine Force isn’t a bad game at all. I enjoyed my time with it thanks mostly due to the D.U.M.A. mechanic. The experience of playing this game makes me reminiscent of my memories of playing PS2-era JRPGs. A lot of them weren’t polished or even that great, but I still had fun playing them. Star Ocean: The Divine Force is pretty much the same. It’s not that memorable, nor will it innovate the genre, but it’s still a decent game.

Star Ocean The Divine Force was reviewed on PS5 based on a review copy provided by Square Enix. It is out now on PS4, PS5, Xbox One, Xbox Series X/S and PC.

News
Watch Anamanaguchi Rock Hard In This Scott Pilgrim VS The World: The Game Live Concert

Scott Pilgrim VS The World: The Game was a fun beat-em-up back in 2010, and its Complete Edition that literally came out today is a nice trip back to ...

Gearbox Loot and Gearbox Software have announced the Akedo Tiny Tina's Wonderlands Black Signature Top shoes. It's priced at US$67.99, or roughly RM30...

After 20 years, Sakura Wars will be the first game in the franchise to receive a localized English version. The last Sakura Wars title was 2005's Saku...