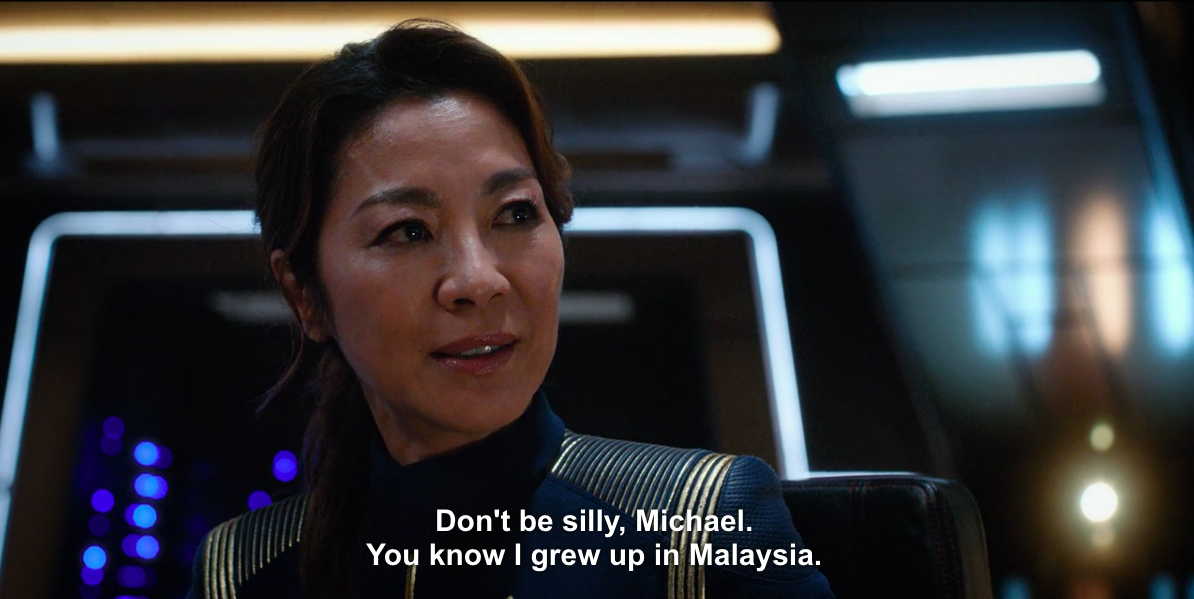 Malaysian Twitter has been buzzing with excitement and hype ever since the season 1 finale of Star Trek Discovery last Monday. For the first time ever established in the StarÂ Trek official canon, a Malaysian sits in the Captain’s chair. Portrayed by our very own Tan Sri Dato’ Seri Michelle Yeoh, Captain Philippa Georgiou was born in Malaysia on Earth.

In Season 1 Episode 15 “Will You Take My Hand?” of Star Trek Discovery, the character Emperor Philippa Georgiou from the Mirror Universe reveals that she grew up in Malaysia. She further mentions Pulau Langkawi (Langkawi Island) as her specific hometown. Surprisingly, this isn’t the first time or only time that Malaysia has been mentioned in the Star Trek franchise.

In the 2001-2005 series Star Trek: Enterprise, Lieutenant Malcolm Reed of the Starship Enterprise NX-01 mentions his parents living in Kota Bharu in the state of Kelantan, Malaysia. In the 1995-2001 series Star Trek Voyager, a character speaks of his cousin owning a beach house in Malaysia.

Some might not know that our countries, as we know it, exists in the Star Trek universe. Words like Starfleet and the Federation gets thrown around with little to no explanations of what they mean, especially in the recent Kelvin-timeline JJ Abrams movie reboots and Star Trek Discovery.

Let me give you a brief history of the Star Trek universe. It is still very much based on real-world history, up until the 1990s when every country on Earth fell into chaos in the aftermath of the Eugenics Wars and later World War 3 in the early 21st century, both of which obviously hasn’t happened in our world. Humanity was divided. Then the Vulcans came to Earth to establish First Contact with mankind when Zefram Cochrane created the first warp drive, which gave humans the technology to travel faster than light. This helped unite humanity into one planetary governmental state known as United Earth, where every nation in the world finally become one entity.

However, individual nations still retained their unique identities like culture. Examples include Malaysia, the United States of America and more. It plays a huge part in the development of characters’ identities. For example, CaptainÂ Picard from Star Trek The Next Generation grew up in a rural vineyard estate in France and Chakotay from Star Trek Voyager has episodes dedicated to exploring his Native American heritage.

That’s why, unlike the Star Wars universe where almost everything is fiction, Star Trek is actually based on the real world. George Roddenberry created it in the first place to portray the best of what humanity can achieve when they rise above petty differences of religion, skin color and personal wealth. In the Star Trek universe, there exists a better world where a Malaysian can be a Starfleet captain. I hope that world someday becomes reality.

Call The Witcher, A Monster Is Stalking Sunway Pyramid Mall

[…] very own Michelle Yeoh has been turning into a queen of sci-fi in the past few years, with roles as Philippa Georgiou in Star Trek Discovery and a cameo as Aleta Ogord at the end of Guardians of the Galaxy Vol. 2. Now she’s set to […]