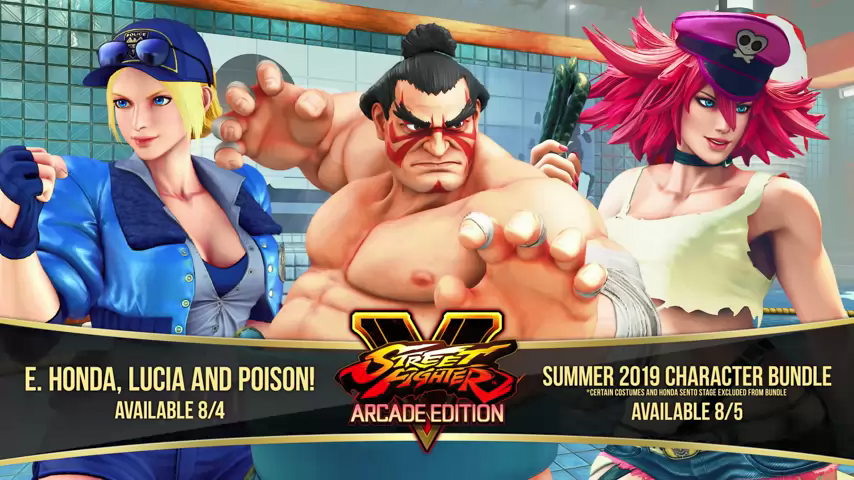 In the latest of Capcom’s many “leaks” ahead of their big reveal, the company’s marquee fighting title Street Fighter V will be getting new Season 4 characters. And they’ll be playable soon enough.

So Who The Heck Are These Guys & Gals Again?

Here’s how he plays in SFV (via Wario64). It’s frightening to see a heavy-hitter like him have juggles. His V-Trigger 1 lets him charge his sumo headbutt ala Abigail’s V-Trigger 2 juggernaut charge, which means unblockable/blockable shenanigans. His V-Trigger 2 pushes his opponent into the corner of the map if it connects, and gives his command grab more “oomph”.

Retro gamers should be familiar with Final Fight‘s Poison as one of the “female” enemies players beat up. She’s also the manager for Hugo as well as a fan-favourite for some, especially for those who play a ton of Street Fighter IV.

Here’s how she fights in SFV. She’s gonna be spacing and footsieing a lot of people out with her whip. Her V-Trigger 1 gives her command grab options, while her V-Trigger 2 molotov cocktails that deal damage-over-time effects. Dhalsim isn’t the only one with fire carpet moves now!

A Final Fight 3 character who favours hot pants and a leather jacket back in the 90s. Also known for doing a spin kick as a crowd control move just like most female fighters do at the time. And police batons; can’t forget about the batons.

She’s a detective for the Metro City Police Department and may be working closely with Mayor Cody in the SFV lore. She can now conjure fire from her feet and legs, as well as speak with a rather over-the-top Brooklyn accent. Her V-Trigger 1 makes her kicks have fiery juggling properties, while her V-Trigger 2 gives her a baton that can probably be cancelled from any of her moves.

Among all the three, I’ll probably play as Lucia first since her fire moves remind me of a certain King of Fighters character’s Eins Trigger. Guess I won’t have to wait too long. Also, it’ll be cool to speculate who the remaining two characters in Season 4 will be. Can we get a Rolento and a Sodom/Katana, or even a Maki, to round up the Final Fight-laden SFV season? Pretty please?