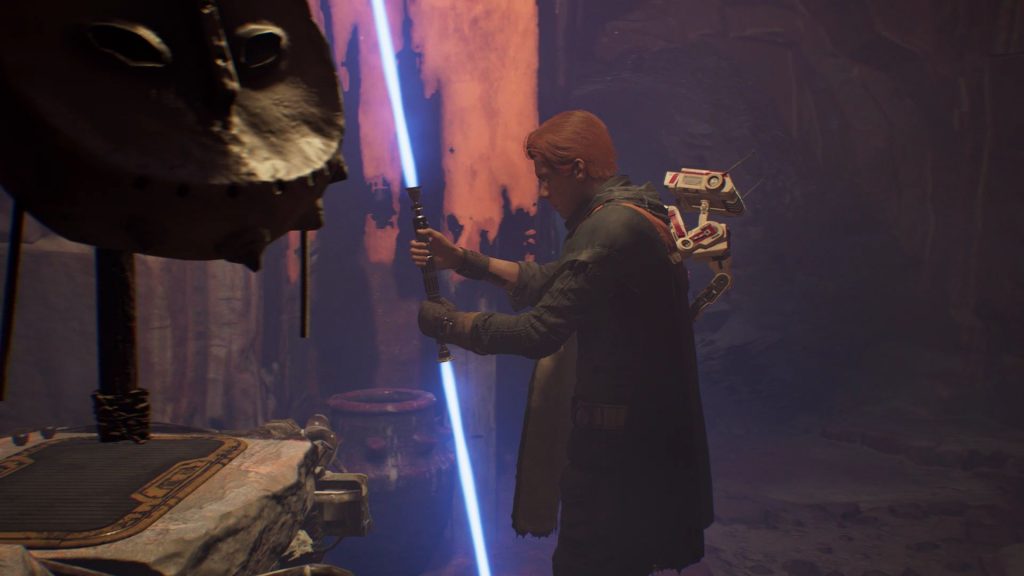 Did you know that you can find aÂ  double-bladed lightsaber in Star Wars Jedi: Fallen Order? Not only does it look cool, but it can also deflect more blaster fire, handle more enemies than usual, and open up a few more combat options.

To unlockÂ  it early, here’s what you need to do (via GamesRadar and Gosu Noob):

This one’s aÂ  given; you need to access new locations by completing Bogano campaign missions for the first time. Once you’ve done that, you will unlock two planets: Zeffo and Dathomir.

Zeffo is where you need to head to story-wise, which makes Dathomir a side option until later on. You can unlock the double-bladed Lightsaber on Zeffo but you’ll have to play through most of that planet to get to it. On Dathomir you can more or less nip out the ship, grab it and leave.

Flying to Dathomir is easy, but going through it underleveled is going to be aÂ  challenge. You can unlock the double-bladed Lightsaber with minimal enemy contactÂ but you will have to fight a few things along the way.

To get started head out of the ship and take the path to the right that leads down to a climbable wall. Head up and along to the right. A monster will look over as you go.

When you reach the top of the climbing wall make your way up the ledges on the right and look for an alcove you can wall run up to reach a higher level.

Head up and look for a climbable wall you want to go up. There’ll be some spiders here you can fight if you want, or just try and run past. At the top turn around to see a branch you can use to reach a wooden crane-like structure.

Head over the wooden branch and fight some spiders. You can cut the crane structure to release a shortcut down to the area you originally climbed up to. However, don’t do down. Instead keep going past until the path veers right. You’ll see a big doorway ahead of you which is where to go next.

Head in and you’ll trigger a cutscene that will introduce you to the locals – a Night Sister and her Night Brother warriors. You’ll need to defeat the last two once she’s gone to push on. Once you’ve killed them head out the back of the room and you’ll see two ropes to swing on ahead of a Meditation Spot.

Use the ropes to swing over and prepare to be attacked by a Night Brother and two archers. Kill them and head up the stairs. The door will be locked so go around to the right where one of the archers was and head through there where you’ll be ambushed by another Night Brother. After you defeat him, keep going andÂ anotherÂ Night Brother will jump out of the corridor you need to go down. Kill him and then defeat the archer around the corner.

There will be two more archers through the door on the left, on a ledge, so take care and be ready to parry as you go in. When they’ve eaten their own arrows wall run to the branch and use it to get to the archers level. Keep moving along the path and you’ll pass over the locked door which is now below you.

The path will take you back inside where you’ll be above a Night Brother and spider you can drop down on to attack. From here the passage will take you to the other side of the locked door which you unlock for a shortcut on the way back.

However, the main thing to look for is the ledge that looks over a bridge ahead with a cloaked figure on it.

If you drop down at this point and go left you’ll find a bench where you’ll unlock the Star Wars Jedi Fallen Order double-bladed lightsaber.

You can still get this nifty weapon on other planets too, but if you want it REALLY early, Dathomir’s your best bet.