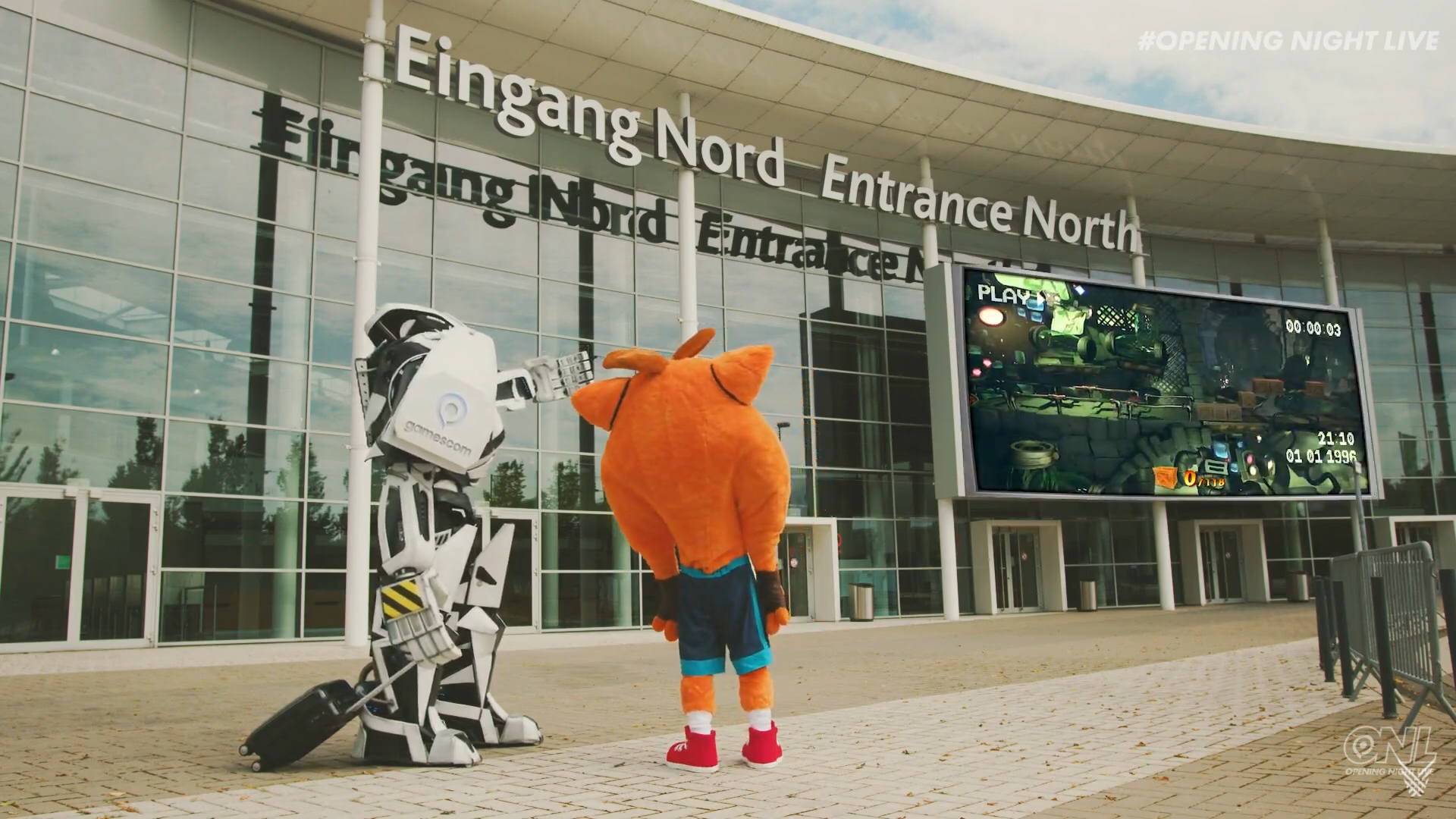 The presentation featured more than 30 games from over 18 publishers, including new game announcements but primarily focused on updates from announced titles.

Publisher Microsoft and developer Tantalus Media have announced that Age of Empires III: Definitive Edition will launch for PC via Steam and the Microsoft Store on 15 October 2020.

Call of Duty: Black Ops Cold War is slated to release for the PS4, Xbox One, and PC via Battle.net on 13 November 2020.

In Chorus, take control of ex-cultist Nara and her sentient starfighter Forsaken in an epic quest for redemption and to free the galaxy from the influence of the insidious Great Prophet.

This teaser trailer features previously unseen pre-alpha gameplay capture. Feel the agility and combat prowess of Nara and Forsaken and catch a glimpse of some of the devastating weapons and mind-bending abilities players will unlock in this evolution of the space-combat shooter.”

Here is an overview of Flasback levels, via Activision:

â€œFlashbackâ€ levels will give players the ability to rewind time back to the 90sâ€”the greatest era ever!

The Flashback levels are designed to challenge playersâ€™ puzzle solving and technical performing abilities. They also give fans even more ways to play. Through the collection of Flashback Tapes, players discover Crash and Cocoâ€™s origin story and experience Bandicoot training in Neo Cortexâ€™s Test Chambersâ€”but the task wonâ€™t be easy.

Crash Bandicoot 4: Itâ€™s About Time is slated to release for the PS4 and Xbox One on 2 October 2020.

Power takes a new form and three new subclasses emerge: Shadebinders, Revenants, and Behemoths. Guardians will wield Stasis as they begin a perilous journey. A journey to a new destination in search of a dark empire and secrets frozen in time. Secrets that will reveal a power beyond understanding â€“ beyond Light.

Destiny 2: Beyond LightÂ is now available for pre-order on the PS4, Xbox One, PC via Steam, and Stadia.Â Destiny 2Â will also be coming to both the PS5 and Xbox Series X.

Design your dream racing event and tear up incredible user-created arenas in Playgrounds, the brand new mode for DIRT 5.

From custom gymkhana arenas, to bespoke time trial races, to thrilling treasure hunt events, use a huge suite of objects â€“ from drift zones and jumps, to rings of fire and loop-de-loops â€“ to invent unbelievable and unique Playgrounds.

Playgrounds is included in all versions of DIRT 5, and the published creations of players on current-gen consoles will be carried over when you switch to next-gen consoles!

DIRT 5 launches on 16 October 2020 for PC, Xbox One and PS4, followed later this year by next-gen consoles. Players on current-gen consoles are entitled to a FREE upgrade to the Xbox Series X or PlayStation 5 version, which include 120 FPS modes.

Pre-order DIRT 5 Amplified Edition for three days early access, exclusive cars and the keys to every single post-launch addition to the game!

Watch the full trailer for DOOM Eternalâ€™s first campaign expansion, The Ancient Gods: Part One, which will be available on 20 October 2020.

Your war is not overâ€¦ slaying the Khan Maykr left an imbalance of power that threatens all of creation. With the aid of an old ally, battle your way back to Urdak and decide the fate of the cosmos. Your mission is now your own.

The video provides a glimpse at new environments and characters as the team discusses how they are approaching the development of the upcoming fantasy RPG.

The new Dragon Age game was first announced in December 2018.

Publisher Devolver Digital and developer Mediatonic have announced that Season 2 of Fall Guys: Ultimate Knockout will launch in October 2020.

Fall Guys: Ultimate Knockout is available now for PS4 and PC via Steam. The PS4 version is free for PlayStation Plus members to claim throughout August.

Jurassic World Evolution: Complete Edition is available to pre-purchase from the Nintendo eShop now, and will launch 3 November 2020.

Publisher Warner Bros. Interactive Entertainment and developer Travellerâ€™s Tales have delayed LEGO Star Wars: The Skywalker Saga from its previously planned 2020 release window, as well as confirmed the game for the PS5 and Xbox Series X in addition to its previously-announced Ps4, Xbox One, Switch, and PC (Steam) versions.

It is now slated to release sometime in Spring 2021.

Little Nightmares II is a suspense-adventure game in which you play as Mono, a young boy trapped in a world that has been distorted by the humming transmission of a distant tower. With Six, the girl in a yellow raincoat, as his guide, Mono sets out to discover the dark secrets of The Signal Tower and save Six from her terrible fate; but their journey will not be straightforward as Mono and Six will face a gallery of new threats from the terrible residents of this world.

Publisher 2K Games and developer Hangar 13 have released the â€œA Life of Reward Too Big to Ignoreâ€ trailer for Mafia: Definitive Edition.

Mafia: Definitive Edition is slated to release for the PS4, Xbox One, PC via Steam and the Epic Games Store, and Stadia on 25 September 2020.

Medal of Honor: Above And Beyond

Override 2 installs massive upgrades that bring the seriesâ€™ balance of accessible design and deeply rewarding combat to the next level. This includes a brand-new career mode that lets players fight for the reputation of their club as they pummel their way to the top of Mech Leagues packed with formidable rivals.

Rain destruction on your opponents with a 20-bot roster brimming with charming personality across diverse arenas with game-changing hazards. Play new and returning game modes like Versus, Xenoswarm, King of the Hill, and more.

Outriders is slated to release for the PS4, Xbox One, PS5, Xbox Series X, and PC sometime in Holiday 2020.

Quantum Error is a cosmic-horror FPS video game currently in development coming to the PS5 and PS4 by TeamKill Media.

Ratchet and Clank find themselves at odds with their archnemesis, Dr. Nefarious. Only this time, heâ€™s equipped with the dangerous Dimensionator, a device with the power to travel to other dimensions. The duo fights their way through an army of hired Goons in Megalopolis until something happens and they are ripped apart. Where are they now?

From acclaimed studio Insomniac Games, Ratchet & Clank: Rift Apart will release exclusively for the PS5 during its “launch window”. It is a sequel to 2013’s Ratchet & Clank: Into The Nexus.

The OSF members are showing off their moves in the new Scarlet Nexus trailer. Scarlet Nexus is slated to release for the PS4, PS5, Xbox One, Xbox Series X, and PC, but an official release date or window for the game has yet to be revealed.

The Sam & Max franchise is getting a new game.

Sam & Max are a pair of crime-fighting animals introduced via comic strips in the 1980s before becoming actual comic books with 1987â€™s Sam & Max: Freelance Police. They went mainstream in the early 1990s with the first SCUMM-powered adventure game, Sam & Max Hit the Road, which is also available on Steam.

Little is known about the new Sam & Max game, but Gamescom Opening Night host Geoff Keighley confirmed that it will be a VR title.

Spellbreak is a multiplayer action-spellcasting game where you unleash your inner battlemage. Master elemental magic to fit your playstyle and cast powerful spell combinations to dominate other players across the Hollow Lands.

Access your Spellbreak player account and play with anyone on all supported platforms with cross-progression, cross-play, and cross-party features at launch.

Though shattered after the Battle of Endor, the Galactic Empire closes in on the Bormea Sector, determined to crush the recently-formed New Republic. The Republicâ€™s classified Project Starhawk represents a tipping point in the Galactic Civil War, and ace pilots on each side will be instrumental in its outcome.

Get a first look at an early Imperial mission in the single-player story of Star Wars Squadrons, where you must fly behind enemy lines to extract an allied spy with vital intelligence on the project.

Star Wars Squadrons is slated to release on 2 October 2020 for the PS4, Xbox One, PC on EA.com, Steam, and Epic Games Store, and PC with cross-play support.

Struggling is a physics-based co-op platformer with a twisted spin on teamwork. Control the arms of a squishy abomination and lead it through a deranged world.

It’s out now for the Nintendo Switch and PC.

Surgeon Simulator 2 is out now on PC via Epic Games Store.

Prepare the perfect heist in this simulated and fully destructible voxel world. Tear down walls with vehicles or explosives to create shortcuts. Stack objects to reach higher. Use the environment to your advantage in the most creative way you can think of.

Here is an overview of each collection:

In Little Hope, your choices could be the difference between life and death. Test your skills and try to find the best path through this interactive experience.

Publisher Annapurna Interactive and developer Luis Antonio have announced that interactive thriller 12 Minutes will launch for Xbox Series X in addition to Xbox One and PC.

The 12 Minutes ensemble cast will include:

Directed by Luis Antonio and written by Steve Lerner and Luis Antonio, 12 Minutes invites players to solve a mystery of a man stuck in a time loop.

In this interactive thriller, a manâ€™s romantic evening with his wife is interrupted by a violent home invasion. The man tries to stop the attacker and gets knocked out only to immediately find himself back to the start of the evening, stuck in a time loop of 12 minutes. He must use the knowledge of what is about to happen to change the outcome and break the loop.

12 Minutes is a fresh take on the thriller genre, where players are asked to take part in a compelling story centered around a shocking crime which they must help solve. The game subverts the ideas of what play should feel like and will present players with a truly unique experience.

Liberty, who runs Colorado with an iron fist, tells Rangers to “Go back to Arizona” in this new trailer for Wasteland 3.

Gasket Games and Focus Home have revealed Warhammer Age of Sigmar: Storm Ground, a new strategy game set in the fantasy world of Warhammer: Age of Sigmar. The game will feature the Stormcast Eternals as its heroic faction, facing off against Nagash’s undead Nighthaunt.

Uther the Lightbringer, Paladin of the Silver Hand, met an untimely demise â€¦ but his service is not done. When he passes into the afterlife, Devos â€“ a Paragon of Bastion â€“ takes Uther under her wing, only to learn that some mortal wounds run deeper than she could imagine.

Beyond Azerothâ€™s shattered sky, a realm of infinite afterlives awaits: the Shadowlands, where mortal souls go to reckon with their pasts, discover new purpose . . . or suffer an eternity of torment. Seize your destiny on 27 October 2020.

The legendary Paul Heyman reads you a story about all the ways you can Brawl Without Limits in WWE 2K Battlegroundâ€™s many wild and unpredictable game modes including:

Raised on the streets of Kolkata India and haunted by visions of her own death, Haroona struggles to understand her mysterious innate abilities to manipulate the unseen. A mentor soon helps Haroona hone her gifts, teaches her to access the mysterious hidden dimension known as The Fold and propels her on a journey to unlock the mysteries of this new realm.

Unknown9 is slated to release for the PC, PS5, and Xbox Series X,

You can watch the entire two-hour Gamescom Opening Night Live 2020 below: