When you think sci-fi epics, you think of the names Frank Herbert, Isaac Asimov, Ray Bradbury, Robert A. Heinlein, Orson Scott Card, and a few others. There are a good number of talented authors who set the standard and template of the genre, that there is truly no wrong answer. Unless you go to an online forum or want to start a fight on Reddit.

As it stands, you can now add George Kamitani to that prestigious list. I can safely say that his latest writing and game directing work, 13 Sentinels: Aegis Rim, is truly a pinnacle work of science fiction that is of Iliad status. 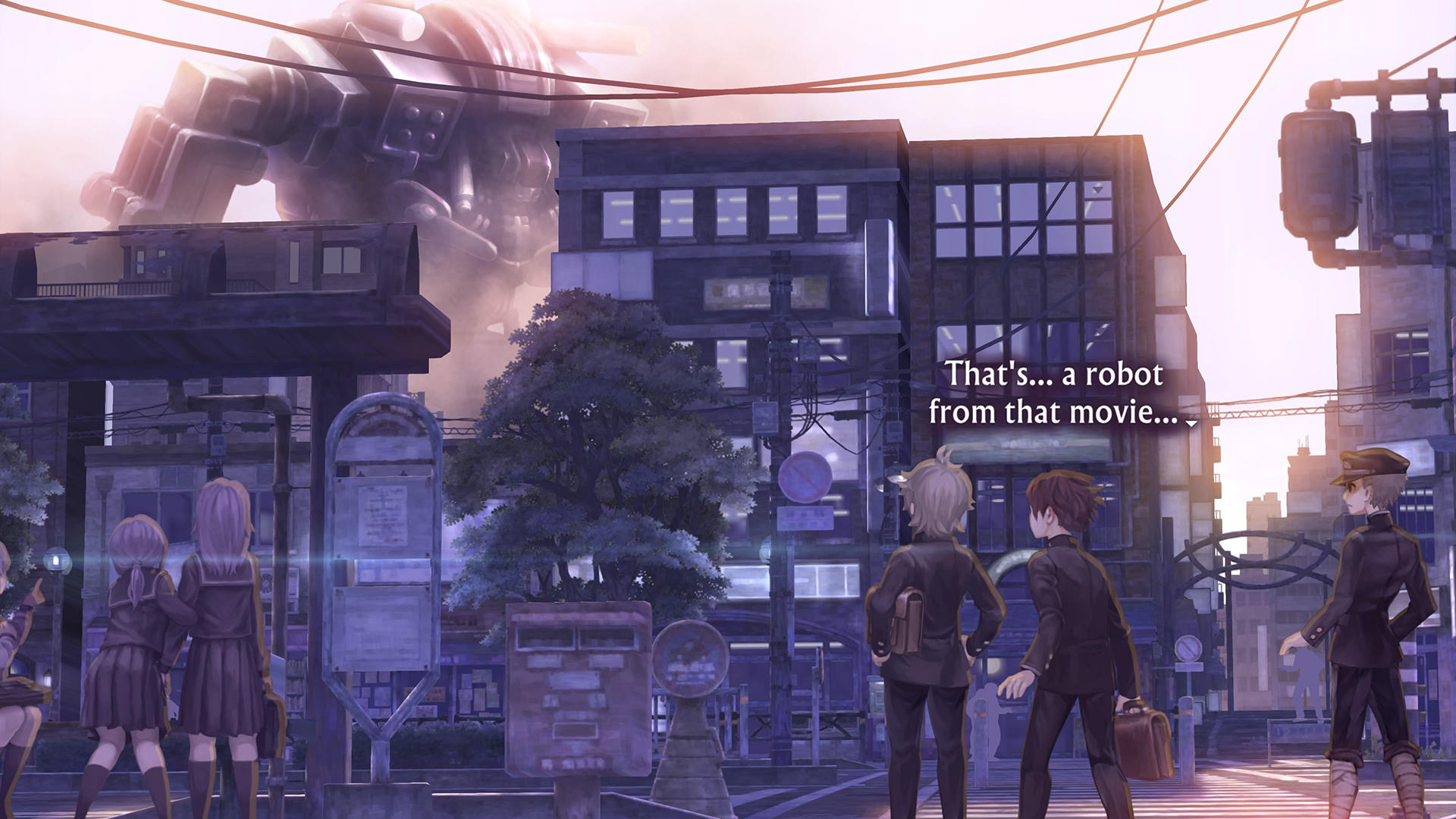 The beauty of 13 Sentinels: Aegis Rim, a PS4 exclusive title published by Atlus, is not just its outstanding visuals and dinstinctive art style. Neither is it just its lovingly-composed Basiscape orchestra-slash-electronica hybrid soundtrack. Though with these elements alone, 13 Sentinels is gorgeous in motion and in static form. What sets this game apart is that it unabashedly cherishes its linearity and visual novel adventure game format. It wears it loud and proud, yet at the same time reveals its innermost secrets and plot twists in a methodical structure. And from that method of game-creating, George Kamitani and the Vanillaware team has crafted what essentially is the equivalent of the Foundation, Hyperion, and the Ender series, but in a digestible video game form.

How does 13 Sentinels play? Well, you start off with a cutscene that sets the stage, then play through the scenario of one of its 13 protagonists (kaiju otaku Juro Kurabe in this case), and then get a sample of the real-time strategy section which we’ll hit on later. The story starts off simple: set in the 1980s, it’s humanity’s last stand and a bunch of teenagers, from a bespectacled waifu archetype to a tough guy with a heart of gold archetype, are tasked with piloting mechas called Sentinels to defend their home from giant mechanical beasts called kaijus. It’s when the narrative starts unfolding itself bit by bit, via the extensive prologue and the perspectives of the 13 heroes, that makes 13 Sentinels stand apart from the rest.

True, you will find a lot of anime, sci-fi, and anime sci-fi tropes and inspirations from the aforementioned sci-fi authors and other older shows. Raven-haired bespectacled girls, lovesick supporting characters, budding romances between a prettyboy and a tough girl, amnesiac heroes; you know the drill. However, all of that is blended, told, and presented in the best way possible. When you play through 13 Sentinels, the game is told in media res, and it’s up to you to unlock every story and plot point and then watch it in the correct order to piece it all out. Every revelation and story swerve in 13 Sentinels will keep you invested and excited as you turn the proverbial page to find out more and how it all led to the aforementioned last stand.

You’ll be questioning everything that’s going on within the game and its 13 main characters. Why is a cat telling said bespectacled girl to shoot random folks? What’s up with Juro and his buddy Shiba? Why is Iori Fuyusaka always sleepy? All this and more gets revealed to uncover the overarching epic sci-fi plot.

The game’s flowchart system and archiving make it easy for you to backtrack and rewatch key scenes to make sense of its complex narrative. During each visual novel adventure scenario, you have to unlock keywords and activate dialogue options, sometimes in timed sequences where you can die if you don’t act quick. This, along with the gaming bits, will take you about 30+ hours, and it’s well-spent. I won’t spoil anything about 13 Sentinels at all; apart from the fight you see in the first 10 minutes, everything will make sense in the end.

So where does the challenge and gameplay of 13 Sentinels come in? Enter the real-time strategy portion where you control six of the 13 sentinels in a tower defense setting. You have to protect your Aegis tower from invading kaijus who come in all shapes and sizes. Fights are done in real-time, but when it comes to your sentinel’s turn, time stops and you can take your sweet time either selecting your many attacks, repairing, or defending to charge up spent EP points. You need EP to pull off your more powerful Sentinel attacks like an armour-piercing mecha Jojo reference punch barrage, or a rail gun blast, or a Macross-style game-changing missile salvo. Your Sentinels also come in classes, ranging from melee Generation 1 mechas to support-savvy Generation 4 bots.

All the fights aren’t presented in Vanillaware’s illustration, however. They’re all pulled off using Wargames-like wireframes. 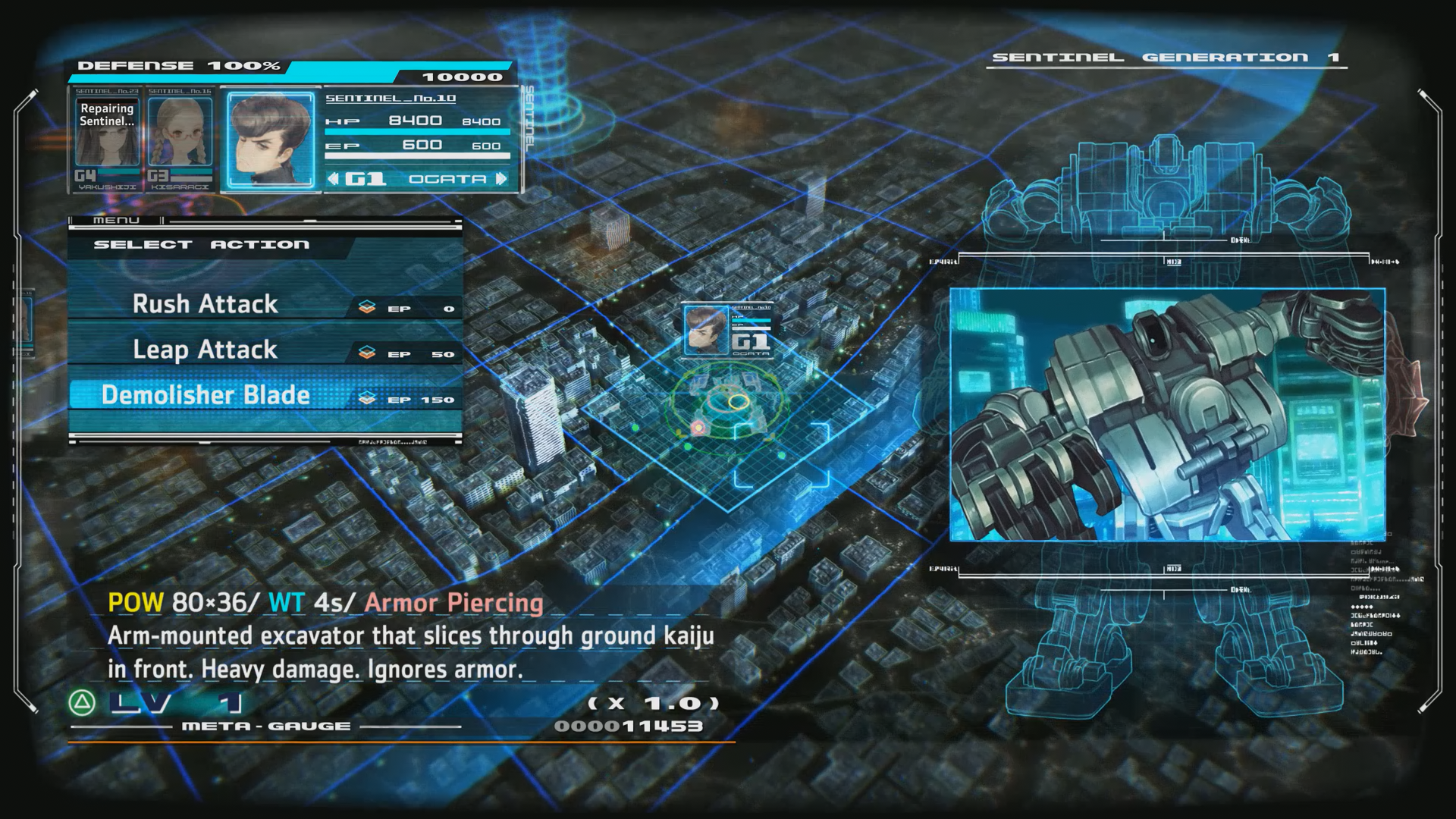 You still get each character’s portrait popping up during dialogue bits, but all fights will look like an elaborate isometric version of Robotron and Geometry Wars. Granted, it looks nice, but it does come with slowdown when the screen gets overloaded with kaijus and you are sometimes left with that feeling that Vanillaware could have done some sort of Advance Wars-style combat transition to showcase the impact of each hit and attack better. Still, it looks decent.

Pity it isn’t that challenging, because the objectives are largely similar, and you can get away with the same defensive tactics. Like overequipping your Gen 4 with armour-piercing interceptors, or just having your Gen 1 Sentinels go up close and punch the big kaijus to death. If they’re in the air, any one of your Sentinels can use their many anti-air options to ground them permanently. Or setting up turrets with your Gen 2 Sentinels. And you can call in special Aegis Tower powers that affect either all your enemies or buff up all your squad. While limited, these can turn the already-in-your-favour tide of battle into a walk in a park. True, you can up the challenge with Intense difficulty, but that just means you’ll take longer just to be careful and position yourself better. The same turret strategy still works.

That doesn’t get in the way of the 13 Sentinels interactive fiction experience, because its maudlin RTS gameplay isn’t the highlight. Rather, it’s the epic sci-fi story that will make Vanillaware’s latest the talk of the town, be it in JP dub or English dub (which is done very well). It might be a tad expensive for what amounts to be a high production value visual novel, but its breadth, its gameplay, its structure, and its payoff is definitely worth it. Throw your prejudices out the window; you haven’t experienced a story of this magnitude and quality not just in a video game, but in the sci-fi genre as a whole.

13 Sentinels, and Vanillaware as a whole, are video game cultural treasures, no buts and ifs about it.

Halloween is upon us and there's no better way to celebrate it than to talk about our favourite hair-raising moment in video games. Be it horror games...

To be the hunter or the prey; the choice is yours when Predator: Hunting Grounds' Trial Weekend kicks off from March 27 to March 29, this Friday at 2p...

Radi Art and Top Hat Studios have announced that Synergia, their acclaimed cyberpunk-themed visual novel, is finally coming to PS4 on 18 March 2021. I...