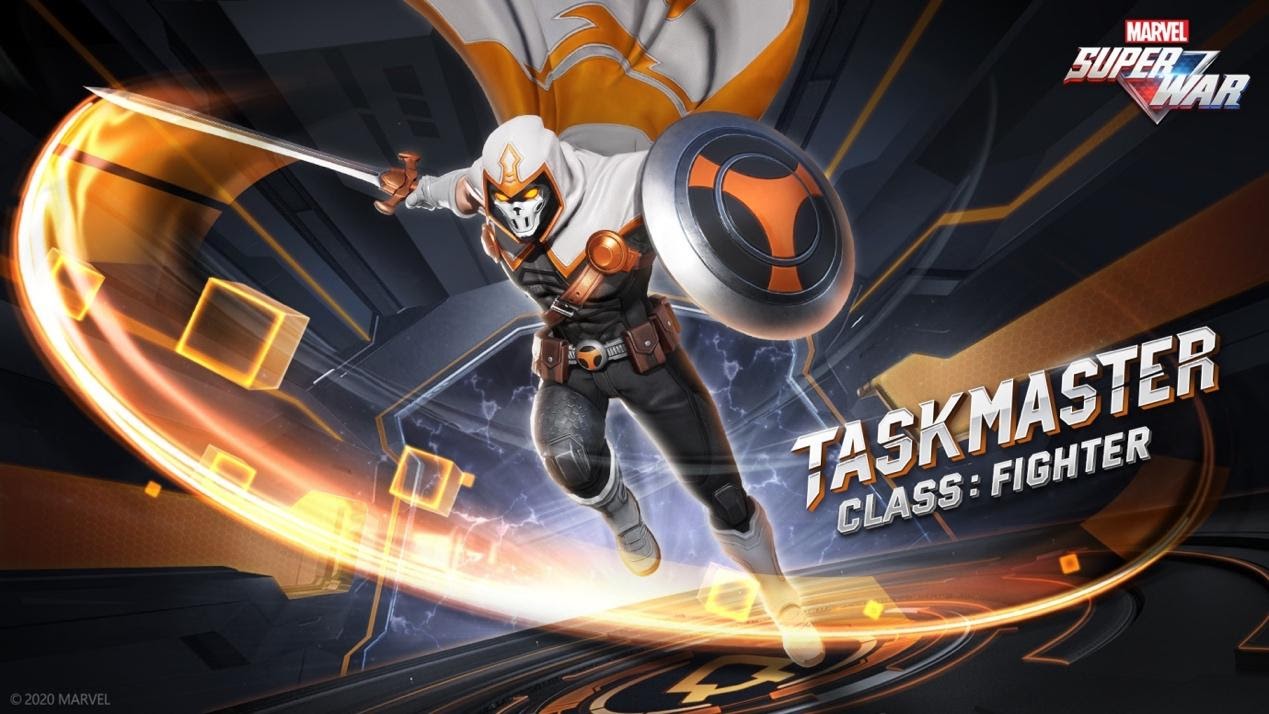 Taskmaster is a skilled tactician and an adept martial artist. Thanks to his photographic reflexes, he is able to replicate the physical movements of anyone he witnesses.

He is also set to be featured in the upcoming Marvel Studios’ movie Black Widow (which has since been delayed to 2021) as an antagonist. However, in the comics, he’s always been a villain of the entire Avengers team.

Taskmaster is a powerful fighter with the ability to switch between two forms, enabling him to harass and deal damage from a distance in Bow and Arrow form or charge into melee and finish off enemies in Sword and Shield form.

Each of Taskmaster’s forms holds a different set of skills.

Ability 2 – Deadly Charge: Press and hold the ability to charge, which causes Taskmaster to accelerate and deal damage to enemies in his path while knocking them back. At the end of the charge, he slashes in front of him, dealing AoE damage and launching enemies up. Drag the ability joystick to “Reflex Kick” during the initial charge to perform a combo.

Ability 3 – Marksman Mimic: Taskmaster switches to his Bow and Arrow form and blinks in the direction of the joystick.

Ability 1 – Photographic Rapid Fire: Taskmaster shoots arrows in the specified direction, dealing AoE damage and triggering a combo. When the combo is triggered, Taskmaster rolls forward and shoots a powerful arrow at the enemy with the most marks while dealing damage and inflicting slow on enemies near the target.

Ability 2 – Arrow Assault: Press and hold the ability to charge, which causes Taskmaster to accelerate. He also automatically marks and uses 1 basic attack on targets in range every 0.5 seconds. While charging, drag the ability joystick to “Photographic Rapid Fire” to perform a combo.

Ability 3 – Shield Throw Mimic: Taskmaster switches to his Sword and Shield form and slashes in all directions, dealing AoE damage.

How To Play As Taskmaster

The key to using Taskmaster effectively lies in the versatile use of his combo. Ability 2 gives the option of casting the Ability in a combo with Ability 1 or on its own, and if a combo of Ability 1 and 2 is performed, it will only count toward a CD for Ability 2, and Ability 1 can be cast again right after the combo.

Since Taskmaster has two forms at his disposal, he can switch forms after the initial assault to further damage the target.

Initiate contact in Bow and Arrow form. Use Ability 1 to harass the target and Ability 2 to charge and add marks. After stacking 3 marks, drag the joystick to Ability 1 to perform a combo. Switch to Sword and Shield form and perform a charge with Ability 2.

When coming close to the target, drag the joystick onto Ability 1 to perform a combo and finish off the enemy with another Ability 1 cast on its own. Basic attacks can be used in-between skills to deal additional damage.

Marvel Super War is available on Google Play Store. In the meantime, check out the trailer below:

Genshin Impact Players Go On A Review-Bombing Spree; Here's Why

Psychonauts 2 Is Almost Finished, Slated For 2021