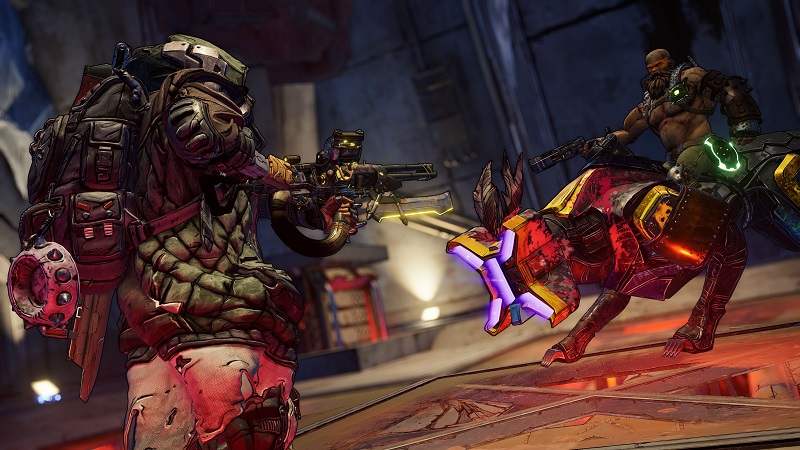 Want to bring back the feeling of being level 1 but keeping your progress and your level 65 character? Then Borderlands 3’s Designer’s Cut’s Arms Race mode is for you. However, this is assuming you already have friends playing Borderlands 3 with you since September 2019. Or earlier this year if you jumped on the Steam version.

A Battle Of Royale Proportions?

Just a quick breakdown of Arms Race: you and three others are dropped on a Dahl military base, empty-handed. Your goal? To get weapons and loot you can extract, as well as survive and kill the level’s boss, Heavyweight Harker. Since you’re unarmed, you have to find the nearest chest to get whatever weapons you can to survive. You’ll find special loot boxes that will give you either blue or purple loot to survive, or legendary loot that you can extract out of the field via special extraction stations. You can’t use these special legendaries that’s exclusive to this mode though, but there are some existing legendaries you can use during Arms Race.

You also can’t stay on the map for too long because there’s a Murdercane (murder + hurricane) that will damage anything outside of the designated safe zone. The Murdercane also moves and stops at will, which means you can either run back to safe zones if you missed them, or head out to previously-unsafe loot box zones to possibly score more legendaries.Â Throw in commentary from Borderlands 2’s Axton and Salvador and you have a rip-roaring time that will test your skills and endurance.

In short, it’s a battle royale-style shooter but it’s PvE, not PvP. It’s your group against the multiple enemies ranging from Maliwan troops to COV Psychos, with the occasional skag and spider-ant thrown in for good measure.

Honestly, I do like having a roguelike start-from-the-bottom nature of this game mode. It makes me prioritize certain blues and purples, heck even greens, depending on my playstyle and what kind of firearms I get. I cannot stress enough that you need friends to play through this mode and get the most out of it. Having someone watching your back and helping you out is better than soloing this. Plus, the increased loot drop rate with more people on-board helps.

Of course, the big reason to get the DLC is for the new skill trees for each Vault Hunter. Moze summons an Iron Cub and gets more Incendiary bonuses & status chance buffs. Zane has a MNTS shoulder cannon, gets critical boosts & penetration bonuses, and can now utilize Action Skill End buffs.

Fl4k has a gravity trap that launches & stuns enemies, as well as some much-needed survivability options and defenses. Amara summons a Phaseflare which is a volleyball that damages anything near it, as well as gets stronger the more you melee it. She also gains access to Cryo as an additional element and gets melee bonuses and even the ability to ignore enemy elemental defenses for a few seconds when attacking.

Truth be told, paying US$15 for a new mode and new skill trees might not seem like much to new players, but it’s a boon and a great way to expand a Borderlands 3 player’s repertoire further. Newbies should focus more on Season 1’s content before making the jump to Season 2 for now; it’s not exactly cheap at this point in time.

But for existing players looking to branch out and test their mettle while appreciating greens, blues, and purples again? Get your sprinting shoes on for this Arms Race. Just make sure you’re not alone in this one.