Per Aspera Review: Life On Mars?

Review by Frags of War.

Per Aspera is unlike any other strategy game Iâ€™ve ever played (except just one, which Iâ€™ll get into a little later). It has elements that seem familiar, but what the devs, Tion Industries, have done is to put them all up together into one very interesting package.

What is Per Aspera?

Imagine a city builder at the scale of a planet. In Per Aspera, humanity attempts to colonize Mars (not for the first time). This time, with the help of Artificial Intelligence.

You are tasked with making Mars ready for human colonies. From extracting important resources to making the environment livable, you as an AI sent first to Mars before the humans will have to do it all. 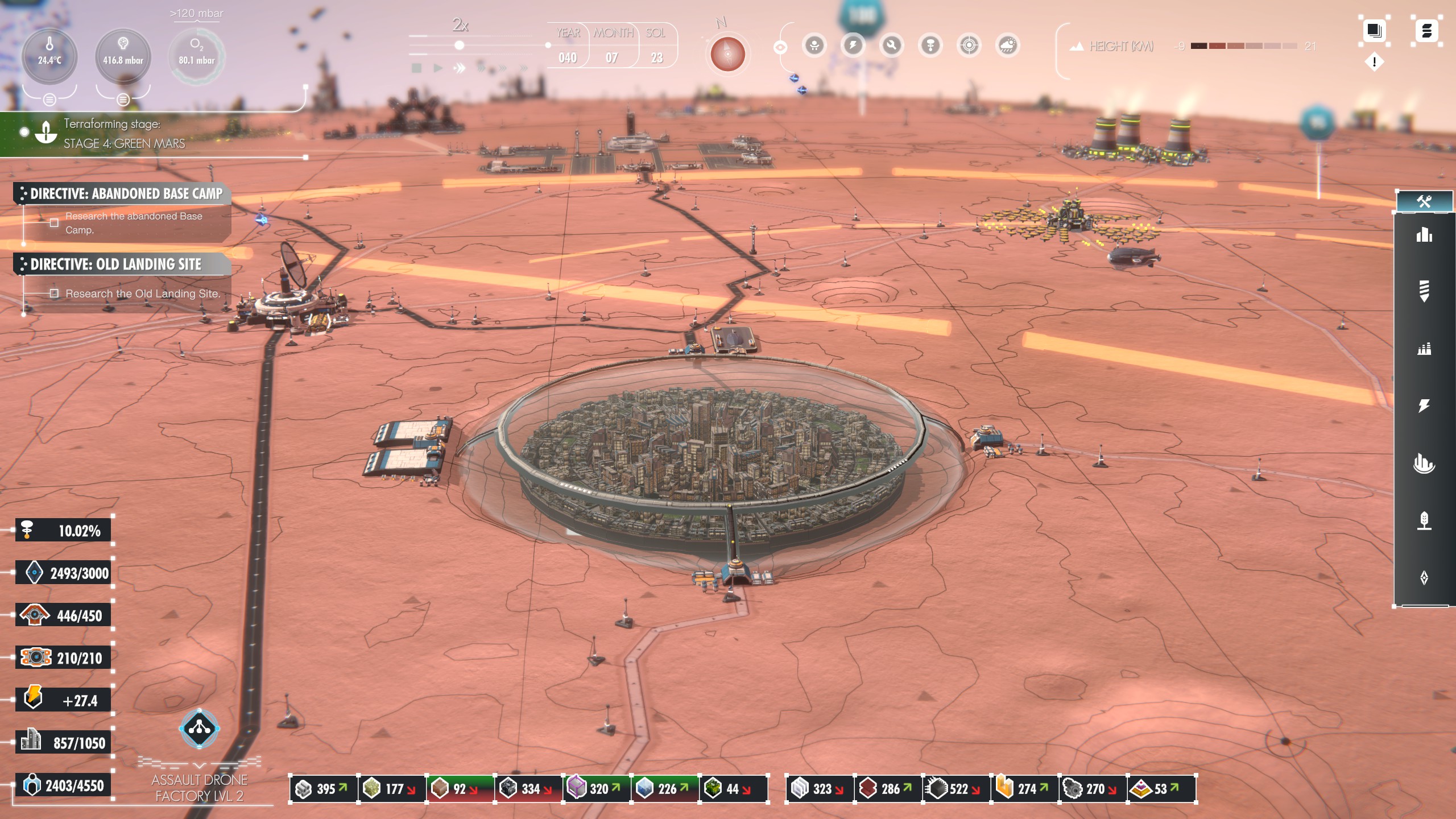 While Per Aspera apes the likes of a large city builder as you build structure and colonies, itâ€™s really a game about production chains.

Yeap… itâ€™s one of those games where before you build that factory, so you got to get one of these and another one of those before building it.

Where it differs from lots of other production chain games, is that Per Aspera is more of a macro-focused game. You do eventually need to build on almost the entire martian surface over time. Youâ€™ll build hundreds of buildings.

When youâ€™re busy looking at things from above from the view of an entire planet (and thatâ€™s quite literally what you do actually), thereâ€™s no time to dabble in the minutiae of tiny details.

This the game does rather well. When you plop down a structure, roads get built automatically. The workers (robots that carry resources around) also work autonomously. They collect resources and drop them off in the most needed buildings or based on priorities you can set.

All youâ€™ve got to think about is whether youâ€™ve got enough power, whether your maintenance facilities cover all buildings (buildings deteriorate over time, so theyâ€™ll need to be maintained), are your autonomous workers being overloaded with too many thinkings to do, and which direction do you want to expand to.

If thereâ€™s one thing I wished for, was that it made it easier to figure out all the other buildings needed before you built something. For now, when you need to build something, youâ€™ve got to look at the resources required for the buildingâ€™s input, then manually find which building produces that resource. Itâ€™s not a big deal, but a small inconvenience.

Optimizing your chain of buildings lies entirely on improving your workerâ€™s efficiency. The number of roads in a workerâ€™s sector and the distance between buildings all impact how efficiently the workers do their job.

Even here, you donâ€™t necessarily need to get into the details. Per Asperaâ€™s different overlay toggles give you the most important information you need to optimize and plan your expansion.

In the case of your workers, just look at the traffic in each sector. If itâ€™s more reddish in colour, then itâ€™s not operating as efficiently as it could. Just pop down another worker hub and youâ€™ll improve things already.

Things go relatively smoothly in Per Aspera in the early game. That is until the game decides to throw you a curveball in its story with scripted events.

Read the rest of the review here.Â

Reviews
The Classic 2002 Mafia Gets The Remastering It Deserves