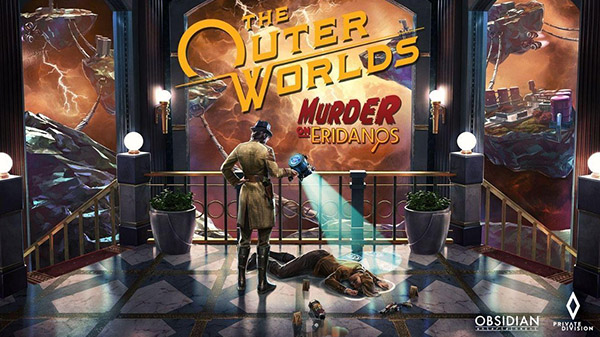 The second half of The Outer Worlds’ season pass (and the next game’s DLC) is arriving this month, with developer Obsidian reminding us about it with a teaser trailer.

The second DLC will be called Murder on Eridanos. Basically, the protagonist’s ship The Unreliable lands on a floating platform after we’re given an overview of the defunct industrial zone; we’re guessing that’s the planet Eridanos.

The Board is pleased to announce that your new job duties are almost ready, spacer. Stand by for more information arriving tomorrow regarding your upcoming assignments. pic.twitter.com/SFlax5HXdk

After that, this tweet popped up; it’s a picture of a Willy Wonka-like golden ticket to give us access to Rizzo’s, the in-game corporation that make all their food products from a fruit called “purpleberry”.

Oh dear, there seems to be a smudge on your Golden Ticket. This will not do, spacer. Let us find someone to clean that up for you while you go enjoy a glass of Purpleberry Fizzy Tea, on us. pic.twitter.com/u9S1MAA4EA

The DLC will feature a murder mystery storyline, a unique world, and new weapons and character customization. Your level cap is increased by 3, and you have three new science weapons to find.

For you lorehounds out there, the second DLC will mark the final adventure of one Halcyon Helen, a fictional character in the world of The Outer Worlds who stars in the serial called Terror on Monarch. She is basically the murder victim in the DLC title; guess it’s up to you to find out what happened.

The Outer Worlds: Murder on Eridanos will be out 17th March for PS4, Xbox One, and PC.

The last DLC, Peril on Gorgon, was a really fun DLC that’s worth the money. Find out more about it in our review.Â

Xbox Is Ticking All The Right Next-Gen Boxes, Better Than PlayStation So Far

Warhammer Underworlds Online Is Now Out Of Early Access