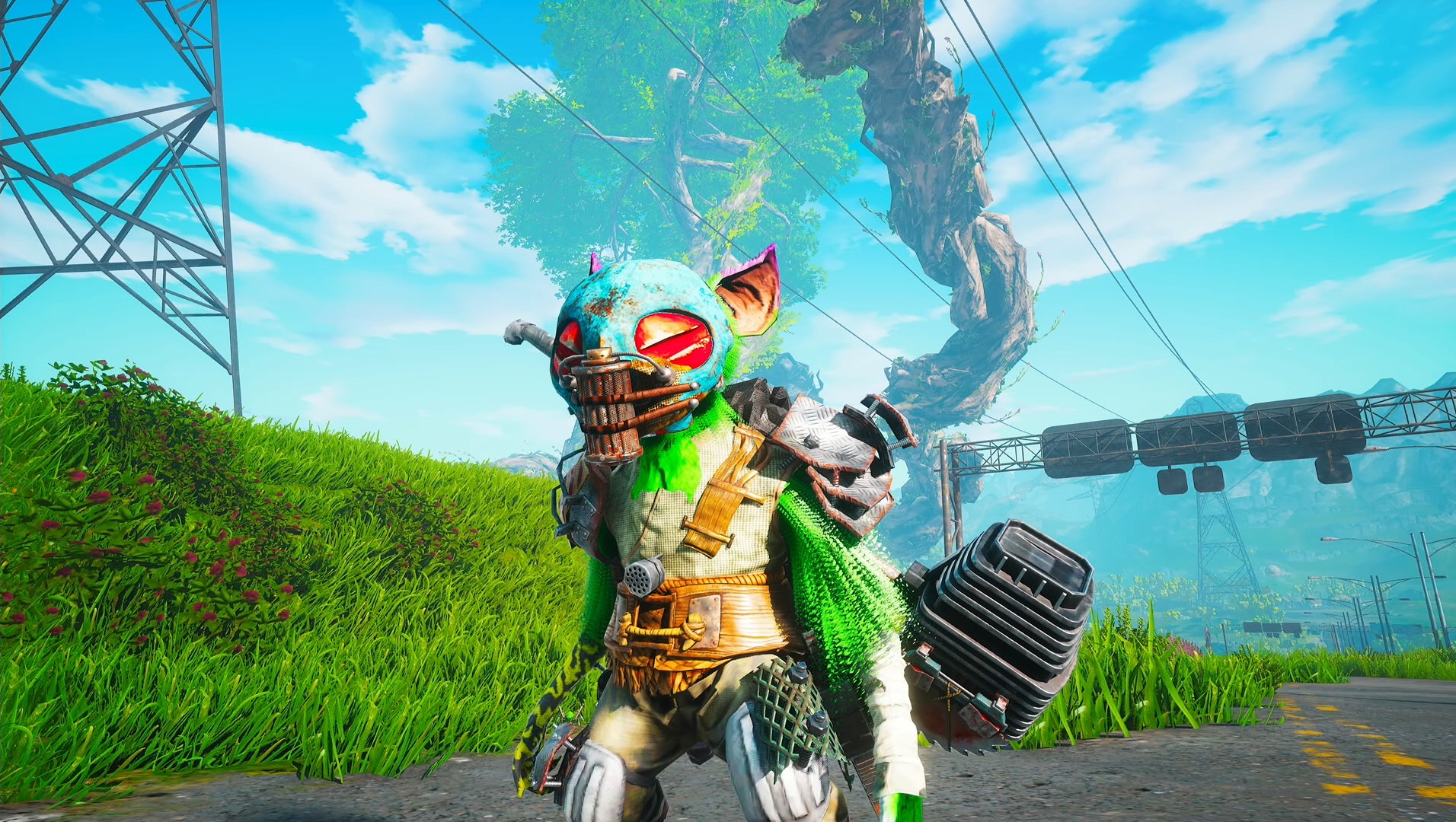 Initially, you start off as an ass-kicking animal wanderer (whom you can customize from fur colour to class type) and are spoon-fed the story from narrator David Shaw-Parker. Basically, you’re in a world ravaged by pollution and it’s now populated with mutated animal hybrids like your character. You’re tasked to set things right by fixing the Life Tree by uniting the different animal races and destroying the World Eaters residing in each corner of the world. At the same time, your character has an adversary in his/her past who you will confront eventually at the climax of the tale.

Or you can choose the dark path and conquer each and every one of them (or literally burn it all) with your elite skills. Either way, expect the narrative to be pun-filled and self-aware in its own sci-fi-slash-fantasy settings. David’s voice here shapes the narrative in a charming and invigorating way, with additional fun VO work from your Light and Dark conscience chastising you or encouraging you to make the right decisions.

Your critter avatar can also do this world’s version of martial arts called Wung Fu where you can fight either melee and ranged, as well as have mutant powers and psi-powers based on your Light and Dark alignment. You can choose to either be a goody-two shoe for Light points or be an anti-hero to garner Dark points. Also, you can mount demon goats, summon a mecha to cross hazardous environments called Dead Zones, and ride on a small boat called a Goopjet to cross dangerous waters.

All of this is a lot to take in, to the point that it’s easy to get overwhelmed. And half the time, the presentation and cutscenes of the game feel a tad subpar despite being cute and having that European all-ages cartoon feel ala the Fable series of games.

Having said that, I’m happy that Biomutant takes its time in letting you discover everything on your own and doesn’t hold your hand most of the time. I wasn’t impressed from the get-go after the mandatory 1-hour tutorial that pit you in a linear underground area that taught me the ropes of melee and ranged combat.

8 hours later, after figuring out how my character should play like, I already am a believer of what Experiment 101 is doing here with the action RPG open-world trappings it’s laid out. Simply put, it hooks you in after you’re patient with it.

While it isn’t perfect & can get rough around the edges -keep in mind that the game is made by 20 people within 4 years or so- I definitely enjoyed my 23-or-more hours with Biomutant.

I’ll address the mutant elephant in the room: if you go in thinking Biomutant is going to be a Devil May Cry-style action game, you are one-fourth right. I know I did, since I went into Biomutant thinking as such prior to getting my review copy.

Yes, there are elements of chaining and dodging in play here. There are special moves called Wung Fu moves you can use for big damage and deal with enemies in any applicable situation. You can chain these skills in alternate fashion to enter a “Devil Trigger”-like state for more powerful and faster moves (called Super Wung Fu here).

However, it’s all executed in a pretty janky way, with no oomph and pizzaz in every strike here and there. My Super Wung Fu multi-hit attack saved my bacon a number of times, but it doesn’t look impressive like a super move should with lacklustre sounds and impact. When I’m brandishing a two-handed sword, the attacks don’t connect as much because of how much forward movement you generate from your default swings.

Other weapons like the Crush type two-handed tools and dual weapon options feel more in-line with how it should be in an action game: one is slow and has AoE attacks while the other comes out lightning fast. Melee moves lack consistency here.

On the opposite end of the spectrum, the gunplay feels good here and has some weight & impact behind all the bullets you’ll be firing. I had a blast firing guns one-handed, dual-wielding pistols, and using an assault rifle with multiple fire rates. Not only do you have infinite ammo, but you also have gun-based and ranged Wung Fu moves to deal massive damage while also attempting chaining opportunities to go Super Wung Fu. However, reloading here is a bit weird as you’ll go in the same reload cooldown state regardless of the ammo count in your current magazine.

This is the bit where I realize that Biomutant’s main combat engine is basically a third-person shooter with the camera panned back, with a super sped-up bunch of controls and actions. It took me quite a while to acclimatize myself to the controls, as the game offers some “auto-aim” when it comes to your melee, but its auto-target can get finicky with multiple combatants all around. I never once died from these clustermuck of a violent monster mob since I went for the keepaway approach, but it can get frustrating when your Super Wung Fu attacks end up targeting a weaker opponent instead of the big giant blob of death coming after me.

If you have a chance to play Biomutant on mouse and keyboard, do so. It’s far from terrible on a controller setup, but I wager you’ll have fewer aiming issues with the PC input method of choice.

To add context to Biomutant’s combat mechanics from my perspective, I started out the game as an all-rounder jack-of-all-trades Deadeye class, with more focus on gunplay stats and intellect so that my stamina/energy meter regenerates quicker. Your stat points allocation really matters here: min-maxing agility and energy regeneration skills mean your melee and toughness stats are going to fall behind.

As a result, your sword attacks aren’t going to be as effective or useful. Likewise, putting all your points on health and strength will make you easily open up more Wung Fu special combos at the cost of slower energy regeneration, less damage from your guns, and limited magic use. In other words, you must be careful how you spec your character from the get-go.

Thankfully, you’ll also be doing a number of non-fighting bits in Biomutant’s version of Earth: the game gives you more to do in its utopian wasteland, which is where the game’s magic draws you in and make you lose countless hours. Once you’re out of the tutorial and get your bearings after an hour or two, preferably choosing a tribe to ally with, you’re left to your own devices on how to tackle your main quests.

You can also put that on hold and just find old-world relics and loot from abandoned places to mod your weapons with. You’ll also solve a number of puzzles involving rotating bits and pieces of cogs (or other mechanical thingamajigs) to uncover secrets and open up new passageways to new territory and danger.

And more loot and mods, of course. Oh yes, Biomutant has a deep crafting system that’s easy to follow and only requires you to venture out and explore the world to get the best mods. Buying them with literal greens (the currency is leaves) will cost you a lot, and you’d rather spend money on health and energy packs.

This means going out of your way to finding spare parts and secrets to help upgrade your current tools is paramount to your success. Wandering around with no clear goal in mind feels great; that’s what Experiment 101 succeeds in doing. Giving you that sense of agency and freedom, as well as a beautiful yet dangerous world for you to faff about for hours on end. And also giving you the tools and opportunities to build your uber-avatar wanderer.

Best of all, even if you’re done with the main storyline, you can play New Game Plus mode with all your items, level, and equipment (no quest items though) to ally yourself with another tribe and start over. Maybe even discover the other path you can take and unlock different ending conditions; Biomutant’s world is indeed yours.

I’m glad a game like Biomutant exists; everyone needs to at least experience its familiar-yet-refreshing experience in a lush utopia filled with forests, deserts, taigas, highlands, and irradiated zones caused by mankind’s folly & greed. You have 20 hours or so to go through the game’s story campaign and figure out if the world you’re in deserves saving or scorching. All of its themes, character moments, and gameplay are done with love that it bears a soul unlike other open-world games from giant-sized game companies.

While its combat can use a bit more touchup and some presentation bits need a bit more tweaking & smoothing, the overall action and open-world gaming package offered by Experiment 101 is not to be missed. I’m already on my second playthrough, and I also created another new Biomutant avatar from scratch, so you know the devs are doing something right here.

All in all, come for the furry critters & pro-environmental stance, stay for the grand adventure.