One of my favourite game franchises is Creative Assembly’s Total War series, and a huge part of that is playing siege battles in warfare. They are always exciting and fun, but they don’t really bother to depict what it’s like being a non-combatant during these sieges.

What is it like to be a normal person scrambling to survive during a siege? That’s what Siege Survival Gloria Victis is trying to focus on; the harrowing perspective and experience of a civilian inside a siege.

From Inside The Gates 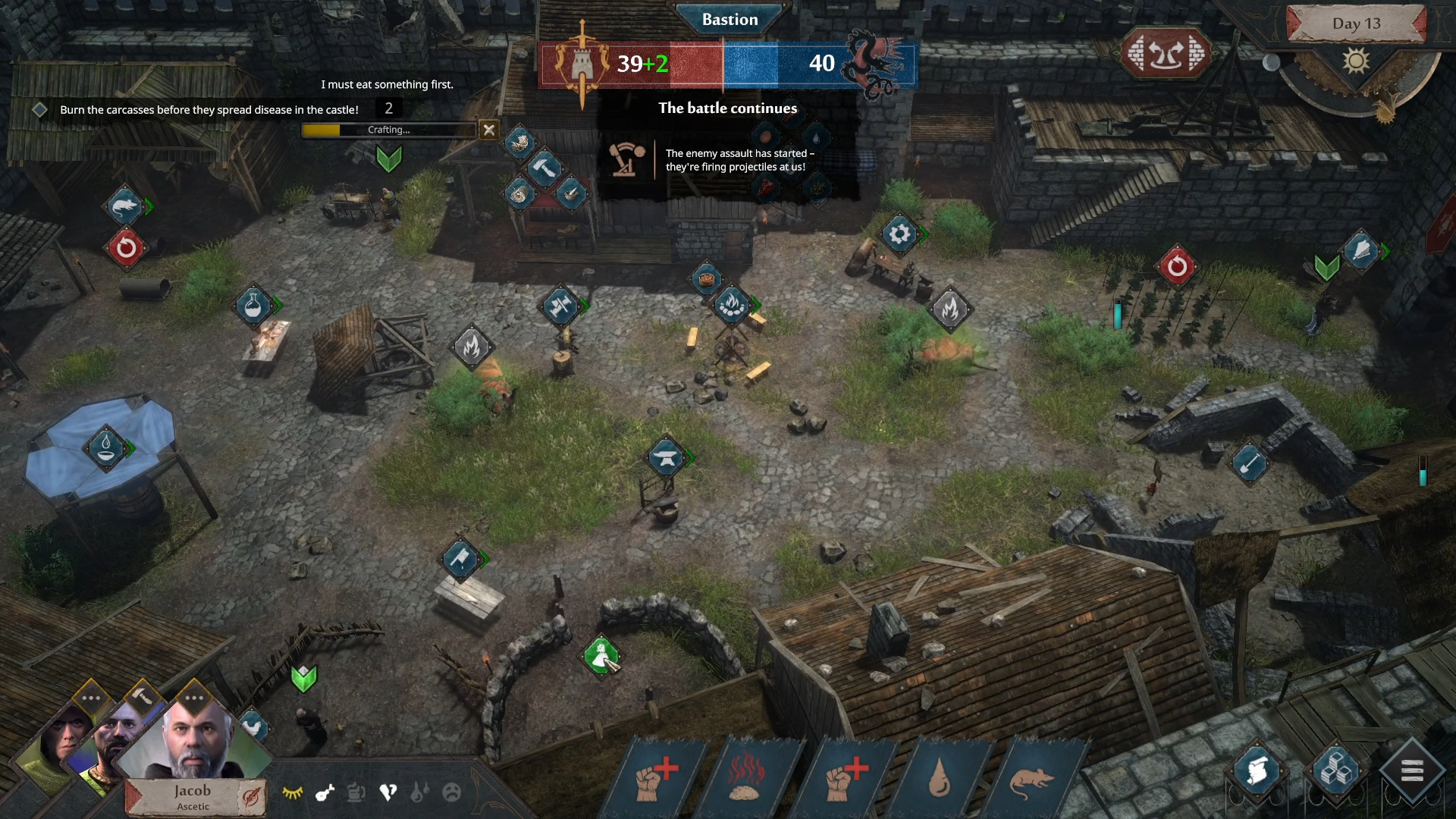 Edringâ€™s Last Stand is the only playable scenario in Siege Survival Gloria Victisâ€˜ Story Mode campaign. The game begins with a brief cinematic cutscene showing Viking-like invaders from the fictional land of Ismir attacking the player’s home city. The player takes on the role of one of the surviving civilians, who is now stuck besieged from inside a castle.

This is ultimately a strategy game that’s more of a resource management and crafting title at its core. During the day, you can have characters construct buildings and facilities such as furnaces, fireplaces, workshops, workbenches, beds, and more. To build them, you’ll need raw materials like wood, meats, herbs, water, and others, as well as new items such as planks, medicine, bandages, meals, fodder, and fertilizer.

How do you find these raw materials? Well, at night, you’ll be able to sneak out into the city in order to scavenge and salvage these materials. Meanwhile, youâ€™ll also need to manage various survival aspects such as each characterâ€™s hunger, thirst, exhaustion, and health. For example, characters who are injured or sick will need a bandage or medicine, respectively. Oh, and they also need to sleep to avoid getting tired (and therefore useless and unproductive), so you can’t just send them out every night in search of materials or else they’ll die.

While you’re doing all of this, you also have to keep watch over a continuing meta-game of sorts where you’ll need to continue supplying the bastionâ€™s defenders with whatever they need to keep sustaining the siege. That’s another layer added on top of everything, as you’ll need to send them food, water, as well as weapons and equipment (which YOU must take the time and resources to repair).

Every few in-game days, the enemies will assault the city (as an invading force would in any siege). When this happens, how well your soldiers perform will depend on what resources you’ve provided them with. If they have sufficient weapons and food, they’ll probably survive. If not, there’ll be more casualties. Oh, and during these assaults, the castle where your characters and buildings are located will be attacked as well. You’ll have to not only evade fire arrows and large boulders but keep putting out fires and repairing your facilities. 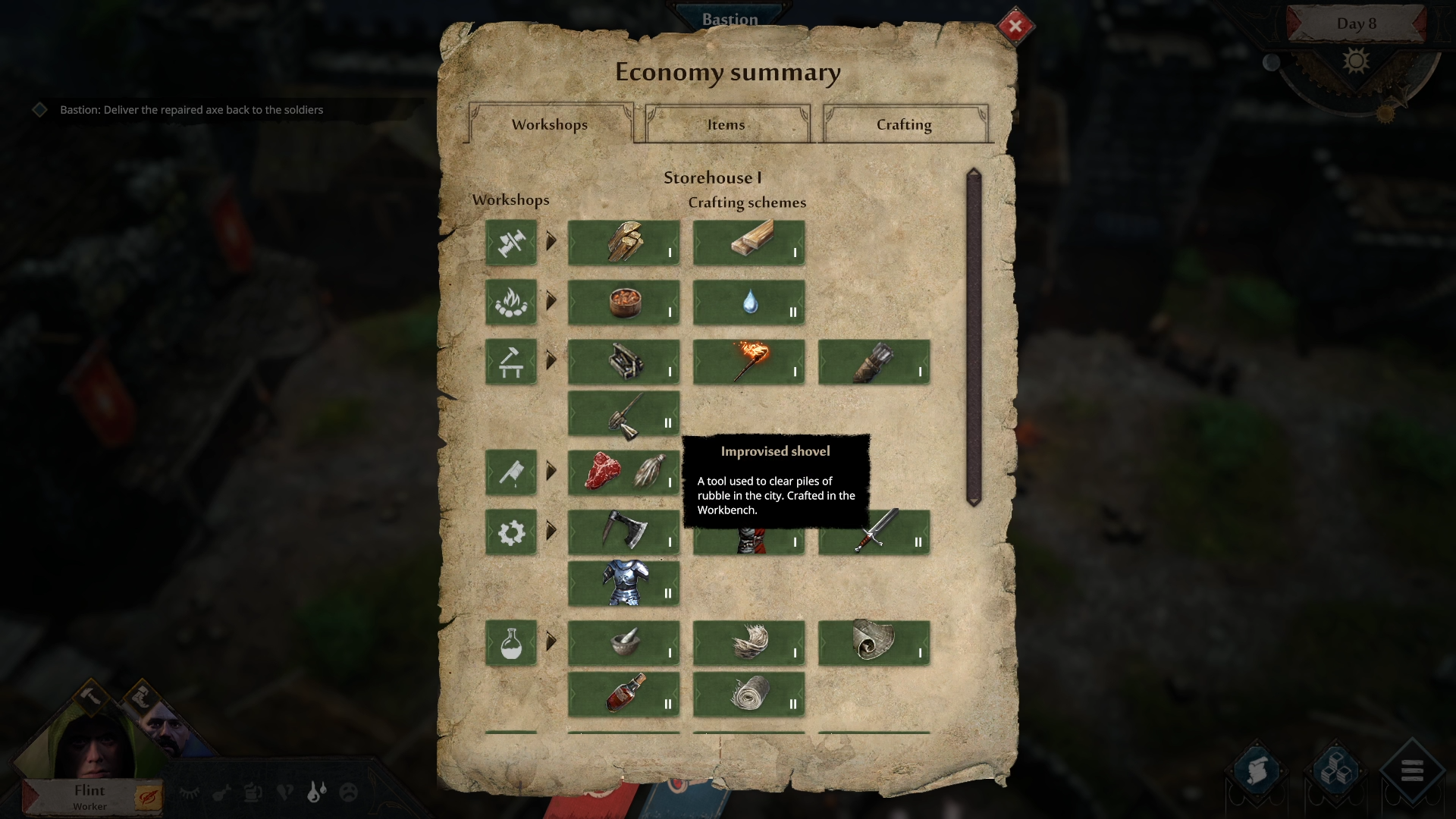 The problem with all of this is how clunky and tedious everything feels like to actually play. It’s frustrating when days and nights go so fast that you (the player) barely have time to do anything. You have to sustain your characters by keeping them well-fed and well-rested while also juggling all the other stuff at the same time, which makes micromanagement a nightmare when things get chaotic. I know this game is supposed to simulate the real terror of being besieged, but it’s all just a frustrating gameplay experience at the end of the day.

The fact that you can’t even manually save at any time that you want is annoying. The game auto-saves at the end/beginning of each in-game day, which means that what you’ve done is permanent. The developer probably wanted to instil a more permanent rogue-like feel to the game, but there’s no reason why they can’t just let players save at any time.

Another major issue is that it becomes such a hassle to multitask once you have multiple characters walking around in the same space, especially since they can’t perform the same action in the same place. God forbid I allow two or three of my thirsty castle dwellers to drink at the same time.

However, the developer did think to add additional accessibility options in a way. After surviving the first seven days of the game’s vanilla mode, you can play the other game modes, each of which comes with its own customizable features and optional content. For example, you want an easier time to enjoy the story, then you can choose Explorer. If you want more of a challenge (which would be surprising), then you can pick any of the modes under the Challenges tab. 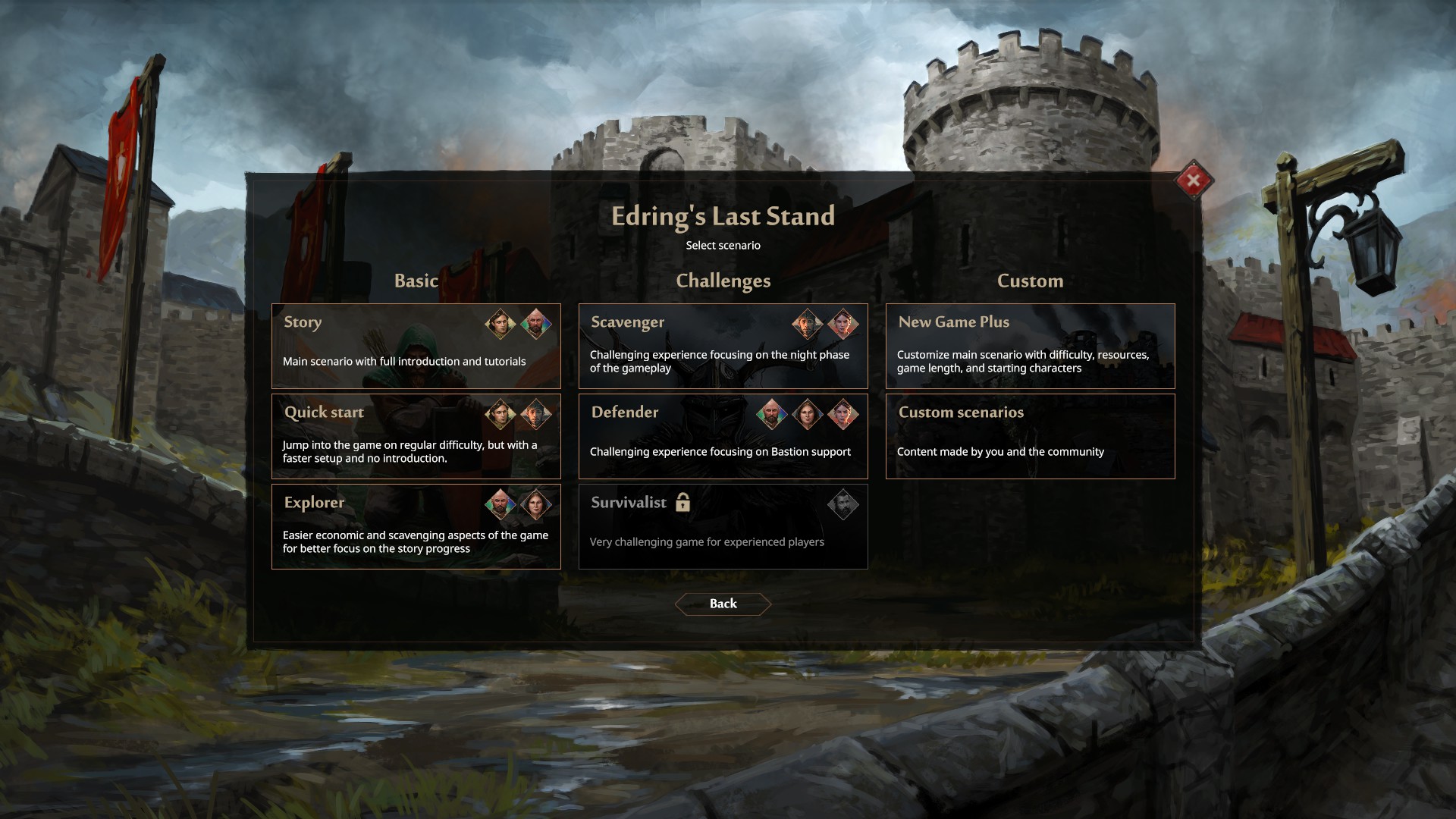 The Story Of Sieges 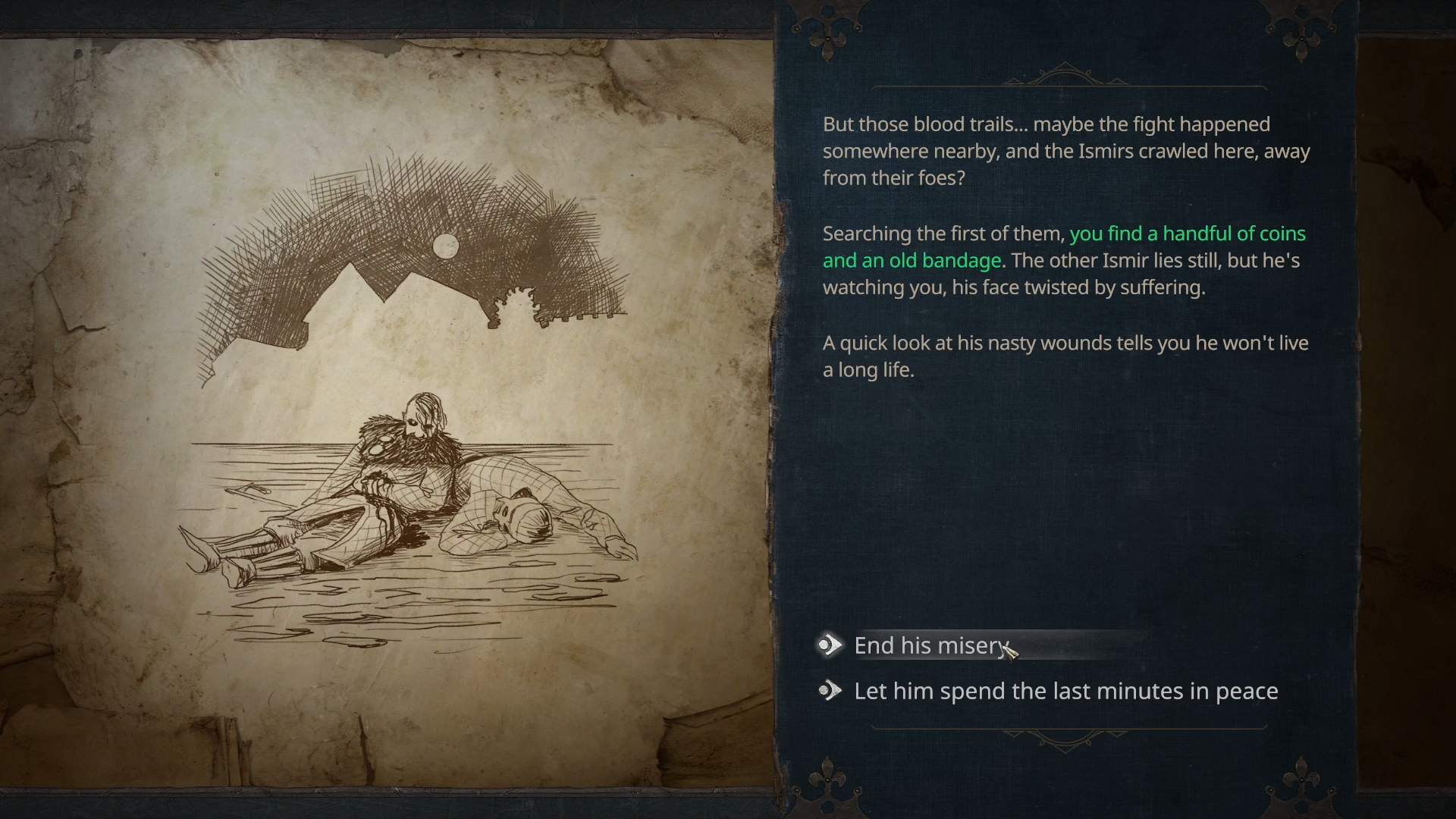 At night, scavenging and exploring the city for materials and resources, you’ll come across unique green markers with exclamation marks. These lead to story or event dilemmas that present players with dialogue and action choices. For instance, I encountered a blocked passageway at the bottom of a spire that required a shovel to clear out. Thankfully, I did have a shovel at hand, and using it allowed me to reach the roof. There, I interacted with a green marker and encountered a person, who turned out to be a recruitable and playable character.

Unfortunately, while the scripted story and event dilemmas are interesting when discovered, the playable characters in the game don’t really have much in the way of personality. That results in forgettable and unmemorable characters, which makes you wonder why it’s worth keeping them alive in the first place if it’s not for their usefulness. I guess maybe that’s the point of the game after all. 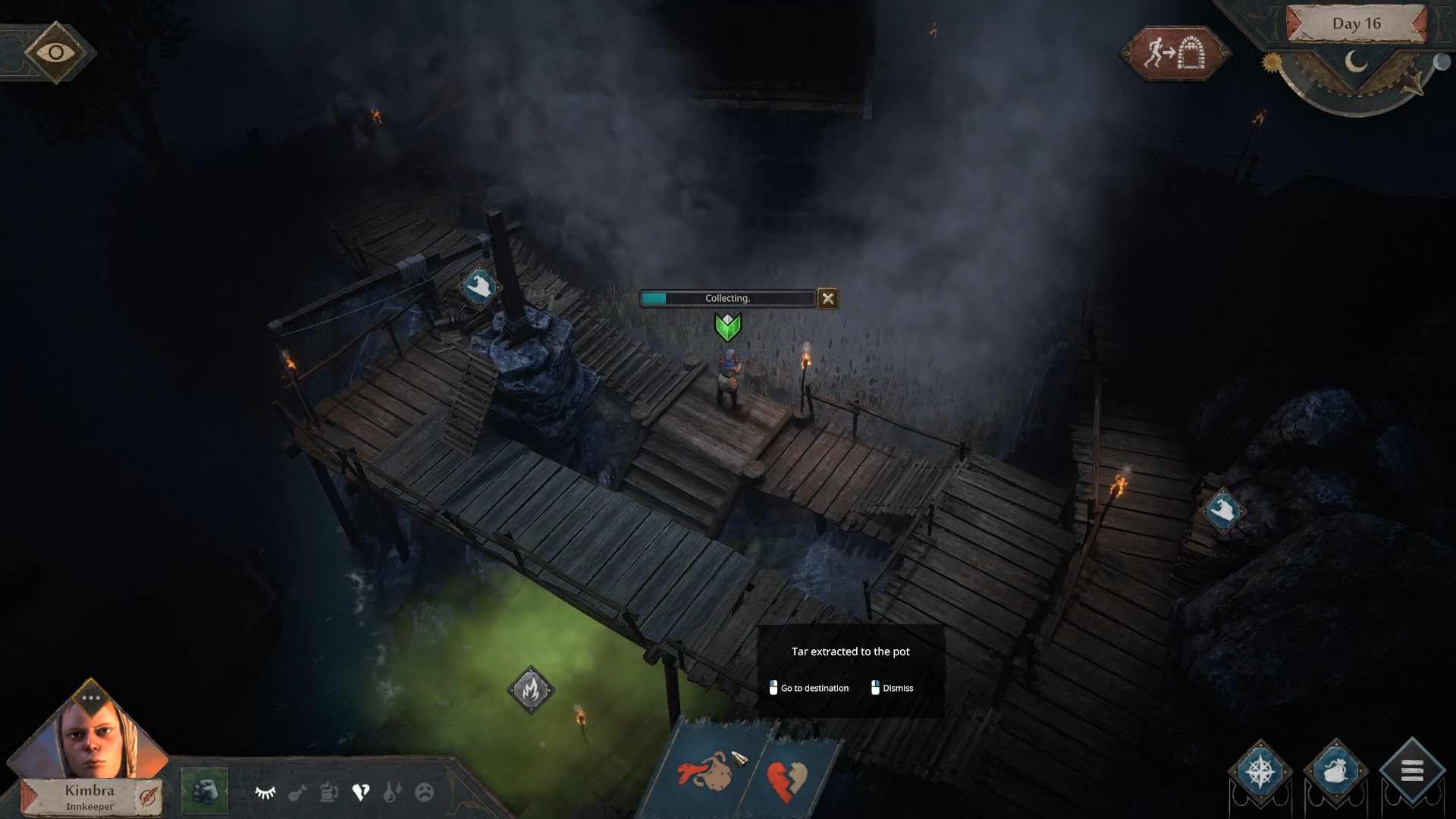 Your enjoyment of Siege Survival Gloria Victis will depend on how much you like to see human suffering. Sieges are often hellish and hopeless experiences and that’s reflected well in this game. This really feels like a survival game with strategy and resource management elements, so the gameplay isn’t good enough to make up for the overall depressing tone of the game.

With the PC version of Red Dead Redemption 2 releasing next month, Rockstar Games has finally revealed the spec requirements for the upcoming game, as...