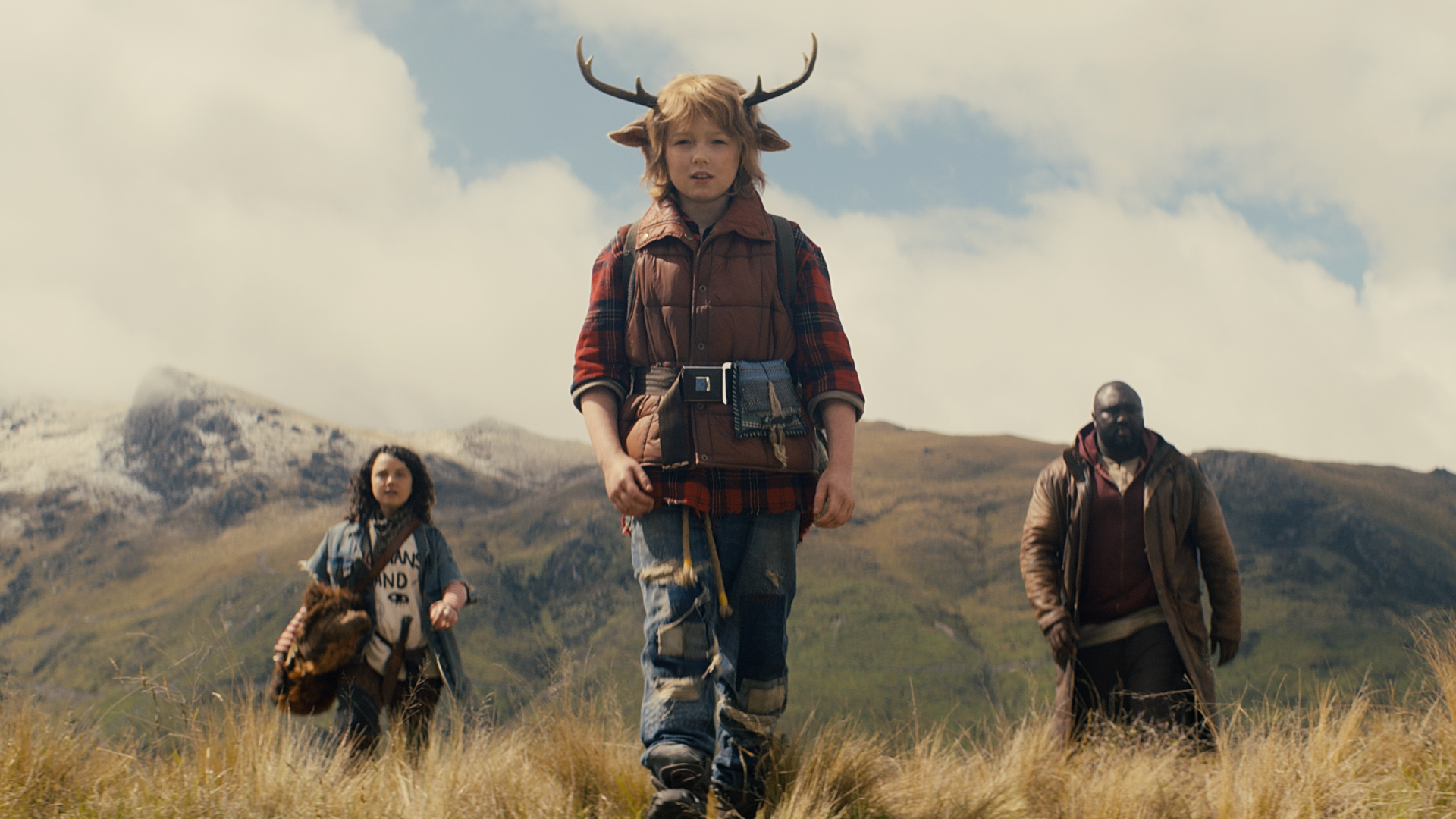 All eight episodes of Sweet Tooth Season 1 is now streaming on Netflix. Based on the DC Comic book series by Jeff Lemire,Â Sweet ToothÂ is set in a post-apocalyptic fairytale about a hybrid deer-boy and a wandering loner who embark on an extraordinary adventure.

Unsure if hybrids are the cause or result of the virus, many humans fear and hunt them.

Together they set out on an extraordinary adventure across whatâ€™s left of America in search of answers; about Gusâ€™ origins, Jepperdâ€™s past, and the true meaning of home.

But their story is full of unexpected allies and enemies, and Gus quickly learns the lush, dangerous world outside the forest is more complex than he ever could have imagined.

We managed to participate in a roundtable interview with Christian Convery (Gus) and Stefania Lavie Owen (Bear), as well as executive producers Jim Mickle and Beth Schwartz, courtesy of Netflix Malaysia. This interview has been edited for clarity.

Q: What was it like filming during the pandemic and what were the biggest challenges that you faced?

Christian Convery (Gus): When we made the pilot episode back in 2019, we had no safety protocols, it was really easy and it was like on a normal set but when COVID hit, going to work during the pandemic was a really tough experience, but also a really easy and safe one.

Because the people on set; the crew and everyone who worked there was so effective at following the safety protocols and at the same time, staying on task. But also, we couldn’t hug on set, or high-five, or fist-bump so those little things just make it kind of hard to adjust to.

The most challenging parts of bringing Gus to life was definitely his deer-like aspects. I’m a boy, not a deer. Having to incorporate those two things into one character was a really tough experience but at the same time really unique and fun to do.

Stefania Lavie Owen (Bear): Yeah, I think Christian covered it. One of the good parts was that we could use our actual experience being in a real-life pandemic for the screen but then also, I think the hardest part was not being able to see each other as often as we would have. Yeah, I love a hug and I couldn’t do that, but that was the toughest part and we got through.

New Zealand is the country to be in during a pandemic and so, being in a country that dealt with the pandemic so well was a very positive thing.

For me, the biggest challenge was I had the animal army, which was so fun, but after a couple of episodes, they were gone. I was a little bit isolated when filming at the beginning because we were in a pandemic and we couldn’t hang out as much as we wanted to, which worked for my character as well, but I dealt with my mental health during filming and I felt like Bear is also dealing with mental health because she loses everything and has to start again. So, I really felt those feelings that Bear felt, those feelings of uncertainty. Not sure of what my direction was, it really paralleled that and in the end, when Bear finds her purpose, I felt that with her.

What I took away from playing Bear was that you have to go through challenges in life and it can’t always be perfect. You can’t always feel happy. Even when it feels confusing, you have to keep moving forward and I think that’s what Bear does, even if she doesn’t know where she’s going. All she knows is that she connects with Gus and she sees something in him. She has to protect him and she has this friendship that’s really strong. Yeah, she’s unsure where this will lead but she keeps going. I really learnt a lot from Bear in that respect. You just keep walking even if you don’t know the destination.

Q: How did you prepare for your roles and what were the most challenging parts?

Christian Convery (Gus): Preparing for the role of Gus was a really interesting and amazing experience. I don’t think anyone’s trained and prepared to become a deer before. Getting to do that was pretty hard, learning how deers adapt to their surroundings and to their senses; their reactions. I also had to do lots of parkour training where you have to run and jump on different walls. That was definitely some of the hardest parts of having to adapt to the role of Gus, but also some of the best because I got to play such a unique role as a part deer, part boy.

I also got to learn some new things, like a fun fact; deers shed their antlers every spring. Getting to do all that research on deers was an amazing experience.

Stefania Lavie Owen (Bear):Â For me, there were a few things that helped me prepare for the role of Bear and one of them was I did a paper while I was filming. It was the subject of cultural anthropology at the local university and it was a study of indigenous cultures. I got to learn about the different ways of life that these indigenous cultures practice and still practice now in relationship to this society we’re living in now. This was really helpful for Bear because she’s unsatisfied with the way that the world has developed and she believes in a relationship with the Earth that’s more close. She thinks that there’s been so much greed and she’s angry and so, for me that was easy to draw on because I also feel passionate about healing the Earth and also thinking about ways that we can be better as human beings in this society.

That was all helpful and also, I got to do some training with the stunts as well so I got to do fight training, which allowed me to feel empowered in my body and learn how to fight. So yeah, those things really helped me prepare for Bear.

Christian Convery (Gus):Â I read all three DC Comics books (Sweet Tooth collected volumes) and they were really, really dark. Like really dark and definitely not family-friendly. I also really like how the scriptwriters took a really dark comic book and also made it family-friendly while still keeping those dark aspects but fit for the whole family more so. While I was reading the DC Comics comic books, I studied my character and the characters around me. Learning about Gus, his attributes and aspects really helped me bring him to life on-screen. That’s what I took from reading the comic books.

Stefania Lavie Owen (Bear):Â For me, I was able to buy a few of the comics, Just the original ones so they were small ones (single issues). Then, when I was on set, one of Christian’s doubles, he had all the comics. While we were filming, he would give them all to me and ask me; what bit were you up to? It was really cool to film and read them at the same time.

For me, what really stood out in the comics is that even though they were dark, the friendships within the comics were so strong between Gus and Jepperd. The twists were incredible so that’s what I felt shined in the comics.

Q: The original comics by Jeff Lemire were much darker. Why did you decide on a lighter and more family-friendly tone?

Jim Mickle: For me, it was trying to find a new way to look atÂ the end of the world that we haven’t seen. A lot of similarities, obviously, with apocalyptic movies and television and books. One of the big things that came from that was looking at how stuff like nature would actually thrive and would actually wind up with really beautiful landscapes because of that.

Gus is sort of the compass that drove every decision and the point of view of the story. We really started to frame it as a much more Spielbergian kind of light tone, with a little bit more magic, more scope, the colours are a bit more vibrant. Even in the comic book, even when it was dark, Gus was always hopeful. There was like a naivete to him that was sweet so I think the idea just happened to be a fresh way of telling the story.

Beth Schwartz: Obviously, the comic book is a lot darker, but we took a lot of the ideas and things that were in the comics. I think and hope that we expressed the essence of a lot of those things. We took what made it different; the hopefulness that we found in a post-apocalyptic story. But we were still able to tell a story through Gus, our little deer boy’s point of view seen throughout the comic book.

Q: How was original comics creator Jeff Lemire involved with the making of the show?

Beth Schwartz:Â Jeff has obviously been a huge supporter of this project and I know Jim worked with him on the pilot. He (Jeff Lemire) was even able to come to set for the pilot before COVID happened and he’s been a really amazing partner. He believes in us and he gave us the freedom and permission to make our version of Sweet Tooth. We sent him a script and he gave us his blessing. He’s also been enjoying it as a fan himself, which is the most that you can ask for in this situation. He’s been a cheerleader and obviously so pivotal to the process.

Beth Schwartz: I would say Christian (as Gus). He’s so sweet and he looks at everything like it’s an adventure. He’s so positive, he loves life and adventure.

Jim Mickle:Â And then maybe, I’m gonna say Abbot (played by Neil Sandilands). *laughs* Not in the way that he wants to kill kids, but in his eccentric behaviour. But I think also Dr. Singh (played by Adeel Akhtar), not in a bad story way, but there’s a very human way to the Dr. Singh character that I feel like Adeel does very well. He’s such a kind, gentle, sweet, incredibly funny person and I think that comes through a lot.

For example, Rani (played by Aliza Vellani) has a Canadian accent, as is the actress in real life. Everyone is performing in some way and Adeel gets to be himself in some way in that character.

Beth Schwartz: I would also say Will Forte (as Pubba) too. He’s so kind and I think his performance is so believable as Gus’ father because he’s so warm-hearted. I don’t think you’ve ever seen him play a character because he’s so funny. I can’t think of another role he’s been in where I feel like you truly see what kind of person he is. He’s one of the nicest people I’ve met.

Q: Was there anything that you had to change due to the pandemic; besides having to follow certain SOPs?

Beth Schwartz:Â There really wasn’t anything huge. We had planned already an entire season before the pandemic hit and we had already gotten everything approved by Netflix and by Warner Bros. and we had written three and a half scripts by the time the pandemic hit. The largest thing that I can think of, production-wise, was in episode six on the train. The train was supposed to be a passenger train instead of a cargo train (which ended up in the episode).

We didn’t want to use tons of extras for safety reasons and now I can’t imagine the episode not having a ton of choco rockets and toilet paper. Those were slight changes that were made because of the pandemic.