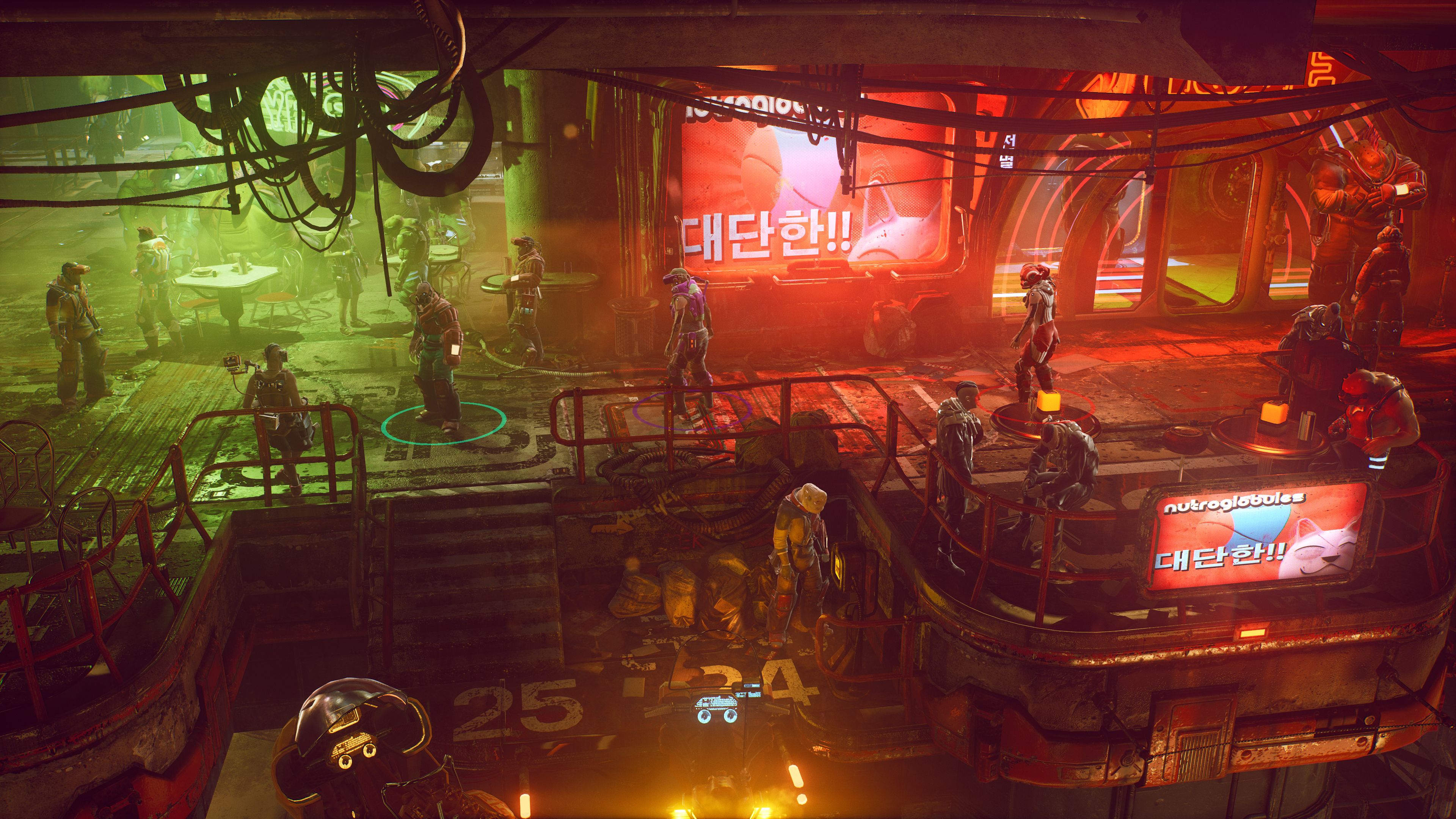 How does a sci-fi action RPG like The Ascent set itself apart with its twin-stick shooting gameplay? If you’re developer Neon Giant and publisher Digital Curve, the answer is to just add a little extra that hasn’t been seen before: making height & cover matter.

The Ascent’s combat, which you’ll see plenty of as you play through the 15 hours-or-so story, requires you to use the Left Trigger and B button to aim “iron sights” and crouch respectively. While you can fire at enemies when aiming at them with a combination of the right analog and Right Trigger, blasting at them with LT held will stun and stagger them. Plus, you can attack enemies and traps set at higher levels that way.

Conversely, you cannot shoot down low height/short enemies with iron sights, so you’ll have to switch it up when you go guns-ablazing. Taking cover will also improve your survivability since a group of gun-wielding foes can end your day quick if you’re out in the open; you also can shoot out of cover with the LT button held.

In essence, you’re playing the game’s twin-stick shooter like a third-person shooter ala Gears of War. While you can barrel through enemies if you’re at a higher level, you need to play smart and defensively about 80% of the time when you’re slowly ascending your levels and gear. Which is why I’m happy that the shooting and blasting sounds, looks, and controls great. Once you’re done with the first underground tunnel stage, you’ll then be treated to loads of cyberpunk sci-fi backdrops and visuals to shoot down cyber-samurais, heavy gun-wielding aliens, and mechas in.

Coupled with a plethora of guns both regular and unique from energy rifles to a salvo rocket launching gun called the Astrominer, to Tactical gear and Augments for additional attacks, support, and buffs, and you got yourself a fun old options-filled time. I went for a critical hit and hit points/energy points-heavy build so that I can hope for the best when damaging foes with cover fire and fire/energy-laced machine gun spamming, as well as have enough energy to cover my flank with Spiderbots and a super-powered area-of-effect leaping slam with short cooldown time. But really, they make awesome sounds when they connect.

Personally, the game’s combat, gorgeous sights, and rip-roaring sounds are the only things making me persevere through The Ascent, because it is sure as heck isn’t the story doing the heavy lifting. Yeah, the sci-fi corporate town dystopia spiel is fine and all, and you get some interesting sights and nuggets of lore about the corporate-run planet you’re stuck in as a literal slave trying to fight his/her way to freedom. However, there aren’t any interesting characters to keep my attention; even the supposedly humourous hacker Noghead isn’t enough to stop me from pressing the Skip Cutscene button. Repeatedly.

There are also the technical bugs souring my enjoyment by a tad. I had to restart the game a couple of times in single-player mode because I couldn’t get to the next area or the intended quest marks I have to kill aren’t showing up. Co-op online also spring up a ton of glitches in the proverbial matrix from hosting and joining new games, to stalled crossplay connections.

There are also a number of user interface issues with some text and icons way too small to distinguish and read. Hopefully, there’s a patch or three to sort all of these out.

For RM90 or so, you’ll have a jolly neon-filled dystopian-blasting old time with The Ascent. Just don’t expect a grandeur tale ala Cyberpunk 2077, though you’ll have a meatier action RPG experience.