Marvel’s Guardians Of The Galaxy Outfit Guide: How To Unlock Them All

The new Guardians of the Galaxy game from Square Enix and Eidos Montreal (which we really love)Â features a ton of costumes and throwbacks to the comics of old. There’s quite a number of them to collect, so you have your work cut out for yourself.

Thankfully, there are no microtransactions here; you can find all of them in-game and if you take your time exploring each Chapter which you can revisit over and over. Here are the costumes. 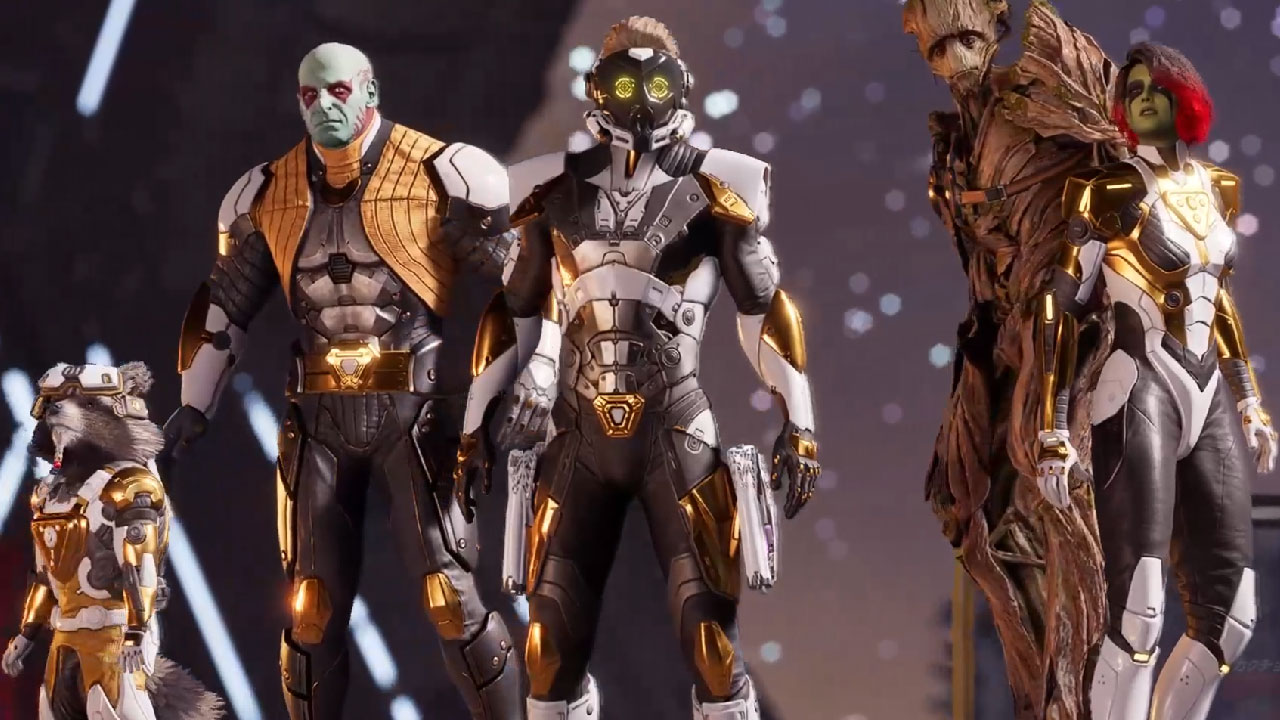 This awesome costume for everyone in your team can be unlocked by starting Chapter 14 of the game.

Early in the mission, you’ll come to a junction; Rocket will tell you that way is a dead end. While he leads Groot through the small opening on the left, you should head towards the route that looks like bones.

Head to the “inside” of the stage where it’s less pink and pretty dark. Keep heading forward until you see a pink blockage with a small hole in the bottom.

Head towards it and you’ll crouch down and go through the hole. Groot’s MCU outfit is inside. 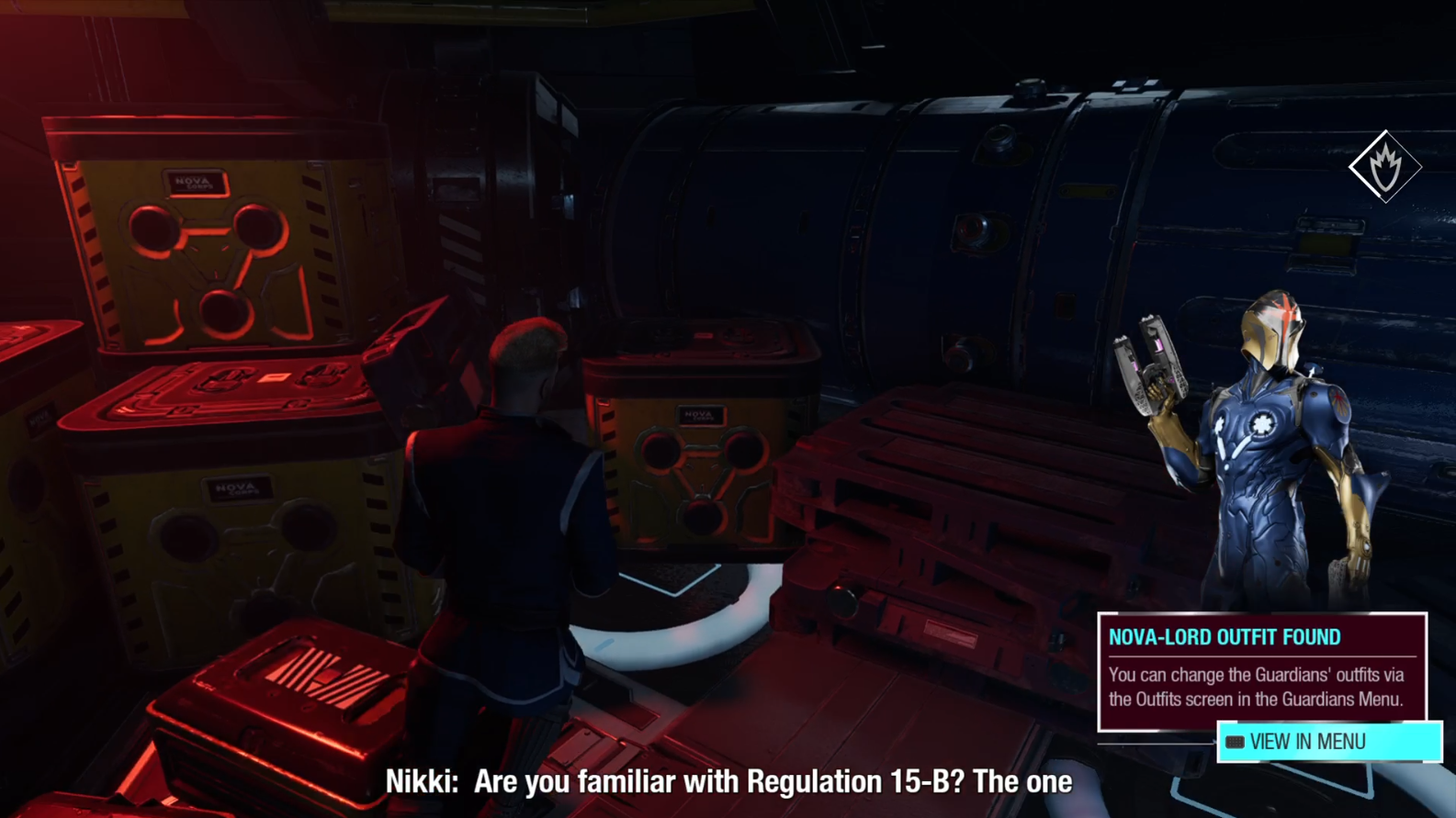 When you’re walking through the bowels of the ship you’ll get to a point where you have to help Cadet Gold block some flames by pushing a box across them.

As you move forward, she will go right but straight in front of you is a small cut-through. Go straight forward and through it, follow the path and you’ll find the outfit box for Star-Lord’s Nova Corps outfit.

Arguably one of the hardest to find. Head through the mission and approach a forest-like area. You’ll see a red structure overhead. You’ll trigger an interaction with Gamora while she’s looking at tracks on the ground.

Turn right here, follow the path to the end, and then turn left. Head through the small opening into a cave. In the back right corner of the cave, destroy the gunk to head through another small opening. You’ll now have to defeat some of the jelly cube creatures; after that encounter, clear one final opening and climb up to claim the outfit.

This outfit is overlooking the arena where you fight the two creatures to acquire the cage. Follow the mission path; once you get Groot to provide a bridge, head left instead of right. Use the element gun to freeze the geyser and use it to ascend to the upper tier and open the box. When you’re at the spot where you avoid the first death drone, your mission path will be through the door on the left. Forget that for a moment and instead go straight. The side area will become visible. Drop down and traverse the area and at the very end is the costume box.

The mission path will bring you to a fork, with the rest of the Guardians going right. Turn and go the other way and tucked up against a blocked path you’ll find the box for Rocket’s Five Horsemen of the Apocalypse outfit. 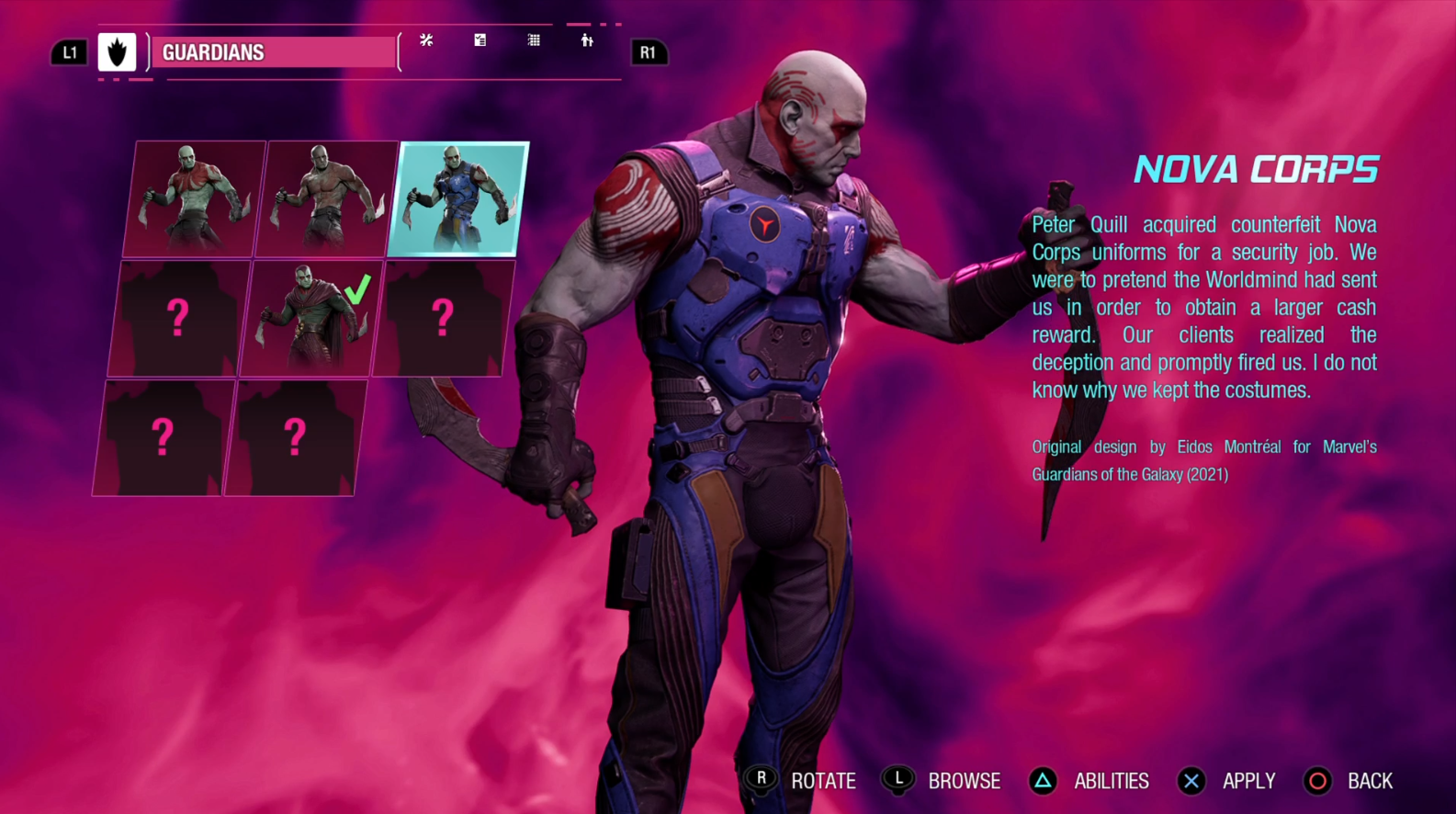 Early on when you find yourself in the room where you have re-route the power to unlock the door in order to proceed, there is a second door to unlock.

Using Star-Lord’s visor, direct the power to the left-hand door which will open and give access to a bathroom. Just inside the door on the left, you will find the costume box.

Later in this chapter, you’ll come to a room where you have to climb up a thing that looks a bit like a scissor lift. Instead, head towards the back of the room, and then hiding behind some boxes on the right-hand side you’ll find this costume box.

This costume is located in the central area of Knowhere after Mantlo’s Bar, after you’ve been separated from the team. When you see the structure with the upper deck and a staircase to the left of it, you need to aim between the two. There’s a cut-through onto some red pipes. Hop the barrier onto the pipes, turn left and follow it to the outfit box.

When trying to remove the clamps for the second time on the big Nova Corps power conductor, you’ll head into two rooms. In one of them, use Star-Lord’s visors to help redirect power from the electrical switch to the small door on the right. Head through the door to get the costume box inside. Head to the same staircase you went down with Nikki Gold back in Chapter 2 (the bit with the water flooding in). Head to the very bottom and you’ll find a switch on the wall to turn off the electricity with Star-Lord’s element gun.

Next, direct Gamora to cut through the vertical pipes in the corner, then squeeze through and find the box containing the Gamora Nova Corps outfit.

When escaping from Raker you come across a pool of red liquid where you have to escape down a drain. As you reach the bottom of the slope, there is a large box to the right.

Get Drax to move it and place it over the gap you just emerged from. Climb the box, jump over the ledge and as you drop down the outfit box will be in front of you. 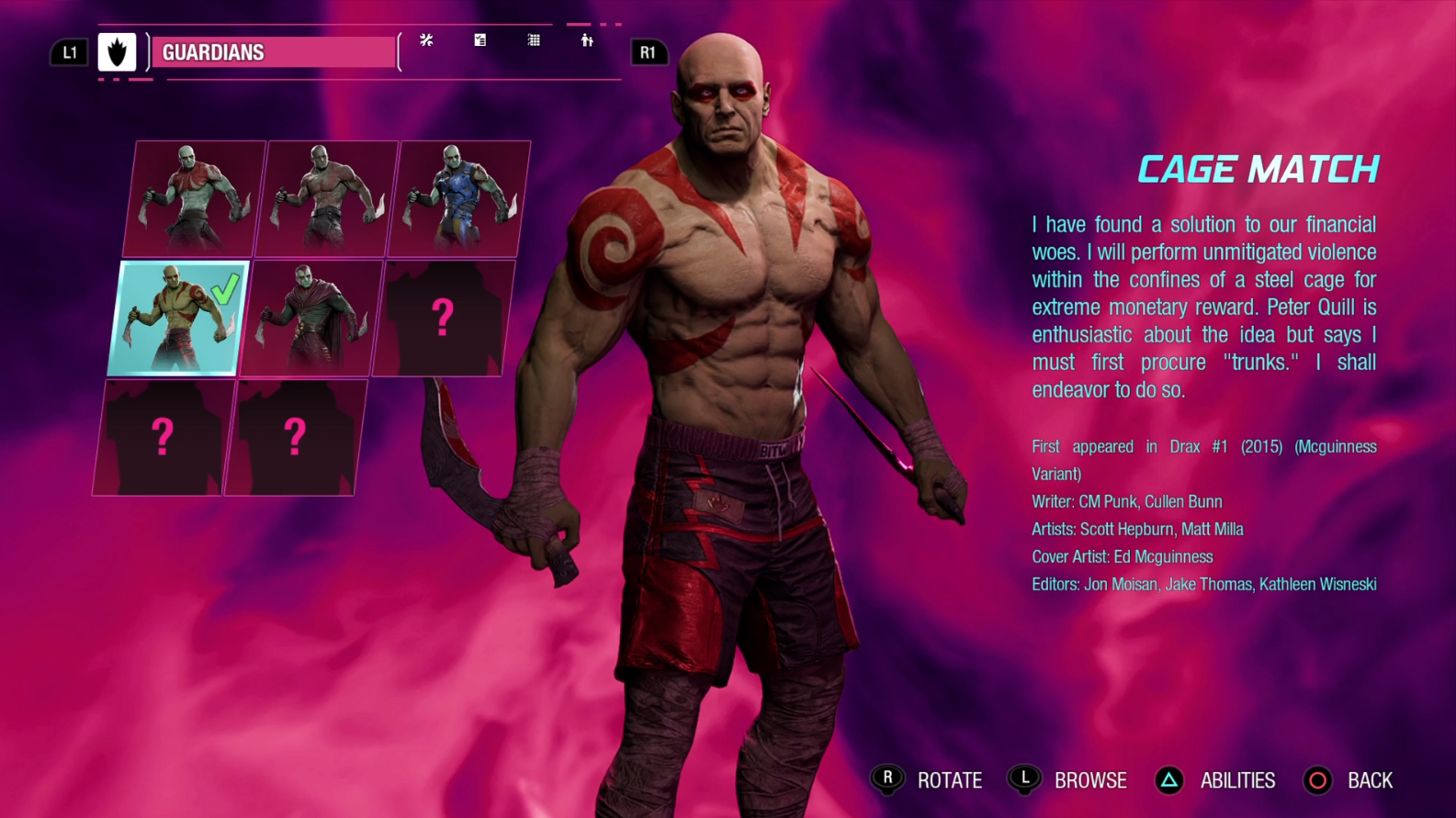 When you come to this room with the large circular drop in the middle surrounded by a walkway, go to the direct opposite side to the door. The costume’s just right ahead.

When you first enter the cave and come to the river you have to cross with a waterfall to your right, head straight through the waterfall. On the other side and off to the left is the costume box.

As you emerge from a small cave there will be a ledge on the right-hand side. Jump up onto this and go straight ahead and cross the walkway where you’ll be edging along a rock face. The costume box is on the other side.

Head further to the chapter where Groot is lighting the way. As you advance, the mission path will take you left. Head a little and on the rigth side where there’s a small gap in the rocks with plants growing around it. Squeeze through here for the outfit box. You can find this outfit at the beginning of the chapter. Jump up onto the right-hand structure after dealing with the enemies nearby. Then jump the gap to the other structure to get to the box.

Head to the ruined Knowhere marketplace. You’ll come to a location where your mission path takes you to the left. Keep going straight; on the right side there will eventually be a blockage to clear using the wind element from Star-Lord’s gun. That’s where the outfit’s box is.

There’s a bit halfway in the Chapter where Drax has to break a hole in the floor to proceed. When you slide down the newly created ramp, turn around and you’ll see a small opening to crawl through. Go through here and you’ll find the box for Gamora’s Casual Kill outfit.

Once you’re done with the fight on the white brain donut thing in the Chapter, you’ll get Drax to move a large box to progress. Climb up the gantry, then head to the end of the nearby panel; command Gamora to jump up and anchor on to throw you to a higher platform. That’s where the costume box is.

There’s an early part of the Chapter where you cross a narrow ledge pressed up against the wall. You’ll find a small opening in the mountain; go left and inside. Keep an eye out on the right corner of that passage; the outfit box is nearby. 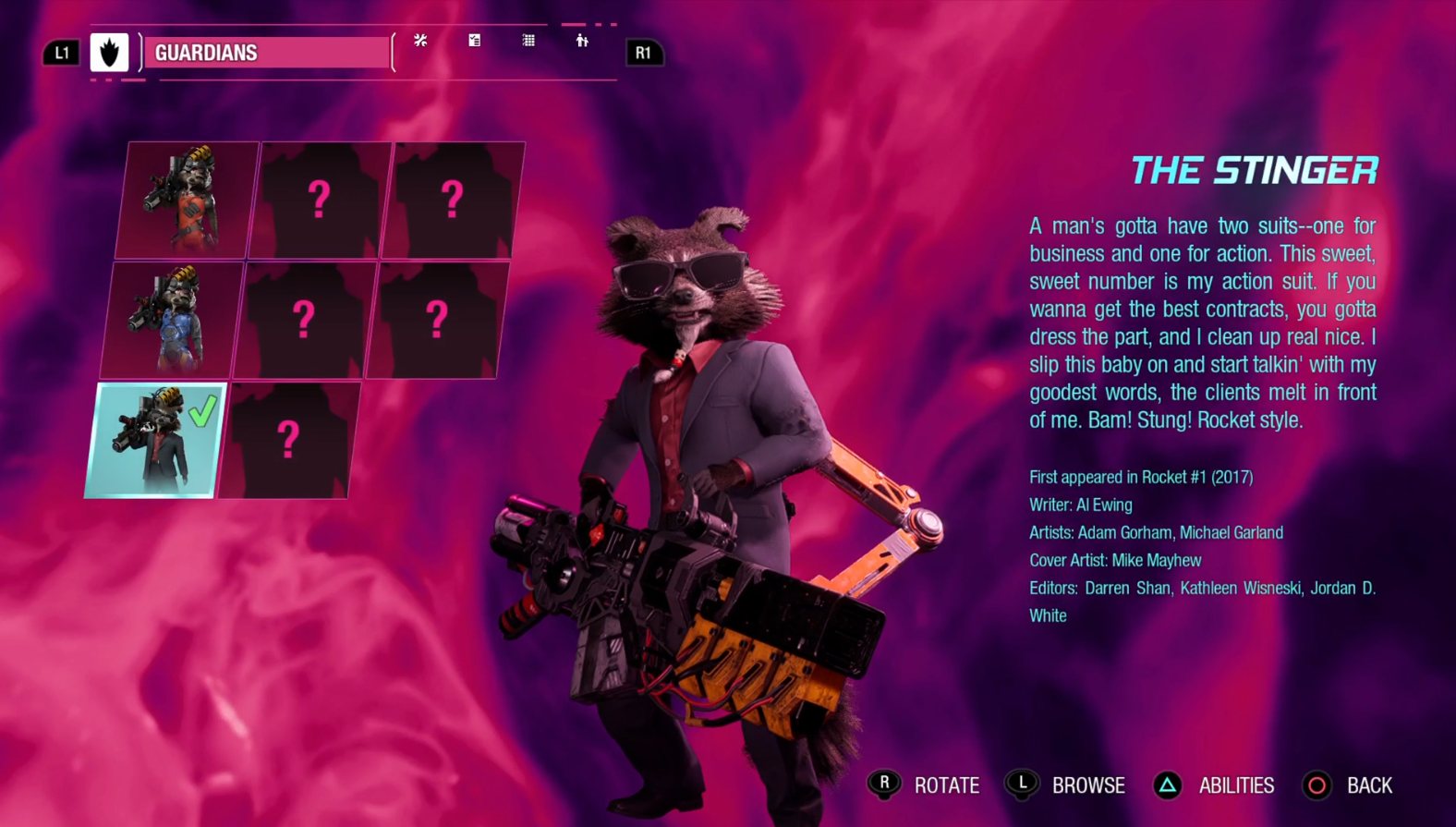 Once you’ve unlocked the Plasma Element for Star-Lord’s gun (during the Wendigo fight), you’ll come across a space full of alien plants. Over in the far right-hand corner of this space, you’ll find two plants close together. Burn these away and behind them is the costume box. 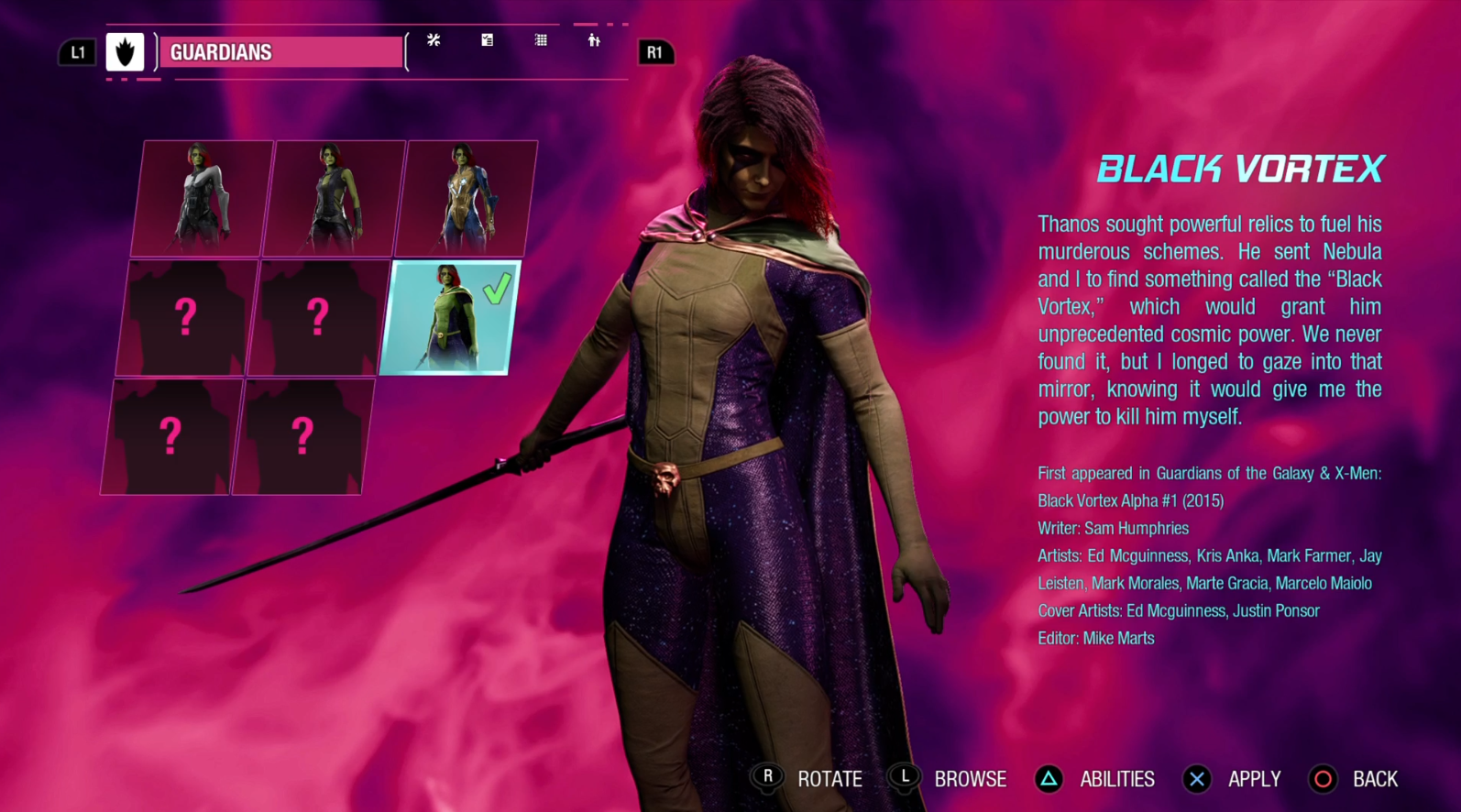 Later in the Chapter, you’ll find a flat surface where you can deploy Gamora to help propel you to a really high ledge. From that ledge, ljump across to the nearby adjacent ledge to get this outfit box.

Pass the snowy field of death plants later in the Chapter; you’ll come across a ramp with one of the same plants at its base. Go up the ramp towards the blue icy wall to find this outfit box.

Inside the wind tunnel, you’ll find an outfit box on the upper platform at the very end. To get the box, you need to reach the end using the wind element to raise the blockades to hide behind until the wind stops.

Once you reach the end, quickly jump up onto the raised platform on your left and pull up the blockade to avoid being blown away. When the win stops again, jump across to the other platform to get the box.

This box is at the point in the Chapter where you’re travelling through the central portion of the ship. After beating some robots and going back outside you’ll cross a Groot root bridge. You’ll then come across a path to the right, which has an ice wall. Melt the wall using the plasma shot, go through, and then jump up the platforms to the very top; the outfit box is there.

When traversing the mines you come to an area where you need to freeze a geyser to cross a gap. To the left of this are more geysers; freeze them.

Then ump across them, and squeeze through the small gap. You’ll come to a space with a lot of components to collect and the outfit box on the far right.

The Rest Of The Outfits

When you finish the game, the following outfits will be unlocked.

Electronic Arts and Maxis have revealed The Sims 4 Modern Menswear Kit, the newest fashion kit for players to expand their Simsâ€™ style and flex...

Feature
Happy Friday! Here's A No Straights Road Video To Lighten Up The Mood

With news of COVID-19 infecting more people in Malaysia, our country is in a bit of a pickle. So let's escape and look forward to the weekend. Here...

Want a taste of an intro to a pixel art boss rush game? Well, here's the intro to Eldest Souls, a new game from indie publisher United Label. The a...