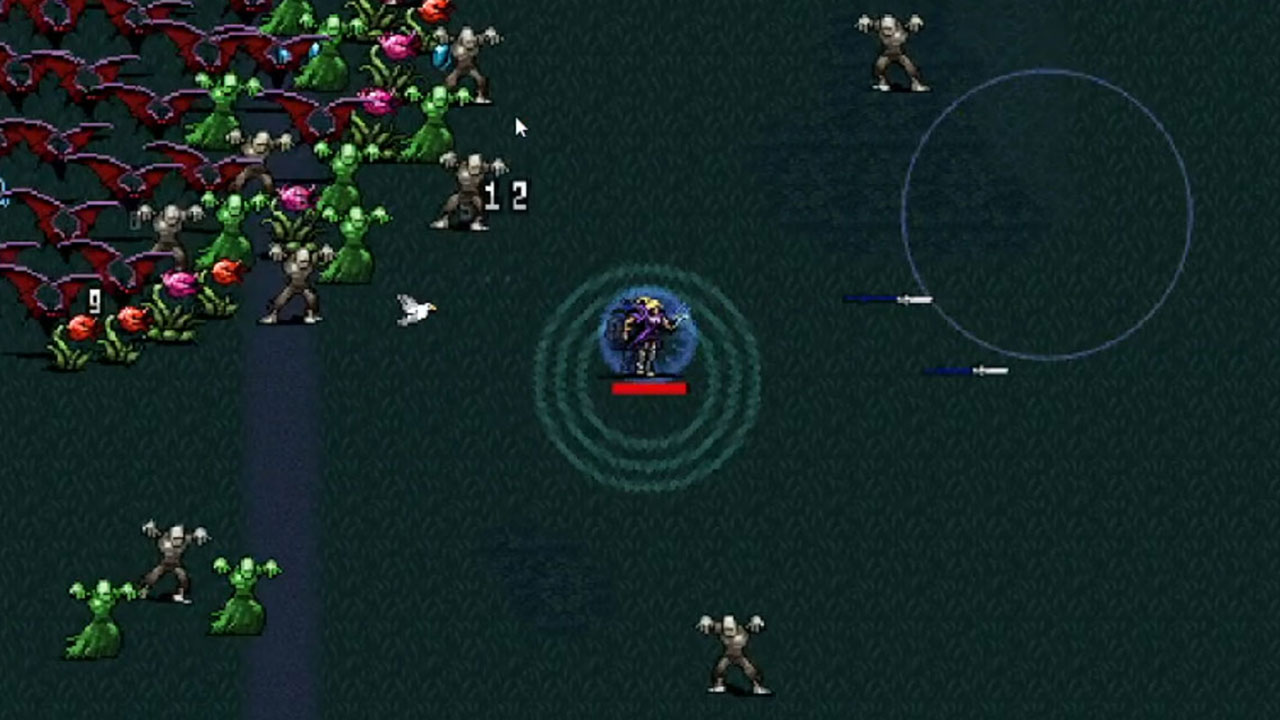 Vampire Survivors is out now; it’s clearly an homage to Konami’s Castlevania but it’s a top-down 2D action roguelike gameplay. You’re dumped in an open field and have to survive as long as possible against hordes of bats, skeletons, and zombies. You level up and gain weapons and buffs to prolong your survival. Yes, you will eventually die, but you willÂ  unlock a good number of powerups along the way.

Here are some tips and tricks to get you surviving beyond 10 minutes; maybe even 30! Note that Vampire Survivors is in Early Access, so the game and mechanics might change in the final release.

There Are Weapon Upgrades That Require Specific Items

That basic whip you have? You can have an evolved version called Bloody Tear by getting a Hollow Heart and having your basic whip be at Level 8. Likewise, you can evolve a Holy Wand by getting an Empty Tome, or evolve a Knife by getting a Bracer.

To get evolved weapons, you need to open chests that drop from rare boss enemies; you can tell that they’re bosses by their size. So to recap, focus on leveling up your weapon to level 8, get the corresponding equipment pairing, and then open a treasure chest dropped from a rare enemy. Here’s the full list of weapon combos:

When you level up via blue crystal collecting, you get your choice of three items. Prioritize the following to stand a chance at surviving beyond 10 minutes:

Whip: Great basic attack to have since it has good range and is reliable in its cooldown and attack cycle.

Clock Lancet: Shoots a beam of light, with each ray coming out in a clockwork fashion around the main character regardless of where he/she is facing.

Knife: Fast projectile that fires at the direction you’re facing. The higher the level, the more you fling. Can “target” enemies if they’re in front of you, so this item is a crucial pick if you want to clear mobs in front of you quick. Also, make sure to the the Bracer for the Thousand Arms upgrade.

Laurel: Shields from damage when active. More protection for your character.

Wings: Extra movement speed by 10%. It’s always good to have this buff so that you can always lead enemies to where you want them to go.

Garlic: Damages nearby enemies if they get too close. Some extra protection never hurts.

Axe: Works great with Candelabra combo to get the evolved Axe.

Cross: Works great when you have the Clover item to get the evolved Cross.

Death Dracula Does Appear & Can One-Hit Kill You

If you stay on the map long enough, about 30 minutes, Death Dracula will appear. Avoid him, as one touch from him will end your run. Take note that he can be frozen with the Clock Lancet, you can take an extra hit if you are wearing the Laurel, and another Death Dracula will spawn one minute after the 30th.

In Vampire Survivor, you can pick among a stable of adventurers and spellcasters before you start your run. Each of them have their own starting weapons and passives. Here’s the list:

The best character to start with and get the hang of.

Starting weapon: Knife
Passive: Permanent +1 projectile (all weapons).
How To Get: Costs 1,000 gold.

Starting weapon: Knife
Passive: Permanent +1 projectile (all weapons).
How To Get: Defeat a total of 3,000 skeletons to unlock Mortaccia.

Starting Weapon: Garlic
Passive: Permanent +25% pickup radius and +30 max health.
How To Get: Get your Garlic to level 7 to unlock Poe.

When you’re doing great with Vampire Survivors, use this Alucard proxy instead. His weapon cooldown skills can help immensely.

Fall Guys Is Getting A Godzilla Costume