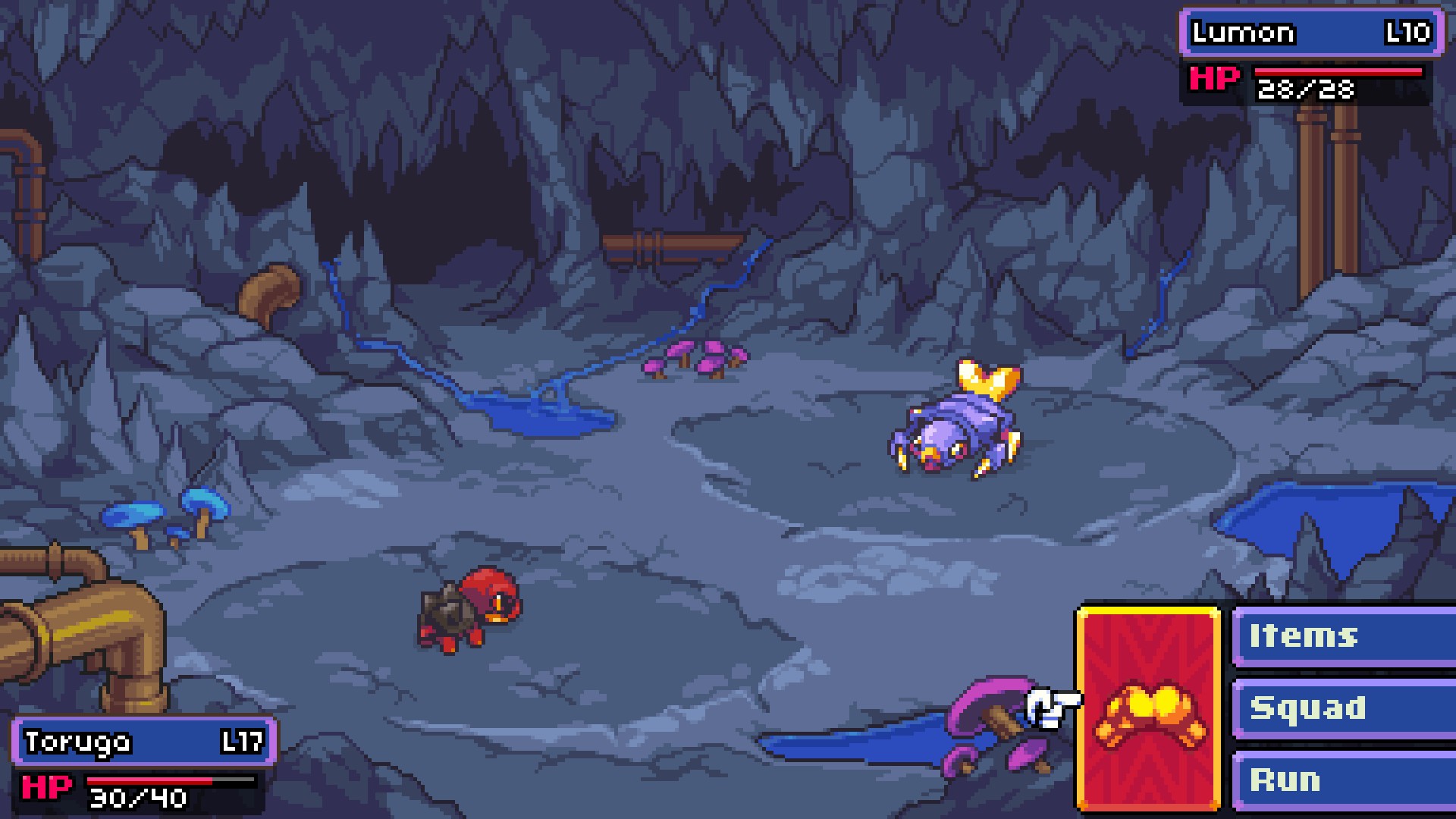 Many long-time Pokémon fans (including me) may have fallen off the franchise’s bandwagon over the years, especially after it transitioned to full 3D. If you’re feeling nostalgic for the retro days of classic Pokémon, TRAGsoft’s Coromon will bring you back to the days of your childhood, but with modern-day improvements and whatnot.

Just like Pokémon, Coromon is a JRPG where you catch monsters, train them and use them in battle. It’s a lot of familiar elements, like Coromon hiding in tall grass but randomly encountered in caves and dungeons. However, there are also elements that distinguish Coromon from Pokémon. Sure, the core of the game is still capturing Coromon, training them and yes, even evolving them to stronger versions with new names and designs. There will be over 120 different Coromon in the full game, so there are a variety of creatures to catch and train.

In Coromon, you’re not a trainer, you’re a Battle Researcher, and you catch Coromon using Spinners (the game’s equivalent of Poke Balls). You just joined an organization called Lux Solis, and you’re tasked with investigating the Titans as part of the Titan Taskforce. One of the biggest mechanics in the game is the epic boss battles. There are six Titans in the entire game. Instead of gym battles, you’ll have to fight through a dungeon with Battle Researchers to fight and puzzles to solve. At the end of these dungeons, you’ll fight a Titan, which is closer to a conventional huge JRPG boss battle but still in a Pokémon turn-based style.

You even fight weird mini bosses like a freaking fusebox. I’m not kidding. This game surprises you in all the best ways.

Yeah, Coromon features more mechanics you’d find in other JRPGs, like quest logs where you can keep track of both the main quest and side quests, as well as an item called the Gauntlet, which can be outfitted with a variety of different functions. One of the first functions you’ll get with the Gauntlet is to use it to make a patch of grass safe from Coromon encounters for a few minutes, while another allows you to push logs, stones and other obstacles out of the way.

Unlike Pokémon, Coromon also features multiple save slots (and the ability to auto-save) so you don’t have to worry about losing your current playthrough if you want to start a brand new journey. It was only recently that 2019’s Pokémon Sword And Shield finally added autosave, but Pokemon has yet to introduce multiple saves.

In addition, there are other quality-of-life features like how you can get the option to teleport from city to city from the second city onwards if you complete a side quest. That’s pretty early on compared to a Pokémon game, where you’ll only get the Fly ability more halfway through the game. Oh, and you can also get Coromon’s equivalent of Pokémon‘s EXP Share early on as well (via a side quest), which is something that makes training your Coromon easier and faster. There’s also a mechanic where you can improve specific stats for a Coromon every time a separate meter gets full, which give you more control in how you grow your Coromon.

I Wanna Be The Very Best

If you miss the retro graphics and style of the classic Pokémon games, I definitely recommend that you should check out Coromon. It’s clear that the developers at TRAGsoft has injected a lot of time and effort into this game, which is evident from the attention to detail in many aspects. That includes the animation and sounds of the many Coromon creatures you’ll find in the game and charming stuff like using animated emojis to convey the emotions of characters in the game.

The only gripe with the game is that some Pokémon players might find that the game is too familiar. I mean, most of it plays just like Pokémon, with similar mechanics but different names. Many of the Coromon creatures might also look derivative if you’re used to Pokémon designs. Even so, the game is still worth trying. Coromon is not a ripoff of Pokémon, and if you give it a chance, you’ll enjoy the game.

Review copy provided by Freedom Games. Played on PC via Steam. Coromon releases for Nintendo Switch and PC on 31 March 2022.

Eiyuden Chronicle: Rising Guide - How To Get The Most Out Of Your Town

by Coromon Makes You Feel Like A Kid On His Gameboy Again - KAKUCHOPUREI.COM - Pokémon News in March 31, 2022
Reply