Ghostwire Tokyo was one of the breakout surprises of E3 2019. Ikumi Nakamura became a viral sensation and Shinji Mikami of Resident Evil fame is involved (he founded Ghostwire Tokyo developer Tango Gameworks). Plus, the trailers have been teasing a unique game with fresh and innovative gameplay.

Unfortunately, the whole experience is pretty much just Far Cry with magic. 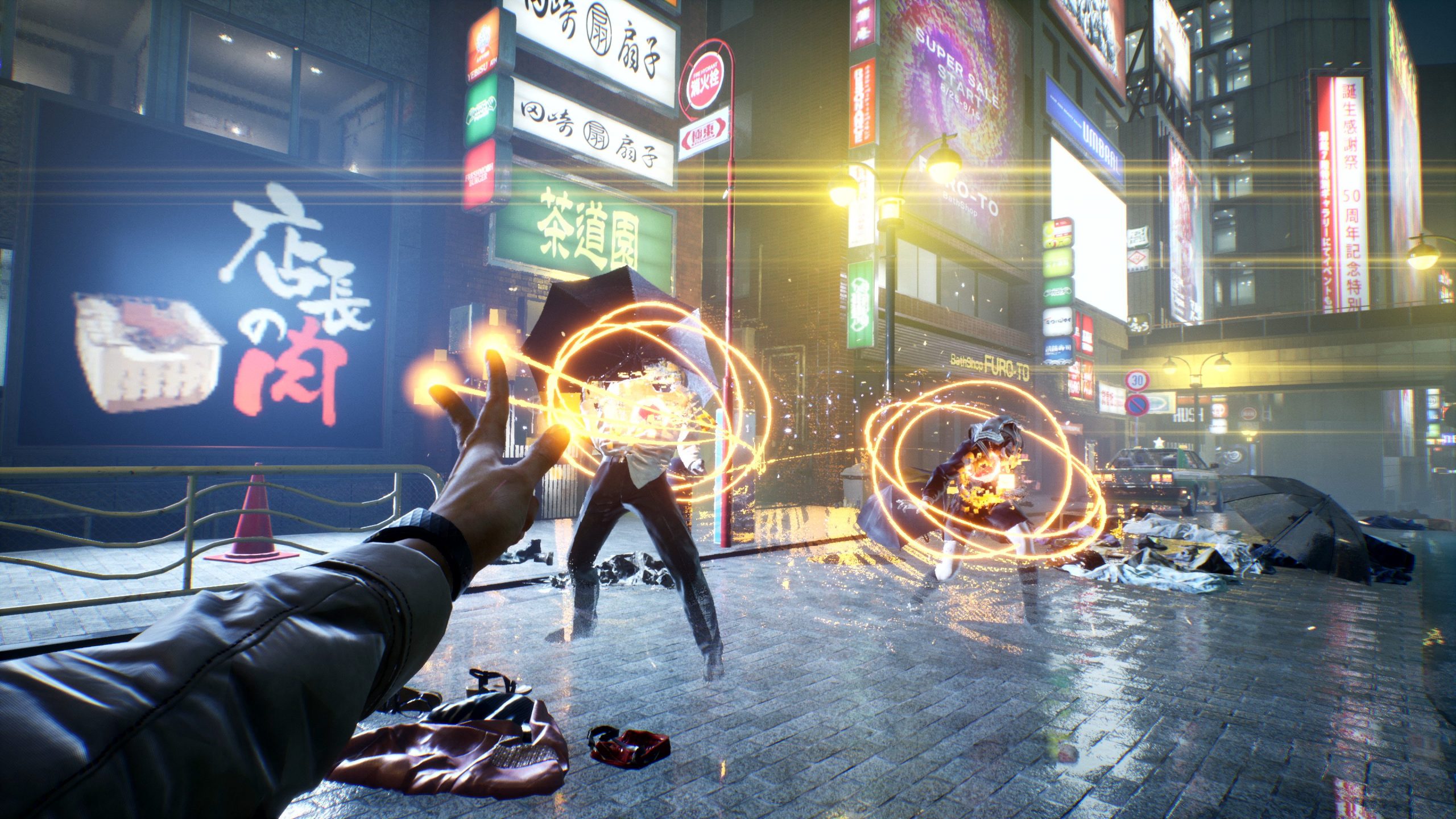 Ghostwire Tokyo is set in a, well, Tokyo where everyone has disappeared; only ghosts, yokai, doggos and kitties are roaming the empty city. There aren’t many positives in this game, but one is that the game doesn’t bother to waste time on a slow set-up in the beginning. The game’s protagonist, Akito, wakes up in the middle of Shibuya with a voice of a spirit named KK in his head and magical powers. He immediately gets attacked by Visitors (what the enemies in the game are referred to, probably to distinguish them from the normal Japanese yokai) and thus begins the game’s combat tutorial.

While the game is an open-world title, it doesn’t overwhelm players with a massive area from the very start. You start with a small area, and that area will get bigger as you cleanse Torii Gates (the game’s version of towers). You literally can’t venture too far, because most of Tokyo is enveloped in a fog that will kill you, until you clear them by cleansing the Torii Gates.

Ghostwire Tokyo relies on a lot of tired conventional open-world tropes, essentially following the Ubisoft template. The aforementioned Torii Gates are basically the same things in other open-world games you’ll need to complete in order to unlock more of the map. The main mechanic of the game is the worst offender of this, as you’ll need to collect spirits from all over Tokyo in order to save them. You do this by absorbing them with a resource called Katashiro Paper, but they’re finite. Once you absorb 10 spirits with your 10 Katashiro Paper, you’ll need to find a payphone stall to turn these spirits into XP and meiko, which is basically the main currency in the game.

It becomes tedious as heck because you can’t go a few seconds or a few minutes in the game’s open world without encountering a spirit (they’re literally in every corner and on many buildings). Then, once your Katashiro Paper is fully used, you’ll have to stop what you’re doing, find a payphone and sit through the same animation sequence every single time.

All this becomes an annoying chore, especially when there are so many spirits, and when they’re your main source of XP and money. 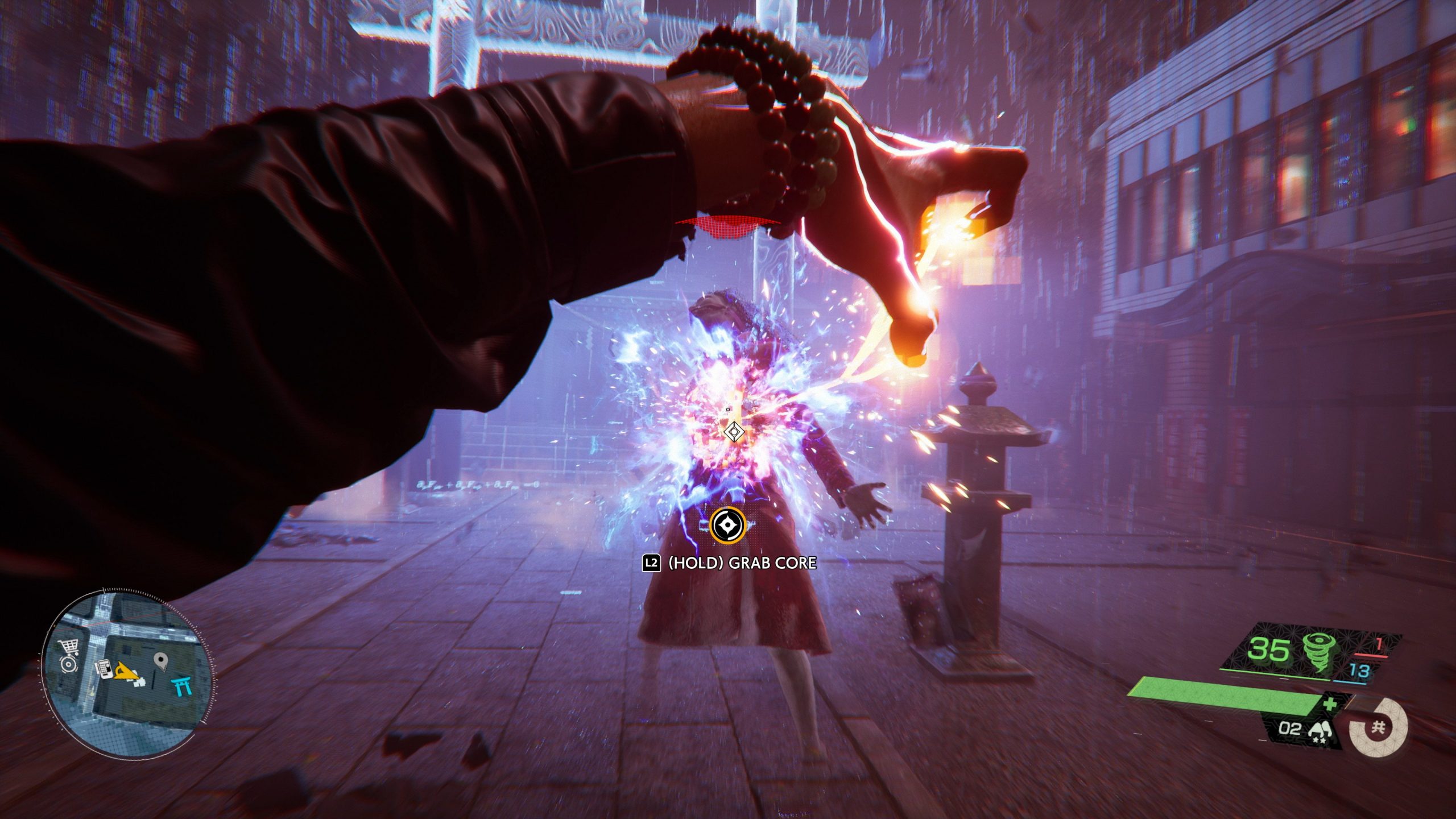 Another trope is that the game has a lot of collectibles to find. You’ll probably miss many of these if you don’t press the square button every few seconds to activate your special Spectral Vision, which scans the environment and highlights interact-able objects. The world is cluttered with so much stuff that you’ll need the vision to find the things you want to find.

Oh, and don’t get me started on the stealth. This game is marketed as an action game, but the developers still added stealth. However, the stealth mechanics are extremely simplistic. The game’s environments often aren’t made for stealth gameplay to work well, and the line of sight for enemies can be wonky. Plus, the button for stealth kills is the same button to zoom and do another important mechanic, ripping the cores of your enemies.

The trailers for the game has made a lot of players intrigued because they made the gameplay look mysterious and unique. After 16 hours with the game, I can tell you that the biggest problem with the game is that the combat never really evolves beyond what is shown.

The way you play in the beginning is the same as how you’ll play at the end. Ghostwire Tokyo feels like a shooter, but replace the guns with magic finger attacks. All magical attacks use the same exact button, R2. The ONLY variation is that you can charge them for more powerful attacks. If I’m making it sound too simple, that’s because it really is.

Oh, and the magic attacks? Not only is there only two moves (R2 and holding R2), there are ONLY three elements in the game. That’s right, three, and all the combat amounts to is essentially spamming R2 these three magic elements. Sure, certain enemies can be resistant to one element or weak to another, but there’s no spice to the combat.

The only silver lining is how cool the combat looks, especially the finger gestures and animations. However, when all you’re doing is spamming R2 with the same three magic elements, it can get old really fast. I was expecting some cool combos or combinations to perform with the magic attacks but there were none. Here’s the cycle of almost every combat encounter: spam magic attacks, enemies get weak, rip out their cores by holding L2, occasional parry or melee attacks to replenish ammo, rinse and repeat.

The PS5’s DualSense controller’s Haptic Feedback makes it all feel electrifyingly satisfying but that doesn’t help spice up the combat when it’s only skin-deep. Thankfully, one of the things that the game does well is traversing the city. Akito can glide for a few seconds, and grapple hook flying Tengu to reach the rooftops of buildings. Tokyo is beautifully realised and atmospheric, and you’ll be doing a lot of indoor exploring as well, inside apartments, offices, houses, and more. Kudos to Tango Gameworks for their attention to detail, not only with the environmental assets but also the easter eggs and references.

fantastic Yokai And Where To Find Them 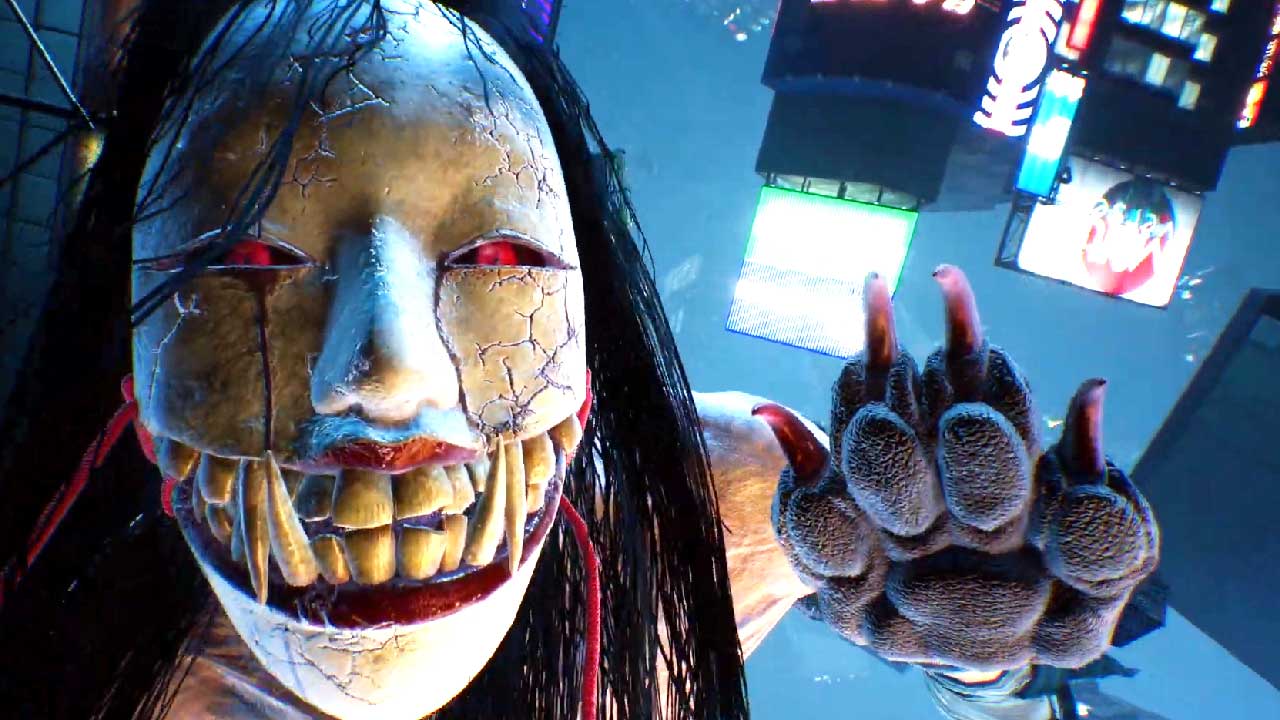 Ghostwire Tokyo is not a horror game, but it does have horror elements, so if you’re a horror fan or a fan of Japanese mythology/legends, you’ll be happy for sure. The game has an extensive list of yokai to meet and collectibles that will make you grin or chuckle, like a cursed videotape (a reference to Ringu). It’s fun delving into the game’s lore and the side quests, which can be amusing or fascinating. One side quest even had me having to give toilet paper to a spirit shitting in a public toilet. There’s also a Fallout 4 easter egg in there, so other games are not exempt.

Despite being an open-world game, it only took me around 16 hours to finish the game, and that’s with completing a healthy bunch of side quests, as well as unlocking/cleansing almost all the Torii Gates on the map. There are only six chapters in the game’s story, and each subsequent chapter is shorter than the last. Chapter five and six were really just cutscenes, ‘walking simulator’ gameplay sequences and boss battles, which made the game’s endgame feel rushed and somewhat incomplete. It was also suspicious when the cinematic cutscenes in the last chapter of the game resorted to pre-rendered cutscenes, which I realised because my Akito went back to wearing his default early game clothes when I’ve already decked him out in a ninja costume (yes, you can customise Akito’s clothing).

In a world that’s already saturated with open-world games, it’s disappointing that Ghostwire Tokyo doesn’t do much to distinguish itself and instead relies on tired tropes. Add simplistic combat and annoying mechanics to that mix, and the game doesn’t have much to stand on. The only saving graces are the flashy visuals and aesthetics, as well as attention to detail in other areas such as environments and creepy monster designs.

Ghostwire Tokyo is disappointing because it has the potential to be so much more. Instead, it’s just an average by-the-numbers open-world game, but with magic and yokai.

Reviews
Kingdom Hearts Melody Of Memory Will Break Your Heart

CD Projekt Red gave selected members of the press access to the Cyberpunk 2077 demo at E3 2019 behind closed doors. Unfortunately, it wasn't revealed ...

Netflixâ€™s The Witcher is now one of the most popular TV shows in the world. The streaming giant already renewed the series for a second season,...