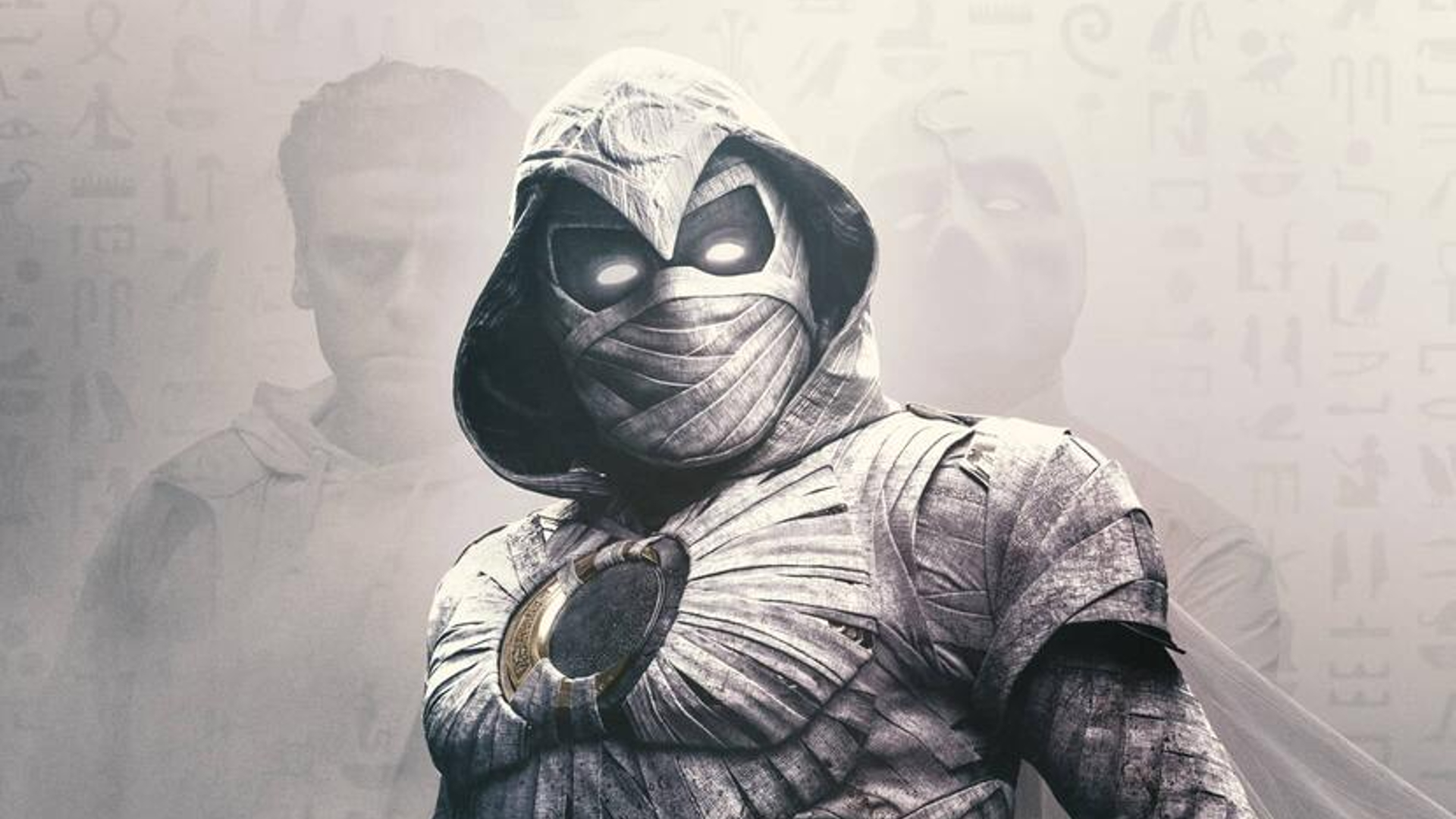 Moon Knight follows Steven Grant, a mild-mannered gift-shop employee, who becomes plagued with blackouts and memories of another life. Steven discovers he has dissociative identity disorder and shares a body with mercenary Marc Spector. As Steven/Marc’s enemies converge upon them, they must navigate their complex identities while thrust into a deadly mystery among the powerful gods of Egypt.

Courtesy of Disney+ Hotstar Malaysia, we were recently lucky enough to interview Moon Knight directors Justin Benson and Aaron Moorhead on working with Oscar Isaac and F. Murray Abraham (the voice of Khonshu), as well as the Moon Knight costume, and more. The directing duo directed two episodes of the series (Episode Two and Episode Four). This interview has been edited for clarity.

How did you make sure that Oscar Isaac’s performance as the two characters (Steven Grant and Marc Spector) would feel authentic and not just switching between accents?

Justin Benson: I heard a great actor once say; “If I’m getting too much feedback from the director, they’d cast someone else. If I’m getting none, I’m freaked out.” With every performer, you try to find that thing. With Oscar specifically, he’s such a perfectionist. He is so unbelievably prepared that you’re really just there to give him feedback on the various options he has brought you on the day, and to help hone in on what exactly is the best of those options, if that makes sense. He’s one of our greatest actors and he certainly doesn’t need something whispered in his ear to do a great role.

Aaron Moorhead: I think the thing that we were trying to figure out is if he was struggling with playing Marc, for example. I think our biggest contribution is trying to dig out vulnerability, in scenes where it could come across as irritability, something like that. But really, Oscar is the author of those characters. Him and Jeremy Slater, the writer. So, so much of it is complex beyond our own actual comprehension of the character, to be totally honest with you.

Can you tell us more about the relationship between Steven and Marc?

Justin Benson: It’s an interesting question. We made a movie in 2017 called The Endless and it dealt with fraternal relationships, brotherhood, with all of these things. Having spent a huge chunk of our lives exploring that relationship, we did see some similarities between that and Marc and Steven’s relationship with himself. I think at times we felt like paternal aspects coming into their relationship, even though ultimately, obviously, it’s about coming to peace about oneself and the many forms one takes.

Aaron Moorhead: There’s kind of an easy temptation to make it purely antagonistic, where they just want completely different things at any given moment. But it didn’t really work for us, it was ringing bells of falsehood, a lack of humanity and vulnerability. A lot of the time, what Oscar and the two of us and Mohamed (Diab) were trying to do was make sure that there’s always a pathos underneath their entire relationship. There’s ultimately some kind of deep-rooted respect, you just have to figure out exactly where it comes from.

What was it like with Oscar Isaac and Ethan Hawke playing off each other?

Justin Benson: Watching Ethan Hawke and Oscar Isaac in a scene together is essentially watching two of the greatest actors of our lifetimes interacting with each other and seeing what kind of alchemy results. That’s very exciting to get to set and look at that but what is just as exciting is sitting in the room with the two of them and just talking about the broader philosophical implications of each of their characters, of them finding the humanity in those characters, especially Ethan finding the humanity in a villain.

There was so much to be learned from those conversations and also something so special that that we were empowered to contribute to their process in some way, and they would actually listen to us and internalized what we say to any extent, was a pretty profound experience to have.

Can we expect horror elements from Moon Knight similar to your previous works?

Aaron Moorhead: I think if you’ve seen any of our independent films, there’s a very specific tone and a very specific genre that it rides. We feel like the phone ranged to be able to work on Moon Knight because of that tone, because of the way that they feel, because of the focus on character, they’re darker, they have complicated human beings in it, and of course, these complicated human beings dealing with this gigantic fantastical thing that’s happening to them.

Obviously, we’re working in the Marvel universe. It is its own universe, it has its own specific tone. But you know, Moon Knight is beholden to no one. He does not have to fit in the Avengers or anything like that, and so we were able to do our own thing with it.

Also, by the way, we directed episodes two and four, we worked with Mohamed (Diab), another director, and we tried to give it its own tone. That wasn’t just something we imported from our own films, so that Moon Knight can forever be its own thing.

What were your cinematic inspirations?

Justin Benson: We’re always trying to create content where no one would detect what our inspirations were. It’s like the opposite of doing a homage. Yeah, we’ll talk internally about what it was and not tell anybody.

Aaron Moorhead: You know what’s funny? A lot of the visual language and the editing language and the rhythm was to find Children Of Men and No Country For Old Men. These are whole, like great movies, that we worry to compare ourselves to the greats. The greatest of the greats. But we can tell you we are also fans of great movies. So, we do watch them and try to emulate why these movies are entertaining to watch and also seem to have a deeper thematic resonance.

The movie doesn’t end when you go, “Oh? Cool movie. I enjoyed it for two hours.” The story’s not over. Your brain’s still working on it. You’re going to bed and you’re like, that movie, what was it about that. You know, we really tried to bring things like he (Justin Benson) just mentioned.

Justin Benson: There’s a lot of discussion about David Lean and especially being in the Jordanian desert, where Lawrence Of Arabia was shot. I don’t know if this is an inspiration, but my parents met at a double feature of Lawrence Of Arabia and Doctor Zhivago, so I’ll just be at the desert thinking, “Oh, I wouldn’t exist without this desert”.

Aaron Moorhead: And David Lean. You know, just on a simpler broad aesthetic levels, we looked for movies with dualities like Persona or Reflections, lots and lots of Reflections. See how people presented the desert before we did, see if we wanted to steal or steer away from it in that way.

For the costume, how much of it was CGI and how much was Oscar Isaac actually wearing physically?

Aaron Moorhead: 47 percent (laughs). You know, it’s funny about those costumes, one is that they go through so much, very careful, almost like every thread is looked at. Our costume designer, Megan, was an incredible asset, talking about exactly how they would react to the light and how many doubles you’d need, because you’ll be tumbling around and it’s white, and you’re gonna get in the mud and you can’t clean it that fast.

Also, what’s kind of wonderful about Marvel stuff is that they’re wearing hoods a lot of the time and stuff that covers their face, which means that you can have a stuntperson do, you know (laughs).

Justin Benson: You can, but really, Oscar Isaac, I mean. If someone was going to backflip off a cathedral and throw off a crescent. If that happened, I’m just saying, it may have been Oscar.

Did you shoot Moon Knight as one six-hour film or an episodic TV series?

Aaron Moorhead: It’s funny, because calling it TV would not be accurate, and calling it a six-hour movie wouldn’t quite be accurate either. I guess what it really is for us is there is a singular story, which hinges on one thing, the problem of Steven Grant and Marc Spector, what they’re having, and the emotional beats one would have to go through to resolve that in a real mental health way or just an emotional way as a human being, are the hallmarks of where we put our beats in the episodes.

Now, we were only responsible for episode two and four, so this is something I’m kind of speaking out of turn for Mohamed’s episodes and Jeremy Slater’s writing and all of that, but it was really about telling one singular story while also making sure that the episode breaks weren’t just at these random times. They all have their own flavour to it, it’s not quite a bottle episode where you could just eject it and it’d still have the same story. They each have this wonderful little personality to them. For us, that’s episodes four and five. We did four, Mohamed (Diab) did five. Five is one of my favourite episodes of TV ever, and we’re also really proud to have done episode four. It doesn’t exist exactly on its own, so it’s not quite an episode of TV, and yet it’s so completely different from the other five episodes.

What was it like working with F. Murray Abraham (the voice of Khonshu) and was he ever on set while filming?

Justin Benson: It’s interesting. We actually can’t answer if he was on set, because he could have been without us knowing. But we can say in the capacity of working with him, it was just an honour to work with the star of Amadeus and one of the greatest living actors. To finally see Khonshu brought to life in that way, it felt like Khonshu was always supposed to be him.

It takes time to land on what it is, obviously, but it literally couldn’t be anybody else. It was fun to watch that alchemy happen.

Aaron Moorhead: It was really tough when you have a legendary character like Khonshu and a legendary actor like F. Murray Abraham, who also by the way has a legendary voice, right? I mean, you can recognise his voice like that, and to be able to bring that together, he completely changed the character all at once. Went from something that could have been a domineering, sneering evil sort of thing to something that has a bit of a paternal, thoughtful caring nature while also having that wonderful gravitas, that deep rumble. Yeah, I was smiling the whole time we got work with him.

Moon Knight premieres on Disney+ Hotstar on 30 March, and will comprise of six episodes. Stay tuned for our review and more coverage of the series.

You Can Pre-Load Genshin Impact This Weekend

by Moon Knight Production Designer Reveals That The Set At The End Of Episode 4 Was 100 Percent Physical (EXCLUSIVE) in April 23, 2022
Reply

[…] also check out my other interview with Moon Knight directors Justin Benson and Aaron Moorhead by heading over here. Check out my breakdown of Moon Knight Episode 1, Episode 2, Episode 3 and Episode 4 here. This […]

[…] also check out my other interview with Moon Knight directors Justin Benson and Aaron Moorhead by heading over here. Check out my breakdown of Moon Knight Episode 1, Episode 2, Episode 3 and Episode 4 here. This […]