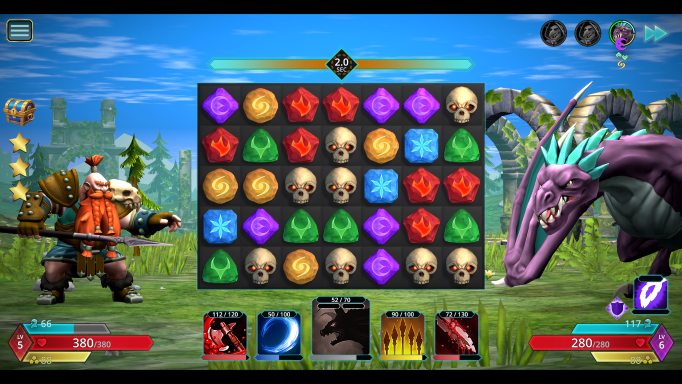 Iâ€™m not the biggest fan of match three games, but I have played a lot of them throughout my life thanks to a lot of older relatives that needed me to carry them through tough levels. With that said, itâ€™s not something Iâ€™d voluntarily pick up during my free time and I wasnâ€™t expecting much when given this assignment. But I was surprised to find that Puzzle Quest 3 has made something genuinely worthwhile from a genre I never really respected.

First off, what exactly is Puzzle Quest 3? Imagine a turn-based RPG had you play Candy Crush between turns and your mana management was dependent on how well you do. Thatâ€™s Puzzle Quest 3 in a nutshell.

The gameâ€™s core gameplay loop can be condensed into these two things: Match three gems of the same colour, fill up bars so you can use your abilities. Pretty simple premise but there are a ton of deeper mechanics at play that enhance the gameplay for a dangerously addictive experience.

Turn-based RPGs arenâ€™t really my cup of tea personally, due to not being able to do anything for about half of the time. However, Puzzle Quest 3 fills in that gap with a pretty fun activity. Gems correspond to a specific element like red for fire, blue for ice, etc, and matching three gems of the same colour will cause them to burst while freeing up space for further combinations, you get the gist. Your characterâ€™s abilities are also colour coded and completing a combination fills up a bar for an ability with a corresponding colour, which you can unleash once itâ€™s filled up.

Matching four or five or even a whole row is where things get interesting as bigger combos create a special gem with a number on it, with it increasing based on additional gems from a simple three gem combo. Four gem combos create a 1 numbered gem, up to 5 with bigger combos and once you bank in that special gem in another combo it turns into a multiplier that nets you extra mana. This can fill up your meters lightning-quick, sometimes even instantly which lets you play even more aggressively based on how well you do. Completing a whole row stuns your enemy, letting you get a free round which is essential for boss fights. The higher the combos and the more frequent per turn, the more stars you get at the end which determines how rare a chest you get.

Skull gems on the other hand are responsible for basic attacks and are a great way to deal quick damage or whittle down your enemies shields and defenses. Lining up gems itself is very approachable as there is no rush to finish your turn so you can scan the screen and plan out your moves beforehand. Youâ€™ll need to complete them in a two-second timer though that gets extended slightly with each combo you complete, which is a really neat feature as quick-handed players can pull off some insane plays potentially.

With that said, a few hours of the game is enough to see what it has to offer as there’s not much else to see.

Fellowship of the Bling

The game has you pick from five different heroes, the Assassin, Berserker, Necromancer, a minotaur Paladin and the Shaman, with gender choices for each character. Each of these heroes has a mastery of two elements, meaning that most of their abilities rely on specific colours which are where different playstyles come into the picture. I spent the majority of my time using the Shaman, which focuses on green and yellow gems to deal poison damage and cast debuffs but spells in the game arenâ€™t just combat-based.

Most abilities alter your gem board like creating green gems on the screen or transmuting unwanted gems into those you do, which helps you snowball and have some sense of control over the randomness. Each character plays very differently, like the Berserker who uses red and blue gems along with a focus on skull gems for very high damage, bulldozing playstyle. His abilities rely heavily on skull gems, such as being able to clear a column with a skull on it, or clearing out a 3×3 area that deals 10% additional damage with each skull cleared.

New spells are unlockable with different colours, but each character has one ultimate ability that is unique to their playstyle. Ultâ€™s use a charge/ammo system that you can stockpile, and have unique characteristics such as turning red gems into bombs that explode, or creating special gems that give you a damage buff the more there are on screen.

Great Chest Ahead (Not)

The game will be F2P on launch which means one thing: microtransactions. I mean the whole game has a huge mobile game feel to it, with the many different sections in the shop, various different resources that you can pay with premium currency or real money. Youâ€™ll progress the game through new loot you find and upgrade your gear & spells using specific resources, which are only obtainable through chests from completing levels (aside from buying them in the shop), with varying levels of rarity from wooden chests up to diamond chests.

Thatâ€™s not where the scummy part happens as opening these chest require keys which are a very limited resource, and if you donâ€™t have any youâ€™ll either have to salvage them for gold, open them with gems (a special currency) or put them into one of your three slots which then need a minion to unlock it after a specific amount of time (30 mins to a whole 24 hours).

This causes problems as if you reach a new stage being underleveled with not enough resources to upgrade your loadout or your chests still not finished opening, thereâ€™s practically no way to move forward. Youâ€™ll either have to just play the skirmish mode which nets you little rewards or just stop playing until your chests open. Although it can be seen as a saving grace and your cue to take a break since the game can be very addictive.

Puzzle Quest 3 is a unique and refreshing experience in a genre that has long been stagnant and samey. It features a highly addictive and very fun gameplay, combining two things I donâ€™t like to create something I actually enjoy. However, it suffers from some severe microtransaction issues which I hope gets fixed or tweaked soon. For now, there’s no harm in trying out the game for free, but just mind the F2P.

This MMO App Will Help You With Your World of Warcraft: Shadowlands Questing

Green Man Gaming Is Having A Summer Sale; Buy One Game And Get Up To Five Free Games