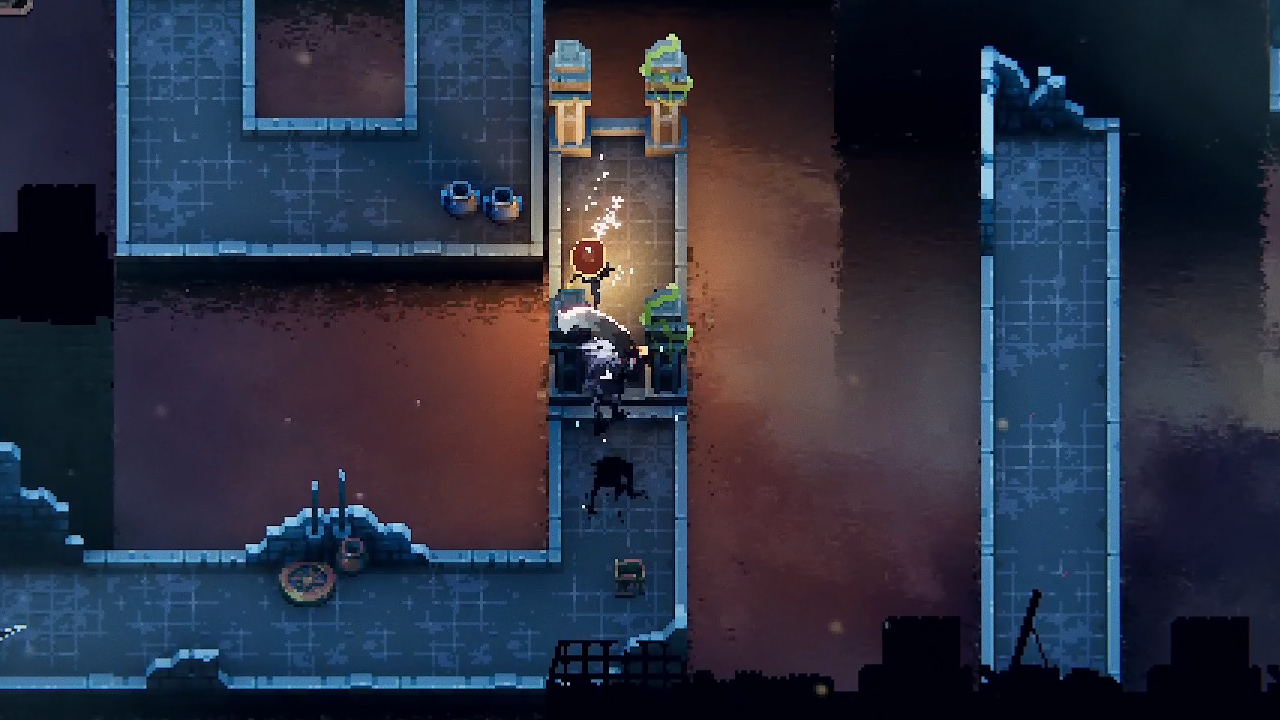 If you need a bit more puzzles to deal with in your next roguelike action RPG of choice, you may want to consider Loot River as your next choice. Developer Straka.Studio may have reinvigorated the indie random level “one death and you restart” hack-and-slash gameplay with the addition of moveable platforms and pieces.

In Loot River, you do all your fighting in top down 2D action glory. You slash, you melee, you dodge, and you can parry attacks while casting a few spells here and there. The kicker is that you need to traverse from platform to platform to get to the end of the level you’re in. You use the right analog stick to move the platform you’re on. These platforms come in a variety of shapes and sizes: t-blocks, 1×1 blocks, giant blocks with ascending/descending stairs, and a ton more. And yes, elevation does matter so you need to find correct platforms at times to cross the ones higher/lower than the current one you’re on.

You can take combat tactics and use them with the platforming moving and traversing mechanics; when there are too many enemy mobs to deal with on one platform, you can just go to an empty platform and run away. Of course, the game’s old city and ruin setting will screw you over at times with platforms can catch on fire, and platforms that get locked into place thanks to certain enemies, preventing your escape. Heck, certain enemies can push and pull all available platforms, which can either keep you away or pull you into a situation where a horde of exploding critters can easily overwhelm you.

Challenge-wise, Loot River gets pretty tough from the get-go. And in roguelike fashion, if you die at any time, you restart the run and have to do it all over again. But the more you explore Loot River’s creepy and gothic underground river-dominating world, the more you want to keep pressing on and getting through with at least a few good runs. Stage modifiers can be unlocked, making the next run either manageable or challenging depending on what you use. These can range from modifiers that give you an extra potion or a stage modifier that either adds a new boss or weakens existing ones.

There are a ton of paths and secrets to uncover, which would lead you to conclude that you need to finish the game in a specific pathway to get the true conclusion and escape the hellhole you’re stuck in. That’s the fun part about Loot River: discovering new techniques, weapons, and even new currency to unlock new weapons, armour, and spells to help you in your next run or so. There’s no way in heck you’ll get through the game in one run when you start: playing through the game and getting the hang of the platform-moving mechanics is key in prolonging your survival in each of your runs.

It’s a shame that parts of the game feel a bit unfinished, particular with some of the boss fights and enemy battles. Without going into spoilers, some of the bigger enemies “home” and “latch” onto you, some smaller enemies end up being invincible, but they can’t hurt you. And one of the bosses will keep doing the same attack if you go back and forth at a particular spot. Of course, you need to fight this boss fair and square to get the best run time, but there are a huge number of opportunities to cheese through the game. It also “helps” that the parry window is pretty generous even at the current base stat for your character, so you can parry enemies and deal big damage easily.

There’s also the elephant in the room to deal with: sometimes it can be hard to see what’s going on when the action gets too frenetic. Unless you’ve played through the game a huge number of times, it’s hard to see what animation your enemies get into for parrying and dodging purposes. And a huge number of platforms sometimes have debris that’s unnecessarily put there just to screw up your movement and dodging. I’ve lost plenty of times because I couldn’t dodge over debris that’s blocking my path away from a big enemy swing.

Loot River is a heckuva fun time if you don’t mind squinting your eyes every once in a while to see your player character doing his action RPG thing. The concept of moving platforms you’re on with the right analog stick while simultaneously attacking enemies on-screen, adjusting your positioning or even hightailing it when the action gets too hot, is overall exhilarating. With a few improvements and tweaks, as well as a way to enlarge some of the action, we could have a breakthrough roguelike addition that could go toe-to-toe with the likes of Hades.

Still, being second place isn’t so bad when you have a neat Tetris-like concept to play around with.

by New Xbox Game Pass Titles For May Include Loot River, Trek To Yomi, & More | KAKUCHOPUREI.COM in May 3, 2022
Reply

[…] Speaking of flood, Loot River is one such game, out right now for Xbox Game Pass and PC Game Pass. We had a blast with the roguelike Tetris-esque block-shifting game; check out our review to find out why. […]