If you were to tell me that Nintendo was to delve into the turn-based strategy genre using Mario and the Mushroom Kingdom gang back in 2017, I’d be skeptical about how it would turn out. Lo and behold, it worked thanks in part to its collaboration partner Ubisoft where the French game makers worked in its cute-yet-psychotic mascots the Rabbids into one charming-if-weird package. 2017’s Mario + Rabbids: Kingdom Battle was a nice breath of fresh air in a sea of Mario spin-offs, though it wasn’t perfect.

Leave it to this year’s sequel to expand upon the formula further while improving on the core bits that made it stand out: the turn-based tactical combat that’s basically like XCOM but with Nintendo and Ubisoft mascots duking it out. 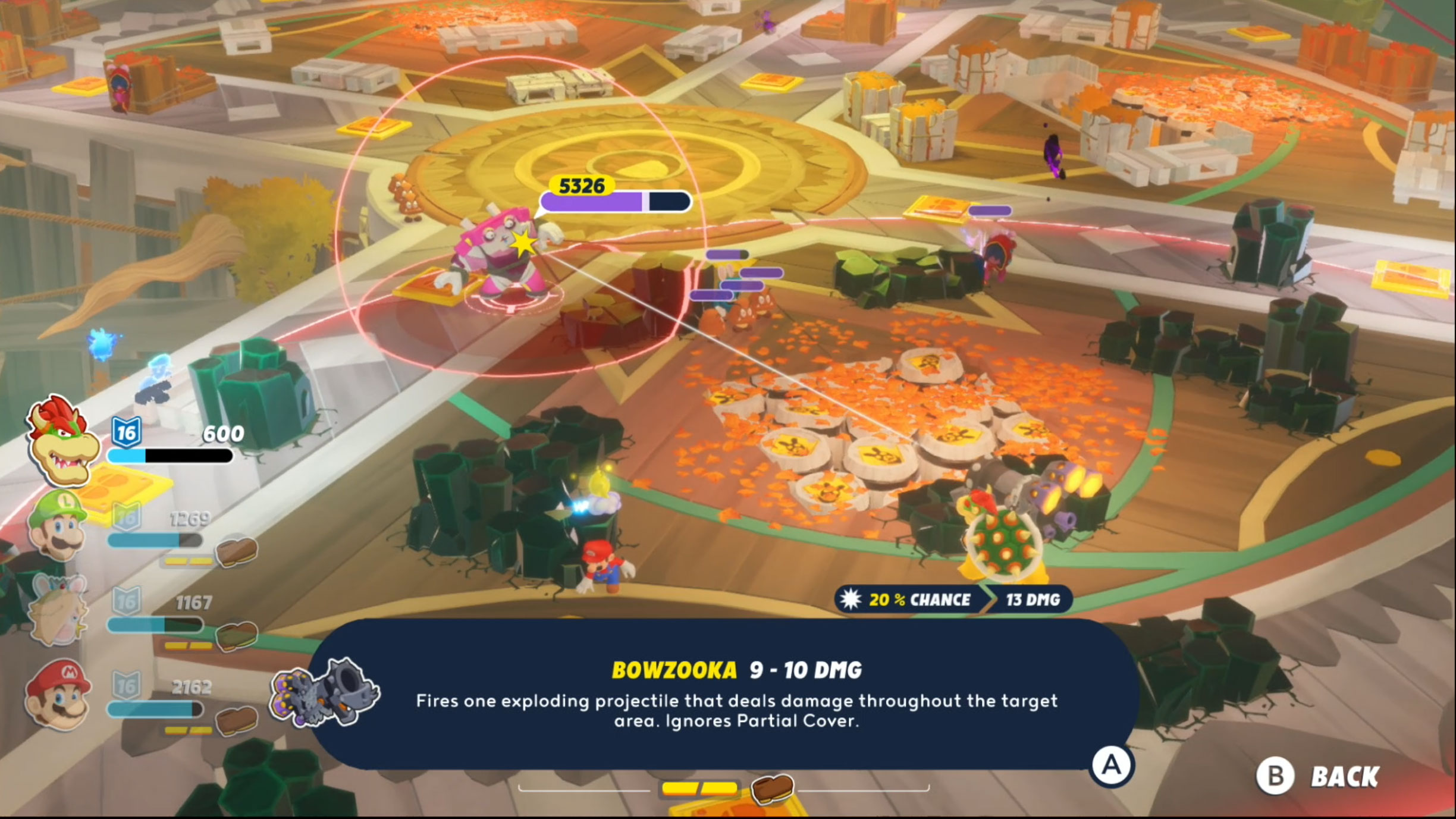 There is a plot to tie this all together -stop a sentient goo of evil from capturing Sparks (a combo of Lumas and Rabbids) by travelling to different planets ruled by different Rabbid deities & head honchos, all clearly themed after elements and staples from past Mario titles. But that clearly takes a backseat to the meat of the game: the turn-based combat and action with different objectives for you to conquer with your hit squad of Nintendo characters and cosplaying Rabbids.

As far as controls go, they’re spot-on perfect: there’s no need to fiddle around with grids as the cast of characters move just great with tons of flexibility, and the mapped default controls are intuitive and easy to figure out. As long as you remember the golden rule -you can’t move after you’ve taken a shot- you can do as many movement actions as you can. The new movement additions in this strategy game also mean you’ll have loads of avenues for combos and follow-up moves to deal with the opposition.

See enemies all clumped and need to do a melee slide to soften them up? Go ahead and do that, then take a shot from cover. Need to head to high ground? Move another unit closer to the area so that you can do a Team Jump to elevate yourself. You have up to two actions you can take, and they can be either casting buffs or just attack. 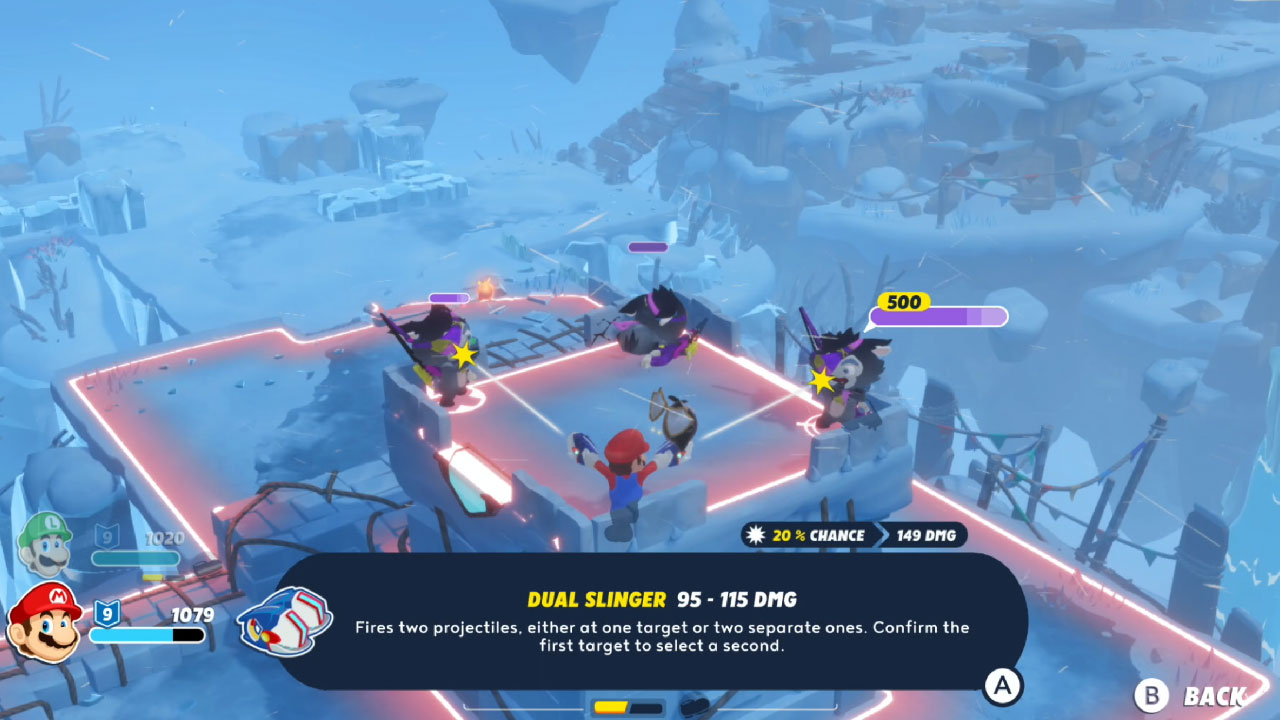 The game’s roster is also well-rounded, with no duds that deserve the backseat. Mario’s the all-rounder with the obligatory strategy game overwatch ability -shoot enemies within your range during their turn- and comes with dual pistols that can target up to two different foes for attacks. His brother Luigi excels in sniping, and is better at high ground and picking off foes one by one from afar.

Princess Peach can defend and packs a mean broomstick for close-quarter combat, while Rabbid Mario is the melee guy with good movement coverage and has a counterattack that hits anywhere as long as someone hits him. New Rabbid addition Edge has a multi-hitting sword he can throw to hit enemies within his line of sight. Rabbid Rosalina can cast Stasis to halt foes in an area for a few turns, letting you take a breather and reposition your team unfettered.

There’s a character for any particular playstyle, up to a party of three to take down whatever objectives are given to you. If you need to kill melee-based enemies that clump together, characters like Rabbid Mario can take them out in one go after a dash slide. Need to reach the finish line instead? Have a “tank” like Bowser to distract everyone in the vicinity, while faster characters like Mario can gain more ground. Big enemies dealing too much damage and are bullet sponges? Have Rabbid Rosalina and Rabbid Luigi lock them down and debuff them so you can pick them off with archer champ Luigi.

Customization is also a key factor in making this Mario mashup fun. Throughout your space odyssey, you’ll come across Sparks (Luma and Rabbid hybrids) that can bestow powers onto your motley crew. They not only give you active powers like lacing your bullets with Fire or Shock damage, but also give you resistances and passive buffs. So if you’re facing off strong Fire enemies that can burn you, the Fire Sparks can lessen the impact and prevent you from getting the Burn status that automatically forces you out of cover. Conversely, coating your attacks with Fire can burn enemies, flushing them out of cover and making them ripe for the picking.

Mario + Rabbids: Sparks Of Hope also mixes it up with exploration segments. Each planet you visit from the forest-themed one to a ice-environment village will have its own secrets and puzzles for you to unlock. Your talking robot Rabbid companion Beep-O can be infused with different Sparks to solve puzzles. If there’s a hidden object or bridge that needs revealing, you can use Beep-O’s Light Spark gadget to make it appear. If there’s a barrier with a purple mark, break it down with a Sonar Spark add-on. Ubisoft took some cues from previous expansive Mario titles like Super Mario Odyssey and Super Mario Galaxy, make the whole thing run in 30fps, remove the jumping, and instead shove in puzzles for you to figure out. Does it sound like a downgrade? Hardly, since I usually treat these as interludes from the turn-based chibi warfare with laser guns and elemental star rabbid hybrid thingies.

That 30fps bit needs mentioning; as good-looking and charming as the game looks, it’s clear as day the Nintendo Switch hardware is showing its age. There’s a bit of slowdown going on at certain intervals, particularly cutscene transitions and the loading between the battle preparation screen and the character/Spark customization screen. Other nitpicks from my end include the unnecessary need to hold a button to level up Sparks; why can’t this be instantaneous?

The one big stinger? Mario + Rabbids: Sparks of Hope is a turn-based strategy game that takes its sweet time with its battles. The speed-up option is welcome, but when you’re playing for the first or second time, big battles between challenging bosses can take a while. At least the major ones are divided into intervals and checkpoints that you can restart from if things go south halfway. And they will, especially with the game’s Spark Hunter big baddies with multiple phases and timed segments with finite turns to complete specific tasks.

A Star Is Born 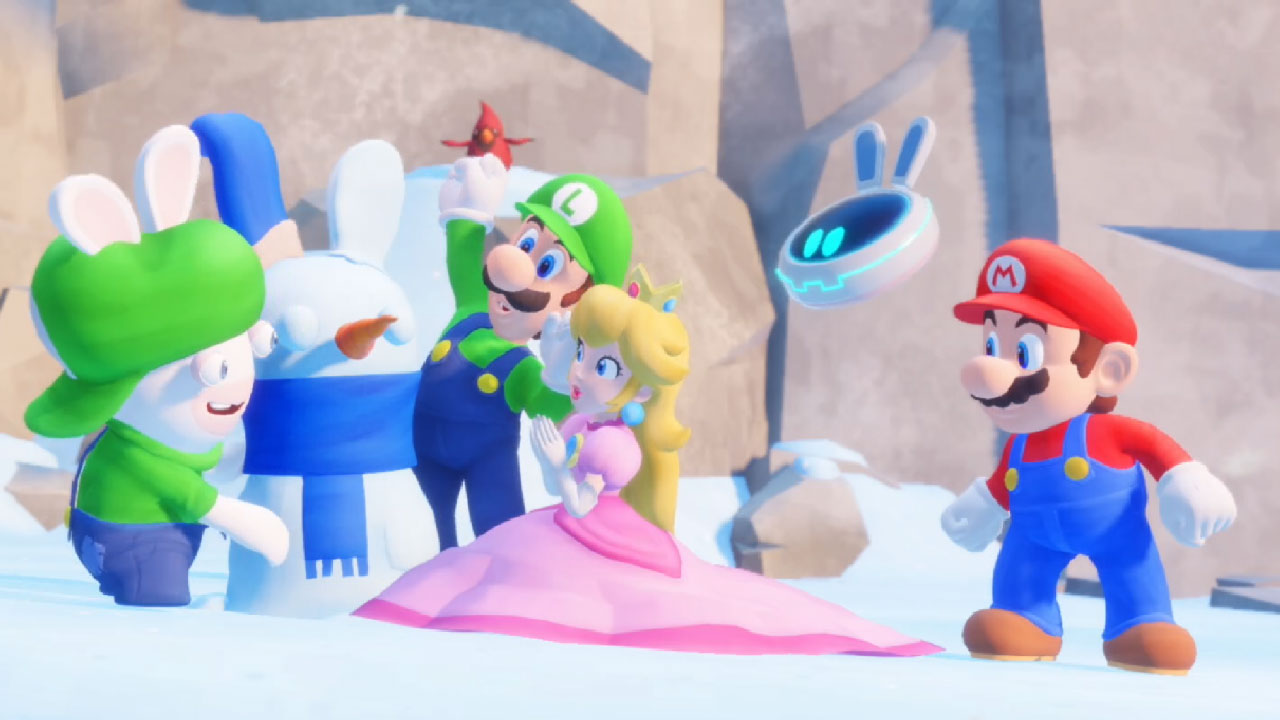 In addition to being a fun and surprisingly challenging turn-based strategy game (with tweakable difficulty options for plebs like yours truly), Mario + Rabbids: Sparks of Hope is also a lite-3D Mario game with exploration bits to make you spend more than 20+ hours in its plethora of planets. Coupled with the triple threat of fantastic music from Yoko Shimomura, Grant Kirkhope, and Gareth Coker, and you have a title that’s dripping with so much quality and care, you’d forget that it was mostly made by a company known for its cut-copy-pasta open-world games that feel hollow.

Rest assured, the Mario + Rabbids sequel is anything but soulless, though its appeal may depend on your tolerance of the turn-based strategy genre’s ever-dreary pacing and Rabbid slapstick in general.

Another month has passed, with new Final Fantasy VII Remake info being drip-fed to the gaming populace. This time, it's about bosses. Game director T...

One of the best things about being a gamer is that every now and then, we get exactly what we want. Unfortunately, sometimes there are a few complicat...

For those of you clamouring for a new Splinter Cell, here's the next best(?) thing: Sam Fisher will be a playable character in the team-based online c...