ASUS Republic of Gamers (ROG) Malaysia has officially announced the pricing and availability of ROG Phone 6D Series and BATMAN Edition for the Malaysia market. 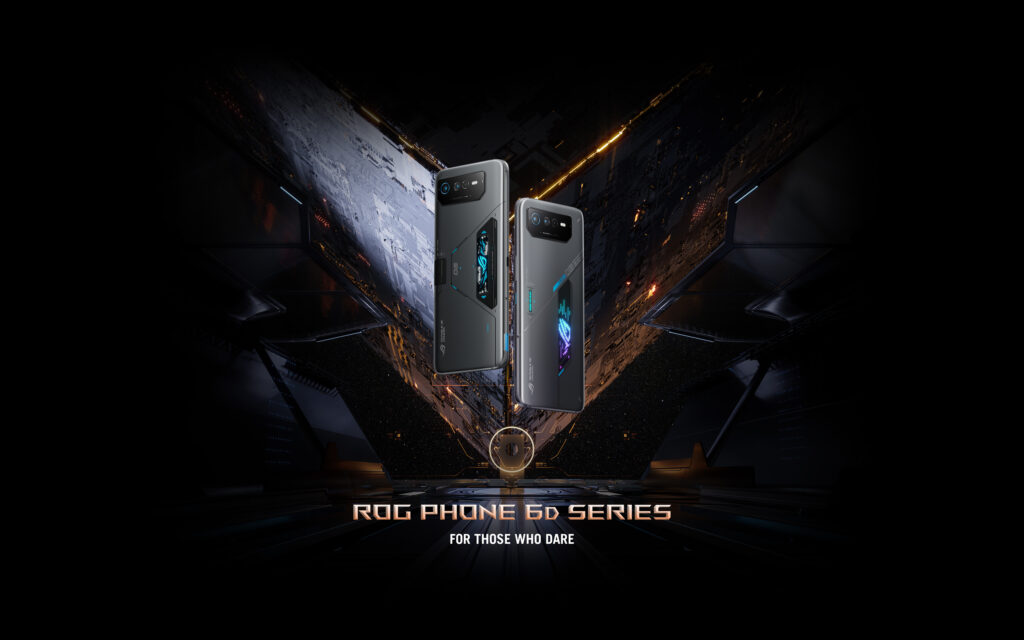 With the ROG Phone 6D’s Level Up Your Gameplay Campaign, the ROG Phone 6D is more accessible than ever with an instant RM300 rebate. Users can own the latest ROG Phone 6D at just RM3,199, simply by bringing their old smartphone to their nearest ROG Authorized Dealer and following five simple steps. This will surely enable more mobile gamers to own the awesome ROG Phone 6D for themselves.

The ROG Phone 6D series is powered by the latest flagship MediaTek Dimensity 9000+ 5G smartphone platform, a flagship powerhouse that delivers power and performance enhancements for the ultimate boost across all on-device experiences. Dimensity 9000+ offers amped-up gameplay — unleashed with the full suite of HyperEngine 5.0 features plus an improved MediaTek Mali GPU. Clocking up to 3.2 GHz CPU speeds and boasting up to 16 GB of LPDDR5X RAM and 512 GB ROM of storage, the Dimensity 9000+ chipset provides flagship 5G experiences, perfect for mobile gamers. 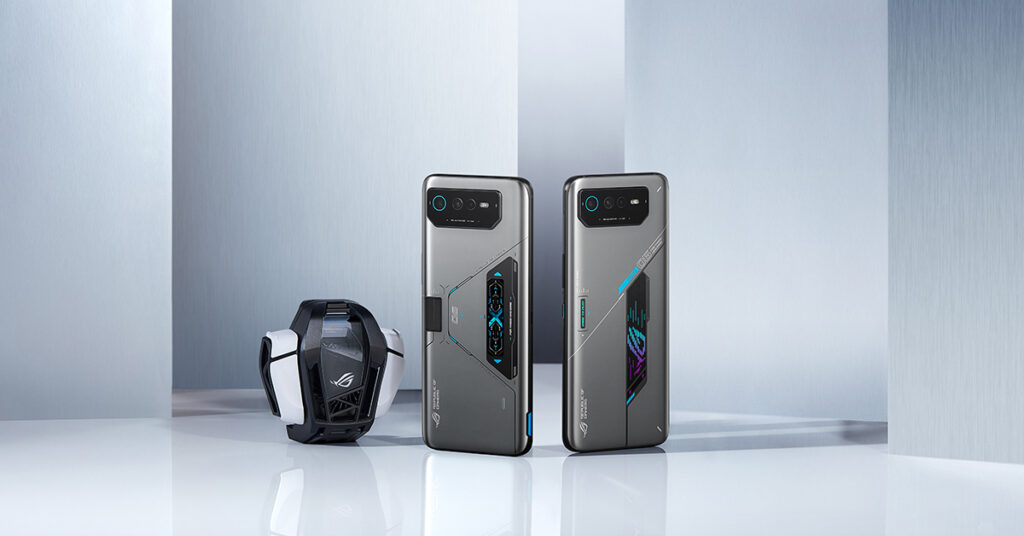 The AeroActive Portal directs a continuous high-speed stream of cool air from the outside directly onto the vapor chamber’s cooling fins, efficiently dissipating the heat generated by the SoC. This unique thermal structure maximizes both gaming performance and battery endurance simultaneously, and boosts thermal efficiency up to 20% when the AeroActive Portal is activated. 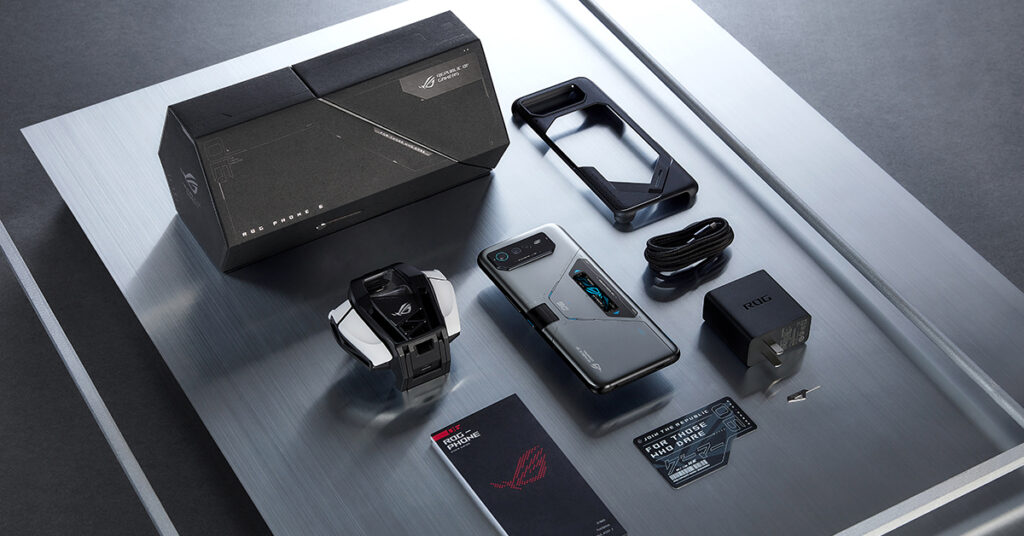 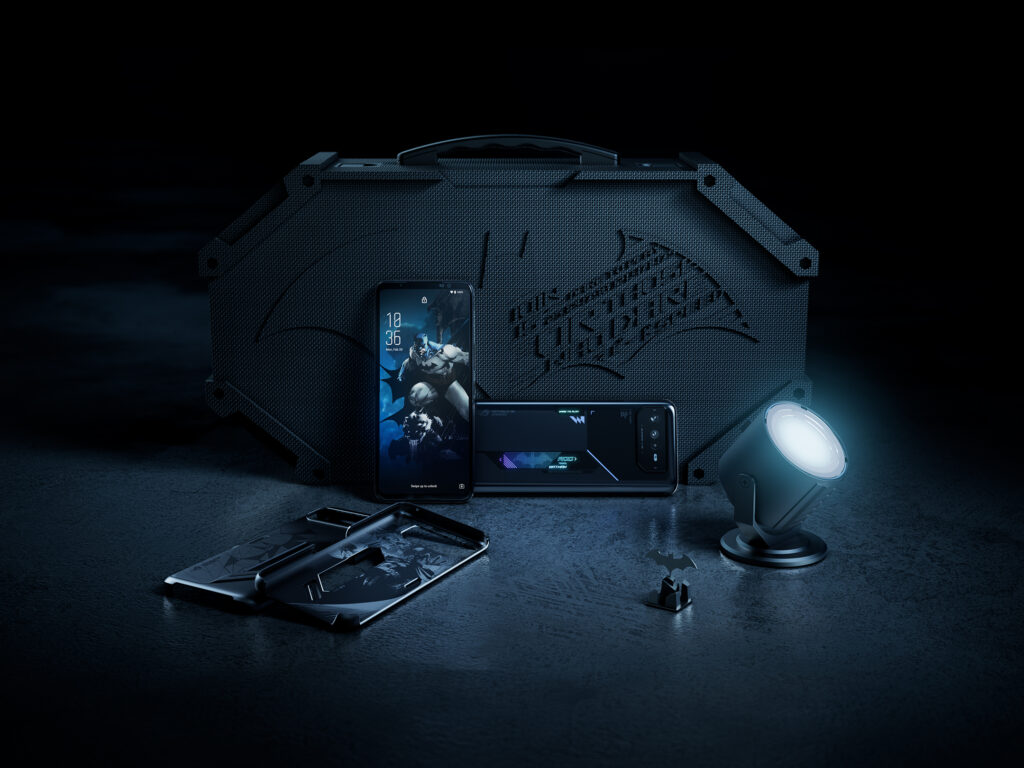 The ROG Phone 6 BATMAN Edition is an exciting collaboration that deep-dives into its subject, with the look and feel of the phone totally redesigned in honor of the mysterious, technology-loving crime-fighter. With its muted and atmospheric Gotham City Black color, mirrored product label, Batman Gauntlet-inspired graphic detail, and the iconic bat-shaped raster graphic of the Aura RGB logo, every effort has been made to capture the spirit of Batman’s universe.

The special semi-matte finish of the ROG Phone 6 BATMAN Edition, with its high-tech detailing, has been carefully designed to reflect light in a way that mimics the iconic image of the Bat-Signal searchlight illuminating dark clouds in the Gotham City night sky.

The phone also gives fans a special user experience and a custom user interface with the exclusive Batman animated theme pack. This features live Batman wallpaper and a redesigned app icon frame, and when the phone is being charged there’s an exclusive sound and animation combined with Batman-themed elements. The custom in-display fingerprint icon also means that users can unlock the phone by tapping the famous yellow Bat emblem.

Owners of the ROG Phone 6 BATMAN Edition get a special bonus with the unique three-piece matching accessory set.

At the top of the list is the Bat-Signal Projector, a miniature replica of the famous searchlight that’s used to call for Batman’s help. This LED searchlight can project one of two versions of the iconic Bat-Signal onto nearby surfaces and can be powered by a USB-C cable attached to the ROG Phone 6 BATMAN Edition.

The Batman Aero Case is a protective bumper case featuring a geometric relief rendering of the Bat emblem, created in layers for a 3D effect. The hidden inner part of the case is printed with a special ‘easter egg’ in the form of an image inspired by the Batman graphic novels.

Even the humble SIM removal tool gets the full Batman treatment: with its Bat emblem design and Gotham City-inspired desktop holder, the thoughtfully designed Batman Ejector Pin deserves pride of place in any collection of memorabilia.

To keep the ROG Phone 6 BATMAN Edition and its accessories safe from even the toughest supervillain, a custom storage case is supplied. This sturdy, one-piece water-resistant case is made from expanded polypropylene (EPP). Its appearance is based on military-style suitcases, and there’s an embossed Batman logo stamped into the lid.

There's a lot of talk going on about Diablo Immortal. No, not so much its fun mobile action RPG gameplay, but rather the endgame cost that's potential...

Bungie said before that its upcoming Destiny 2 expansion The Witch Queen is slated for a late 2021 release. However, the company is pushing the expans...

News
Blizzard Is Selling Special Celebration Collections Ahead Of BlizzConline 2021

The champions of Azeroth, the defenders of Sanctuary and the Koprulu Sector, and the heroes of Overwatch and the Nexus are invited to a virtual celebr...