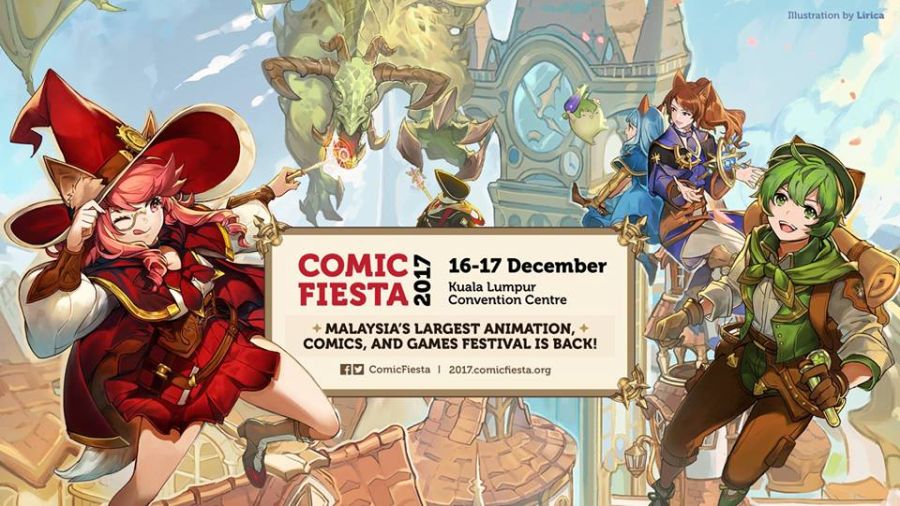 Malaysia’s largest comic market will be opened in 24 hours time. Even as many are preparing to spend their entire weekend and a lot of their savings at this mega-sized anime, comics, and games spectacularÂ â€“ here’s a refresher course on what to do and look out for.

Once the doors open for Comic Fiesta 2017, which is held from December 15 and 16 2017 at KL Convention Centre (KLCC), it is as if the floodgates have opened. Fans will pour in and it will be a spectacular sight as they rush all over to their chosen zones within the event space. Word of advice: don’t run or be overwhelmedÂ â€“ just breathe, take in the experience in slow motion, and enjoy the experience.

Now first, check the event map first. Always, ALWAYS, do that. Here’s the handy image from the Comic Fiesta Facebook:

And the schedule too!

The horde rush, as the organisers are prone to calling it, will split and move to their respective areas of interests. As usual, the highlightsÂ â€“ comprising the comic market, VIP cosplayer, special discussion panels, and major eSport tournaments, are proper attractions. This, of course, is capped off with ever-popular late evening concerts.

One can swing over here to check out the major highlights for Comic Fiesta 2017.

While there are so many events to consider, what does one look forward to Comic Fiesta this year?

Most critical of them all, before going into the breakdowns, are the VIPs for this year’s event. The images below will speak for themselves:

Then there is the art gallery area where the Comic Fiesta 100 Days Countdown is on full display. This, by far, is the only other art aspect of the event, so nobody should miss it!

Now for the other highlights:

First, the comic market and vendor areas. With the former, it’s the first stop for any veteran attendees for this event. This main-stay aspectÂ â€“ the bread and butter for Comic FiestaÂ â€“ gave meaning to it as there are no such activities prior. It is the other anchor aspect for art and creativity, so it is a must-visit for all.

The vendors, which consist of industry, commercial, and government sectors, are the ones who empower the event. They trickled in initially to learn how they can fit and came in droves once they understood the event’s potential.

Second, the ‘Creative Factor’ segments. Originally a bunch of panels peppering Comic Fiesta during its early years, it evolved into a proper two-day industry conference. Every year, since its inception, it turned into a major draw for creatives who want to learn from some of the industry’s best.

Third, the eSports activities that has anchored itself at the front doors of Comic Fiesta. Being focused wholly on indie comics, anime, and videogamesÂ from the start, this inclusion is very logical for Comic Fiesta. After it first appeared, this aspect became a major calendar event for major games tournament. Besides League of Legends, there are two Capcom-powered bouts taking place as well along and a huge collection of mobile and indie games developers are showcasing their works as well.

Just as massive, and only second to the comic market in popularity and size, are the evening festivities on both days. Introductions are not necessary for this as it’s pretty much a straightforward concert and music festival that caps-off Comic Fiesta.

Oh, there are plenty of cosplay activities as well – cosplay idols included! Here is a teaser of what is in store:

There are loads to see and do at this year’s comic extravaganza. Just make sure to drink plenty of fluids and be prepared for gridlock crowds. Enjoy the weekend with all these fun-filled activities and keep safe!