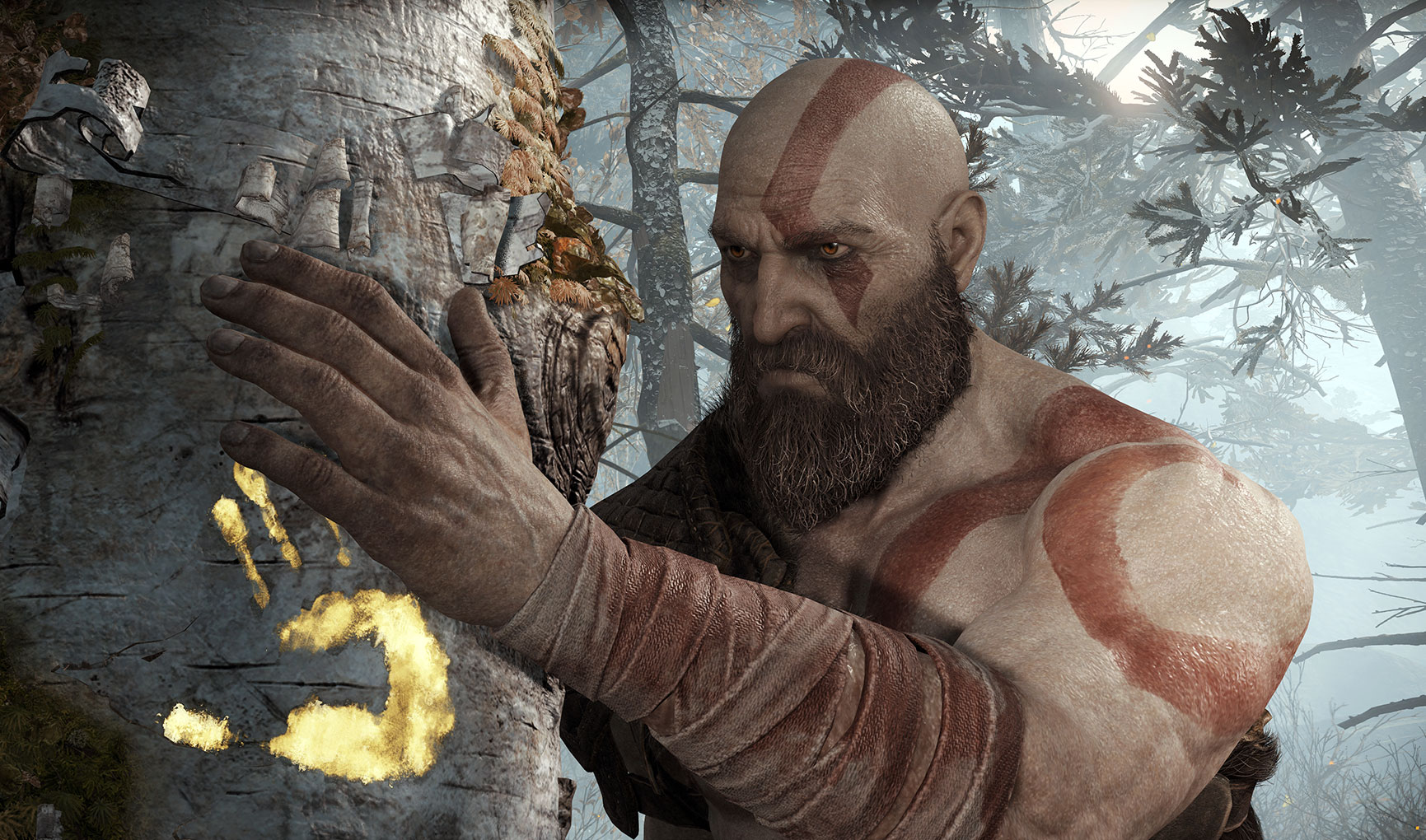 I remember the days when former director David Jaffe was hyping up the first God of War for the PS2 on magazine interviews. And by god, it delivered: high octane action, a Greek tragedy of a tale, and great action/level design beats. Then part 2 came in and it was more of the same. The story went off the rails a bit and Kratos was seen more as a comical anti-hero than anything.

Part 3 was when it jumped the rails, the 10 sharks that were under it, and went off to Crazy Town space land in terms of absurdity and over-the-top-ness. Which was fine from a gameplay standpoint but it’s really hard to relate to Kratos now; he’s just a ball of angry and rage-induced madness without wit or self-realization. Developer Santa Monica toned down the character’s amoral tendencies in God of War: Ascension, but I don’t think many people played that game. Ditto for the PSP games.

6 years and a new PlayStation console later, Santa Monica will be bringing back the series with a new Norse Pantheon setting for Kratos to wreck havoc in. But wait: he has a son? He is actually a shadow of his former angry self? He’s living in an isolated shack where his son grows up in peace? We’re actually asked to give him a chance and relate to him now?

What happened? And why do I feel a small tinge of relief at this development?

Corey Barlog, director of the new God of War(and Santa Monica Studios old guard since GoW 2) said that the revamp is getting back to the violence and action of the first series, but now there’s a new father-and-son element to it story-wise.

“The team needed to give Kratos a better character arc than he did in past God of War games, while also preserving the visceral action.”

It’s hard to believe, yes, but you can believe that the guy who murdered the entire Greek Pantheon and killed innocents to solve puzzles can be redeemed.

Santa Monica Studios’ Senior Community Manager Aaron Kaufman, who we met during a God of War playthrough session in Asia, said that there are still fans who want their God of War to be the same it’s always been.

“But as game devs, we learn from our past. We did our research. People wanted to see an evolved character. They cannot relate to a vengeful angry parody of an anti-hero.”

Having heard all this, do we have an axe to grind with the new God of War? Well, After playing through 2 and a half hours of the latest build, we had our previous viewpoint slightly adjusted. This might be the wake-up call the series need, though it is not without its possible hindrance. Let’s focus on the good first:

A Story Worth Fighting For

Long story short: Kratos and his son Atreus have to take their mother’s ashes and disperse it at the top of a specific Norse mountain. Within our playthrough of the game, we went from some backwater taiga to an ancient Norse ruin filled withÂ DruagÂ undead, and then to a colourful Norse forest where the demo stopped.

“From a character standpoint,” said Kaufman, “we gave Kratos a new world to be in and an emotional core in the form of his son Atreus. It comes with its own conflict and drama. We add some new twists and turns in the Norse mythology the world is set in.”

And it’s this kind of narrative that takes the duo to many colourful Norse places. By golly, this game is making full use of the PS4’s graphical processing. Everything here is a lovely snapshot, be it a quarry-like zone with monoliths of Nordic runes to the aforementioned colourful quadratic assault of blue, red, brown, and orange foliage and flora. This is the title that will make you consider upgrading to a PS4 Pro. And maybe get a 4K TV since they’re all less than US$1000 nowadays.

We’re not just getting a story overhaul, but a more revved-up combat system using a close third-person camera. The hyper-violence is still there, but it’s a little less over the top and more brutal neck-snapping and slashing dead people to bits. You even get to punch a revenant -a floaty annoying shrieking thing with long-ranged attacks – multiple times before snapping its neck to finish it off.

And lest we forget, after 20 minutes of story and combat tutorials, we get an epic fight between Kratos and a rune-tattooed hobo called The Stranger who basically can punch through cliffs and rocks in a 3-part battle that sets the stage of the rest of the game. It’s a lovely battle that will test your reflexes and blocking, because you will die from three to four hits -even less on harder difficulty settings- if you don’t master these quick.

Kaufman said that the team has not forgotten its God of War heritage and roots. “On our development team, we have [veterans] Jason McDonald and Derek Daniels; these guys are part of our combat design team who were there since God of War 1. That’s why it still feels like a God of War game, but with a perspective twist.”

“We don’t want fans of past games feeling like we forgot them. When you have the axe, it still feels like you’re holding the Blades in a way; feels like a more evolved weapon. The shield/parry is reminiscent of the golden fleece parrying mechanic in God of War 2.”

With a new game comes a new weapon: the Leviathan Axe in favour of the series’ trademark Blade of Athens. Kaufman said that the axe symbolizes a new change and a rebirth.

“We see the axe as an iconic weapon. GoW is good at creating a weapon that no one ever lets go of. The irony is that we do let you let go of the axe at times (while the Blades of Athena are chained to you). It opens up the combat so much. Now you can throw the axe, bash frozen enemies with their fist, with Atreus by your side with arrows.”

The axe is also a great long-range weapon to pick off foes from a medium distance, freezing them in place so that you can go up close and beat them up, or shove them to a wall to crush them.

The weapon breaks free from the shackles of past games, just like how Kratos forsake the chains of the Blades in favour of the Leviathan Axe. Just going back to the blades mean that the series may not evolve beyond its fun-but-tired past.

The Menu has different skills and skill tree stuff to upgrade your Axe, and even other weapons and Atreus himself. You can either make the Axe freeze in place at its target longer than usual, or have its return trajectory arrive faster and deal more damage. You can even give Atreus more arrows to shoot, or even give him the ability to stun and juggle whoever you’re waylaying.

It isn’t super-huge, but it’s enough to give you a good amount to realize the Axe’s potential. What it lacks in style it makes up for it in functionality and brute visceral force.

In short, this adds a lot more because now you can have different playstyles. You can either focus on just the axe, the melee & shield, or on the rest of Kratos’ armaments like his armour and even Atreus’ skills down the line. The most important takeaway from all of this is that the controls, the feel, the movement, everything: it just clicks. And it looks damn good and stylish doing so.

Just getting your axe back when you recall it, and simple parries and blocks from enemy lunges and swings:Â  this is really an action game magnified by the console it’s on and the experience the dev team has accumulated since the late 2000s.

Now here’s where the game gets very, VERY divisive.

When you think God of War, you think these crazy setpieces, large-scale action scenes, and camera panning to showcase the scale and spectacle of an anti-hero against all godly odds.

The new God of War’s unhinged camera sacrifices grandeur for intimacy and “up-close” fighting. Yes, you’ll still fight a giant troll or two, but the intensity of the action is a lot less obnoxious and ridiculous. You will actually be more impressed with how much the team restrained themselves while also giving us a new way to appreciate this new viewpoint.

It’s like watching the last fight between Rocky and Apollo Creed in both Rocky films in a closer perspective. Every punch thrown, or axe slash in this case really feels like it hurts. All great action games give that feel for even the lightest of attacks; God of War has that.

Having said that, it can be hard for some to play it for prolonged hours. While the fixed camera angles are to show off the spectacle of the game, it also means that the camera won’t be bobbing as much. Here, even the slightest of jolts can be a tad unnerving after long hours of play. The same can be said for third-person shooters, but your reticule is usually targeting enemies from far away, with rare melee encounters. Since God of War features a ton of close quarter combat, the perspective might disorient a lot of people.

Sins Of The Forefather

Aaron believes that the fans will buy into this mindset of a new kind of God of War. “If we’d made the same game, it wouldn’t feel like an evolution in character and gameplay. Hardcore players are going to have some commentary at the beginning of the game; the first 20 minutes. But as they play more of it and get used to the combat, it feels just as strong and we won’t be hearing or seeing many amounts of complaints.”

“We had to take this bold step. We can’t make the same game again and we want new God of War fans coming in. We didn’t just make it for just fans; we made it for possible new fans. We want people to keep focusing forward; looking ahead, look at that mountain [to finish his mission], how Kratos can make his son a better person than he was.”

On the flip side, it is rather hard to feel sympathetic for a guy who gave us such tender and heartfelt gems like this…

…and this climactic finish to a trilogy known for its heartfelt plot.

The devs might be grasping at thin straws here if they want to redeem someone like Kratos.Â Maybe there’s a heartfelt surprise waiting for us at the 10th or 12th-hour mark. Maybe not. In any case, April 20 is when we find out if God of War has really grown up beyond upgrading its protagonist from his petulant angry man-child roots.

Want to see the game in action? Check out our Quick Slice video of the new God of War in action on Kakuchopurei.Â

Here's Why You Should Reconsider Buying The PS5

by The New God of War Is An Action Adventure Epic For The Ages – KAKUCHOPUREI.COM in April 12, 2018
Reply

[…] And here I thought that there isn’t any way to redeem such an angry sack of sh** like Kratos. You know, the guy known for his misadventures in the Greek Pantheon in the previous God of War games. […]

[…] about point (b)? We have mentioned before that the current God of War director Corey Barlog has been working on the series since the first game. The combat designers too; they’ve been […]